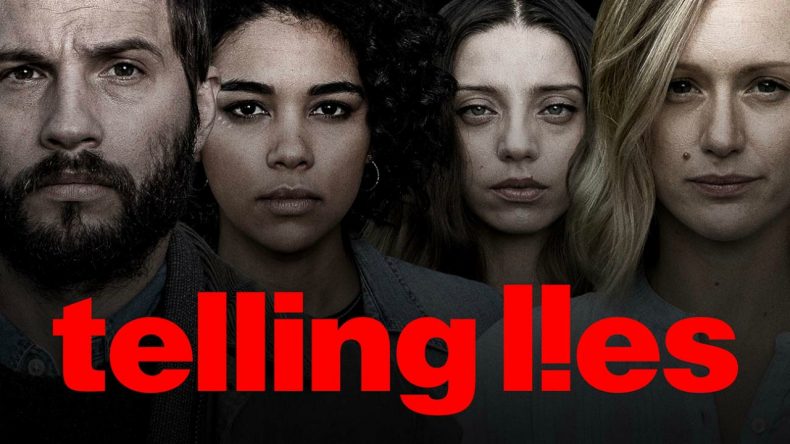 We’ve all told a lie at some point right? Like, recently I bought an Apple 4K TV on credit and didn’t tell my wife, instead just letting it slip into the living room like some covert Alexa (sorry, hun). The thing is, we all know that lying is wrong, yet we do it instinctively, it’s a defence mechanism, for others it’s a living, for Donald Trump and Boris Johnson, it’s a way of life.

In 2015 Sam Barlow distanced himself from Silent Hill to create Her Story and brought us a narrative video game unlike any we had seen before. The question was how would he fare with the often tricky second album? The answer is here with Telling Lies, a similarly structured narrative adventure focused around a man and the relationships he has cultivated around him. The thing is, it’s really hard to talk about a game like this without giving too much away, but I’ll try. Anyway, like Her Story we find ourselves sitting at a computer terminal in the shoes of an as yet unknown protagonist as she pores through hours of video footage to find clues as to what exactly has happened in the lives of these people. As you watch the videos and read the subtitles you’ll focus on words within the text and typing these into the search bar brings up more video clips; some of these are much more revealing than others.

Let me just state for the record that you do not need to watch all the video footage to suss out what’s going on, although it may take you some time to piece everything together. I have a list of ninety-eight keywords to search up and I have made it through forty-one before I triggered the credits sequence; for others this will be very different. However long you want this game to last is up to you, it all depends on how much of the six hours of recorded video you want to go through before you decide to do what the game requires and finalise proceedings.

We eventually find out the man’s name is David, and we meet his wife and child and find out that he’s currently living away from home due to him working on a project for his employer. While he’s living away David is understandably lonely and takes to chatting to his wife and kid via webcam. However, it’s after those people have gone to bed that we see David’s lonely dark obsession of talking to a cam girl, and there are several moments within the footage where I didn’t feel very comfortable with what I was witnessing. Yet, it isn’t even guaranteed that you will see the same stuff as anybody else. Such is the open ended nature of the investigation work that you can literally bypass a load of the story on your path to the ending, yet still wind up with the conclusion that the game always intended you to. In the early stages there’s so much open to interpretation about David, his wife, the cam girl and the other people we meet through the clips, I must have thrown out about five different possibilities as to what was going on before the game came to a sudden stop I wasn’t quite expecting and some shocking revelations came out. This is surely a sign of excellent storytelling design in ensuring everyone can find out what’s going on yet everyone can still see something that their friends haven’t.

Because this is based on webcamming there is one glaring weakness in how this is structured and that’s through the one sided conversations each clip shows as taking place. All the conversations can be paired up, and for the most part, searching for the right key word will bring them side by side for easy pairing. But, why these videos aren’t already paired up to begin with is a mystery to me. I get that in a way this is a measure to elongate the game’s run time and make you put in extra effort to find the conclusion, but it wouldn’t suffer for video pairing at all, if anything it’d benefit from it.

The reason why this would benefit is solely down to one thing: uncomfortable silence. A lot of the clips are quite short, while some short ones are actually cut down versions of longer ones which can be viewed in their entirety should you search for the right key word – the problem is that some of them are six or more minutes long. Do you see where I’m going with this? No? Ok, so, in a conversation someone talks and the other person listens, as a result one of the parties is being quiet, this means that for much of a six minute long video you get someone staring at a camera listening intently to the point you start to wonder if you’ve missed the fact that the video had already ended (hint: it hadn’t). Considering this is the only real gripe I have with Telling Lies is a testimony to how good Sam Barlow and the team at Furious Bee are at spinning a psychoanalytical yarn. The characters here are well fleshed out and actually feel real; it’s like being in The Truman Show or a soap opera you didn’t know existed and that you are a participant in. As you study the clips and make note of the words you might need to revisit you can’t help but get drawn in to the web of deceit but also feel empathy for those involved. These may just be actors but their performances evoke very real emotion in the viewer, and for that everyone involved in projects like these deserves all the plaudits we can lay on them.

I guess it stands to reason that if you enjoyed Her Story then you’ll be right at home with Telling Lies, but (and this is a big but), many people will scoff at something like this for not being a “real game”, but you shouldn’t dismiss it so quickly. Doing yourself out of an incomparable narrative experience doesn’t make you any more of a gamer than anyone else, and learning to experience different things such as this can help you grow and appreciate the other games you play more, so stop lying to yourself and try Telling Lies, I promise, it won’t hurt.

Lack of conversation netting results in a lot of uncomfortable silence

I won’t tell any lies here, Telling Lies is another excellent piece of narrative game design from Sam Barlow and I sincerely hope there’s more to come