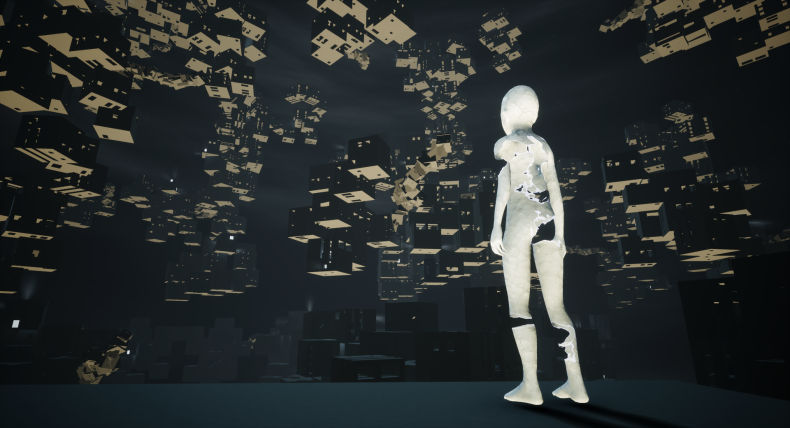 We all have that one thing we’re scared of, or at the very least unsettled by. Usually they are a remnant of a childhood fear or something that happened as a child that has stuck with us. The Inner Friend, developed and published by PLAYMIND, dives head first (literally at some points) into some of those childhood fears. While the reason for exploring the fears of the main characters isn’t clearly explained, they are pretty self explanatory and common for kids.

The Inner Friend opens with a man writhing around on his bed; his face replaced with a white light. A prompt appears on screen to use the left stick to bring us closer to the figure to the point we enter this light. You then take control of a child-like figure, as the main character in a representation of their childhood bedroom, and begin to face the aforementioned inner childhood fears and memories. The bedroom acts as the main hub for The Inner Friend, with the room evolving to show off different interests and parts of the characters life after each level. You’ll also see some greyed out objects that represent collectibles hidden through each level, so to manage a completionist run you’ll need a keen eye.

There are nine levels, each showing a different childhood fear or memory ranging from school and being scared of the teacher, to a hair salon complete with a monster chasing you down with a giant pair of scissors. Each level has a different horror and/or puzzle aspect so you won’t come across anything the same, keeping things fresh in your playthrough.

And there’s the opportunity for multiple runthroughs, here, as The Inner Friend is an extremely short game. It could easily be completed in about an hour if you chose to ignore the collectibles. If a completionist run is up your alley it won’t add a massive amount of time to the run as there aren’t any puzzles or conditions to meet to find them. It’s as simple as having a look about and trying to find anything that stands out. The Inner Friend is a horror game first and foremost and it does a really good job in that respect. Most levels look dilapidated and fit the horror aesthetic. That fact, coupled with the amazing use of sound makes it suitably creepy and rather unsettling. I’d recommend headphones to get fully immersed and take advantage of the binaural audio.

As with any horror game worth its salt, this one includes a fair share of monsters. While naked and a little weird (actually everything is naked for some reason), these monsters really fit the horror theme. The fact they are all incredibly creepy could be my own hang up, as things not having a face is something I really can’t get on with: cheers for that PLAYMIND. Anyway, they fit really well into their levels and the fact you can do nothing but try and escape or avoid them adds to the horror.

When you’re not attempting to get away from monsters there are a couple of puzzles you’ll come across. These aren’t the most taxing puzzles you’ll ever come across but it’s a nice change of pace from facing a monster. However, The Inner Friend has a few issues that unfortunately ruined my enjoyment slightly. Firstly, the movement is incredibly stiff and slow to respond. This is even more obvious in a Hair Salon’s chase section and the platformer-style sequence in a Hospital level. This Hospital level contains a part where you need to jump between beds. At a certain point these jumps need to be timed between moving beds, which is where the problems arise. The time it takes for the character to respond to the input being so sluggish meant multiple restarts which was frustrating to say the least.

Secondly, I came across a bug where I would load into a level only for the game to become totally unresponsive. The only solution was to exit completely and boot up from scratch. This only happened a couple of times but it takes you right out of any atmosphere that’s otherwise expertly built upon. Finally, although it isn’t a deal-breaker (though it’s frustrating, for sure), is the lack of an explanation. There’s no real reason as to why these events are happening and the ending only really provokes further questions. So, yeah, consider this a heads-up that you will get no explanations for anything, but I suppose it does give you the opportunity to provide your own narrative.

The Inner Friend is worth a go if you’re looking for a creepy game to keep you busy for a little while. Diving into the world of childhood fears is an interesting concept and it might even resonate with a few people. While it likely won’t give you weeks of night terrors, the use of sound for its atmosphere is really well done.

The Inner Friend is a decent horror and while it is incredibly short there is enough variety to keep it interesting. It does have a couple of issues but it is saved by its interesting look at childhood fears. It’s a good way to spend an afternoon.