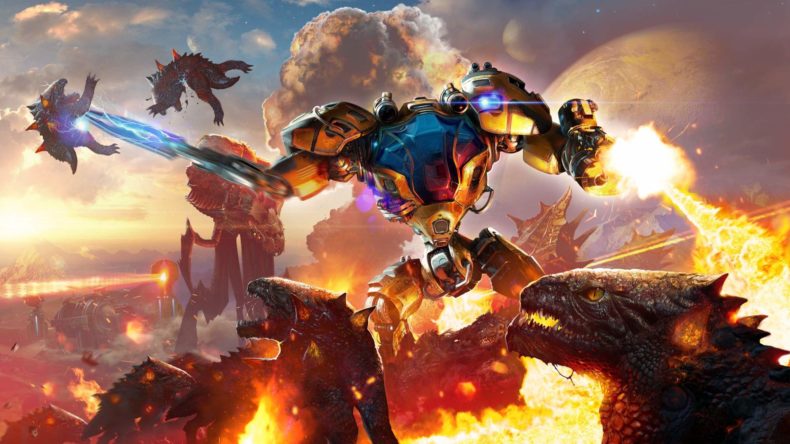 Imagine having the technology to create a one-way teleporter to the far side of the Milky Way. Picture then using it to send an advanced scout in a highly advanced AI mech suit to build a gate on the other side through which to transport colonists and research materials. Imagine that the world on the other side is unbelievably beautiful; a cornucopia of resources, alien fauna, and life-altering flora. Now envisage strip-mining the ever-loving shit out of it, massacring thousands of indigenous lifeforms and tearing up miles and miles of untouched rainforest. Welcome to the Riftbreaker, where humans are rubbish.

Jokes aside, though, the premise of The Riftbreaker may be morally questionable in the real world, but for a video game it’s the perfect framework. As Ashley Nowac your job is simple, though far from easy. You’re on Galatea to construct a Rift Gate that will allow humanity to spread itself further across the galaxy. At one point though, Ashley says to her AI mechsuit Mr. Riggs that humanity isn’t even in danger. There’s no urgency here. It’s a line that stuck with me, because I automatically assumed the colonisation was a desperate attempt to save the human race. It’s not, so I feel like you could probably accomplish this goal without reducing vast tracts of woodland to ash. 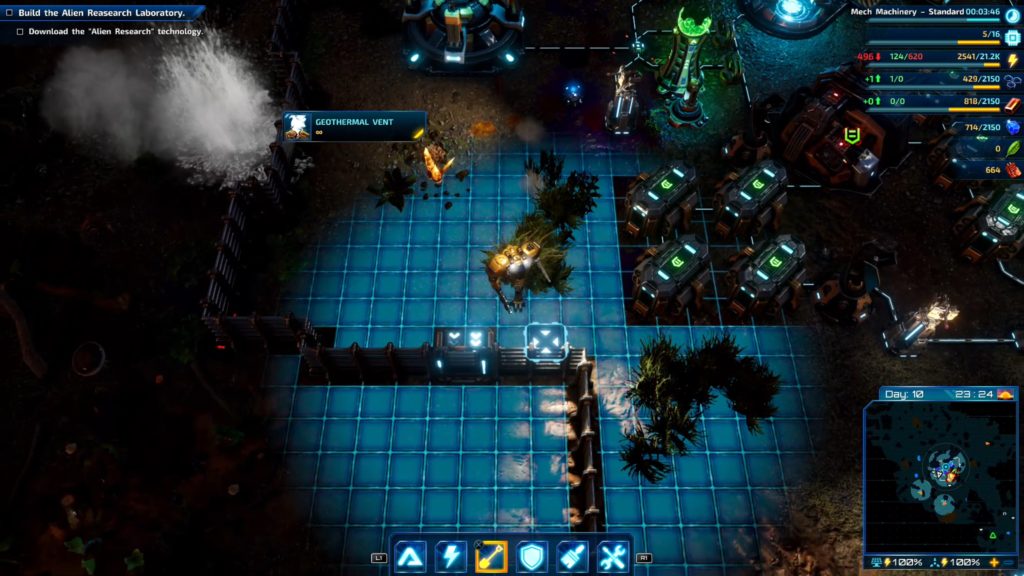 The Riftbreaker is a fairly unique game, though. While you’ll have no doubt seen its mechanics at use elsewhere many times, few titles have successfully combined all of its many elements. It’s at once a survival sim, a base-building RTS, a tower defence game, and an action-RPG.

CHECK IT OUT: Everything you need to know about Battlefield 2042’s Hazard Zone

Upon reaching Galatea, your first job is to find Carbon deposits to construct a base. From there you’ll be looking for steel and cobalt and various other resources. You will need to erect power supplies such as solar arrays and wind turbines, defences like cannons, walls and repair towers. As the game progresses you will research and develop new buildings and technology, with the ultimate goal being to the construction of the Rift Gate itself.

However, this wouldn’t be an RTS if the entire planet wasn’t working against you. At first, your primary worry is the encroaching swarm of canine-like aliens that you’ll mow through without breaking a sweat. The countryside will be smeared with their well-stomped entrails, as you construct strip-mining facilities and storage centres to hoard minerals and plant matter and meat. Unfortunately, the alien life continues to get larger, harder to kill and more aggressive as the days go by. 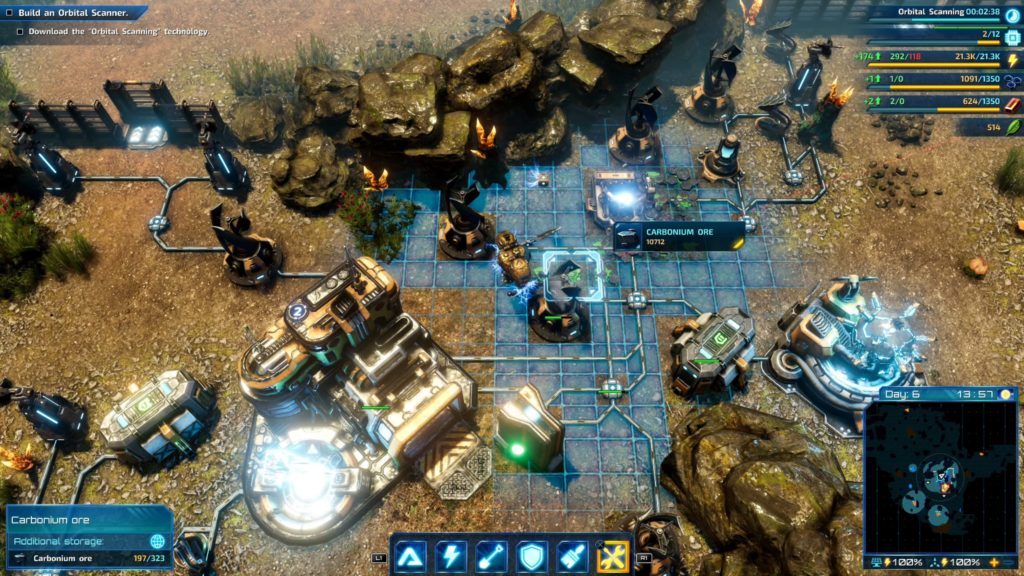 You are constantly preparing for the next attack, frantically repairing damaged buildings and defences. Quite often you’ll be given a 2-minute warning before an attack hits you, but in the later game they’ll often come from two or three fronts. Some of the aliens go down easy, others are hulking armoured killing machines. Now and then, it feels like you’re not given time to recover from one attack before another is announced.

As you wander the wilds in search of minerals and secrets and abandoned alien technology, you’ll find packs of hostile fauna. Sometimes Mr Riggs will send you to find a nest or destroy a rampaging monster. At other times you may need to seek out alien ruins or other points of interest. Thankfully you can teleport back to base to heal, and you can construct additional portals all over the map.

CHECK IT OUT: See our Monster Hunter Rise PC vs Switch comparison video

The RPG elements come into play as you unlock new tech. The three research trees are huge, and enable you to craft new guns and weaponry, special armour, even moves like an evasive dodge-roll. There are so many new buildings, items, and skills to unlock that it will take hours and hours to attain everything. 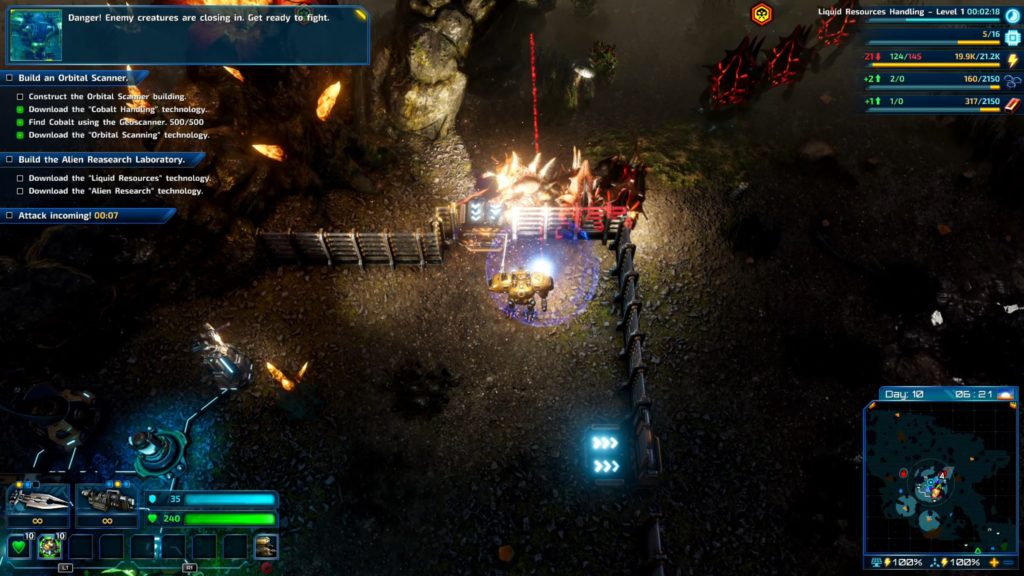 Perhaps surprisingly, The Riftbreaker has only two end states. You will either construct the Gate, or your base will be destroyed in the process. Every time you die you’ll respawn at the Headquarters, the only penalty being having to reclaim your guns. As long as that building survives every encounter, the rest is just a war of attrition. You’ll build and improve defences, and the planet will repeatedly try to kill you.

If it’s not alien swarms, it’s the weather. High winds increase your turbine power, but low winds are no good. Heavy rain or nightfall renders your solar panels useless. Resources run dry, forcing you to relocate your harvesters, pushing you further and further afield. Meteor storms can be utterly devastating at any point in the playthrough. Each biome and all these effects are procedural, so you’ll never know exactly what to expect.

One thing that remains constant is how beautiful The Riftbreaker is. It’s a stunning game, with bright neon flora, colourful alien life, towering crystalline rock formations. The landscape is a riot of colour and style quite unlike anything else.

The Riftbreaker is a genuine challenge though. One minute you’re wading through floods of enemies with an 8-foot titanium broadsword and a flamethrower, the next you’re desperately trying to rebuild defences before a meteor rain obliterates you. Ashley and Mr Riggs will warn you of impending danger, and quip back and forth between expositional dialogue. It’s not the best script or delivery, but it’s passable.

CHECK IT OUT: The 10 best Dreamcast games of all time

My only real issues stem from the port itself. This was built as a PC game, and so even playing on PS5 I’m stuck with a rather clumsy cursor. The building placement suffers as a result, and it’s easy to accidentally drop things in the wrong place. You can’t undo drops without actively selecting the demolish icon, either. The autosave also causes the action top pause for a few seconds every time, which is annoying more than anything.

As a hybrid title, The Riftbreaker succeeds in most areas. The Survival mode feels almost pointless, though, as the end objective is the same and it just shifts around a few parameters each time. The campaign, however, is superb. Yes, the challenge is pretty steep, but perseverance will get you through in the end.

The Riftbreaker is a genuine challenge throughout. The world is beautiful and the campaign is superb.

The Riftbreaker is a new RTS/RPG hybrid, and it’s great