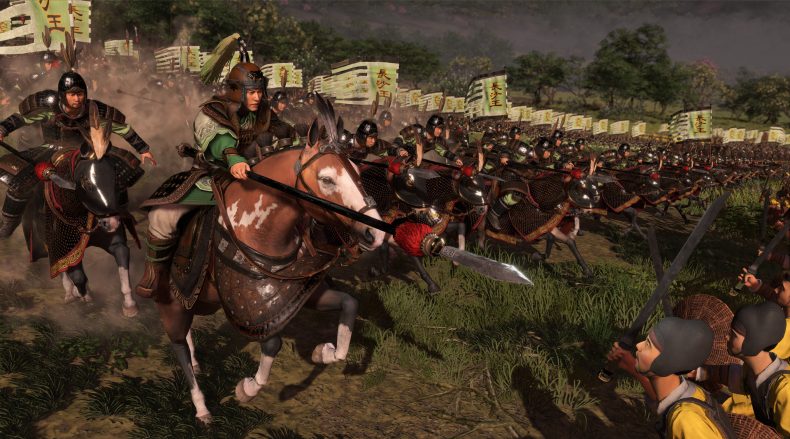 Total War: Three Kingdoms was all about the people. It had relationships, alliances, disagreements and betrayal, giving a different backdrop to the Total War experience. You cared more about the individuals involved, and your foes were real people rather than fodder for your army. Sections outside of the intense and enjoyable battle scenes became almost as fun as the bouts themselves.

No surprise then, that the meatiest of the DLCs released for the game thus far should have a focus on people. It places more emphasis on your decisions and the role they have in the brand-new campaign story. Set 100 years after the main game, you control one of the titular eight princes. Your aim is to attain power either by siding with the Emperor and Empress or plotting to overthrow them.

A lot was done to aid characterisation in the main game. But the fact that this time around you’re competing against other princes for supremacy intensifies the feeling of competition. Winning isn’t just for bragging rights, but because you can’t let the other smug princes get there first. The new opening cinematic does a great job of subtly staging this new competition. It also introduces a new ruthless central character, the Empress. She’s a nasty piece of work, and grabbing power from her either by stealth or force is a pleasing outcome. Of course, unifying China is important, but imagining the look on her sad, screwed up old face just felt more satisfying. Your path to such success has changed in the DLC with the four alignments of Wealth, Mind, Spirit and Might. Each story decision you make is intertwined to one of these alignments. Different choices will give you a boost in a given alignment, which then level up and deliver certain perks. Mind alignment, for example, will be the more thought-provoking choices, and levelling up in this alignment will see you gain perks in research and experience gains. Having different levels of certain alignments will also unlock future decisions and outcomes in the Campaign’s story.

In practice, this new system works quite well as it offers players a choice. Do you choose the best outcomes in isolation or play tactfully to level up desired alignment perks?. It gives a decent level of replayability to the Campaign mode too as different choices will yield different experiences. Also choosing which of the princes to play as will unlock special units, perks and play styles unique to each one. This means you’ll need to adapt your approach to win with each of them. And in a game that for all its successes, can become repetitive, these are welcome ideas, to keep the 8 different potential campaigns fresh.

Campaigns play largely the same as the main game, although there have been tweaks to make certain aspects smoother. Reforms, for example, are simpler than the main game, with a much more straightforward layout. Additional Reforms are unlocked as you upgrade your Faction Level, which has been tweaked in line with your princely ambitions. Advanced Reforms now also take longer to execute before another can be completed. So choosing which to pursue now feels more weighty and considered than the main game. The wildest update, the new Dynasty mode, is actually separate from the Eight Princes Campaign mode. Musou fans will be right at home here as Three Kingdoms does its take on the Dynasty Warriors series. You choose three heroes in a horde-style arcade mode to take on waves of enemies, to try and survive up to 30 rounds. Heroes that survive rounds accumulate points to spend on new abilities in preparation for the next onslaught.

I’ve always been a fan of Total War’s Romance mode of powerful generals supporting in battle. It’s more glamourous than the realistic Records mode with each fighter equally as pervious to a blade. And thankfully Dynasty Mode takes the best bits of Romance Mode and dials them up to eleven. At the click of a button, your heroes can unleash deadly attacks to destroy scores of foes at once. And there’s something very cathartic about seeing an enemy group destroyed in a single strike. If you get your heroes cooperating, and combining attacks, you’ll see off swarms of enemies with ease.

The top-down camera from regular battles is back, and the minimap shows the direction of oncoming attacks. I often wished for a fixed camera behind my heroes, as you would have in a Warriors game. I yearned for the control you get from a stable camera position, being able to accurately unleash attacks. But this may have been confusing whilst switching between heroes, and the AOE reticules do a good job of targeting your abilities. But the biggest downfall of some Musou games occurs here as well in the repetitive gameplay on offer. Rounds last several minutes with none of the perks you can earn in between feeling particularly game-changing (with perhaps the exception being the healing perk). As such, often you’re simply going through the motions rather than really getting stronger. And the 80 or so minutes it could take to complete the 30 rounds end up feeling a bit of a chore after a while. This is a big shame given how good it feels to lay the smackdown on a load of enemies at once. Dynasty mode certainly isn’t a bad addition and definitely is a welcome change of pace.  However, it will likely only serve as a temporary stopgap to the main Campaign and multiplayer modes.

Overall then, the Eight Princes DLC feels like a solid addition. A new story, alignment system and gameplay tweaks provide enough new content for veterans of the main game. Continued emphasis on characters and their interactions makes Eight Princes feel part of the Three Kingdoms family. And the new separate Dynasty Mode provides a new refreshing change of pace, even if it is limited in its execution. It all comes together to deliver a welcome and wholesome package to fans of Three Kingdoms.