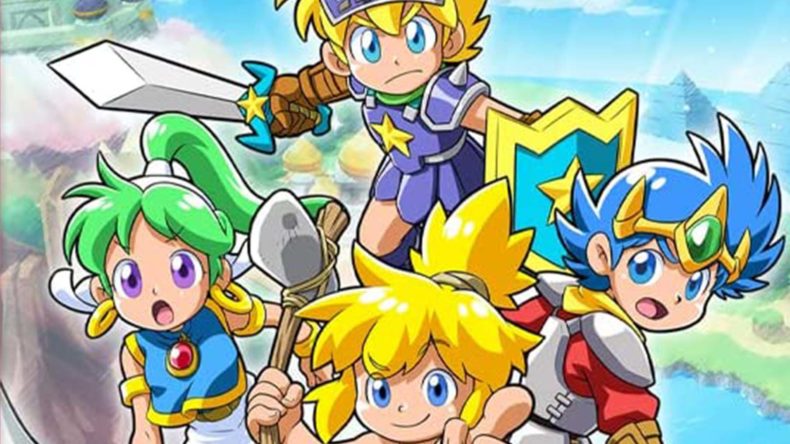 The original Wonder Boy, released in 1986, still plays like a dream all these years on. By virtue of it being in the games room of a campsite that my family holidayed at frequently as a kid, it is probably the one arcade platformer that I have fed the most money into. Fast moving, smooth scrolling, and demanding both reflexes and memory power to beat, playing it again for Wonder Boy Collection is like putting on a comfy old pair of slippers.

The Switch emulates it to perfection and it works a treat on the handheld. By virtue of its chunky, bright, simple cartoon stylings, it still looks utterly charming. You take control of super cute blonde mop-topped cave-boy Tom Tom, who can jump, throw axes once you have collected the appropriate power up, and ride a skateboard which kicks off continuous scrolling enabling you to slow down but not come to a halt. The slipperiness of the platforms is unique – like you are permanently on one of the slick ice levels from platform design cliché 101 – but it works perfectly with the almost endless runner feel. It doesn’t introduce anything too busy or drastic save for a simplistic boss every four stages, and is just a great time from beginning to end that becomes difficult to put down. 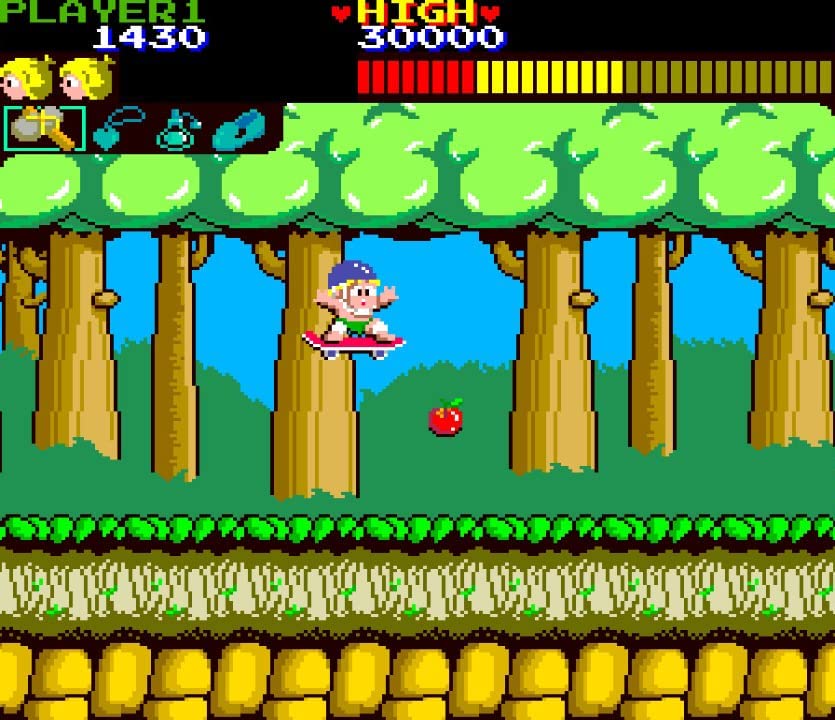 When Escape developed the first Wonder Boy, little did we know that the franchise would go on to become one of the most mind bogglingly labyrinthine in the history of videogames. There is a whole story to be told  about the multiple incarnations of Wonder Boy/Adventure Island, but I am here to look at the four titles that make up the neat little package that is Wonder Boy Collection.

Equally as surprising as the convoluted way Tom Tom/Master Higgins went in the future is the fact that the first sequel, also included here, brought a sophisticated-for-the-time action RPG hybrid – to the coin op arena. Wonder Boy in Monster Land is another excellent title that stands up well today. You play a teenage incarnation of Tom Tom who now eschews caveman aesthetics for a medieval swords and armour flex as he seeks to take down an evil dragon that has put a hurting on his people. 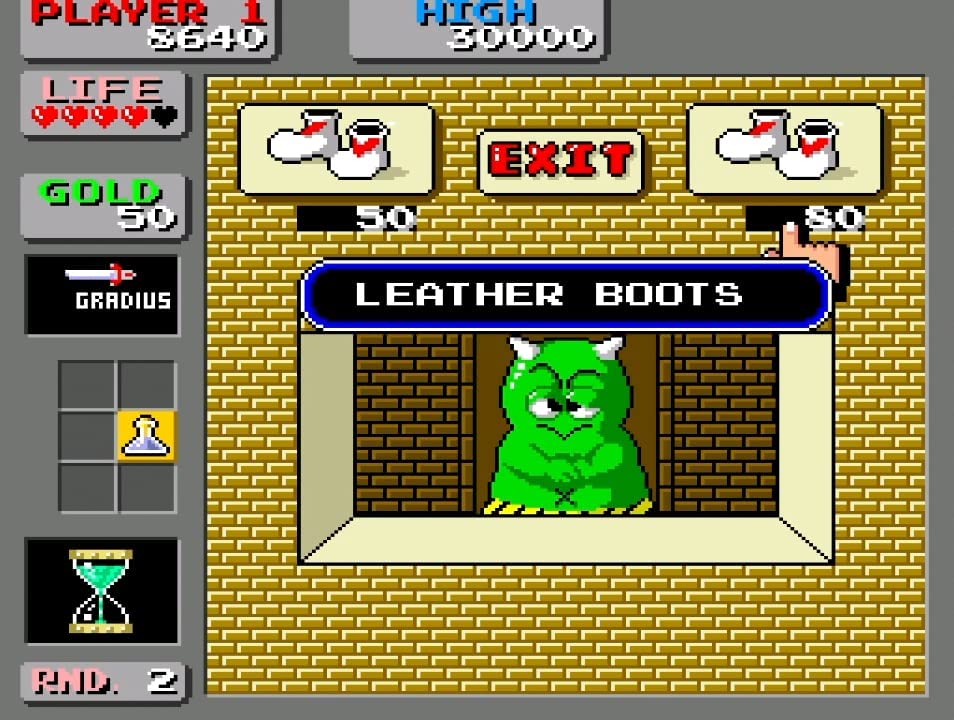 This time around the platforming is still mostly linear but more measured and slower paced. Killing enemies generates coins which can be used to upgrade weapons and armour, and a selection of magical items, in the shops dotted around the landscape, run by a rogue’s gallery of anthropomorphic creatures. There are lots of secret areas and treasures to find, as well as some surprising booby traps. It has the same chunky, bold charm associated with Tom Tom’s debut outing. But it is a completely different experience to the game that preceded it, and would have been an unusual moneymaking pitch for arcade proprietors at the time given that even a newcomer would get far more bang for their buck time wise than most other cabs. You can see why the excellent Master System port was an ideal home for it, and having it here on the Switch is equally ace. Its over 30 years old, and deserves your respect.

The remaining two games on the package double down on the RPG platforming. Wonder Boy in Monster World is the lovely looking 1991 Mega Drive/Genesis sequel, which plays like a slightly more complex, beefed up version of Monster Land. I loved this one as a youngster and it is just as much fun as I remember. Along with the phenomenal Wonder Boy III: The Dragon’s Trap, this is one of the premier proto-Metroidvanias of its day and holds up well. 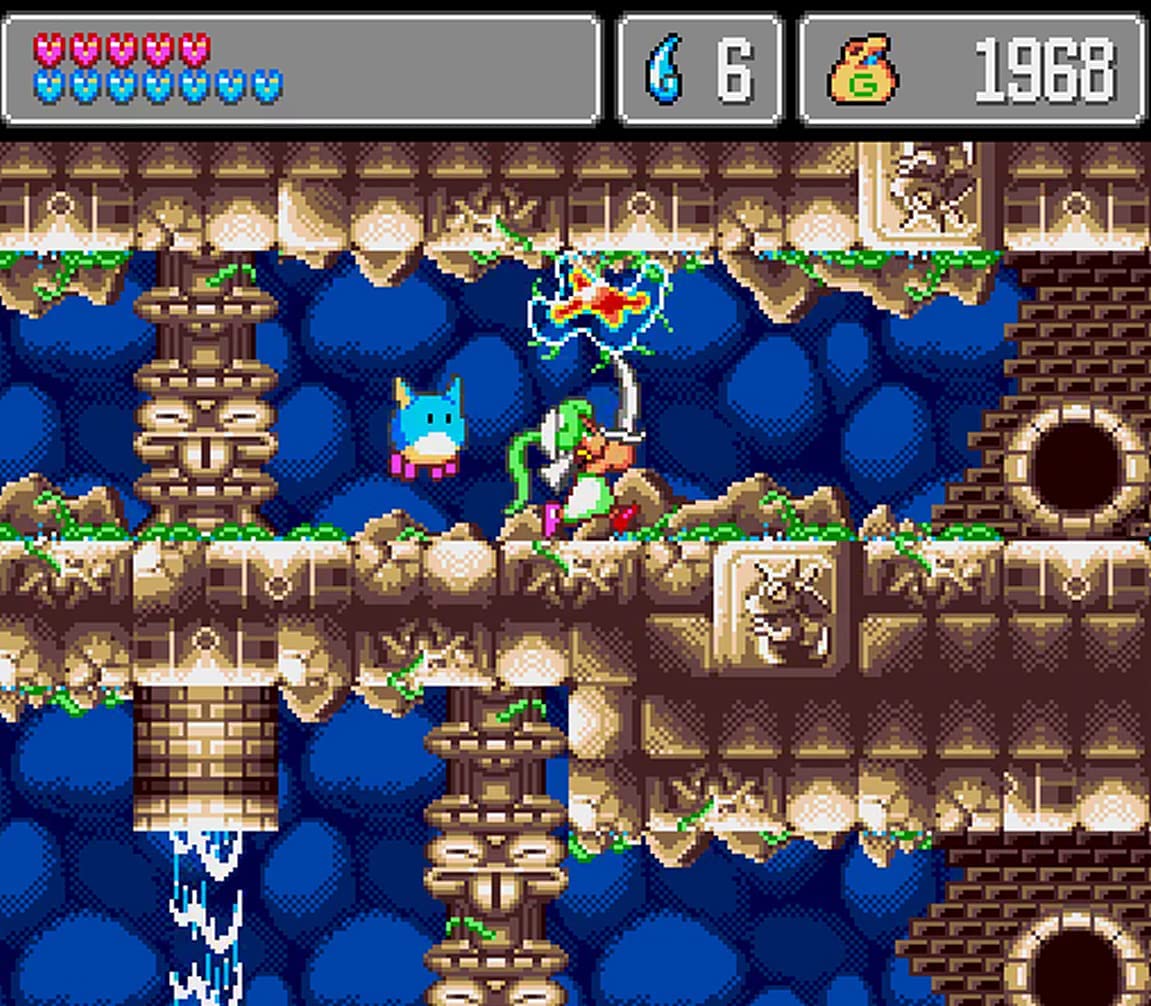 Last but by no means least is Monster World IV – a title that until a 2012 Virtual Console release had only been available in Japan. With its knowingly snarky script, astonishing visuals that would have been pushing the Sega 16-bit hardware to its limits, and likeable female hero (hence the Wonder Boy title being dispensed with this time out), this is another gem, but doesn’t quite edge out Monster World as being the best of the quartet. Sure, it has some new weapon moves and the introduction of a cutesy companion, but it is also much easier than its forebears and too linear to enable curious platform nerds like me to explore and uncover secret stuff.

All four of these games represent a fair few hours of classic retro gaming for your buck, even if three of them are a tad samey. They are all emulated impeccably with the usual selection of screen options, save states, and a rewind and fast forward feature. I am acutely aware that a more expensive version of this collection exists which features the aforementioned Dragon’s Trap – a game so good that I regularly risked tellings-off from my mum for playing it on my Game Gear under the covers – and the blinding shoot ‘em up platformer hybrid Monster Lair, a game that is packed with the eye popping charms of the original ’86 classic, with a whole load of fruit. If you can afford to, get that version. If you can’t, this is a lovely little slice of history and well worth picking up.

All four of thee games in Wonder Boy Collection represent a fair few hours of retro gaming, even if three of them are a tad samey.