Tales of Zestiria Collector’s Edition Announced with a PC Surprise 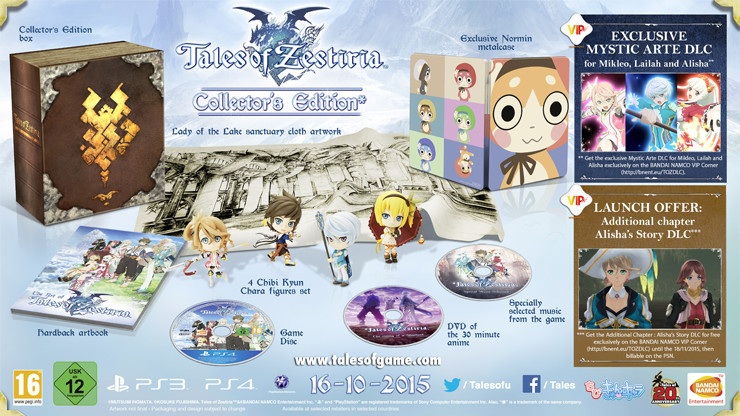 Tales of Zestiria’s Collector’s Edition and Preorder bonuses have been revealed.

The collector’s edition comes with 4 Chibi Kyun Chara figures, Lady of the Lake sanctuary cloth artwork, a hardback artbook, a 30 minute anime DVD, a soundtrack selection from the game, and a metalcase all inside a lovely box.

All editions of game will come with the Exclusive Mystic Arte DLC for Mikleo, Lailah, and Alisha and buying the game at launch will get you an additional story chapter featuring Alisha for a limited time.

To celebrate the 20th Anniversary of the franchise, Tales of Symphonia HD will be getting a PC release on Steam worldwide (not including Japan) in 2016.

There is a preorder campaign for Tales of Zestiria on Steam that may even get everyone a free copy of Symphonia HD on Steam after certain milestones are hit.

More details are available on the official Tales of blog.

It is a great time to be a Tales of fan.

Tales of Zestiria will be available in PAL territories on 16 October on PS3, PS4, and digitally on PC via Steam.