previous
Did you know you can still check playtime on the Nintendo Switch?
random
next
The events of the Mass Effect 2 suicide mission still haunt me today
0 comments 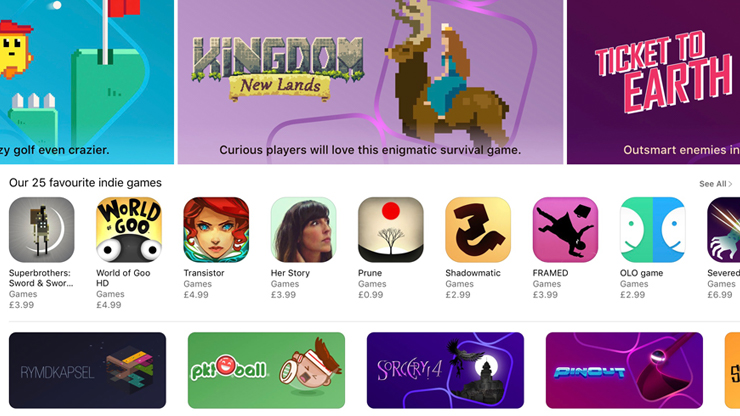 Apple has a new permanent feature for Indie Games on the App Store.

Given the App Store is a curated store front, it still receives a mindblowing number of new apps and games everyday. Unlike Google Play where there is no quality control (just like Steam), the signal to noise ratio for app and game quality on iOS is much higher. But indie developers (outside of a select few) have had trouble getting visibility on the store. Apple aims to fix this with a new permanent feature called “Celebrating Indie Games”. Talking to gamesindustry.biz Dan Gray, head of studio at ustwo (Monument Valley), had the following to say about this:

“I think Apple have done a great job promoting indie style games in the past and it’s great to see them move further in this direction. One look through the featuring week by week shows that a disproportionate amount of exposure is given to smaller teams and now with the new indie section that looks to be continuing.”

For the next 12 days, we’re celebrating the best independent game developers on the planet. https://t.co/M7fhi8CuWb pic.twitter.com/QdOXFxg0n3

I’m glad Apple is finally doing something permanent to highlight premium games on the App Store. With other platform holders like Sony and more recently Nintendo showcasing indies, Apple isn’t getting left behind. You can view the feature on the App Store here.