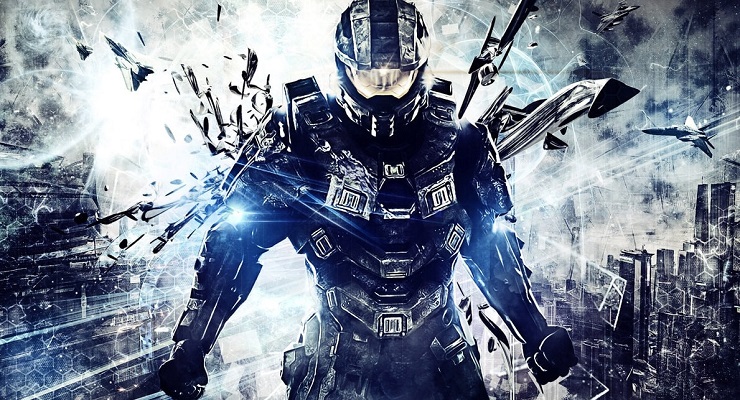 After the gloriously entertaining surprise of Halo Wars 2, with its great story and brutal villain, my love for the Halo franchise returned. It had been shaken, thanks to the disappointment of 343 Industries’ lacklustre Halo 5: Guardians in 2015. Some of you may remember when I revisited Bloodborne last year, giving it a second chance because I didn’t like it originally – still don’t, as it turns out. Well, it’s time for Halo 5 to receive that same treatment, but will the outcome be the same?

Now, before moving on, I should be clear that I’ll be talking about the campaign of Halo 5 and even the ending of Halo 4. So here’s your one and only SPOILER WARNING.

Just to be clear, I had no real problem with Halo 5’s gameplay. Indeed, the addition of squads was welcome, although their reluctance to actually help out, wasn’t. The shooting was as good as ever, but it wasn’t backed up by a decent story. Some scoff at the belief that the Halo universe is full of great stories, but the tales of Spartan-117 and the Covenant have always sparked interest. There’s an incredible depth to the lore, and just as much depth in the relationship between the Master Chief and the Pillar of Autumn’s old AI, Cortana.

The culmination of that relationship came at the end of Halo 4, in which Cortana, after suffering the effects of Rampancy – an affliction that can essentially drive an AI mad, if it outlives its life expectancy of seven years – pulls herself back from the brink, before sacrificing herself in order to save the Master Chief. No matter your thoughts on Halo 4, the ending was a bold move and genuinely had an emotional impact, killing off a major character and tearing apart a partnership that fans had invested in for over a decade.

This is where the problem of Halo 5 becomes clear: Cortana’s return.

Bringing back Cortana was a huge mistake. Not only does it diminish the sacrifice she made, it’s also a total copout. I was affected by the moving finale of Halo 4 and it made me wonder where the series would go, without one of its most influential and recognisable characters. When the whole of Halo 5 was basically a setup to bring her back, I started to lose interest very early on, as it felt like the series was being held back as a result. Then, when the game moves to turn Cortana into the villain of the story, it was a real facepalm moment that just left me cold. It made no sense that she survived in the first place, but turning her against the player just felt like a plot device purely to bring about the inevitable “rescue Cortana again” storyline in Halo 6. You’ll note that in the second paragraph of this piece, the spoiler warning did not mention Halo Wars 2. I definitely will not discuss spoilers for that game, but what I will say is that its story brought back my respect for the Halo series and what it once was. It brought in characters that could easily stand beside the series’ best icons, and are easily developed enough to slot into Halo 6. It told a story that felt epic and explosive, but also carried a sense of camaraderie that evoked memories of Combat Evolved’s motley crew.

And so, because of Halo Wars 2, I loaded up Halo 5: Guardians for the first time since completing it in 2015. Perhaps I had judged it too harshly back then, with expectations being too high and my love of the series possibly colouring my judgment? With lowered expectations and some reviewing experience under my belt, I threw myself back into the game.

Straight away, you cannot help but admire the quality of the introduction movie. The new Fireteam Osiris, featuring the faces and voices of Luke Cage’s Mike Colter and Firefly’s Nathan Fillion, dropping into a battlefield and tearing shit up. It’s like a scene from The Avengers or something. They steam in to rescue Catherine Halsey, basically the creator of the Spartans and even Cortana (sort of), and the entire mission feels just like a Halo game should. Albeit with a few upgrades.

The new Spartan armour features limited jetpacks, allowing you to quickly dodge in any direction with a quick burst of movement. It even allows you to hover momentarily as you attempt to steady your aim in midair. The new armour even offers the ability to smash through weakened walls, which obviously does nothing for stealthy encounters (then again, you’re in a massive suit of armour, so “inconspicuous” isn’t exactly in the job description), but it’s great for finding new ways around each level and their encounters. You can even use this sprinting smash to barrel through smaller enemies, which is as fun as it sounds.

But when control switches to the Master Chief, along with Blue Team, his squad of fellow Spartan-IIs (strangely absent in all his other adventures), things start to go pear-shaped. The gameplay is still great, as I keep stressing, despite Blue Team’s inability to function without your direct orders. The problems start with how the Master Chief is portrayed. He is no longer charismatic and witty, instead reduced to a grunting, mopey prick. Of course, he has lost his Cortana and is now running himself to dangerous extremes in order to cope, but when he’s even acting this way with his family – the Spartan-IIs share a combat bond inspired by real military units – it just doesn’t sit right with me. And then there’s the fact that he’s somehow contacted by Cortana, seemingly in some kind of vision. Now, I’m all for suspending disbelief in a series about aliens and genetically enhanced super soldiers, and even that one time with a talking plant, but psychic visions from a dead computer program? I kinda draw the line at that.

Anyway, it happens. It causes Master Chief and Blue Team to go chasing after a ghost, which gives the UNSC no choice but to declare them AWOL and send Fireteam Osiris to bring them in. In doing this, 343 Industries not only makes a villain out of John-117, the, erm, “face” of the series, but it also gives itself the uphill struggle of bringing in a brand new character to carry the mantle of hero in Halo 5. Unfortunately, this highlights yet another issue with Microsoft’s biggest franchise as it is now: the use of the expanded universe. Expanded universes are great when done right, with comics and novels filling in gaps in the overall plots of a series. But introducing Halo 5’s new protagonist in a downloadable TV series, then barely giving him a chance to develop some personality? Hell, the very first mission of the game takes place as a result of events that took place in an optional game mode from Halo 4 – if you didn’t play Spartan Ops, you had no idea why Catherine Halsey needed rescuing in the first place!

Using entirely optional expanded universe content to create plotlines that are essential to the main story of your flagship series’ newest entry is ridiculous, and a bit of a slap in the face for the more casual fans.

Yes, I know I’m being overly negative right now. But I went into this playthrough with a more open mind, with a view to paying extra attention to the story and to enjoy the fast and entertaining gameplay. And you know what? I did enjoy it more, this time around. The story is still a mess, but I focused more intently on the little details and things made a bit more sense. The gameplay stripped away things like Armour Lock and all those little power-ups, making it more of a traditional Halo game. Every encounter with the Prometheans and the Covenant feels very different, even more so when you make decent use of your squad. A pair of Hunters becomes more of a tactical challenge, but I liked to set my squad on one as I flanked the other. Whichever fight ended first, it left the other Hunter distracted and open for a barrage of gunfire into its vulnerable back.

Then there are the vehicle sections, with some great, visceral and explosive combat setups. The level design makes for some wonderfully tense battles, with lots of verticality to give both sides advantages and disadvantages, and that’s before you take aerial combat into consideration.

But it’s not all tactical and fun. This is down to the gameplay’s achilles heel: The Warden Eternal. In story terms, it makes total sense that an AI construct can inhabit many forms, but in gameplay and design terms, it feels repetitive and lazy. Bosses have always had some awkward moments in the Halo games, but they’ve always had variety in their design. In Halo 5, fighting the Warden again and again was terrible. He looked the same in every fight, sometimes even sending in copies of himself to boot, and every battle went the same way. Why couldn’t he insert himself into a walking tank, like some Forerunner version of the Scarab? Or perhaps take control of an entire area, creating a labyrinth to change up the situation? How about a swarm of Sentinels? Hell, anything would’ve been better than fighting the same, dull enemy, over and over and over and over.

Although there was a lack of creativity in the Warden’s design, the same could not be said about the game as a whole. It’s still a visual treat, with some truly stunning locales like the Sangheili homeworld of Sanghelios, the Forerunner world Genesis and even running down the body of a giant Guardian as it restructures itself. Every battle is strangely beautiful, with light shows of plasma and explosions surrounded by gorgeous architecture that is wonderfully lit. There’s no doubting the talent behind 343 Industries’ visual and technical design.

The ending is still ridiculous, however. Tainting the experience somewhat. The abruptness of it, the clear message that Guardians is purely a setup for the third game in this Forerunner trilogy, just feels cheap.

So, Halo 5: Guardians is still a disappointment, but not as much as it was back in 2015. Its characters and story are weak, but its gameplay still shines, despite the Warden’s attempts to bring it all crashing down in a heap of mediocrity. Where it is lacking however, I can only hope lessons have been learned, especially now that Halo Wars 2 has shown what a modern Halo game can be. Its story was entertaining, its characters well-rounded, and its villain was a brute, both figuratively and literally.