previous
15 Minutes of Game: Rez Infinite (PC)
random
next
The Overwatch Deathmatch and Team Deathmatch update is now live on all platforms
0 comments 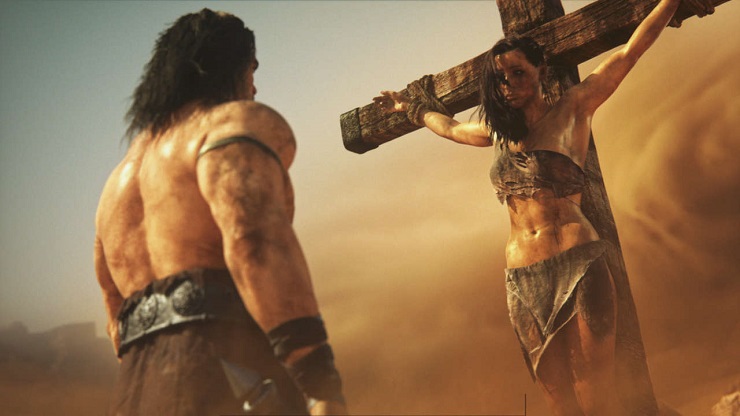 The world of Conan the Barbarian is a fantastic one. Whether you’ve read the original Robert E. Howard stories, got stuck into the Dark Horse-published comics or simply enjoyed Arnie’s turn as the muscle-bound adventurer (or the underrated reboot starring Jason Momoa), it’s hard not to enjoy the fantasy of it all. Perhaps you’re like me and also enjoy the tales of Red Sonja, the she-devil as the people of the Hyborian Age liked to call her. Either way, Conan Exiles was an exciting prospect, allowing players to survive in that very same world inhabited by such iconic figures of fantasy.

The reality is very different, unfortunately. Having been initially released at the end of January 2017 via Steam’s Early Access program, the game has finally made its way to console on Xbox One’s Game Preview. Obviously this means that the game is still in development, so some flaws are forgivable and even expected, but even with that in mind, Funcom’s survival sandbox just doesn’t seem to know what kind of game it wants to be. I’m getting ahead of myself though. Let’s start at the beginning, as the opening scene sees Conan rescuing your custom character from death-by-crucifixion. Indeed, the character creator takes place as your poor avatar hangs on the cross. Now, let’s address the elephant in the room: yes, there’s some nudity involved but no, there’s no “penis slider” in the Xbox version. You can adjust boob size to your heart’s content, but no tiny/massive dongs allowed, I’m afraid. The creation tools aren’t as in-depth as an Elder Scrolls title for example, but they are pretty robust. Choose a race from the fictional ones provided, such as Cimmerian and Hyrkanian for fans of the Hyborian icons, which essentially denotes skin tone and general face shape, and then customise things like height and more refined facial details, etc. before being cut down from your cross and being left to your own devices.

That’s the first issue: where does Conan disappear to? He cuts you down and then wanders off. You can’t chase him down because he just vanishes, and he doesn’t even bother to stick around to give you a few pointers. This is because there is no story in Conan Exiles. Hell, there isn’t even a proper tutorial to guide you in your first steps. This wouldn’t be so bad if it weren’t for the fact that I started my journey in the middle of the fucking desert, unarmed and clad only in a loincloth, not to mention suffering from the onset of heatstroke as the myriad warnings in the top left told me. And so we approach issue number two: what the hell kind of game is Conan Exiles trying to be? As I stated, my journey started off near-death in the middle of nowhere, and I’m left to my own devices. So, it’s a sandbox game, right? Wait, it also wants me to survive by eating, drinking and seeking shelter, not to mention fighting off diseases and wildlife. So..survival sandbox, then? Hang on a minute, it also wants me to build my own supplies and shelter, eventually my own settlements too. Erm, so that would make it a survival sandbox with building elements? Not so fast, you also have to take into consideration the RPG aspects and the MMO slant. It’s just one big mash-up and as the saying goes: it’s a jack of all trades, master of none.

This confused, overly complicated game type doesn’t help Conan Exiles’ chances of success. The reason games like Minecraft and The Long Dark have done so well is down to their simplicity, even in the face of overwhelming odds. Minecraft succeeds because it takes the time to teach you the basics, so that when you do come to the more complex stuff, it has laid the foundations for you to learn these new things relatively easily. The Long Dark succeeds because it doesn’t bombard you with features and options, it just leaves you to survive in the freezing wilderness. Conan Exiles does none of this right. It commits the sin of leaving you to die without even giving you a proper tutorial, bombarding you with messages of thirst and heat stroke from the very beginning. It expects you to craft without being taught how its world works, leaving you to work everything out for yourself as you battle the elements and every other bloody thing that chooses to assault you. Once you do stumble upon some success, you’ll then find that you can level up through combat XP and accomplishing various other feats. Again, the needless complications arise here. Alongside distributing the usual attribute points as you would in any bog standard RPG, you also have to learn ‘recipes’ in order to craft better items during your adventures. I mean, on top of all the other things you have to keep an eye on to survive, you can’t even simply experiment with your crafting. This recipe system just feels too videogamey, arbitrarily locking your progress and further confusing the idea of what Conan Exiles is actually trying to be.

It should be said that it does look decent enough, mainly thanks to a lighting system that fans of Dragon’s Dogma will appreciate. When it gets dark, it gets pitch black. You absolutely must have a torch equipped, or if you’ve built a shelter, you must have braziers going or have a big-ass bonfire raging outside, or you won’t last the night. On top of this, the world itself is pretty varied, coming with many different biomes complete with their own weather conditions that threaten your existence. In sunny climes you’ll need to regularly find shelter from the blazing ball of fire overhead; in colder areas you’ll need to cover up (put those boobs away, you perverts) and then there are corrupted zones, filled with skeletons and other nightmarish dangers, that corrupt your character. However, I found no explanation of this feature anywhere in the game. Online explanations suggest that it is a dark magic that surrounds certain zones and monsters, leading to your max health being drained. The only way to remove it is to have a dancer thrall in your presence. Seriously, how is anyone meant to know that? It’s yet another example of this game’s complete lack of respect for the player. Yet I persisted. I kept playing, even going so far as to explore the server options available when hosting your own game. This allows you to customise your experience, even turning off the nudity feature for prudish players that still want to get their fix of all the murder. Because violence is all fine and good, but god forbid a bit of sexual content appears in your game, eh? But I digress. Server options allow you to essentially switch off eating/drinking, and even allow you to become a demigod that basically makes you invincible. Again, raising the question of what Funcom is actually aiming for, here. That said, it’s a useful feature that may allow new players to get used to the game’s mechanics and combat. But don’t get used to it, because if you quit the game and return to your save later, it will have reset the server options. So make sure you remember what settings you enabled!

Now we come down to the meat and veg of survival in Conan Exiles: the combat. Not gonna sugar coat it, it’s garbage. It’s a clumsy mish-mash of rolling and wildly swinging makeshift weapons, and Crom help you if you’re attacked by multiple enemies. At one point early on I stumbled upon a group of fellow exiles huddled around a fire, but as I approached they immediately charged me, introducing me to the business end of their clubs and axes. My attempts to defend myself were futile, because every hit I took would stop my attack animation, and when receiving constant blows to the head it basically renders you helpless. This even happens against single targets and can lead to some real frustration when you lose all your gear for the umpteenth time. And if you haven’t crafted a bed somewhere, you’ll respawn back in that opening desert, naked as the day you started the game.

In spite of being in Early Access for nearly seven months on PC, this Xbox build of Conan Exiles is not fun. It crashes at random, resets server options and you may even find yourself randomly at the mercy of the game’s vicious wildlife upon loading up your saved game. More lost progress there, most likely. I don’t mind a good survival experience, but right now there are much better examples out there, most of which offer some kind of rewarding gameplay and actual feedback. Without some big, big changes to its basic structure and gameplay mechanics, Conan Exiles is destined to fail. Do yourself a favour and go read the books or comics instead; stay away from this game until it actually resembles a fun experience.