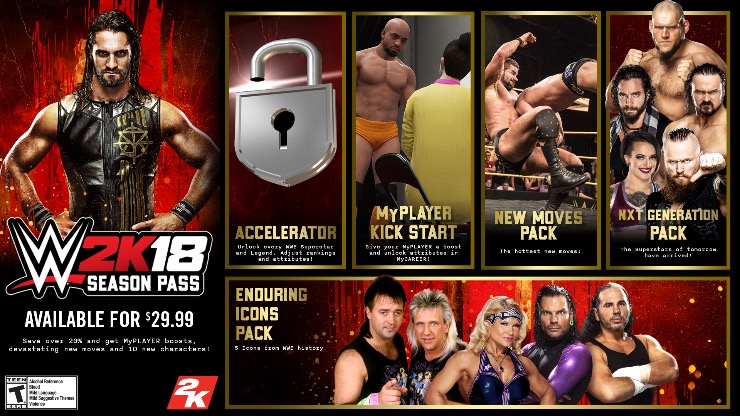 2K details the WWE Season Pass ahead of the release in little over 2 weeks.

WWE 2K18 releases on PS4, Xbox One, and PC in little over 2 weeks. It will be on Nintendo Switch this Fall. The DLC includes The Hardy Boyz, NXT supeerstars, and more. Content will release after launch through 2018. Here’s what the season pass includes:

The Accelerator will be available for £3.99.

The Enduring Icons Pack will be available for £7.99.

Players can also unlock all clothing made available at launch that provides attribute boosts in MyCareer;

MyPlayer Kick Start will be available for £7.99.

The New Moves Pack will be available for £2.99.

The Season Pass includes all of that at a discounted price of £24.99.

WWE 2K18 releases on October 17 for PlayStation 4, Xbox One, and PC. It will be on Switch later.