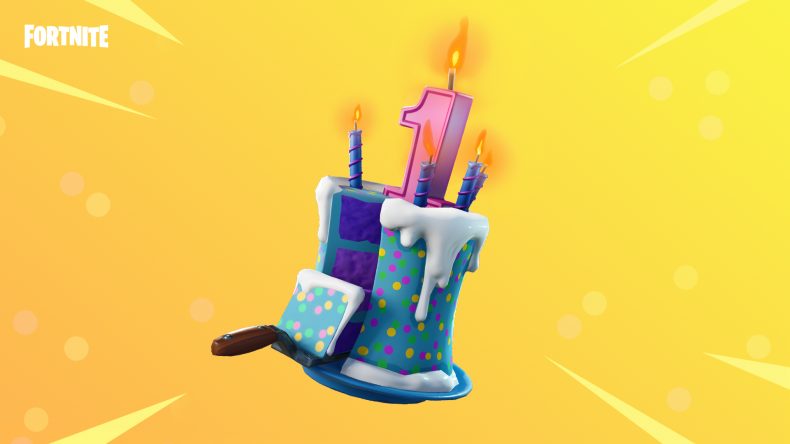 Fortnite patch day is here and downtime for 5.10 has officially begun.

Patch 5.10 brings back the lovely LTM Playground (July 25 onwards), has loads of improvements to the mobile version, and new weapons in addition to the usual balance fixes and tweaks. The full patch notes for Battle Royale are below:

Playground is back and better than before. Challenge your friends to a duel and build incredible structures on your own private island. Wield the new Legendary weapon in Battle Royale, the Compact SMG.

The Save the World storyline continues in the Canny Valley campaign. Get in-game and complete the Fortnite Birthday questline to unlock a special birthday reward!

#Fortnite1st Birthday
We’ve got a birthday party planned for #Fortnite1st and you’re invited! Eat cake, party and bring your friends. Each Birthday Challenge you complete unlocks a slice of the birthday cosmetic set.

Playground LTM (Battle Royale)
Playground mode is back on Wednesday, July 25! New team select options let you and your squad set up team battles for practice and training.

Race! Create, and share your screenshots and cinematics on social. New default keybindings for new players.
All keyboard layouts will continue to default to the QWERTY bindings for new players or those who reset their back to default.
Changed countdown timers to display more useful information
Shows hours left instead of days when under 72 hours.
Shows hours:minutes: seconds left when below 13 hours.
Changed the background of the loading screen bullet points area to be partially translucent.
Removed the “static noise” when switching tabs.
The “Restore” button has been removed from the settings screen. Also, the “Reset Defaults” button has been renamed to “Reset”.
Leaving the settings screen before applying changes will give the option to apply changes and exit or discard changes and exit.
Double clicks now register as two clicks on a button, allowing for faster navigation through Next/Previous type buttons

Bug Fixes
Items on the ground will properly have their stack counts updated if the stack size changes while the player is currently looking at them.
Fixed a frame delay on some text layouts, which would cause large blocks of text to reflow their wrapping one frame after seeing them.
Corrected text shadows that were appearing incorrectly in certain areas of the UI.

You can now find birthday cakes placed around the map with consumable slices next to them. Enjoy those tasty treats!
Cake slices give +5 health and +5 shield instantly when consumed.
Complete three birthday even challenges to unlock a new emote, spray, and Backbling.
The Battlebus and Supply Drops have been decorated to celebrate #Fortnite1st.

Summary
Playground is a low-pressure environment where friends can let their creativity run wild. Build massive structures. Practice with the weapons and items. Fight against your friends. This mode returns with improvements for a limited time on Wednesday, July 25. Have fun!

What’s New?
Players can now switch teams in-game. Join the same team to work together creatively, join separate teams to practice fighting each other!
Note: Voice chat will remain on across all teams, future iterations of the mode will offer more customization.
Aim assist will work when using a gamepad against players on an opposing team.
Matches will no longer end if one player leaves the server.
Golf carts have been added and spawn 100% of the time.
Ammo cans spawn 10x the amount of ammo.
Removed grey vending machines, increased the chances of higher-tier machines spawning.
Increased launch & bounce pads spawn likelihood.
Lowered forced glider deploy height, so players can get back into the action more quickly.
Increased max rocket ammo cap to 60.
Increased rocket ammo drop rates.
Added 100 Supply Drops.
Chests now spawn 3 weapons and more ammo & consumables than normal.
Floor loot now spawns 3 items.
Increased Chug Jug and Slurp Juice spawn chances, decreased Bandages.
Added Chug Jugs to floor loot.
Respawn timer lowered from 10s to 3s.
Mode Details
Drop into the Battle Royale map alone or with up to a full squad for an hour.
Players respawn immediately unless eliminated by the Storm.
The Storm doesn’t start closing in for 55 minutes and takes 5 minutes to close in.
Resources gained from harvesting increased by ten times the normal amount.
100 Llamas will be spawned on the map.
Chests & ammo boxes spawn 100% of the time.

Bug Fixes
Fixed an issue causing bullets and projectiles to be blocked by invisible collision.
This was being caused by player placed map markers
Autorun can now be used while in vehicles. Fixed a logic issue in the autorun canceling code.
This should also fix autorun canceling when releasing the stick while using a gamepad.
Changed the button layout for Old School and Quick Builder configs so that the “change seat” action button is not the same as the “powerslide” button.
Sniper rifle bullets no longer incorrectly stop when passing through certain trigger volumes.
Eliminating players will now properly grant challenge progress.
If the same player knocks out and eliminates an enemy with two different weapons, they will get elimination quest progress for both weapons.
Players will no longer get stuck in the coasting state if they change seats while in a vehicle.
Pickaxes will no longer stretch and appear incorrectly if the slow-motion effect plays while players are riding in a vehicle.
Fixed an issue where a player would not have a weapon out if hitting a bounce pad into a jump pad under certain network conditions.
Players will no longer hold weapons while emoting if they’re riding in an All Terrain Kart.
Players will no longer fall through floor or pushed through walls when placing or editing structures.
Remote Explosives will now only show damage numbers when damage is done to players.
Vehicles can no longer be flipped while standing on top of them.
This fixes the issue where players would sometimes become stuck or teleported if standing on a vehicle that flipped.
Crouching is no longer allowed while emoting.
The Wave emote, emoticons, and sprays will now continue to play even if you’re moving.

Adjusted lobby nameplate arrangement to better account for long player names.
Added the ability to combine stackable items in player inventory if the stack sizes aren’t already capped.
The Game Mode Select screen now sorts in the following order from left to right:
Solo, Duo, Squads
Bug Fixes
Fixed an issue preventing players to select nothing as an Outfit and Backbling.
Removed the ‘Save and Exit’ option for items without variants.
Double tap the accept hotkey/button to confirm your selection.
Fixed an issue in the locker where the shuffle icon for randomized outfits was drawn slightly differently to other shuffle icons.
Removed an error message when trying to purchase the Battle Bundle while at tier 76 or above.
The correct actions are now shown on the HUD when you get into a Shopping Cart for the first time after being in an All Terrain Kart (ATK).

Downloading patches will now continue when you switch to a different app. When the download has completed, you’ll receive a notification.
Fire mode selection now has preview videos to better illustrate the functionality.
Added new placeable individual quick bar buttons to the HUD layout tool. Can be set to either locked Combat, locked Build, or Automatic mode to switch based on the player’s currently selected mode.
Tapping a currently selected build item from the quick bar will now build the item.
Bug Fixes
Fixed texture streaming issues with the battle bus.
Audible pops will no longer occur on iOS during loading screens and gameplay.

Fortnite is now available on PS4, iOS, Nintendo Switch, Xbox One, and PC platforms. It is coming to Android this Summer.