previous
Games of August: Yakuza Kiwami 2, Overcooked! 2, Dead Cells, PES 2019, and more
random
next
So far Marvel's Spider-Man is everything I wanted it to be and more
1 comment

Monster Hunter: World 5.0 released on PS4 and Xbox One with new content, fixes, and more 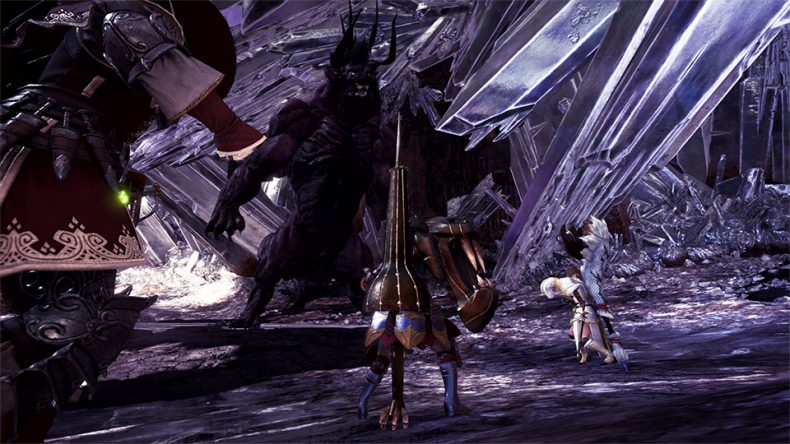 This update brings hte PS4 version to 5.0 and the Xbox One version to 5.0.0. The focus is the Final Fantasy XIV Behemoth who joins in. Defeating the Behemoth will let you get some weapons and armor to look like the Dragoon and the ability to make your Palico look like a Moogle. Outside of that, the new features and patch notes are below: Like the gallery, if any button other than Options is pressed during a skippable cutscene, a control prompt now appears at the bottom-right of the screen to indicate that you can skip the scene.

A bug related to Strong Jumping Advancing Slash was fixed where only the final attack would be receive the benefits from the Airborne skill. Now all attacks within the move will receive the skill buff.

Fixed a bug where holding the R2 button (PS4) or right trigger (Xbox One) while landing after the 2nd stage of a Plunging Thrust (after comboing into it from a Rising Slash after a slide) would not transition into a guard.
The behavior of the camera during Tackle I and II wasn’t going back to normal when the action finished, resulting in unforeseen behavior. They have now been fixed to match the behavior of the camera from Tackle III.

A bug was fixed where a Charged Upswing would be performed when charging and attempting to perform a Spinning Strong Upswing while moving down a slope (before the player begins to slide).

A bug was fixed where Dragon Piercer would fire outside the intended range when the reticle was moved out of range the moment Dragon Piercer is fired, and the player tries to aim the bow.

A bug was fixed where a Circle button action would be performed after an R2 special weapon attack, after the player jumps off a ledge with the Circle button during the middle of a Slinger ammo load animation (including when the Sword and Shield is drawn).
For this fix, we have rendered all buffered inputs invalid during the Slinger’s loading animation. While buffered inputs are invalid even during the Sword & Shield’s unsheathed Slinger loading animation, by canceling the loading animation there won’t be any noticeable difference, so the impact on controls should be minimal.

A bug was fixed where usable time for mantles would decrease during animations such as sniffing tracks. It has now been fixed so that a mantle’s usable time will not decrease when standing still, which was the original intent.

Fixed a bug that made it appear (to players on the guest side of multiplayer) that monsters were sliding when knocked down on a slope and the down animation was replaced by a paralysis animation or similar.

A bug was fixed where the target camera would target another monster by itself when a targeted slain monster’s body disappeared during multi-monster slay quests.
A bug was fixed where if you’re using the Focus Camera and lock on to a monster moving between areas, repeatedly locking on and canceling the lock on would cause the camera to keep its focus on the monster. The camera will now properly cancel lock on.
A bug was fixed where players joining could not progress pass the loading screen if a quest failed while the host fired an SOS flare, resulting in the SOS flare continuing to stay active even when the quest was effectively over.
A bug was fixed where NPC dialogue would close automatically when the Hunting Horn’s Health Boost (S) effect runs out. This fix prevents the Grimalkyne cutscene event in the Coral Highlands from getting stuck.
A bug was fixed where updated data between players differed when a player talks to the characters at the Resource Center when the limited bounties are being updated.
The height on Vaal Hazak and Arch-tempered Vaal Hazak’s field of view settings have been tweaked.
A bug was fixed where if the player mounted Lunastra in a specific part of area 11 in the Elder’s Recess, Lunastra would move to a location where the player is not permitted to go, and would be forcibly removed from Lunastra. This has been fixed by changing Lunastra’s travel route when a player is mounted on her.
A bug was fixed where Lunastra would move to another area even if stunned by a flash pod. It has now been fixed so Lunastra cannot change areas when blinded by a flash pod.
Lavasioth’s monster field guide data has been fixed to match the game parameters.
Physiology: “Chest: Breakable” was fixed to “Back: Breakable”
Rewards: “Chest Broken” was fixed to “Back Broken”
A bug was fixed where the “Reload” message would not appear when switching from a Light/Heavy Bowgun to a Gunlance during a quest.
A bug was fixed where sharpness level would not actually change when switching to equipment with the Handicraft skill equipped during a quest. Sharpness level will now go to its maximum level, accounting for the Handicraft skill.
A bug was fixed where the item window order would change unintentionally if the player switched between two equipment loadouts where the first specialized tool for Loadout A was the same as the second specialized tool for Loadout B.
A bug was fixed where the number of owned and used armor spheres would not correctly display under certain circumstances when upgrading armor.
A bug was fixed where, under certain circumstances when changing the color of layered armor, the color icon would disappear from all body parts except for the head when “Change All” was highlighted by the cursor.
Due to a texture setting mistake, the bloomers under the Blossom layered armor skirt displayed as black and white. They have been fixed to display the intended color, like the original armor.
A bug was fixed where a female hunter’s legs would become twisted when performing specific gestures twice in a row while wearing the Vaal Hazak gamma armor.

The visual appearance of the following armor (including layered armor) have been fixed.
1. Male character’s hair would jut out of the Diablos Helm Alpha, Diablos Helm Beta, Empress Crown Alpha, Bushi Kabuto “Sabi” armor. It has now been reduced.
2. When a male character is wearing Brigade Lobos Alpha, part of their hair would go into the head of the character, and could be seen when the character opened their mouth.
Unlike during a quest, when talking to a First Wyverian during an expedition, the following information was not revealed to the player. It can now be obtained during an expedition.
1. Most slayed monster
2. Least slayed monster
3. Most captured monster
Other minor bug fixes.

Localization-related bug fixes
A bug was fixed where, when playing the game in Arabic, after the Grimalkynes perform their assist move in the Ancient Forest the game would freeze.
In Italian, the translation for Quick Shot and Dashing Shot were the same. The translation for Dashing Shot has now been updated.
Quick Shot
Tiro Rapido (no change)
Dashing Shot
“Tiro Rapido” changed to “Tiro in corsa”
In French, the translation for Lunastra and Teostra’s bond attack contained an unintended translation. It has been fixed to the following.
Lunastra Bond Attack
“Super nova !” changed to ”Union avec la Lunastra !”
Teostra Bond Attack
“Hyper nova !” changed to ”Union avec le Teostra !”
In the gallery, a typo in the traditional Chinese title for “The Insatiable Deviljho” has been fixed.
The Insatiable Deviljho
“貧食的恐暴龍” changed to “貪吃的恐暴龍” Monster Hunter: World is available on PS4 and Xbox One. It releases on PC next week.