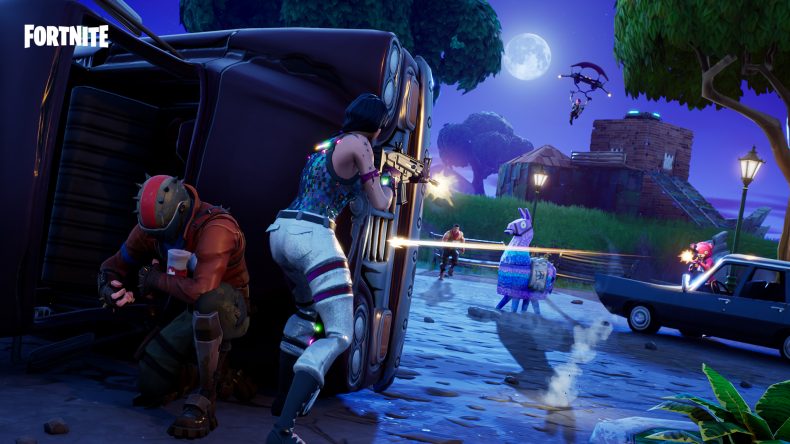 Fortnite patch 6.31 is rolling out across all platforms and here are the patch notes.

This update adds the Team Rumble LTM with respawning and two teams alongside a new shotgun and more. Check out the Battle Royale patch notes below:

Summary
Two large teams fight for the Victory Royale in an action-packed mode where the first team to get 100 eliminations wins!

Mode Details
Two teams of 20 players.
Players will respawn after 5 seconds when eliminated, keeping their inventory.
Eliminated players spawn a random type of ammo upon elimination, as well as a random stack of either 120 Wood, 90 Stone, or 60 Metal materials.
Only Uncommon weapons (or better) are available.
The first team to 100 eliminations wins.

New Epic and Legendary Pump Shotgun
105 / 110 maximum damage
Available from floor loot, chests, Supply Drops, and Vending Machines.
Shotguns will now always apply at least 3 pellets worth of damage if only 1-2 pellets hit the target.
NOTE: Bonus pellets can never be critical hits.
Pump Shotgun maximum damage and fall-off changes.
Pump Shotgun maximum damage increased from 80 / 85 to 95 / 100
Pump shotguns will do higher damage in shorter range buckets but damage falls off quicker. This means you’ll do more damage to closer targets but less damage to farther targets.
Added Stink Bombs to Supply Drops
Removed Double Barrel Shotguns from floor loot
Mounted Turret
Adjusted Mounted Turret collision to make it easier to land shots against anyone occupying it.
Removed the ability to repair the Mounted Turret
Fixed players being able to clip into turret barrels and get stuck.
Supply drops will automatically open if landing on a Mounted Turret
Drop rate reduced from 1.719% to 0.915%
Bug Fixes
The Mounted Turret can no longer fire through its own floor.
Fixed an issue with players not having an audio cue while gliding after respawning.
Fixed an issue with Chiller effects not applying properly to players’ feet. Reduced the in-air speed when using the Glider Redeploy feature in supported game modes.
Added functionality that allows the placement of map markers in the world without needing to go into the fullscreen map.
You’ll be able to look at a position in the world and use the “Place Marker” keybind to place a map marker. This command will only be available by default while in Combat Mode.
This command is defaulted to Left on the D-pad for controllers and the Middle Mouse button for PC and Mac.
For Mobile players, this command will be bound to an optional button in the HUD Layout Tool.
Added the ability to pick up and throw back Dynamite with a lit fuse.
To throw the Dynamite with a lit fuse, get near it and use the interact key.

Bug Fixes
Increased the Dynamite explosion height against players from 192 units to 300 units.
This was done to prevent players from being able to jump over the explosion area on flat ground without taking damage.

Bug Fixes
Fixed an issue where players would receive points during warmup island which would be later removed.

Bug Fixes
Fixed an issue where the Glider in-air audio cue wouldn’t play for players who glide in after respawning.

Bug Fixes
Fixed a crash on Nintendo Switch that occasionally occurred when logging in for the first time.

Bug Fixes
Fixed an issue where player nameplates disappear after scrubbing a replay.

Fortnite is available on iOS, Android, PC, PS4, Xbox One, and Switch platforms.