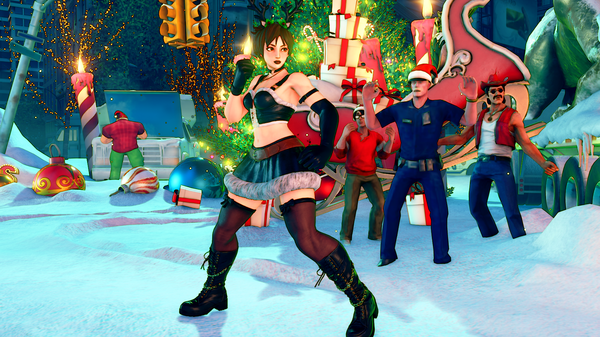 The Resident Evil and Holiday Costumes 2018 go on sale beginning November 27th. They include the following:

Urien (Wesker) – Albert Wesker was first introduced in the original Resident Evil as a double agent working for the Umbrella Corporation. He would continue his path of madness in subsequent entries to the series, eventually becoming one of the most recognized villains. This outfit is inspired by Wesker’s appearance in Resident Evil 5 where his overarching goal was to rid the world of humanity. The alternate code for this costume takes off the jacket and glasses.

Kolin (Ada) – Ada Wong debuted as a supporting character in Resident Evil 2 who was initially seen as an innocent bystander, but was revealed to be an undercover spy. Acting as an anti-hero of sorts in future games, Ada has become a fan-favorite character in the series. Kolin’s costume is inspired by Ada’s appearance in Resident Evil 6 with the alternate costume coming from Resident Evil 2.

Cody – Part of Mayor Cody’s new responsibilities may include him dressing up as Santa in order to give out presents to the children of Metro City. Using the alternate code will take off Cody’s jacket when he needs some room to stretch.

Blanka – Blanka, the green-skinned warrior, had a very scary look. And if you ever saw him, you could say his electric glows. All of the other fighters used to laugh and call him names. They never let poor Blanka join in any reindeer games. Using the alternate code will take off Blanka’s reindeer hood!

Sakura – The usually bright Sakura seems to have a different take on the holidays with this dark outfit. Perhaps she’s trying to match her new outlook on life. The alternate code will take off her antlers and gloves.

Falke – This festive costume for Falke shows she’s ready to bring the holidays on the road while helping others who suffered at the hands of M. Bison. The alternate code will take off Falke’s hat.