Remembering the fun we had with Resident Evil 5 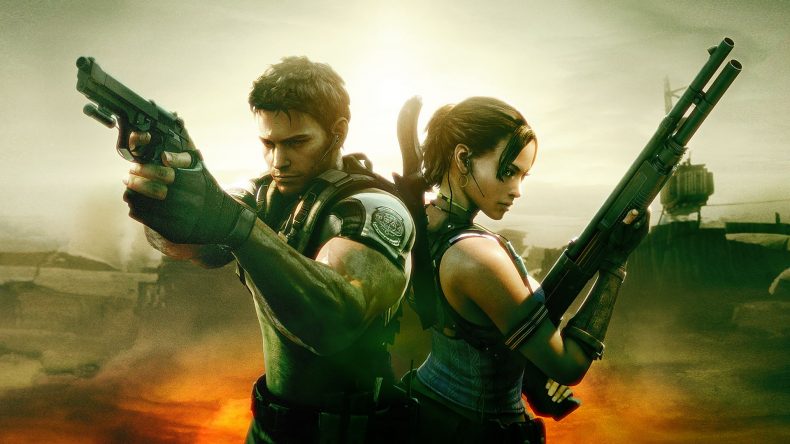 It’s ten years this month since the release of Resident Evil 5, if you can believe it. Often a game that gets overlooked thanks to the shadow of its sublime predecessor Resident Evil 4. And whilst Resi 5 never reaches the dizzy heights of Leon’s foray into rural Europe, it does borrow a fair chunk of what made it a good game, and there was also lots of fun to be had in the co-op mode too. It remains the best-selling entry in the Resi franchise, a fact that is often overlooked when considering the quality of games in the series. So to celebrate this sometimes underappreciated title, we here at God is a Geek have looked back a decade to relive the fun we had with Resident Evil 5, and wanted to share those memories with you. Contrary to what many thought about Resident Evil 5 I actually have fond memories of the game. It released at a time when I had not long made friends with a fella I met via the GameSpot community forums. I still play with him now actually, as he cajoles (read: bullies) me to play Anthem with him! We both were pretty big fans of the superb Resident Evil 4 and so when 5 released we agreed with each other to purchase it and play in co-op.

I know that for a lot of people the idea of playing a Resident Evil game in co-op is pure heresy, but honestly, my friend and I (let’s call him Munch) had an absolute blast playing. I, of course, played as Sheva and he as Chris. I have very strong memories of trying to perform the co-operative melee combos with limited success and lots of laughing with him bellowing out “SHABBA” every time something went wrong. The fight with Jill Valentine on Professional is another strong memory as well, featuring two hapless fools trying to coordinate to take her down. I vividly remember me yelling “I’VE GOT THE BITCH, STOP TRYING TO REASON WITH HER AND JUST PULL IT OFF!”, while Munch sobbed about how the “lovely Jill has gone bad”. Great days.

It isn’t the best Resident Evil game by far, but as an action game that you can experience in co-op with a good friend it is great fun. Between us, I think we must have played through that campaign a good few times and sunk quite a few hours into Mercenaries as well. It was one of the earliest games on my 360 that I got the full 1000 gamerscore for, and I will always think about it fondly. Like Nicola, some of my best memories about Resident Evil 5 were from the co-op in the game. A friend and I had adored Resident Evil 4, so were keen to party up for Resident Evil 5, hoping for more of the same. We’d both spent a bit of time with the first few levels single-player before we’d managed to party up, but from that point on played the rest of it together, going in blind to what the game was going to throw at us, jump scares and all, and we had a great time.

Being a co-op game, Resi 5 was all about teamwork, which my friend and I were up for, but at the time we were playing online, we were struggling to get Party chat to work across PSN and so couldn’t chat to one another whilst playing. As such, we had to rely on the in-game communication system to try and explain to each other what we wanted to say. Cue plenty of pointing at things with the laser sights on our weapons, as well as trying to use the clunky but comical command system, our characters shouting phrases like “I need AMMO!” and “This WAY!” with far more gusto and enthusiasm than the miserable and tense surroundings demanded, making the journey more funny than it should have been, but infinitely more enjoyable.

I’m glad we weren’t the only ones who ran around like headless chickens constantly wondering if grabbing at Jill Valentine’s chest was working, and I’m sure we weren’t the only ones to accidentally get fried by wayward laser beams either. And the less said about that ruddy fella with the chainsaw, the better! There were so many moments in this game, culminating in a rewarding, and ultimately satisfying (story-wise) final boss battle.

And even after the co-op was over, I found myself returning to speed-run all of the levels to get better ranks in each of them, and working towards nabbing the elusive Platinum. And do you know what? I enjoyed every minute of it, unlike some Platinum slogs. Resident Evil 5 was a very good game, even if it didn’t feel like a proper Resident Evil title. And even if Chris Redfield looked ridiculous with biceps bigger than his head. Jealous? Moi? Ever since playing the fantastic CODE: Veronica X on PS2 back on release (I never owned a Dreamcast and no, I will not apologise for that) I had been waiting to see the conclusion to the Wesker storyline. It didn’t surprise me to see that Chris had bulked up in RE5, considering his last encounter with the super-powered Albert Wesker went poorly. I did wonder why Jill hadn’t joined him in Africa (more on that in a moment, with spoilers, just in case you hadn’t already seen the warning above) but I was also happy to meet Sheva Alomar, Chris’ new partner in the BSAA, now that the S.T.A.R.S. team was no longer a thing. Not surprising really, given that most of the original two teams were slaughtered in the Spencer Mansion.

I’ve always been a fan of female leads, especially in the Resident Evil series, and Sheva is no exception. I’m quite disappointed that she hasn’t appeared since RE5, but hopefully she’ll appear again somewhere down the line. Maybe like Jill Valentine did here, albeit in a villainous capacity with which I struggled initially. It was great to see her return though, and that flashback scene in which we see Jill and Chris going after Wesker? Magnificent.

I loved almost everything about Resident Evil 5. As much as I loved 4 back in the day, it rarely felt like a proper Resident Evil title in terms of its design and story to me, but 5 was everything I wanted in that regard. It had the crazy and imaginative creatures, not to mention the Uroboros strain that produced some impressively grim creations, and in my case especially, it brought the original game’s story full-circle and gave me closure on the whole Jill/Chris/Wesker scenario. It closed a chapter of which I had waited nearly thirteen years to see the end.

I love the Resident Evil series, even many of the spin-offs, and 5 remains a personal favourite. Sure, it’s a part of the more action-oriented era that RE4 began, but it somehow retained some of that original DNA and that is why I love it so much. If you can play it with a friend too, it’s genuinely one of the best co-op games out there. It has the same tension as playing in single player, but with the added bonus of being able to really sync with your partner, sharing ammo and weapons, keeping one another alive.

You know what? I really fancy playing it again now. Good job I already have it downloaded on PS4…