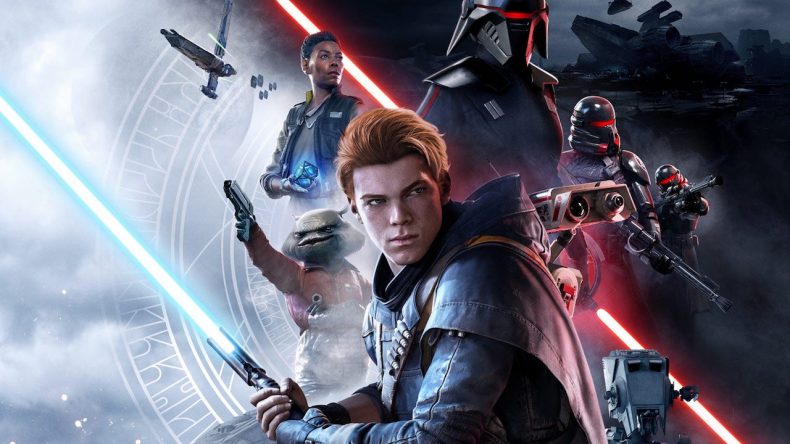 The Star Wars license has taken a bit of a drubbing recently from the gaming press and the general public alike, to the point where even mentioning a new Star Wars game in the wrong crowd would see you dragged out back and strung up by your ears. And a lot of that was in no small way owed to EA, who had managed to utterly besmirch the name with not one but two Battlefront games – games which by rights should have been like the second coming of Alec Guinness.

So how do EA attempt to combat this? The only way they know how to combat anything these days: by using Respawn’s good name and carefully-cultivated relationship with John and Jane Public as both sword and shield. Okay, maybe that’s a bit cynical, and let’s be honest, the Publics are hardly a welcoming couple. They’re more likely to greet their new neighbours with a big old pooh wrapped in newspaper and set on fire than a freshly-baked carrot cake. But then they’re also right to be wary. If you keep trying to stroke a dog that repeatedly bites you eventually it stops being the dog’s fault altogether.

In lieu of a decent segue, just swap “dog” for “Wookiee” in that last bit and we’re onto Star Wars: Jedi – Fallen Order, a title that sounds more like a string of Star Wars themed words than an indication of what it’s really about. But we’re excited nonetheless. Being massive fans of Star Wars and Respawn, there’s more than enough good feeling and bleary-eyed optimism at Godisageek to go around. That being the case, here are 6 reasons we’re excited for Jedi: Fallen Order.

1. It features new worlds and characters

The existing Star Wars canon has always been fairly free and easy with worlds and characters and races. Every property introduces some new planet, moon, alien race or cute little droid design and Fallen Order is no different. While the gameplay trailer takes place on the Wookiee homeworld of Kashyyyk, we’re also seeing new worlds like Bracca, which is where protagonist Cal Kestis begins his adventure.

Played by Gotham’s Cameron Monaghan, Cal is a young Jedi padawan who survived Order 66 and is now on the run. He’ll be joined by a handful of new characters including his droid BD-1, Cere, a former Jedi Knight who looks like she’ll be his mentor character, and the Second Sister, the Inquisitor hunting him down.

2. It has Metroidvania elements

As Cal progresses through the campaign he’ll unlock new abilities and knowledge which can then be applied to previously explored areas to open up new routes and possibilities, just like a Metroidvania game.

This makes a great deal of sense and is actually pretty exciting, as this presents a lot of possibilities for secrets, alternate routes and replayability. 3. It also has Soulslike elements

Nowadays this may be kind of ten-a-penny, but Cal must save at certain specific points, and can only heal by way of his droid, BD-1. With a limited number of curatives, only by reaching these save points can Cal replenish his stock.

A lot of people have compared the combat to God of War for some reason, possibly because you can throw your lightsaber like a bloody great axe, but it’s really its own beast in many ways. More likely the two games it will most closely resemble are The Force Unleashed and Jedi Academy, both of which did a sterling job combining lightsaber combat and force powers.

But Cal ain’t playing around. Watching the combat on display in the E3 demo, he’s quite happy to toss stormtroopers around like ragdolls, slicing people clean in half and basically being a badass. Actually the demo makes the combat look a little too easy – Cal is supposed to be a half-trained apprentice not a Master but, well, he’s a little overpowered.

We’ve seen powers like force push and force pull, as well as the aforementioned sabre toss. There is apparently a combo system but you can mash away if you choose. Respawn themselves have said the combat is easy to pick up but difficult to master. Director Stig Asmussen was director of god of War 3, though, so that makes sense. 5. There is a Hub are and the campaign is non-linear

Cal has a ship, or hitches a ride on someone else’s ship at least, called the Stinger Mantis, which allows him to travel between planets and moons. There are apparently no loading screens, and you’ll travel in real time between locations – which to me sounds like it could become a bit boring. I’m assuming you’ll use this time to catch up with your companions and such.

While you won’t have complete freedom and Fallen Order isn’t open world, you will be able to choose your path at certain points and revisit areas later. The ship acts as a hub area, too, where you’ll be able to apply upgrades and tweak your sabre (different coloured kyber crystals have been confirmed), and you’ll also be able to customise the ship.

6. There are no microtransactions or loot boxes

This is the big one for many people. Producer Blair Brown went on record on Twitter to say that Fallen Order has no loot boxes or microtransactions. This is a major deal, as EA pretty much besmirched the Star Wars name over loot boxes in the Battlefront game and, to a lot of people, this is a deal-breaker.

Having no microtransactions means everything is unlockable or achievable in the game, which is almost unheard in AAA titles and these days. It remains to be seen whether EA will fully honour this claim, but our fingers are well and truly crossed.

Star Wars: Jedi – Fallen Order is set for release on consoles and PC on November 15th, and we’ll try to keep you reliably informed until then. Personally, we can’t wait to experience Cal’s story for ourselves.

Senior Content Editor Mick has been playing games for over 30 years and writing about them for around 12. After drifting from site to site for a while, settling briefly at the now-defunct Made2Game and freelancing for the gone-but-not-forgotten NintendoGamer Magazine, he came at last to rest at Godisageek. Mick has been a reviewer, staff writer and content editor here for some time, while also moonlighting a little for Red Bull Games. He has 4 kids, has written 2 novels, and sometimes even manages to pay a bill or two. You'll usually find him defending the galaxy in Destiny 2, battling evil in Diablo 3, or lurking in the background on Twitter. Find him there @Jedi_Beats_Tank, or on XBL (JediWaster247), PSN (Jedi_Waster) or Nintendo (JediWaster).
MORE LIKE THIS
EARespawn EntertainmentStar Warsstar wars: Jedi Fallen Order