Why GRID Became My Most Wanted Game of 2019 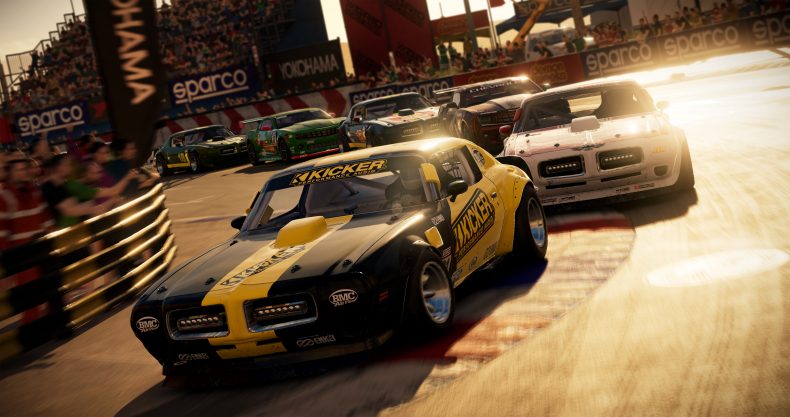 I’ve always enjoyed a good racing game, as you might expect of God is a Geek’s resident racing fan. When I was a kid, it was Micro Machines, Super Off Road and Road Rash. I never owned a SNES, so can’t count Mario Kart as I didn’t play it until much later. When I hit my teens, it was all about the original Playstation’s Gran Turismo, Destruction Derby, Formula One (loved that Murray Walker commentary), Colin McRae Rally and 1997’s excellent TOCA Touring Car Championship, as well as more arcadey affairs like the criminally overlooked Rally Cross. Many of these series continued into the PS2 era, but it wasn’t until the Xbox 360 that my love of racing games truly began.

The game that sparked this love of the race? Race Driver: GRID.

I don’t remember what initially drew me to the game, or why I even decided to spend my hard-earned money on it, but I’m so glad I did. Perhaps it was the distinct art style, with that golden haze over everything. Perhaps it was the ability to race in several different disciplines, effectively mashing together a bunch of different gameplay styles to make it feel like I was getting multiple games in one package. Whatever the reasons, I developed a real passion for Race Driver: GRID.

I rarely played online back then, indeed it wasn’t until probably a year later that I even began subscribing to Xbox Live. However, once a few friends picked up the game during a particularly good Xbox digital sale, some incredible memories were made online. I had already played the game a lot, so I tended to win most races (not bragging, it’s simply due to me having the most experience with the game) but the laughs we had rendered the competition moot. San Francisco destroyed our suspension and steering, Jarama had us laughing at the resident corner-cutter, and Washington provided one spectacular moment including one car flying through the air in a barrel roll, while another passed by underneath in an exquisite feat of daring.

One friend even earned the nickname “Terminal Damage” as not an evening went by, without him writing off his car in at least one or two races. We all laughed when the “terminal damage” message came up on-screen, because we knew who it was without seeing the gamertag pop up.

It wasn’t all about the online though, obviously. I played Race Driver: GRID for hours and hours, going through that excellent career mode. It wasn’t your typical mode either, as you were tasked with earning money by driving for other teams, so that you could eventually run your own team and buy your own cars. Driving for other teams meant that a percentage of your payout would go to them, but you wouldn’t have to worry about the car too much, whereas driving your own car might give you bigger rewards, but at the cost of damaging your own car. Cars weren’t indestructible in Race Driver: GRID, and often you would have to buy used cars for your team. This came with its own set of challenges as you didn’t know how recklessly the car was driven before, only how many races it had competed in and how many times it had been wrecked, if any. During races, icons in the bottom corner would indicate damage and sometimes a used car might wear out quicker than expected, but it was all you could afford early on. Like the original Gran Turismo, the goal would be to earn enough to start buying new cars, sometimes dream cars. The biggest goal in Race Driver: GRID was to earn enough to get your team into Le Mans at the end of a season.

That was one of the coolest things in the career mode, as the end of each season would bring with it the chance to drive Le Mans 24 Hours. In reality, it was probably about 24 minutes, but the game would simulate the transition from day to night, back to daylight for the finish and it was legitimately terrifying at times. Despite the game’s exaggerated physics, in many ways it was the most realistic representation of the world’s most famous endurance race.

It took quite a while for a sequel to arrive, but I still remember tweeting about my disappointment and the GRID account replying with something along the lines of, “you never know what’s around the corner.” That tease had me grinning, as I had waited years for something, anything, that indicated a sequel was coming. Indeed, eventually GRID 2 was announced and I even paid to go to London for the Eurogamer Expo (before it was rebranded to EGX) in 2012 so I could play it. Games like Halo 4, Gears of War: Judgement and Metal Gear Rising were there that year, alongside DmC, the Tomb Raider reboot, Dishonoured and Hitman: Absolution. Hell, the WiiU was there and the lines for that were horrific, all day, every single day of the show. But I was there for GRID 2, to the point that I played it multiple times each day. In fact, it was the first game I played when I got there and the last game I played before I left.

I was so into GRID 2 that I watched the weekly livestreams without fail, and even had my Xbox gamertag featured in official trailers for the game. The community management for it was excellent. To my knowledge, it was also the first game that featured a proper online etiquette system, matching like-minded racers through a sportsmanship-style rating system. It didn’t always work, but without it, I suspect we wouldn’t have GT Sport’s online rating system, which has led to that being the best online racer out there, as a result. GRID 2 had its issues, leading to a much shorter wait for GRID: Autosport, which was released just over a year later. GRID 2 made the mistake of removing assists altogether, creating a more arcadey experience than its predecessor, and although I didn’t mind that, it certainly didn’t feel quite as good as Race Driver: GRID. When Autosport arrived, it felt like a middle ground between the two earlier games, keeping some of the arcadey racing but also adding more realism for those wanting it. It kept both sets of fans happy, though as good as it was (and still is, as I can still play it through the Xbox One’s backwards compatibility feature) it never quite managed to replicate my feelings toward the original game in this trilogy.

Here we are now in 2019, five years after GRID: Autosport released, and once again as I gave up hope of seeing another game in the series, Codemasters recently announced GRID, a new game in the series and the first to appear on the current generation of consoles. Obviously, I was rather happy with this news. Even more so, that its release date is less than three months away. I watched the announcement trailer and I’ve watched as much released footage as possible, all of which has me chomping at the bit for the newest title in the series. I watched the Twitch E3 segment, featuring an interview with various members of the development team, and I found myself even more interested in the game.

For example, how many racing games have you played where the only way to progress, is to win? A top three finish may be good enough, but usually a win is the way forward. Yes, that makes sense in a purely logical way of thinking, but it’s not in the least bit realistic. In motorsport, it’s almost unheard of that a brand new driver would be expected to win every race of their career, so why is it so prevalent in racing games? GRID will seemingly allow anyone to progress through the career. Regardless of where you finish in a race, you will unlock the next event in your current series. Hopefully, this means earning that first win will feel like more of an accomplishment, because you’ve had to work your way up.

On that note, instead of simply feeling like you’re going through the motions, with every overtake feeling like nothing more than a minor inconvenience on your way to the top spot, GRID’s new AI will apparently fight for every single spot on the grid. They aren’t just there to battle you either, as they’re said to be fighting each other throughout the field, in much the same way as an actual race. The thing is, having played an awful lot of F1 2019 and understanding that GRID runs on the same EGO Engine, as well as being made by some of the same team, I would expect nothing less. I would constantly see AI drivers trying to make overtakes against the other AI, weaving out to fill their mirrors and distract them, perhaps “selling the dummy” before switching sides and making the pass under braking. It’s an incredibly impressive sight.

Of course, just because one game works, it doesn’t mean that another will work just as well. Games that run on the same engine aren’t guaranteed to be equally good, but when they’re coming from the same studio, surely there’s a decent chance? The GRID series means a lot to its fans and Codemasters knows this, so it’s only natural for us to expect the best. Let’s hope that we get just that.

Race Driver: GRID was the game that started it all, for me. It represents some of my fondest memories of online gaming, and played a pivotal role in shaping my love of an entire genre. Over a decade later, I’m ready to return to the action-packed world of GRID and its particular brand of cinematic, yet somehow authentic, motor racing. It’s too bad that I have to wait until September for my new most wanted game of the year.