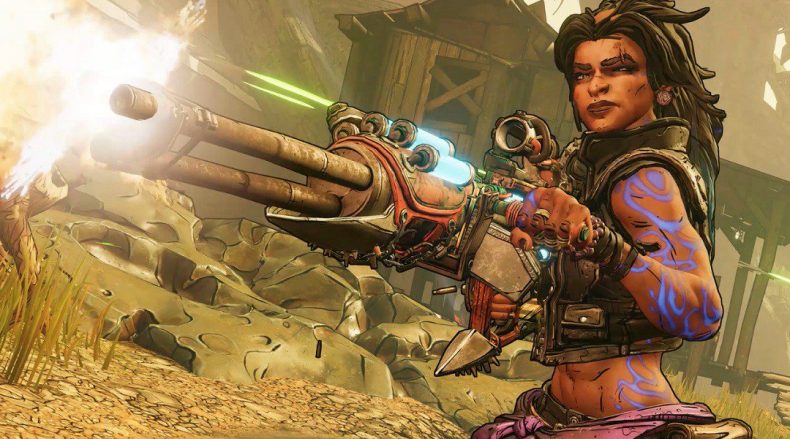 Post-apocalyptic titles are always a hot topic when it comes to gaming, and we’ve seen a hell of a lot of them. From Fallout to Rage to Metro, the industry loves pitting mankind against the odds. They’re a great excuse to allow us to blow a multitude of radiated freaks to kingdom come, and ride across ravaged lands in a multitude of cool as fuck vehicles. The thing is, they’re not always the dog’s giblets. Take Rage 2, for example. Whilst the shooting was good, the open world was dull, and the story was mediocre at best. It felt like it was trying to imitate other games similar to it, but never succeeding. I was really excited for Rage 2, but it couldn’t quite scratch the itch. Thankfully, the king is returning, and if you had any doubts that Borderlands 3 might not be on the same level as its predecessors, then fear not, people. This game will blow your socks off.

I popped down to Windsor yesterday to play two hours of it, and I can honestly say that this feels like the best Borderlands yet. I started off as Amara,and straight away the world is crisper – if a little messed up – and the action wasn’t far behind. It didn’t take long before I was blasting the hell out of the bad guys, finding countless loot, and experimenting with the different guns on offer. One was a shotgun that took out enemies by blowing them 10 feet into the air. The sniper was on point, and with the elemental damage I was able to poison them or switch to fire that incinerated them in a heartbeat. Whizzing around the open environments and ogling the stunning cityscapes of a rather different post-apocalyptic world shows that it’s more about refinement than anything else. Borderlands set the benchmark for every loot-shooter that followed, and whilst buildings still look haggard and worn, there’s definitely a Blade Runner/cyberpunk feel to it. Neon signs and colourful towns are neatly juxtaposed with the decimation of a city left in ruins, and it’s so pretty. The familiar cel-shaded design is here, but it looks so much better. Gun play is similar, but again it now feels sharper, and with so many variations and upgrades, folks are going to enjoy the crap out of this.

It’s also incredibly funny – something Gearbox has always managed to get right. Quips from the very English Amara use a plethora of slang from within our great country, and many of the side characters in Borderlands 3 also provide a humorous gag or two. This just adds to the fun Borderlands 3 want you to have. If you die, you respawn not far away from where you died, and even though some of the fights can prove tricky, it’s not about overcoming almost impossible odds, but rather having a great time blowing the hell out of everything you see without pausing for breath. It was nice to see older characters return in the first demo I played, such as Zer0 from Borderlands 2, but also Rhys Strongfork from Telltale Games’ Tales from the Borderlands, now sporting a sexy moustache. I got to see two bosses as well, both very different in approach and design. Gigamind is only a few feet tall, but has an exo-skeleton with a brain attached in a glass case for a head. He fires off a multitude of bombs and laser beams as you not only have to take him down, but also deal with the hordes of enemies that surround him. The second – Mouthpiece – is confined to a room with huge speakers that expel large waves of sound, and if you get in the way they either wipe out your entire shield gauge, or rip away your health with a single blast. He’s also got a shield that can prove hard to break down, and little mutant enemies that run after you with reckless aplomb. I found my health to be under severe scrutiny whilst fighting them, but with the Second Wind mechanic, I was able to regain health after taking out a few of them.

The vehicles are another plus in Borderlands 3, with the same controls as the Warthog in Halo. Drifting around Pandora felt amazing, as the handling of the Cyclone was especially rewarding. Few games have this kind of freedom when controlling them, making it a doddle to get round tight street corners and evading other raiders as they fire their weapons at you. So far, this game has it all, and it feels good knowing that the best loot-shoot series is ready to get back on the saddle and win the race for dominance. Sure, Destiny did a decent job, but Borderlands is the king, and it won’t be long before it’s wearing its rightful crown once again. My only quarrel with the game so far is the ability to easily compare the loot you pick up with what’s in your inventory. As my hands-on was with an uncompleted version of the game, I’ll reserve judgement until it releases. However, at this point it wasn’t easy seeing how new weapons compared to the old, and that’s something I’d happily see change for this release. Still, there’s no denying that this is shaping up to be the best Borderlands yet, with an all-new aesthetic within the design that made it famous. The gun control and movement is sublime, the humour is in top form, and the enemies are varied, original, and over-the-top in the best way possible.

Video games are cool. Don't let anybody tell you any different.
MORE LIKE THIS
2kBorderlands 3Gearbox Software