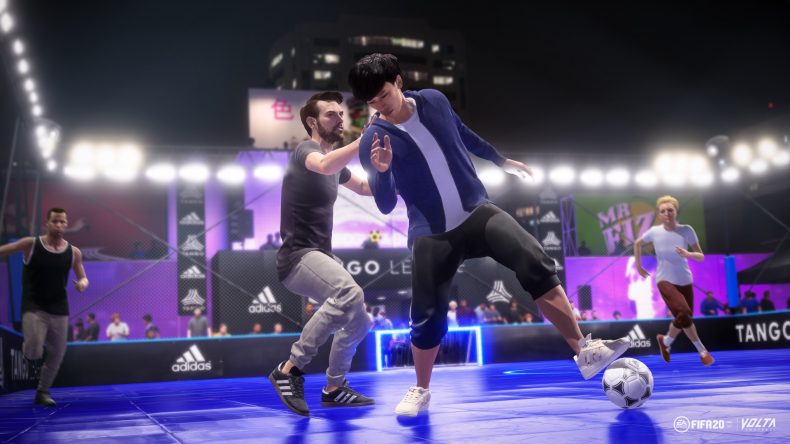 I can count on my fingers the number of times I have played a true competitive 90 minute 11v11 game of football in my life. But ask me to put an estimate on the amount of hours I’ve played football generally and I’d struggle to hazard a guess at how many thousands of hours it has been. From back yard kickabouts to indoor FIFA Volta style five-a -ide and car park 2v2s, my time as a kid was almost exclusively spent playing football, even if it was never in the professional style matches.

When you think of how many people experience football like this then the choice to add in street football, or Volta as EA are calling it, to FIFA 20 isn’t as strange as it first seems. For many people this is what football is to them, and now they can experience it in the digital world, bringing some of the best players in the world onto their local playing fields.

“FIFA is about football, and there’s this whole side of football that we’ve not represented”, says Matt Prior, creative director on FIFA 20. “It’s the side that all of us kind of grew up with as our first foray into football, you know: kicking it about with your mates in the park, or in the back garden. This whole side of football that people can really relate to that we haven’t had in the game, for obvious reasons. So I think it resonates, I think it rounds out the game in the sense that we’re now offering kind of a whole world of football and a lot of different experiences as a result.” Now look, playing on a specially designed rooftop 3v3 pitch in Shanghai with a DJ playing just metres behind the goal isn’t something many of us will get to do in real life, but playing in a green-fenced cage in London or on a larger 5v5 style indoor sports hall pitch is something many of us do on the regular. These three locations, which are just a taste of the multiple options coming with FIFA Volta, were perhaps selected to match the experiences those playing at the event have had, but there is no question that there was a very familiar feel to it, especially the squeaks of indoor shoes quickly changing direction on a polished wood floor, and that makes it, at least at the start, incredibly satisfying to experience.

But go back a few years, in fact all the way back to 2012, and FIFA Street managed to pull off almost the same thing. Back then it was an entirely separate game to the main FIFA offering, but now it almost seems like they have just taken the basics from that game, and put it into FIFA 20. Anyone who put time into the 2012’s FIFA Street will notice more than a few similarities here, especially when it comes to the locations you can play in, but when you are actually playing on the pitch things feel very different.

Whereas FIFA Street was always about pulling off ridiculous skill moves and chaining them together with ease, Volta makes things a little more realistic while still allowing for moments of flair. Unless you are playing with a player who has a strong skill move rating then you are going to struggle to successfully dance through an entire team of defenders. A quick press of the right analog stick will allow you to flick the ball up and hopefully knock it over someone’s head. Pulling off crazy skills certainly feels possible, but it’s not easy to do, especially with low rated players, which can make things a little frustrating when you play with your story mode team that all start off with low kill ratings.

“If we look at Street back in the day that was very much of a different, I don’t like the word but, arcade-y kind of experience, and you could be proficient at Street but then you would transition to FIFA and it was almost two different experiences”, says Prior. “So by virtue of bringing it into the world of FIFA, it offers the opportunity to teach me about how to play the game. And then that learning can carry over to 11v11. Because at its core, it’s based around the 11v11 game engine, there’s certain elements to kind of showcase flair a little bit more, but it’s the same gameplay engine. So this is a good way to kind of transition people, if they want, into the world of 11v11.”

Skills to pay the bills Clearly the more skill based style of play is something EA are trying to bring out in FIFA Volta, but as it stands in the build we played (which could change before launch) it often feels like the least efficient way to play. When playing in the Rush modes, which feature smaller goals and no keepers, the AI opponents sometimes feel a little off, letting one of your players run from one end of the pitch to the other completely untracked and into an acre of space. One simple pass, which feels incredibly easy to pull off when playing on a pitch with walls, will usually put them through to an open goal. So providing you can keep possession long enough for a player to find space, scoring can at times feel a little too easy.

This in turn makes the task of beating your opponent in a 1v1 almost pointless some of the time. You simply have to keep possession, which with the new Strafe Dribbling that slows you down but gives greater control over the ball with more touches, can be pretty easy. The system, specifically in the 11v11 game, is designed to allow you to draw in a defender by slowing down and presenting the ball to them, and then knocking it past them or playing a pass as they move in for the tackle. But in FIFA Volta it’s perhaps best used to slow down the pace until you can play that killer pass into space. Fortunately this feels like much less of an issue when playing a game mode that does feature a goalkeeper. When you have to beat that final person instead of just tapping it into an open net, a defender failing to track a run feels less game changing, as there is still a line of defence. The 5v5 mode with keepers was where FIFA Volta really excelled. It still felt like football, just on a smaller scale, closer to the stuff I played as a kid. Tapping the ball into an empty net is never as satisfying as beating a keeper, so not being able to have keepers on some pitches with smaller nets is a little disappointing.

“It is one thing we played around with, but it makes it a little bit more difficult because there’s obviously a whole bunch of added intelligence we need to add to the goalkeepers”, says Prior regarding the possibility of adding keepers to the smaller goals. “So we’ve got them in the kind of futsal nets, but for the smaller nets there’s another level of intelligence. So we did have that on the want list when we set out, but it was one of the formats we couldn’t get to. Now, who knows what the future holds, because it was a lot of fun. It was a little bit buggy because of the intelligence of the keeper but it was quite a lot of fun. So it’s something we could potentially look to in the future.”

FIFA Volta: Will it have staying power? The key for FIFA Volta is going to be how much staying power it has. Don’t get me wrong, there is a ton of different arenas to play in, multiple different formats, a story mode that will allow you to build a team from low level players to world beaters and a ton of cosmetics to unlock. But my overwhelming feeling was that this will be something you play for a bit in the first few weeks of FIFA 20, and maybe even run through the single player story mode once, but then it will become an afterthought. Some will, of course, get hooked and grind away at the online matches, but for most I imagine the staying power will not be there, and Volta will instead be used as a party game or as stress relief if things aren’t going your way in FUT.

Playing FIFA Volta is great fun, providing you get a competitive match where the AI don’t just gift you free goals through leaving wide open space, and the different styles of play and locations do keep things pretty fresh for a while. But it does feel like, for most players, it’ll be something they won’t keep returning to. It’s a nice addition, and something that is sure to bring in new fans who maybe don’t follow the pro game but still love to play football, but for the hardcore FIFA fans who are most likely to be reading this, it probably won’t be a game changing addition.

Preview based on impressions from an EA hosted event. Published paid transport and accommodation.

eSports! I joined God is a Geek all the way back in September 2013 and since then have spent most of my time on Dota 2, and occasionally posting the odd review, news article or totally wrong predictions for The International. When I am not playing Dota I can probably be seen watching some kind of strange eSport or begging for more Twitter followers (@MikeStubbsy if you are interested). Aside from GiaG I am a computing student, football coach and major Apple fanboy.
MORE LIKE THIS
ea sportsFIFA 20Interview