previous
Arise: A Simple Story gets a release date
random
next
My Hero One's Justice 2 Confirmed With New Teaser and Screenshots
0 comments

GRID may be the most exciting representation of motorsport yet 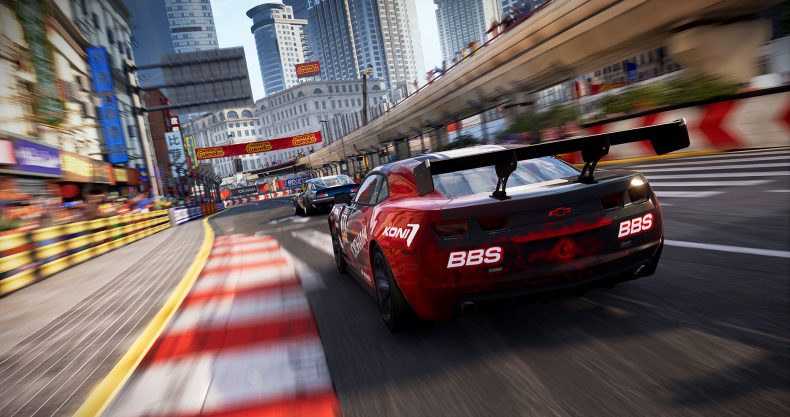 Motor racing is often seen as a boring sport, because it’s usually dominated by technical talk about tyres or aerodynamics. More often than not, people think of F1 with its reliance on pitstop strategies, and there isn’t nearly enough focus on the wheel-to-wheel racing that happens in every form of asphalt-based motorsport. The GRID series has always put this excitement ahead of the pure realism of most sim-based racing games, and it looks like this 2019 reboot is no different. Actually, it’s on course to be the best yet, if my time with it is anything to go by.

Aside from the ability to quickly tune your vehicle, there isn’t really anything in the way of technical jargon in Codemasters’ latest, instead focusing all its energy on making the racing as exciting as possible. Rather than being as in-depth as Project CARS 2 or as technical as GT Sport, GRID opts for a more exaggerated physics model, replicating the twitchy and frantic nature of driving at high speed in tuned, lightweight racing machines with a bit more style. You’ll still need to brake for the Druids hairpin of Brands Hatch, or for the tight, double right-hander that opens the San Francisco street circuit, but you’ll always feel like you’re going that little bit faster than if you were playing a more hyper-realistic simulation. This helps to keep things flowing at an almost cinematic pace, like you’re Tom Cruise and this is Days of Thunder. Only you’re doing more than just turning left. That’s not to say there aren’t stock cars in GRID, they actually make up one of the main disciplines of the career mode. After a few brief glimpses at some of them in the tutorial races, you’re free to jump into the different forms of motorsport that make up the GRID World Series: Touring, Stock, Tuner, GT, FA Racing and Invitational events. You’re given a set amount of money to start, allowing you to buy a car for at least one or two of the disciplines and dive into the racing. Which, honestly, I couldn’t wait to do. It was only after completing several events that I realised I could even rename my driver and team, which also led to me looking into my teammate options and customising my banner.

Teammates have played a big part in the GRID games and here they’re more important than ever. They’ll earn you money for their performance in races and can even help you out, provided you haven’t hired a driver with a low loyalty rating. As you progress and level up, the game will allow you access to more varied teammates, each with their own strengths, weaknesses and personality. Nick Whittle, the starting teammate, is pretty useless. Even Chris Smith, the game’s director, stated as much when I last previewed the game. After checking out my options, taking into account the loyalty, skill, attack and defence ratings of the available candidates, I decided to replace dear Nick with Harper Wright, a British driver who ended up being a fantastic racer. She often finished on the podium and even won a couple of races when I had a bad run, though she did have a bit of a temper. I discovered this when I accidentally tapped the side of her car during an overtake, and I want to stress the “tap” part, as it didn’t even affect her in the slightest, and she got maaaad… Which leads me nicely into a new addition to GRID: the Nemesis system. Bump into someone a few too many times or, in this case, tap your highly strung teammate once, and you’ll get the notification that you’ve gained a nemesis in that race. This makes the already tense racing that little bit more frantic as there will now be a racer on-track determined to beat you, with very little thought for anyone’s safety. They won’t simply smash you into a wall or anything, at least not on purpose, but they certainly won’t hold back and if that means trading paint and denting bodywork, then so be it. This ties into the way the AI works in this new entry to the series, as it’s not just fighting against you (unless you piss them off, obviously). Every racer on the track is doing exactly what you’re doing: trying their best to get ahead of the cars in front. You’ll often see battles on the track, sometimes being able to take advantage of it, sneaking in a double overtake as they’re focused on each other. It feels like proper racing.

That’s what impressed me the most about GRID, the racing is possibly the most competitive I’ve seen in a game like this. At first, I thought it was a bit too easy (I’m not the bragging type, just being honest) so I bumped up the difficulty to hard and I could still win more often than not, but the races were always tight. Especially from my teammate, Harper. She’s an absolute beast on the track. No matter the track, no matter the weather, the racing was exciting. Yes, I mentioned the weather. For the first time in the series, GRID introduces wet weather racing and it really does change the game. It might seem obvious, but cars struggle for grip and it makes the already tense racing even more so. The reduced visibility, especially in the cockpit view with the wipers frantically trying to beat back the rain, coupled with the slick track and the always racey opposition, turns up the excitement (and tension!) to eleven. Driving in the rain just highlights how impressive the handling has been tuned by the team at Codemasters, you can tell that the team behind DiRT Rally 2.0 worked on it. Cars feel both completely under control and yet ready to buck you into the nearest wall should you make a mistake, which replicates the way motorsports really are. Drivers simply cannot afford to relax, because one wrong move will upset the delicate balance of the car and cause it to spin out.

Thankfully, that’s why Race Driver: GRID introduced the Flashback system, and GRID brings it back. Make a mistake, get into a crash or simply want to take a better line through that last corner as you learn the track, and you hit the rewind button to pull back the action a short while and have another crack at it. That said, despite this preview build essentially being the full game, it’s clear that there are still one or two issues that need resolving. Flashbacks can produce one of those issues, as I discovered when I attempted to have another go at a messy corner, only for my car to veer violently into a wall immediately upon resuming my race, without any input from my controller. It was a rare occurrence, but if you’ve elected to limit the number of Flashbacks available to you and your last one just sent you into a wall, you’d be mighty unhappy.

That’s not the only problem I saw, either. Before each event, you have the option to try a one-shot qualifying lap, improve your starting position for that race. No problems there. You’re thrown into a flying lap, control being handed over as the car crosses the start line, so you’re travelling at the optimum speed to begin a competitive lap. The issue I had was when some qualifying events wouldn’t start with a flying lap, instead beginning with a standing start, putting me at a distinct disadvantage as I was already four or five seconds down by the end of the first sector. Even when I had a completely clean, fast drive. It rendered qualifying pointless at those events. Hopefully this is something that can be easily fixed for next month’s launch.

Though my last preview was on an Xbox One S, this was on PC and even before taking into account the difference in hardware, I could easily see the visual upgrade in this build. I played at 1080p with high settings and enjoyed a smooth 60fps experience to go with the shiny graphics, which is always appreciated in racing games. It also speaks to the quality of the PC version. The detail on the cars is impressive, with fully modelled interiors and a damage model that crumples and tears off bodywork with great accuracy. Then there are all the little effects that litter the various locations, from trackside fans and camera helicopters, to fireworks and confetti that punctuate the end of each race. It looks fantastic, though occasionally you will see the textures loading in as the race introduction starts up. Night races and rain are particularly tasty though, and driving through Havana with the low sun still pouring through the summer rainfall? Insert chef’s kiss here. It’s beautiful.

With its few flaws ironed out for launch, GRID has the potential to be as good as Forza Horizon 4; something I didn’t expect any racer could manage, this generation. Instead of the pure realism of Project CARS 2, it relies on a more exaggerated reproduction of motorsport that I would call “sim-adjacent,” which is arguably more fun. Either way, this could be the most exciting representation of motorsport that I’ve seen, which makes me even more impatient for October’s release.