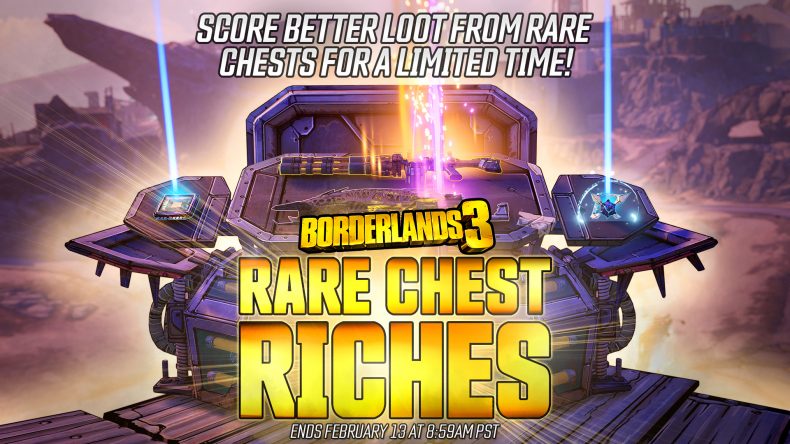 A new two-week mini-event begins in Borderlands 3 today, which aims to increase the odds of players receiving Legendary items when opening Rare Chests.

You can now even score rare loot while watching Twitch streamers play Borderlands 3, in case you can’t get enough of just playing the game yourself. If you and the streamer are both using the ECHOcast Twitch extension, any rewards gained while watching the stream will be waiting in your in-game mailbox when you return to Borderlands 3.

Today has also seen a hotfix that permantently increases the drop rate of Rare Spawns, Hammerlock Hunts and Targets of Opportunity, buffing their Legendary drop rates and Anointed chances. You may already know of the Takedown at the Maliwan Blacksite scaling event, which automatically scales the difficulty depending on party size, will not end today as it should have. This will continue indefinitely, with all future Takedown events scaling by default.

The February update will add a machine to enable True Takedown Mode, for players wanting the original challenge, which was designed with four-player parties in mind.

The Borderlands 3 Rare Chest Riches event is now live on PlayStation 4, Xbox One, PC and Google Stadia, and will run until February 13th.