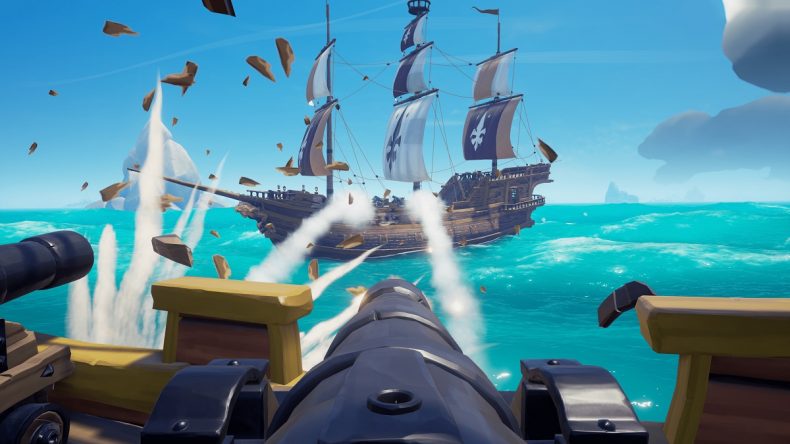 I have played Sea of Thieves since launch, but over the past year I have played it nearly every single day. I am fast approaching the year anniversary of me hitting Pirate Legend, something that took a little time to do, but that I have probably done about six times over since then, so great has my love for this game grown. Initially I had some issues with the way that other players liked to play. I often felt personally affronted when another crew would come upon me and try to steal my hard won treasure, however, over time I have come to terms with what the game is. Now, after putting an unfathomable amount of time into Sea of Thieves, I have become pragmatic when I am bested by another crew and I lose my loot. It is part of the experience. I have finally understood that sailing on these seas rewards your persistence, that there is an unseen skill-curve and a surprising level of intricacy and detail in the level-playing field that Rare has crafted.

Recently, Rare has added a function in Adventure mode whereby you can opt out of cross-play. I play on console, and the option allows me to choose to only be matched with other players who are either on console or who are using a controller to play. So far, I have chosen not to do this, despite PC players having an advantage over me. That advantage manifests in terms of increased accuracy and agility in movement, but also in terms of improved frame rate and faster loading times. I haven’t done it because I relish every interaction I have had in Rare’s wonderful pirate adventure. Besides, I feel that despite a PC player having distinct advantages over me, I have found that more often than not it is strategy and intelligent play that wins far more than an accurate shot fired with the Eye of Reach. A year or two ago, before I became utterly consumed by Sea of Thieves, I spent a long time playing the superb Rainbow Six Siege. What a game that is, despite a sub-section of its awful community. Siege demands your undivided attention, it has a stratospheric skill-curve and a constantly evolving meta, thanks in large part to Ubisoft’s excellent post-launch support in the form of new operators, as well as constant tweaks and balances. Part of my love for that game is that it works best when you are working as a team. I have been fortunate in that I have a few friends who share my love of the game, and over time we became a reasonably successful crew, developing an effective method of communication and able to adapt to different strategies. We weren’t always successful by any means, but the best games were always when we played well regardless of the outcome.

Sea of Thieves gives me the same feeling. Again, I have been fortunate that I have a crew of people (some that I have played Siege with) who I have been playing regularly with, and it shows. Over time we have figured out our strengths and whenever a clash with other players presents itself we naturally fall into our roles. Communication is an absolute must and can be the difference between being successful or losing your ship. Timing is too, choosing the right moment for you to leave the ship to board the enemy or how long to leave the holes in your ship for so that you can have one extra on the cannon for the broadside can be the difference between success and failure. Sometimes fighting directly might not even be an option as you have too much loot on board that you are unwilling to lose. In this situation it becomes a battle of skill. Who can sail their ship better? Who can take advantage of the various strengths and weaknesses each ship type has? Who has the map knowledge to sail to specific areas for a fight weighted in your favour? Sea of Thieves is nearly two years old, and over the time I have been playing I have amassed a number of stories whereby me and my crew have outwitted our enemies. There is the occasion where we performed a bait and switch on an aggressive Brigantine crew (aren’t they all?) trying to steal our Fort loot. A quick decision was made to risk the loot by sailing our Galleon off with a two man crew, leaving the other two to load all the treasure onto a row boat to sell at the outpost. The Brig crew fell for it and chased us halfway across the map to eventually board, realise we had nothing to steal and then high-tailed it back to the fort to see if we had left anything. Meanwhile it was being sold right under their noses. Another occasion saw me and one of my crew on a sloop. We were chased for ages by another aggressive Brig, so eventually we sailed in to the Devil’s Roar area and utilising the sloop’s increased manoeuvrability took our ship near to an erupting volcano then hit the Brig with an anchor ball. Bye bye Brig!

We have had other instances of intense fighting at an active Fort with a closely matched battle where it could have gone either way and we have been victorious. In one battle lasting around half an hour or so of repeated cannon fire, circling and various boarding attempts by both us and them we eventually won. Against an equally skilled crew our victory was essentially achieved through a small amount of luck, but mostly persistence and communication, as well as good preparation as a well stocked boat is one that is much, much harder to sink. There are also times where we haven’t been successful, where a crew crept up on us while we were loading the loot from the fort we had just completed. Their entire crew rowed over from some unknown location, and managed to powder keg our ship before we properly realised what had happened. We accurately guessed that they were trying to steal the loot on the row boat so rather than giving chase to their ship (another Brigantine in case you were wondering) we scoured for their row boat, nearly catching it Golden Sands Outpost. On that occasion we weren’t successful, but the interaction of trying to find the needle in the haystack of a row boat ladened with treasure and fight off the ship protecting it was exhilarating, and an experience I won’t forget for a while.

In all of these interactions the attacking crews have been PC players. Players who I assume have been using a keyboard and mouse, and have most certainly had the benefit of quicker load times. But despite that, I have had a fantastic time as in each occasion it hasn’t been those things that have lead to success or failure, rather it has been intelligent, strategic play and a sense of synergy between me and my crew crafted over hours of play, and in some cases years of playing together in other games that has been the deciding factor. On the face of it Sea of Thieves is a simple game with a cute, cartoony aesthetic, but scratch under the surface and it can be a surprisingly deep team-based strategy game.

Likes to shoot stuff and wear pretty shoes. Is a BEAST at Titanfall.
MORE LIKE THIS
Rainbow Six SiegeRareSea of Thieves