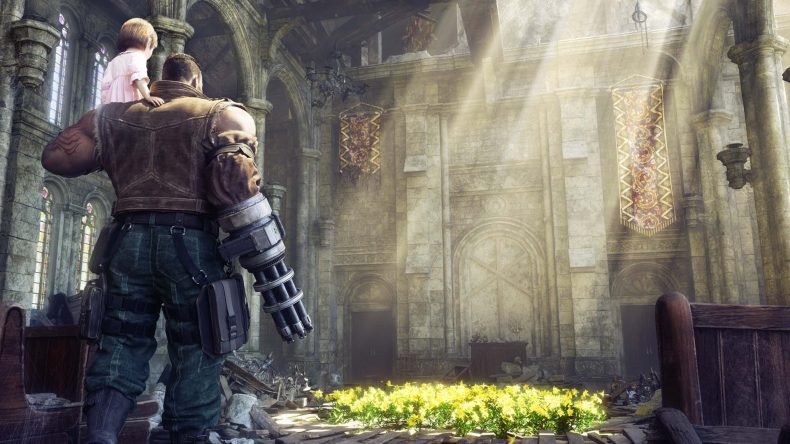 Final Fantasy VII Remake is no longer a mystery. We’ve played it, and we are more than hyped for the game’s final release. Although we’ve only played around three hours, that’s been enough to see some of the exciting things it’ll have in store when it releases on April 10. We’ve put together a list of what we loved from the impressive visuals, satisfying gameplay, and new inclusions that have us keen to play more. Here’s 7 reasons you should be excited for Final Fantasy VII Remake. The Final Fantasy series has always had some fantastic music, but Final Fantasy VII Remake has already got an awe-inspiring score that shows plenty of promise. Naoki Hamaguchi has said that the same melody will be used throughout the game, but during different sections i.e. during battles or whilst roaming Midgar, that music will be extemporised on to create a range of different emotions. Whether you’re battling one of the game’s bosses, or experiencing one of FFVII Remake’s emotional moments, that same music will feature in a different arrangement with new instrumentation, meaning it’ll be both familiar and stirring regardless of what’s happening. As you know, Final Fantasy VII Remake has a full acting cast behind the characters, and unlike the original, we now have a voice for guys like Barret and Sephiroth. From the preview it feels like they’ve nailed it. Aerith’s sweet nature, Barret’s surly and tough persona, and Cloud’s no nonsense and confidence have all been brought to life. The story of Final Fantasy VII easily holds up today, over 20 years since it first released, and now with a full voice cast it’ll be even more emotional when the game reaches some of its most powerful moments. Seeing Sephiroth for the first time was chilling, and fist-punching the air when Barret rallied his AVALANCHE cohorts was awesome, so getting more of that is going to be amazing.

3. The parallels of a masterpiece When you hear the term ‘remake’ or ‘remaster’, it can lose its meaning what with so many happening throughout the current gen’s lifespan, and there only being a handful of games worthy of feeling like they’ve truly been remade. Final Fantasy VII Remake has been completely remade, much life Resident Evil 2 was last year. This is obvious, I know, seeing as the original released on the PSOne, but so much care has been put into making this a completely new game it’s unreal. However, with the remake, Square Enix has done such a fantastic job of keeping much of the original part of it. From certain camera shots from original cutscenes to the locations of pathways and computer terminals remaining exactly the same, they want to make sure this is a new experience with an uncanny familiarity that will please old and new fans alike.

4. Fight for your right to party Whilst Classic mode allows you to utilise the turn-based gameplay of the original, Final Fantasy VII Remake’s new combat makes for a much better way to play. The ease of choosing how to fight for each character in your party not only makes the battles look good, but brings a new level of combat that feels amazing. Basic attacks are easy to pull off (simply by pressing or holding in Square), but so are your special abilities, and with the game slowing down the fight so you can take a bit of time to choose what special ability you want to use means you have some leeway before any damage gets done to you. Also, with a quick touch of the D-pad, you can switch between party members, allowing you to harness their skill set so that you can focus on different enemies within a battle that might not be reachable with a melee attacker. Summons have always been a big part of the Final Fantasy franchise, giving you a much needed boost when you’re struggling against a particular boss. During an Air Buster fight in Chapter seven of the FFVII Remake, I finally got to experience first-hand how they work. I summoned a Leviathan, and my word, it was beautiful. This gargantuan sea monster rose from the ground and stood so tall and majestically that I forgot I was playing. Not only did it help to do copious amounts of damage, but the creature’s animations were astounding, highlighting how well Square Enix has utilised the Unreal Engine.

6. The face of beauty Seeing as though we’re talking about visuals, I can’t even begin to say just how good this game looks. The first time I saw Aerith up close, I almost shed her tear. You can see the pores in her skin, the thousands of her hair strands blowing in the wind, the twinkle in her eye as the light reflects off her pupils, and the pastel colours of her warm and gentle face make you feel as if you can almost sense her next to you. It’s breath-taking. Of course, Cloud, Barret, Tifa, and Sephiroth also look this detailed, and throughout the preview I kept pinching myself to check whether I was actually playing Final Fantasy VII Remake or whether this was just some dream where you wake up from disappointed. The visuals don’t just impress when it comes to character animations. Although I didn’t get to see much of Midgar, I was treated to some of the city after the wake of the Mako silo explosion. NPCs are frantically searching for family members, and crying out following the ‘terrorist attack’. The streets are filled with shops and buildings heavily detailed with signs, textures, and colour. During the presentation at the start of the event, Kitase and Hamaguchi showed off some images of what to expect from the city of Midgar, and we’re going to get to see a lot, such as lush forests, bustling city life, mountain ranges, and more. Regardless of the limited nature of what I saw of Midgar, the interiors of the two silos are stunning, from the corridors to the various rooms lined with machines and spare parts, the detail is staggering.