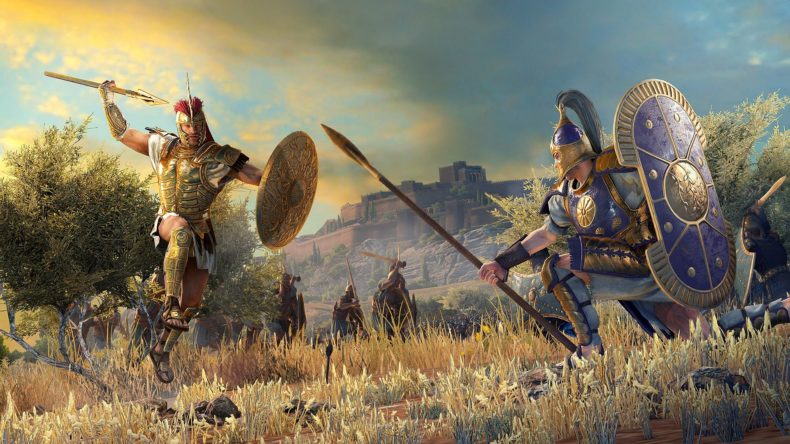 A Total War Saga: Troy introduces a new Multiple Resource Economy that you will need to manage to have any chance of succeeding in your quest for power and domination. With five different resources to manage, things can get complicated and difficult without the right strategies. Here at God is a Geek, we’ve compiled a set of tips and tricks to help you not only understand the new A Total War Saga: Troy resources, but how to get hold of them quickly to help fund your expansion.

Food
Food is the lifeblood of your empire, as it literally keeps your people alive. It pays for soldier recruitment, as well as a majority of their upkeep too. Whilst food will be the sole cost for basic units, you’ll often find it’ll still have a higher cost for elite units too. As such, for those aspiring to amass a fearsome army, having a large supply of food is critical. Food is also a key cost during sacrifices to the gods for their Favor. Should you wish to benefit from Divine Will, you’ll be needing food above simply what your armies need. 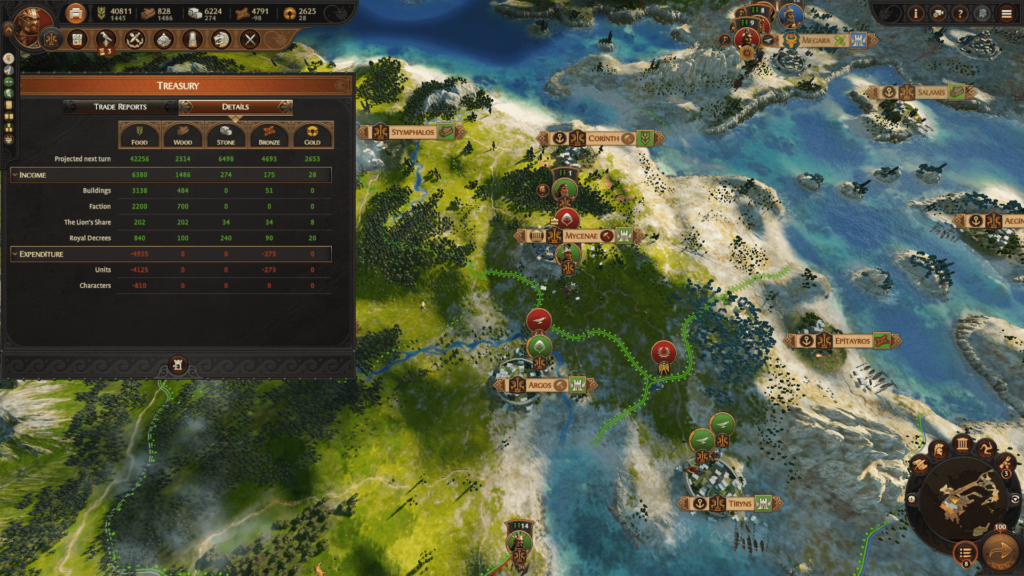 Wood
As you can probably guess, Wood is mainly used in construction. Most of the buildings you wish to construct and upgrade are likely to require wood, so it is important when looking to improve your current settlements. It’s also worth noting that as you expand your empire, you will need more wood to help build up your ever-growing settlements and provinces, so wood will become a more vital resource.

Stone
Stone is very similar to Wood in terms of its use. The main difference is that it is rarer, meaning in all likelihood the amount of Stone you have will be lower than your Wood count. As such Stone is often used in more premium buildings, and is therefore just as essential as Wood.

Bronze
We’re now getting to the scarcer materials. Bronze is mainly used in training (and kitting out) more elite fighting units. As such, should you wish to create tougher armies, you will need a decent supply of Bronze to keep them maintained.

Gold
The rarest resource in the game, Gold is also used on elite military units. You’ll also need it to direct your Agents to implement some of their dastardly tactics on the enemy or to give your own empire a boost. You’ll also find Gold is a heavily used resource during Diplomatic negotiations, and so it is worth keeping this topped up to give yourself more leverage when bartering for power. 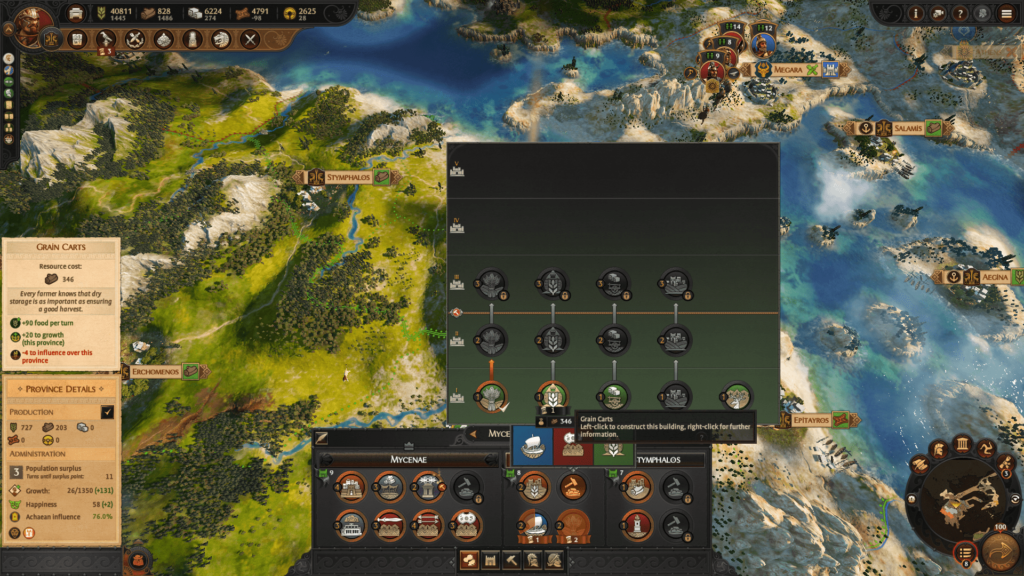 Negative changes will be because you have a high resource upkeep. So for Food that might be because you’ve recruited more soldiers than you can afford to sustain, or with Wood and Stone the same might be true of buildings you are trying to build or upgrade. Having a negative change is fine for a short period of time, you just need to make sure that your overall balance stays positive, because when that happens you’ve actually run out of a resource, and that creates problems for all areas of the game requiring that resource to function.

How to Grow Your Resources

The simplest solution is to understand how to get resources in A Total War Saga: Troy, and we’ve discussed the methods below to get your resource coffers bulging:

Each province will be made up of a centre and then two surrounding regions. Each of these regions will be dedicated to one of the five resources of the game. Choosing which areas to invade and capture based on this resource is a very tactical consideration. Ensuring you have dedicated regions for all the five resources is a surefire way to success.

But simply occupying and controlling those regions won’t be enough. It’s also worth considering how you build up that region. When constructing you’ll have two options for building, to either focus on military or resources. Generally speaking, the best option would be to focus on the resource option to maximise your income. 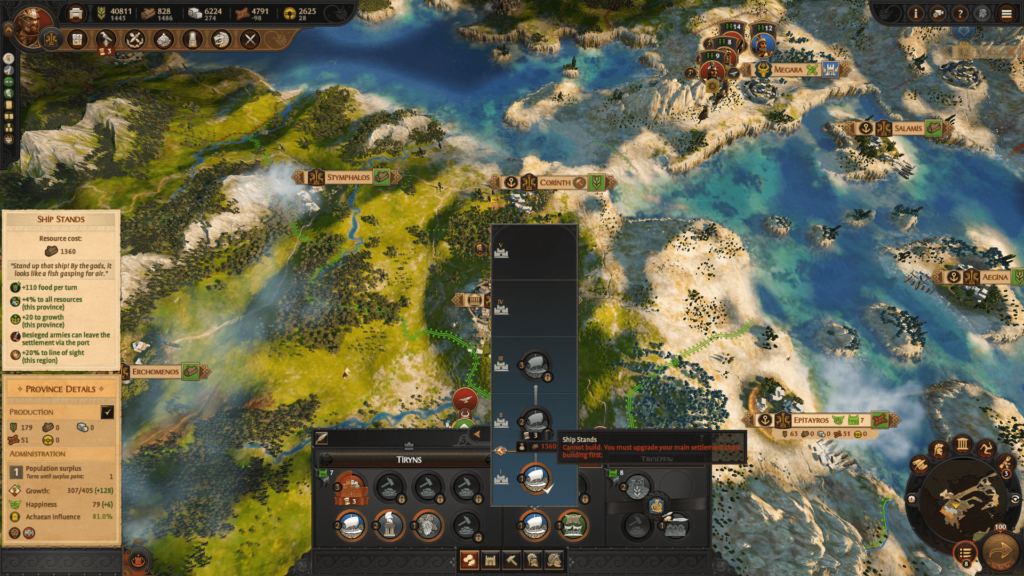 You’ll have five different options of a resource building, each with pros and cons and you can only build one of each type in a province. Some give you bonuses for having high Influence in the Province, others offer you an extra resource-specific bonus, but will damage your Influence. Another will increase all the resource gain in the entire province but reduces Happiness. There’s even an option to just give a high return on the resource only, but it isn’t upgradeable. Go with whichever options suits your current position, but wherever possible be looking to build and upgrade resource buildings because they pay back in the long run.

The only other option when building in regions is if it is situated on the coast. If it is, there will be another construction option called a Port. These provide food, so are great for supporting your military, but they also increase the resource generation of the entire province, and so are always worth considering if you have the option. They also provide some additional military bonuses as well which is a nice touch.

The level you can upgrade your Port or resource buildings to is dependent on the Citadel Level (if it’s the Province Capital) or Minor Settlement (for a Region). If you can afford it, always look to increase these to give you more upgrade options. They also provide additional resources themselves, and so will pay back their cost over time too. 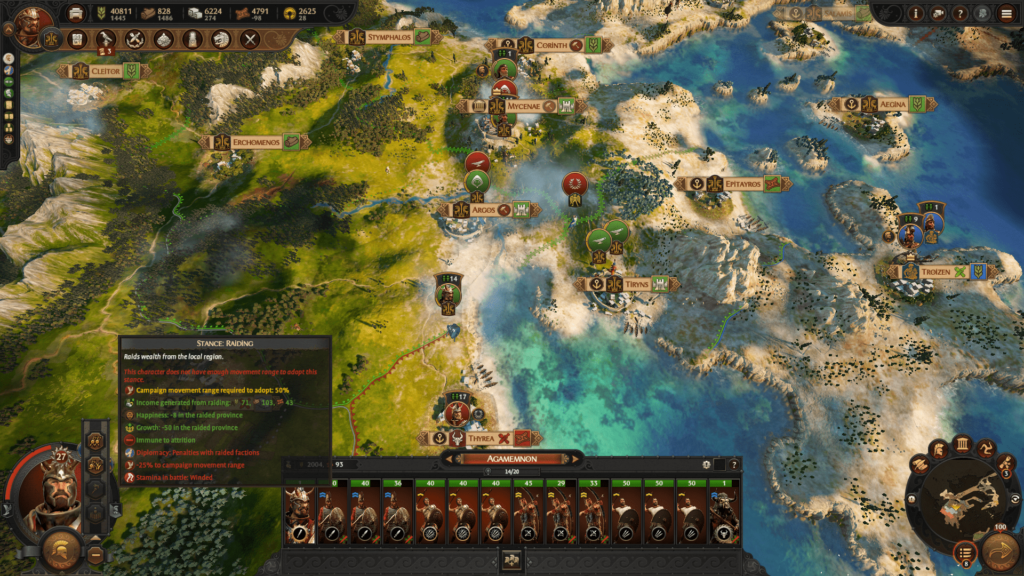 As well as expanding your empire, battles themselves can also yield resources. A victory will often seal you some food and maybe some building materials to add to your stockpiles. As such a battle you’re confident of winning (that doesn’t unnecessarily come with diplomatic consequences!) is well worth it for the resource rewards you can get.

After a battle is resolved you can also make choices that could net you some further resources. If it was a battle in the field, you can choose to either kill or take the losers captive. However, if you choose to release them, you’ll gain some additional resources depending on the size of the scalp you killed. It won’t be a large amount, but can be a nice little bonus if the other captive options don’t appeal.

For those battles that involve settlements, you have different options around how you want to treat your victory. You can simply choose to occupy it, incurring the least cost. However, if you are less interested in occupation you could choose more barbaric options such as sacking the area for loot, creating public disorder. Alternatively you can raze the area to the ground, which can be devastating, but beneficial to your pockets in the short term. Generally speaking, if you’re not interested in expanding to a territory, then definitely consider sacking or razing as it benefits you greatly from a resource perspective, and causes damage that your enemies will need to pay to repair.

The final military option at your disposal is raiding. You can do this with a Hero in an enemy territory if they have enough movement points left to adopt a Raiding Stance. Whether you adopt the stance or not, you can see what the resource that you will gain is. There’s also the added benefit that it disrupts the Happiness of the province which will frustrate your opponent. It does mean one of your armies will be occupied meaning they can’t support elsewhere, so think carefully before Raiding. They will also have a movement deficit should they be attacked in Raiding Stance, so wherever possible do it from relative safety to avoid an avoidable defeat. 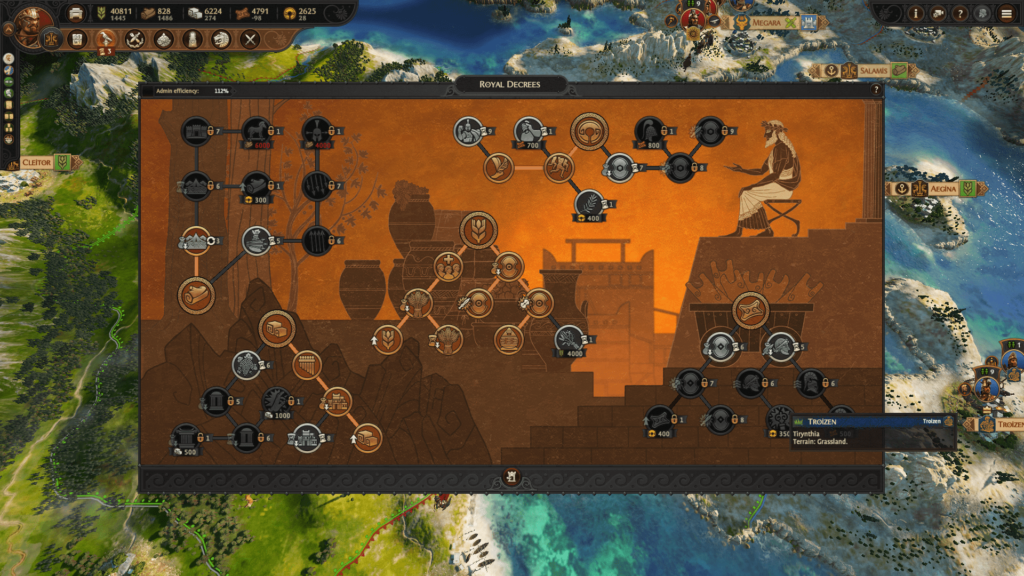 In A Total War Saga: Troy you can issue Royal Decrees, each of which is attributed to one of the five resources in the game. Each one takes a set number of turns before it becomes a reality. Whilst most don’t directly impact resources, the initial decree in each resource tree definitely does, so it’s recommended to unlock these first. There are also others towards the bottom of the trees that add to your resources each turn, so if you want those bonuses, focus on unlocking the branches to them as soon as possible. And it goes without saying that as soon as a decree is resolved, make sure that you select another one to start that turn to avoid any downtime.

Diplomacy is perhaps the most obvious solution to your resource issue. There are many factions and warring parties in A Total War Saga: Troy, and there will always be someone who has what you need. Gold is highly sought after in Diplomacy so if you have set up a decent income of that, you can offer barters to other nations for large swathes of more common resources in exchange. Go after those factions that have amassed large amounts of the resource you want and have a decent relationship with you to strike deals more easily.

As you expand and become more of a threat, you’ll often find various factions, sometimes halfway across Ancient Greece, are willing to give you a large amount of resources for the promise of peace. If the agreement is unlikely to impact your current conquering, then accept them for the resource benefit, and move on with your more urgent battles closer to home.