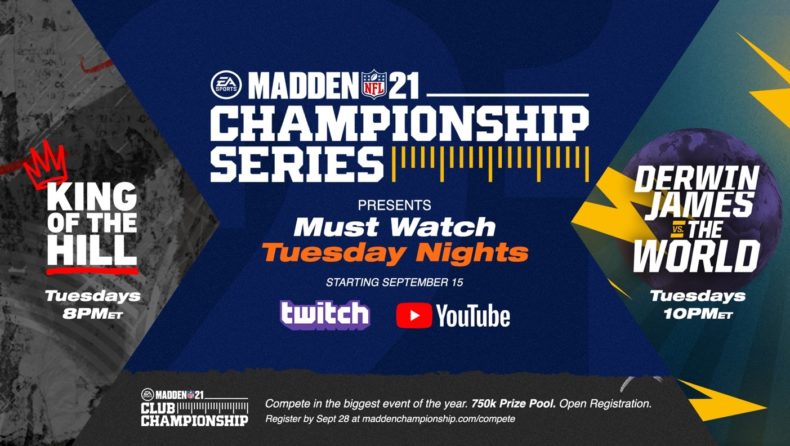 EA and the NFL have announced a new format for their eSports content, and this September Madden Must Watch Tuesday Nights combine competitive play and celebrity appearances for a new weekly entertainment program.

“”Our world has drastically changed over the last few months, yet the love of competition and sense of connection that comes through games is stronger than ever,” said Matt Marcou, Madden NFL Commissioner. “This year Madden NFL will add several new formats, beyond our traditional tournament series, to appeal to an even broader audience. We believe that this is the most accessible and engaging competitive gaming content ever for both players and fans alike and is just the beginning of a new era of competitive gaming.”

“The Madden brand continues to provide a tremendous way to connect with NFL fans around the world and especially the younger demographic who are often passionate gamers,” said Rachel Hoagland, Vice President, Head of Gaming & eSports for the NFL. “We are excited about the new format for the EA SPORTS Madden NFL 21 Championship Series which should raise the stakes for competitive play and offer a new level of engagement for players, fans and our partners.”

The programming lineup kicks off on Tuesday, September 15 on the EA SPORTS Madden NFL Twitch and Madden Competitive Gaming YouTube, headlined by Derwin James vs. The World. Over the course of 16 weeks, a different celebrity, musical artist or athlete will challenge Chargers’ Safety Derwin James, who also doubles as one of the best Madden NFL players in the NFL, in Madden NFL 21 each week. To cap the season, James will take on the winner of this year’s Madden Club Championship.”

The idea of a Madden variety show to watch each week is great for fans, and I hope that Madden Must Watch Tuesday Nights is a great success.