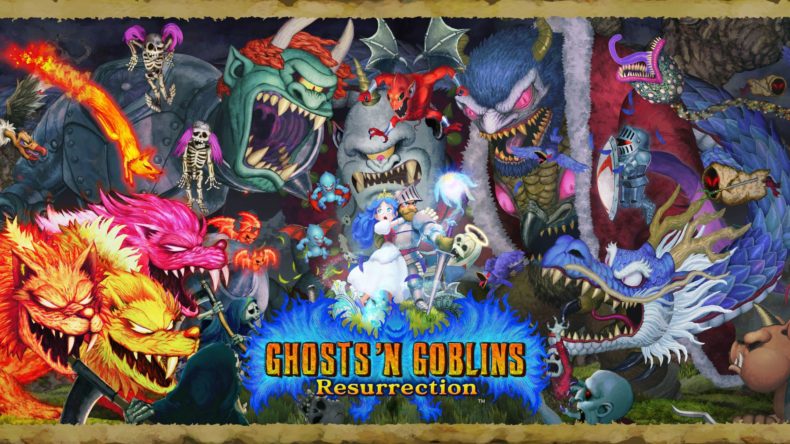 These days the rise and rise of the “masocore” (still a stupid word) genre, or sub-genre I suppose, has managed to trick younger gamers into believing that games being hard is a fairly new concept. However, those of a certain age will remember what it was like to not only play with limited lives and continues, but to have to figure your way through a game without YouTube walkthroughs and a wiki page on-hand.

Games being hard back then was kind of the point. Few promoted replays except to attempt a speedrun, and if they’d have been easy we’d have smashed through them in no time and wouldn’t have lingered as long in our efforts. Games easily beaten were easily forgotten.

I was four years old when Ghosts ‘n Goblins was released in 1985, and so my first real experience of the franchise was in the slightly-evolved but quite similar Super Ghouls ‘n Ghosts – but the core concepts were the same despite a little more balancing. These were games built for “one life each” sessions with friends and siblings. 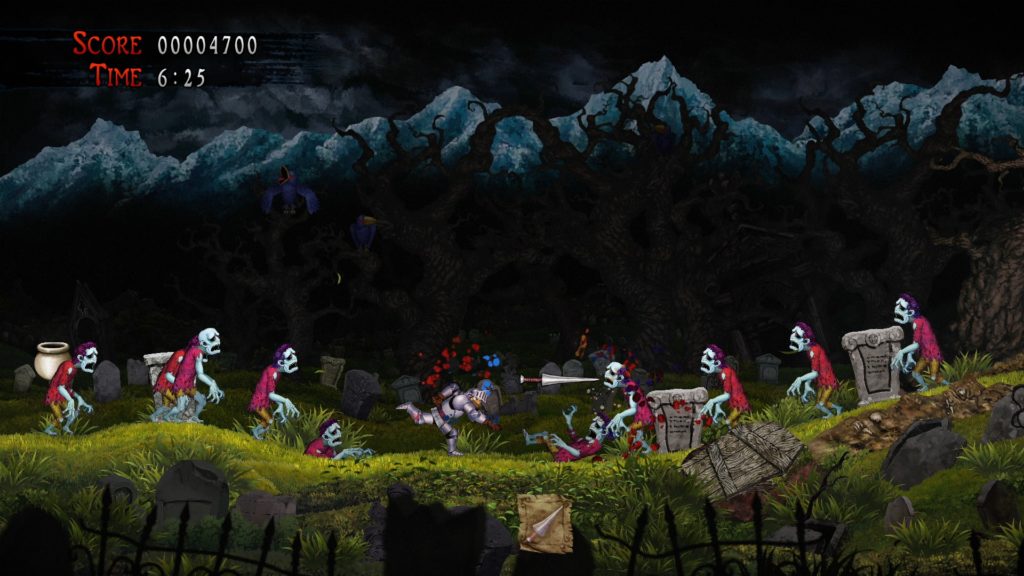 Being older now and sporting the bleached skulls of several Souls-likes in my trophy cabinet, I assumed I’d have less trouble with Ghosts ‘n Goblins Resurrection. How hard could it really be for a seasoned gamer such as myself? Answer: bastard hard. Though part of it, I swear, is down to conditioning. 2D platformers these days often favour speed, momentum and precision, whereas in Capcom’s remaster if you’re not acutely aware of the placement, move list, and speed of every enemy, and if you can’t perfectly gauge the distance of every jump, you’re going to die an awful lot.

This is a game that simply doesn’t want you to succeed. As heroic knight Arthur, your task is to save Princess Prin-Prin from the evil forces who have abducted her. While I won’t go too deep into the backstory in this preview of Ghosts n’ Goblins Resurrection, this essentially involves jumping, ducking and hitting things while avoiding a multitude of unseen, unexpected traps, and fighting bosses that have such subtle triggers and seemingly random routines that they’re almost impossible to predict and beat first time.

To call it hard would actually be a gross understatement. The default difficulty is the hardest, known as Legend, which slowly decrease in overall difficulty down to Page, which is basically immortal mode where you just keep running and winning. I tried it on Knight and eventually settled on Squire, which is only one setting up from humiliation, and I still found it frustratingly difficult at times. Often, though, not because of the game but because I misjudged a jump or tried to leap something on impulse when I should have turtled under it. What I will say is that, from what I’ve played, the checkpoints are pretty well spaced. 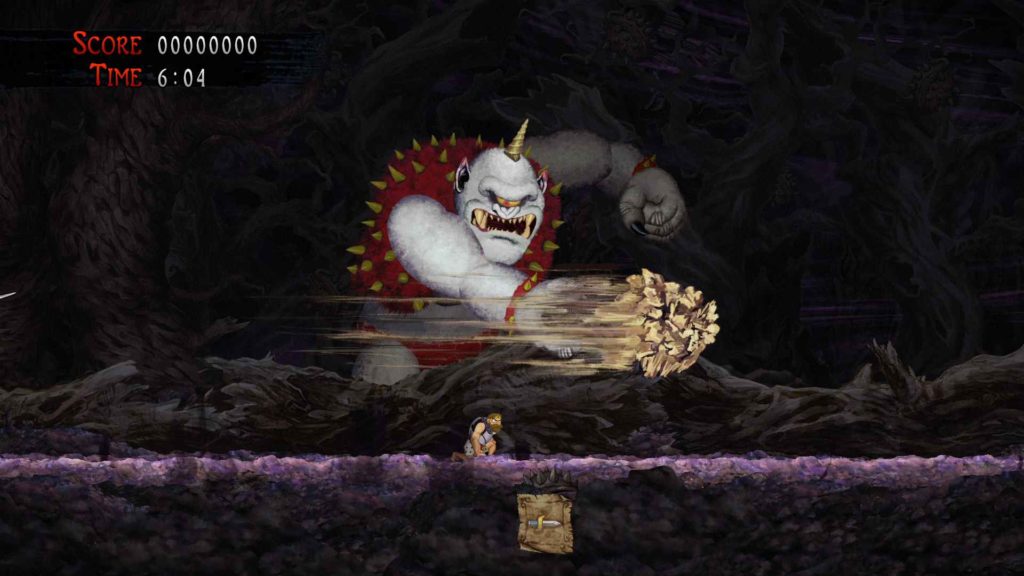 Without being told what’s new and what isn’t I’d have struggled to remember, but Capcom has made some changes to the content if not to the core mechanics of gameplay itself. For example, you may choose from two paths through the campaign, Graveyard or Execution Grounds (lifted from Ghouls ‘n Ghosts, the first sequel). Both are as tough as one another and feature a borderline-insanity-inducing boss fight at the end. For me, these fights are the closest the game ever feels to unfair, as trying to read their attacks and stay alive when Arthur, at this point, can only really weather a few hits before collapsing in a pile of bones, is incredibly tough.

You’re only able to run, jump, duck and throw lances or daggers, or utilise the new weapons and, interestingly, magic attacks that you can unlock between stages. Triggering these attacks takes substantial time, however, and I often died mid-cast – to the point that I kind of stopped bothering with them. Their efficacy against bosses is questionable, and you really don’t need them during the stages themselves any more than you need to focus, take your time, and know your limits. 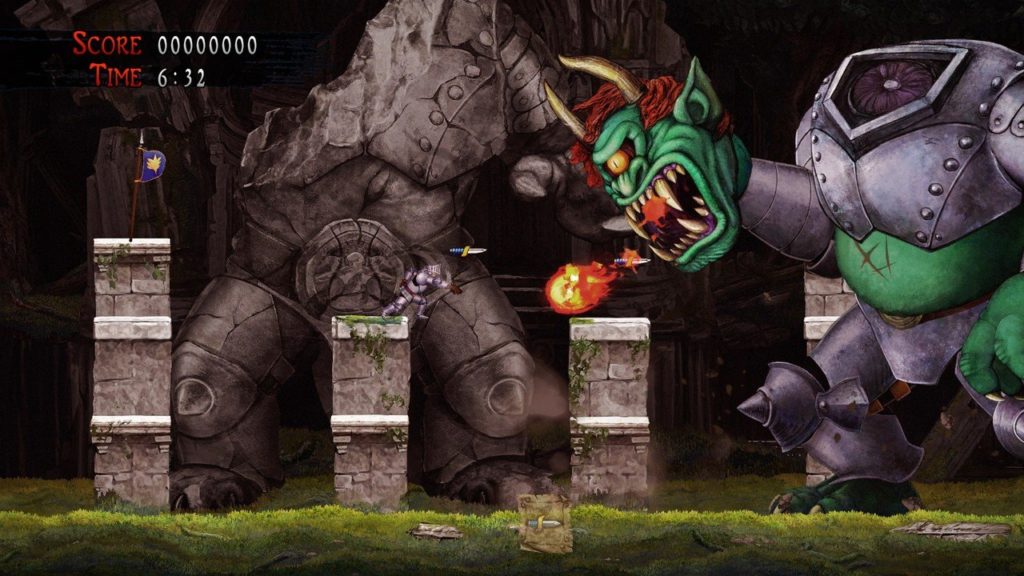 Once I’ve played more and unlocked more of these new abilities I’ll have a better understanding of how to integrate them into the gameplay, and by then I’ll have found some kind of rhythm. At present, it’s a bit of a war of attrition where I often find myself sprinting madly to the next checkpoint flag in nothing but my pants because all my armour has been smashed off by birds, zombies or skeletons.

Right now, from what I’ve seen, Ghosts ‘n Goblins Resurrection is here for two types of gamer: those who crave a nostalgic rush playing a game that first saw the light of day 36 years ago and hasn’t had a sequel in just under half that; and those who just want a game to really challenge their instincts and reflexes.

Senior Content Editor Mick has been playing games for over 30 years and writing about them for around 12. After drifting from site to site for a while, settling briefly at the now-defunct Made2Game and freelancing for the gone-but-not-forgotten NintendoGamer Magazine, he came at last to rest at Godisageek. Mick has been a reviewer, staff writer and content editor here for some time, while also moonlighting a little for Red Bull Games. He has 4 kids, has written 2 novels, and sometimes even manages to pay a bill or two. You'll usually find him defending the galaxy in Destiny 2, battling evil in Diablo 3, or lurking in the background on Twitter. Find him there @Jedi_Beats_Tank, or on XBL (JediWaster247), PSN (Jedi_Waster) or Nintendo (JediWaster).
MORE LIKE THIS
CapcomGhosts n' Goblins Resurrection