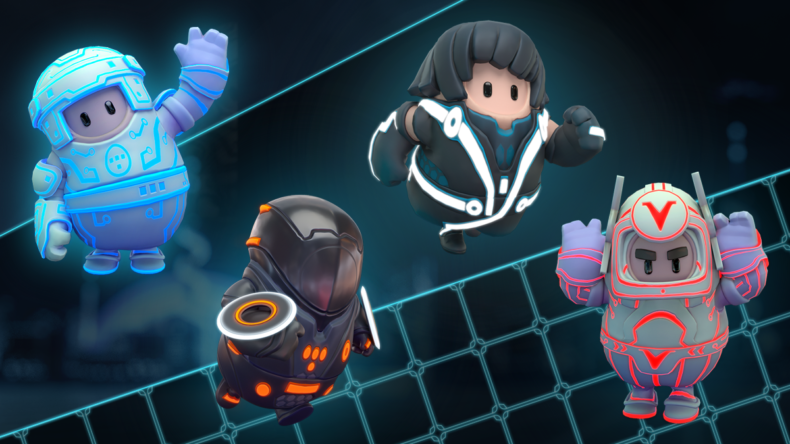 Mediatonic and Disney are teaming up to bring Tron, Quorra, Rinzler and Sark to Fall Guys in jelly bean form.  On May 24, players will be able to deck out their character in an array of iconic Tron film costumes.

Fall Guys flings hordes of hyper-colourful contestants together online to compete through round after round of game show mayhem. The game now has over 40 million players across PC and PlayStation.  The collaboration also coincides with Fortnite re-featuring their retro-futuristic Tron outfit collection from Chapter 2, Season 5.

Jeff Tanton, Creative Director, Mediatonic had this to say:

“Tron is the timeless family tale of sentient computer entities, compelled to compete against each other in rounds of ruthless competition under the guidance of mysterious Users.  So of course, it was almost impossible for us to draw any clear parallels between this Disney classic and the neon-drenched wonderland of Fall Guys: Ultimate Knockout – Season 4. Fortunately, the good people at Disney agreed that the Tron costumes just looked super-adorable, and that we should go ahead anyway.”

Tron, the quintessential sci-fi action-adventure franchise, was originally released in 1982.  It chronicles a hacker’s journey into the mainframe, battling for truth within the Game Grid. The Oscar-nominated film’s cultural impact has resonated globally, and alongside 2010’s Tron: Legacy, has helped define a vision of the digital future in the popular imagination—as evidenced with Fall Guys Season 4’s fluorescent, playfully technical aesthetic.

The Fall Guys and Tron collab will be available on May 24, 2021.  Available to play on PlayStation 4, Nintendo Switch, Xbox One, Xbox Series X and Series S, and PC.