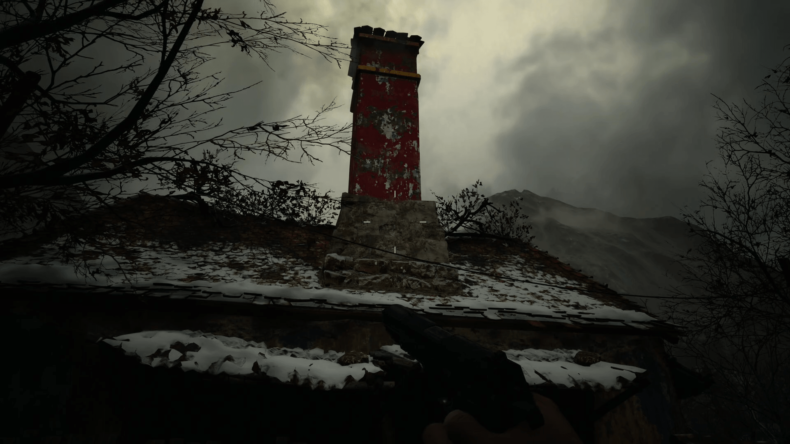 One of the trickier puzzles to solve in Resident Evil Village is where you have to locate the house with the red chimney in the village. It’s not clear right away where you need to go and the village itself can feel a little bit like a maze to explore, especially with its various locked doors and blocked passages. If you are struggling to figure out what to do, then follow our simple step-by-step guide. It’ll help you find the house with the red chimney in Resident Evil Village in no time.

After defeating Lady Dimitrescu atop the castle, you’ll find yourself wandering back towards the village. Here you’ll meet the Duke again who will share some valuable information about where to go next. After a bit of dialogue, he informs you that you need to locate the house with the red chimney which can be located on the West side of the village. The problem is if you’ve explored thoroughly in the village before you’ll no there’s no way to access this building currently. However, a couple of things have changed since you were last here, that can be difficult to notice right away. Destroy the padlock on the red gate (with your knife to conserve ammo) blocking your path back to the village and move forward. 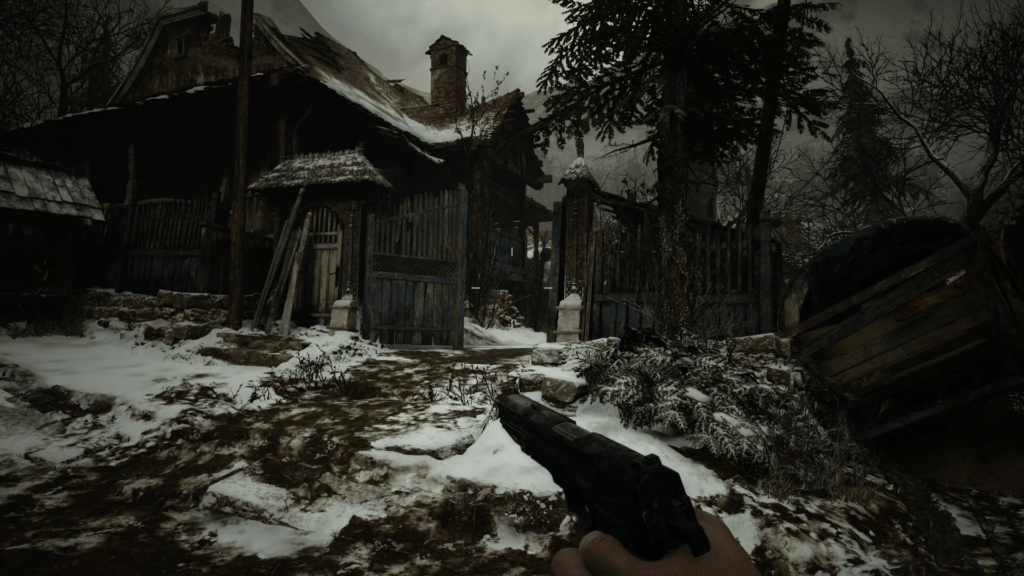 What you may not notice, which is key to solving this puzzle is a new gate has now opened in the village that was previously locked. The gate you are looking for is directly ahead of you, past the Maiden of War statue. Proceed forward through the gate, and you will hear various noises, telling you you are on the right track. If you go past the first building on your left, you’ll find a stable, and hear other disturbing sounds. Sadly the gate here is locked, so you will need to find an alternative path through. 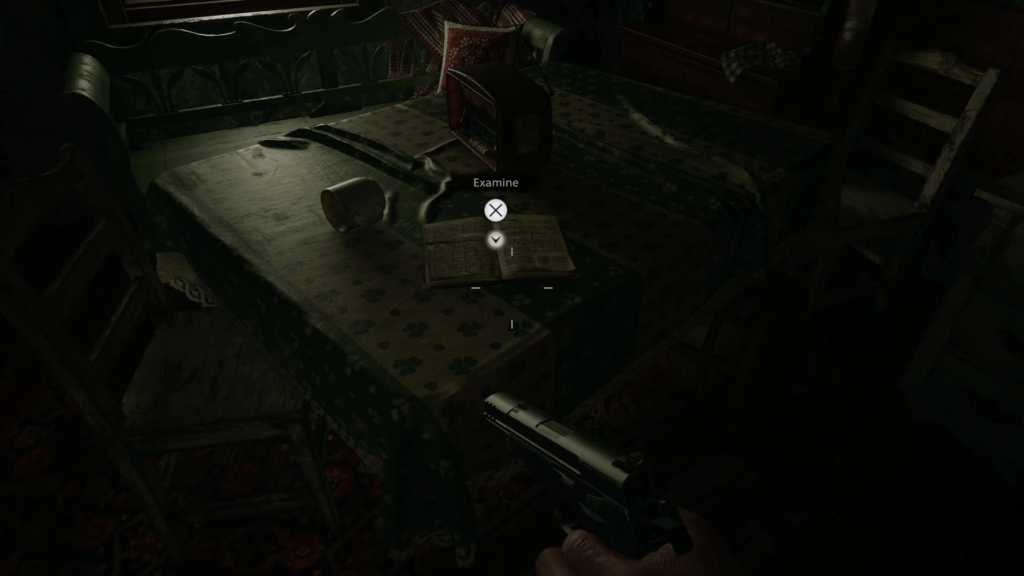 Make your way back to the house you just passed and wander up the steps and proceed into the house through the red front door. Inside, you’ll see a note flashing in front of you. Go ahead and read it because it details what you need to do next.

I heard a scream from the house with the chimney.

I was going to take a look but the way was blockedby debris. Going to have to take the long way around. Who would have thought the hole in the stable walls would come in handy…

If I’m not back by morning…you should go to Luiza’s house alone.

After you’ve raided the house for items, you need to exit it out the back, through a couple of rooms.

A hole in the wall 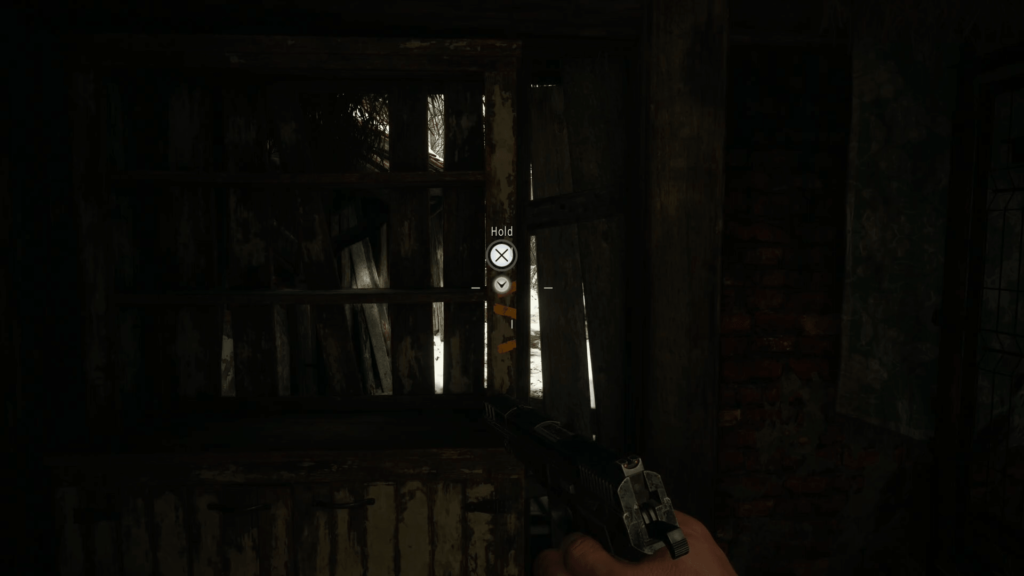 As the note described, you need to look for the hole in the stable wall. You’ve already been in the stable, but this time you can access the other side of the building now you’ve gone through the house. As you exit, turn left and head to the outhouse. Open it and you’ll find some Rusted Scrap. You can unlock the locked gate should you wish, and then go in the stables. Inside there is a moveable cabinet blocking the hole in the wall (presumably to protect against Lycans). Go ahead and move it to reveal the way ahead. Move forward, but be ready as there is a Lycan just to your right who will attack you as you move outside. Ignore the outhouse here as it has nothing inside, other than a dead body.

Tractor in your way 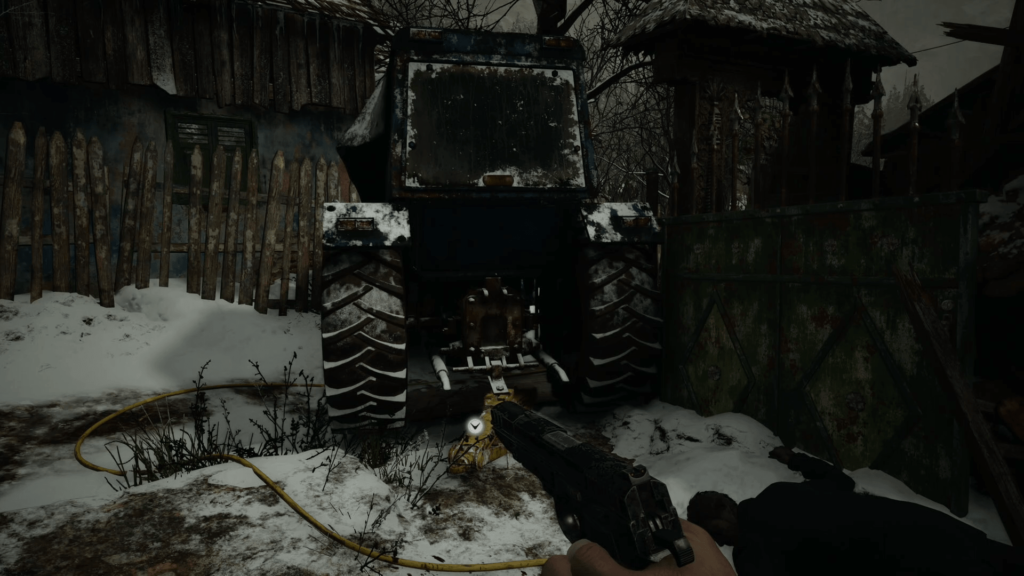 As you move forward you’ll see a tractor. Unfortunately, it is blocking the path to the right which leads to the house with the red chimney. We need an item to help move it, but we don’t have it yet. Proceed to your left, for now, to explore further. Go down the alley and you’ll see a locked gate at the end. Again use your knife on the padlock and enter. There’s a destroyable box in the courtyard with Lei in it, and when you’ve grabbed that move to the small building that was to your left as you entered the gate. Once inside, you’ll see a note that you should pick up. It appears to be a body with a light on its back. The most important thing though is to turn the note over to reveal the clue:

Look out the window. 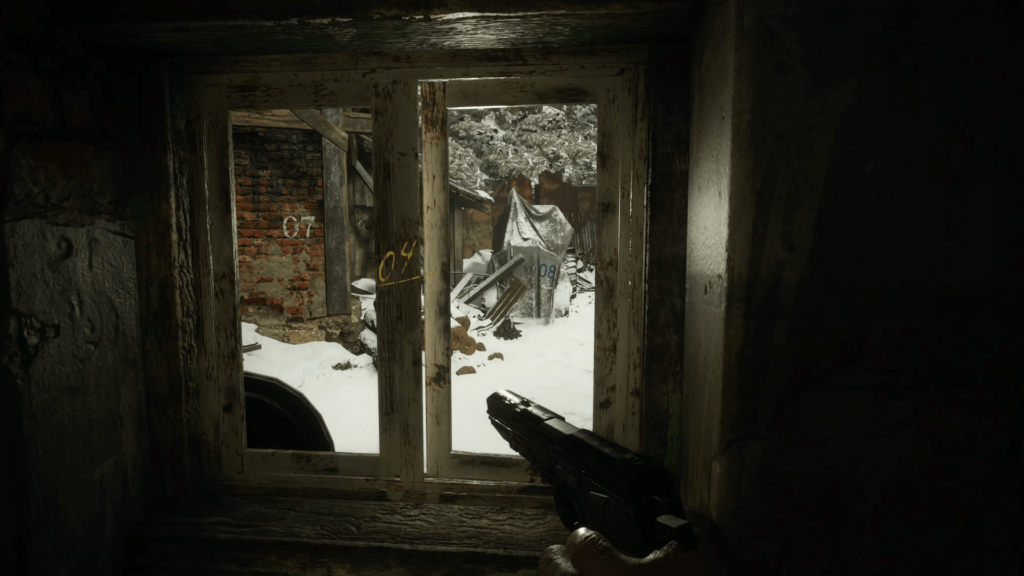 Well, we should definitely do as we are told by creepy photos right? Move to your right, and you’ll see the window in question to your right, facing the same direction as the door you came through. Dutifully look out of it…and be prepared to take down a Lycan that jumps out at you. Once they’re down you can focus on the reason for looking out the window in the first place. You’ll notice various sets of numbers both on the window itself, as well as on the wall to the left, and a tarpaulin to the right. These six digits are the passcode to the padlock in this room. Use the code 070408 on the padlock in the corner and it will open. Inside is a new handgun – the M1911, which is more powerful than your current LEMI – and crucially a Jack Handle 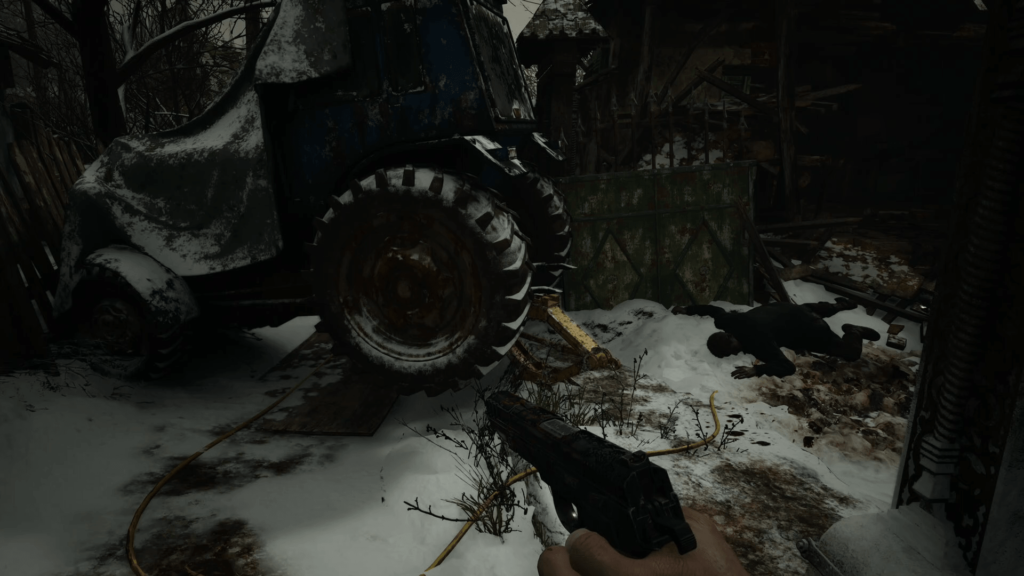 In case you hadn’t guessed, getting back to the tractor won’t just be a simple stroll down the alley. Lycans are now positioned on rooftops and will be ready to pounce at you as you move forward. It’s best to try and take out the two you can see with your Rifle to give yourself some space. Be careful though as two more will appear from the right, so take them down quickly – ideally with the shotgun for speed – to clear the threat. With that done you can move forward towards the tractor. Use your newly-found Jack Handle on the yellow Jack to begin raising the tractor off the ground. It’ll only go so far off the ground, so yep, you guessed it, we’re crawling underneath a tractor. 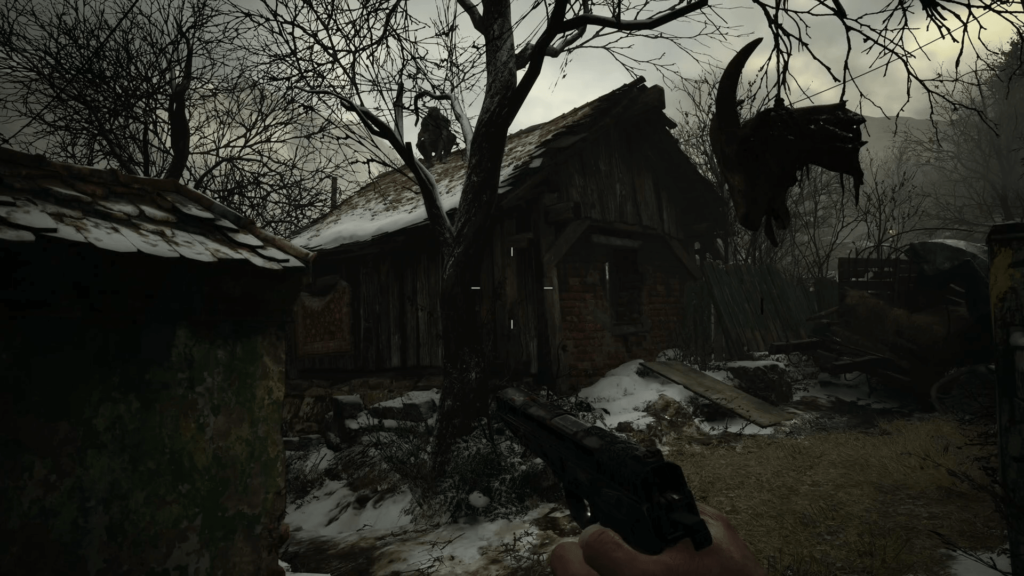 Once out from under the tractor, move forward and go right. I’d suggest at this point to heal up and reload your weapons. Also, craft anything you think you might need so that you’re prepared. Ahead is a fight with a fair few enemies, so be warned. As you move down the path, Lycans will begin attacking you, so take them out as they appear. The shotgun is great here if you have ammo for it, as it can get you out of tight spots and clear a few enemies at once if they’re close together. As always, aim for the head wherever possible. After a couple have been downed, progress round the corner. You should see a Lycan on top of a building ahead, so take him down with a well-placed Rifle headshot. This will alert the rest though, so get ready for another to come from ahead, and one from behind you too. 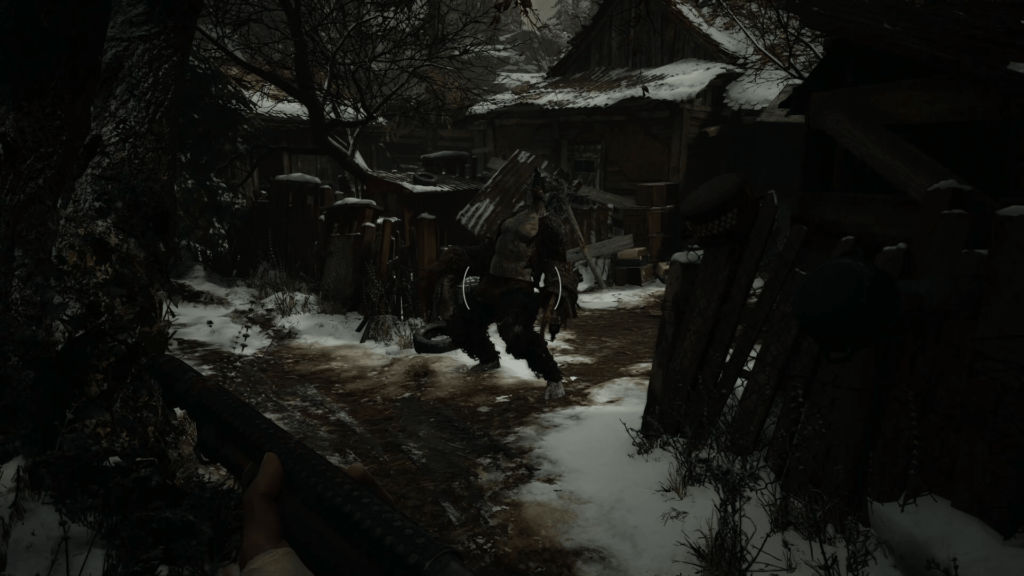 With the grunts out the way, it’s time to face the mini-boss. He is a big Lycan with armour on his arms and head. Shotgun fire will deal some decent damage to him, but at close range that does put you in danger of damage, so weigh up your options. After a few shotgun shots, his helmet will fly off revealing his head which again is the weak spot you should now aim for. Like all Lycans, a point-blank headshot should see it blast into nothing and he’ll be down. Make sure to loot his Perfect Crystal Skull. 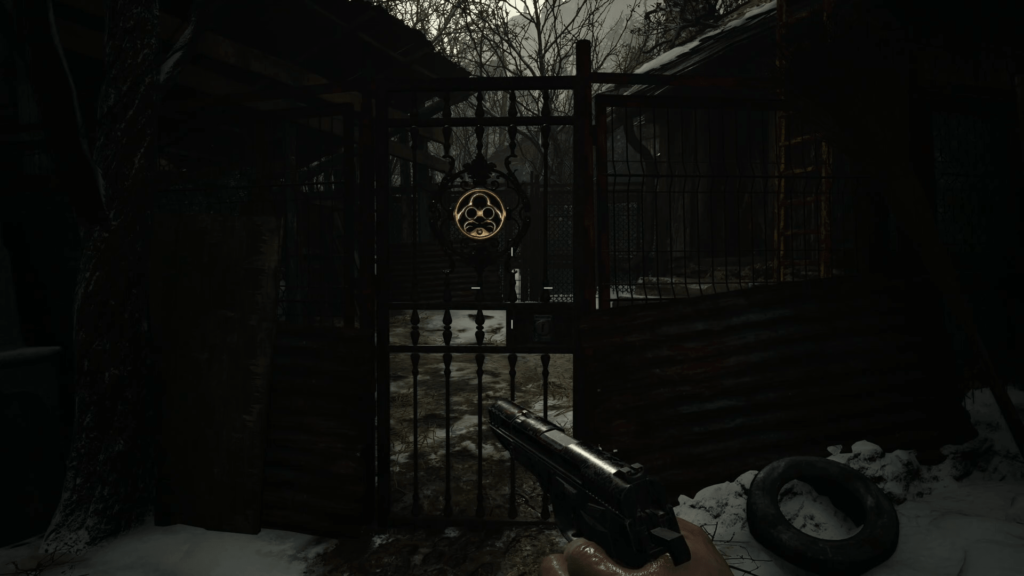 Once it is safe, move down the alleyway, and you will find a locked door on your right. It has the Iron Insignia on it, so use the Iron Insignia Key to unlock it. Inside the house in front of you is a breakable crate with some Shotgun Ammo in it, and more importantly, around the corner is the Well Wheel, which you will be using a fair bit later in your adventure. Head back outside and up the ladder. Move ahead over the planks, and pick up the Rusted Scrap in front of you. Then drop down to the ground on your left, and you’ll be outside the house with the red chimney. Climb the ladder here and you’ll be on the roof. Drop down the hole in the roof, and you’re inside. Take out the Lycan you can hear in the next room before he notices you. 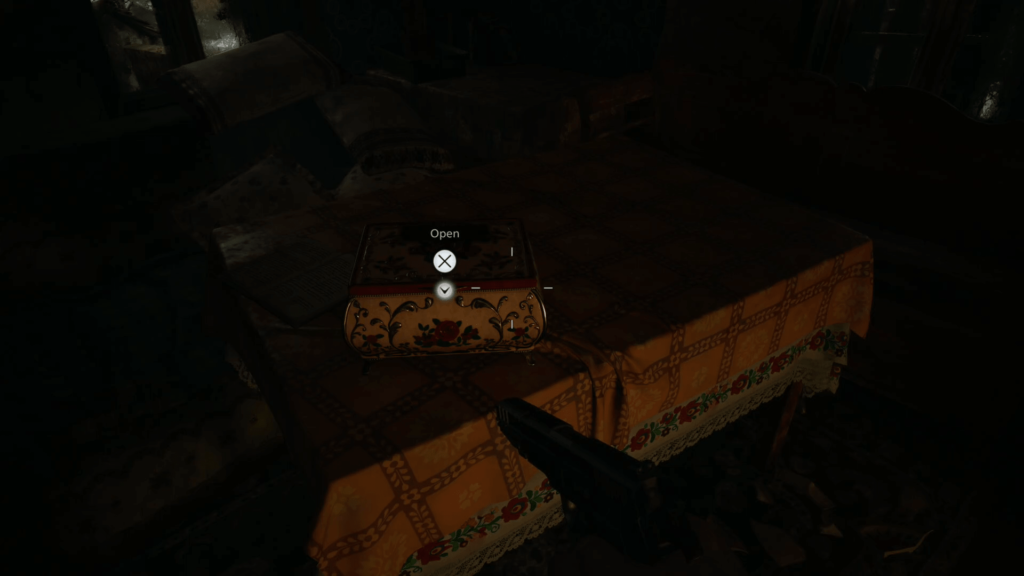 It’s taken a lot to get here, so was it worth it? Move towards the table and examine the box there. Inside you’ll find a note with some drawings and the annotation:

The Winged Key is just a single piece.

Three more parts are needed to make it whole.

You can then combine this with the Winged Key to acquire the Four-Winged Key. You’ll now need to return to the Duke to progress the story. Before you leave don’t forget to grab the Handgun Ammo from the dresser in the corner. You can unlock the front door, and once outside you can also unlock the main blue gate, to put you right near the Maiden of War statue.

Congratulations you have successfully found the house with the red chimney in Resident Evil Village.