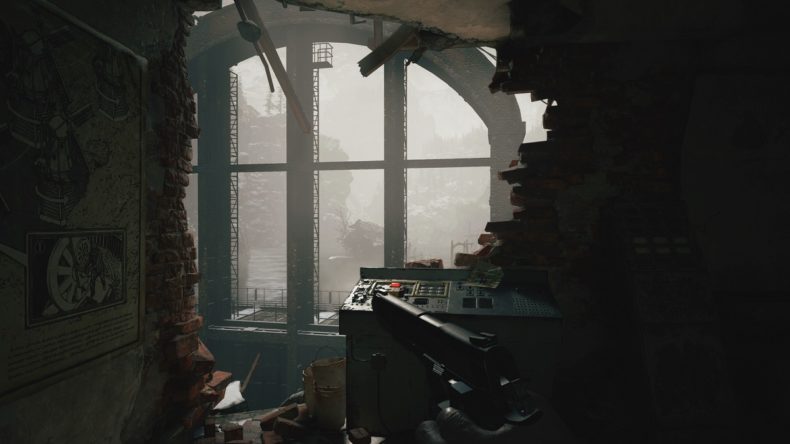 The Resident Evil Village Sluice Power puzzle is quite long. By avoiding the grotesque Moreau in the water, pulling the right levers, and powering up the mill, the puzzle can be solved quite easily. It leads to a showdown between Ethan and the Lord with a dual-personality. We’ve detailed the process below in our guide to solving the Sluice Power puzzle below.

Head to the back door

After looking at the dead power desk with the picture of the orange, blue, and white light switches, turn around. Towards the back of the house there is a corridor (next to the merchant). Heading through this door will lead you to a pathway up the hill towards the first windmill. 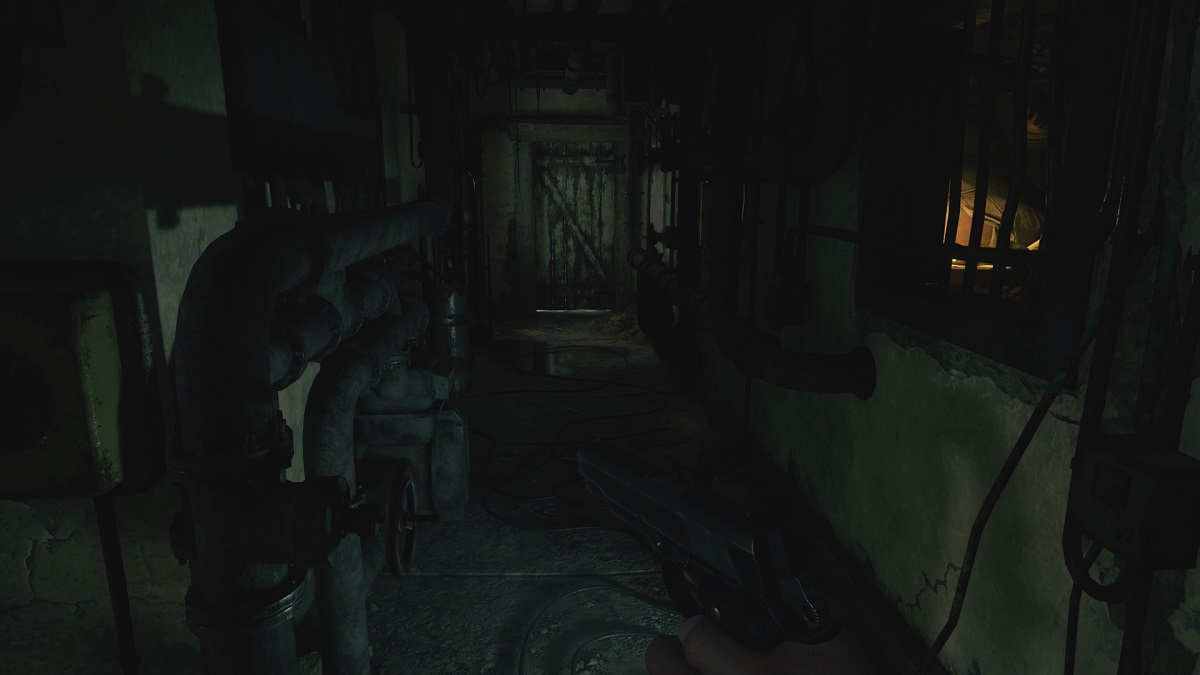 Once the first windmill has been reached, use the crank to snap it off. Enter the windmill and head down the ladder to reach an area where Moreau is swimming around. 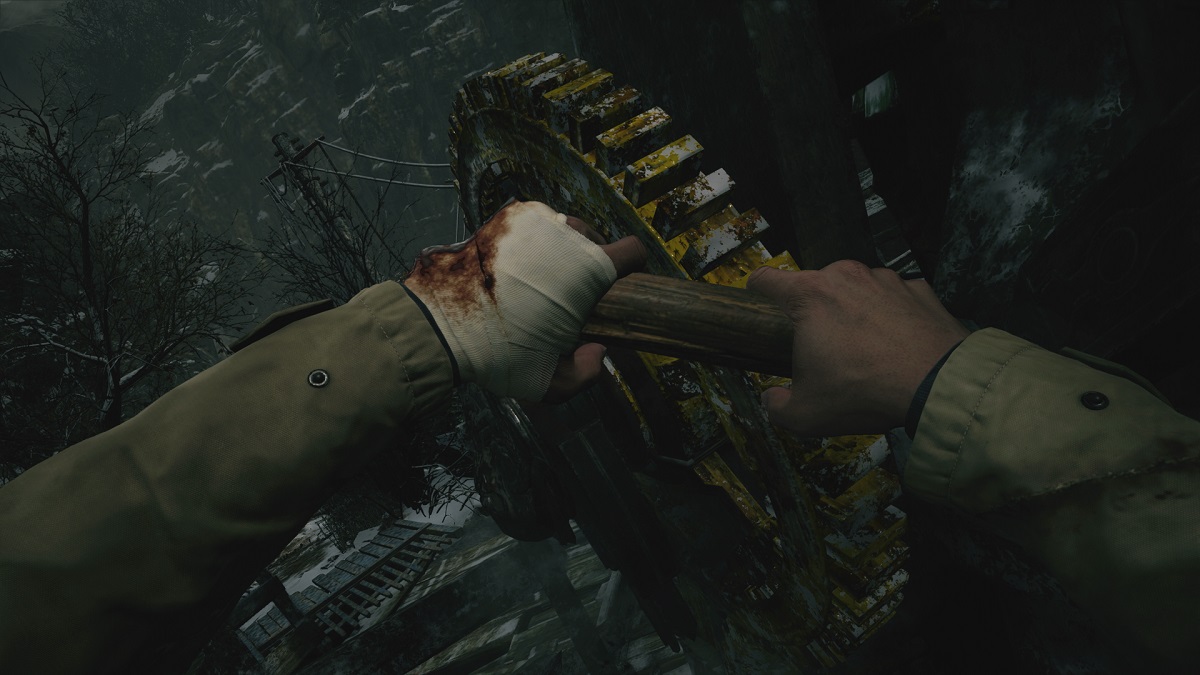 Follow the rooftops until there’s a wooden plank that can be shot. Once broken, it’ll become a platform you can walk on to continue to the next area. 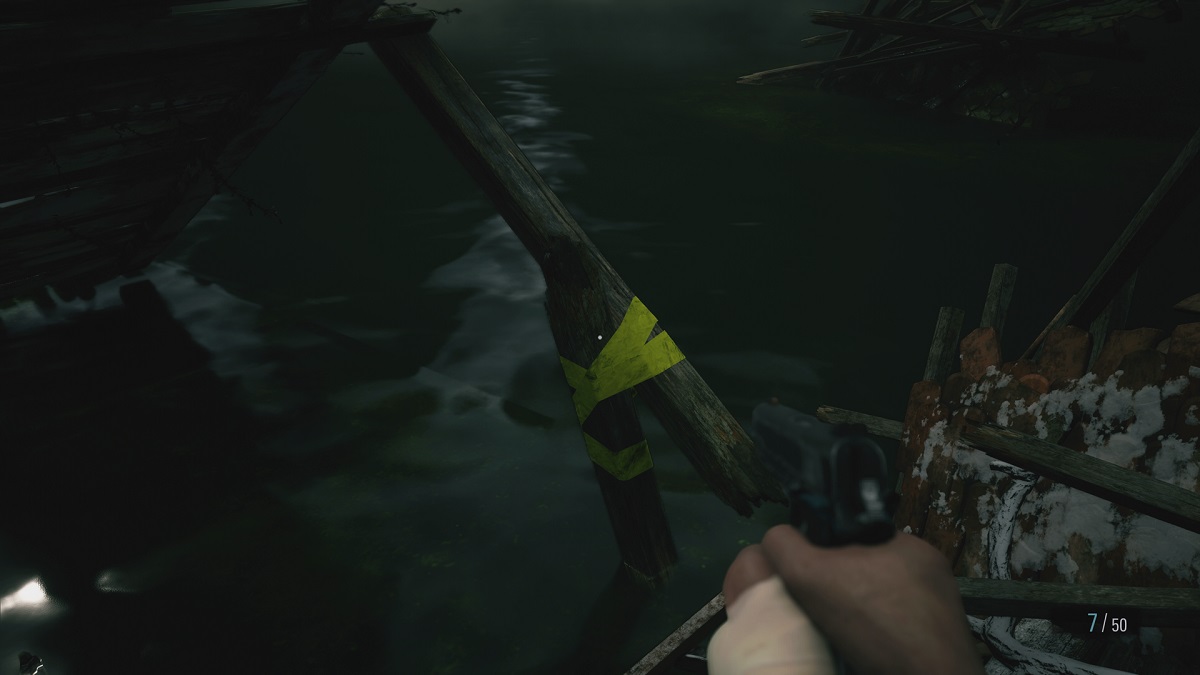 Shoot the next two planks

As you follow the path round (avoid walking over the floatable timber or else Moreau will knock Ethan into the water and eat him), there will be a platform sat in an upright position. Head to the right of it and shoot the plank with yellow tape on. 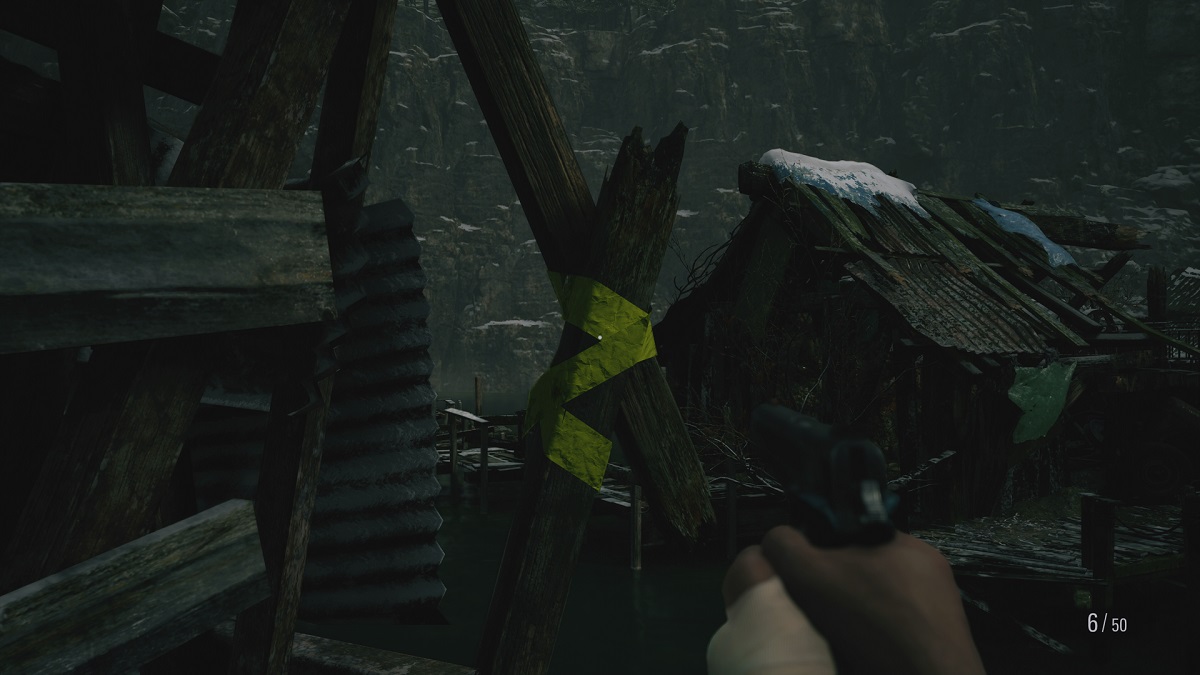 Next, head left across two floating platforms. Wait for Moreau to swim away then head to the end. Once there, look to your right and the second breakable plank will be in sight. Once shot at, the platform will now be available for Ethan to walk across. 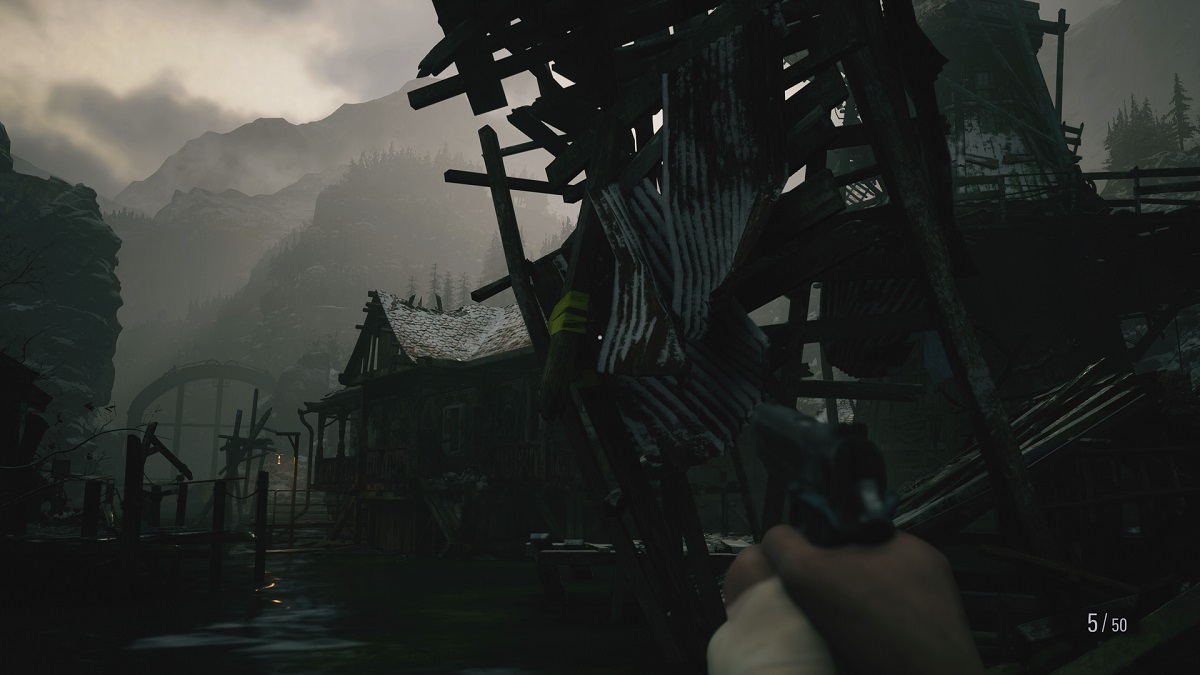 Follow the path around and into the hut with a staircase. Walk up and push the crate into the water. This will be the first crate of two that you’ll soon be able to walk across. Once pushed, turn left and jump onto the decking below. 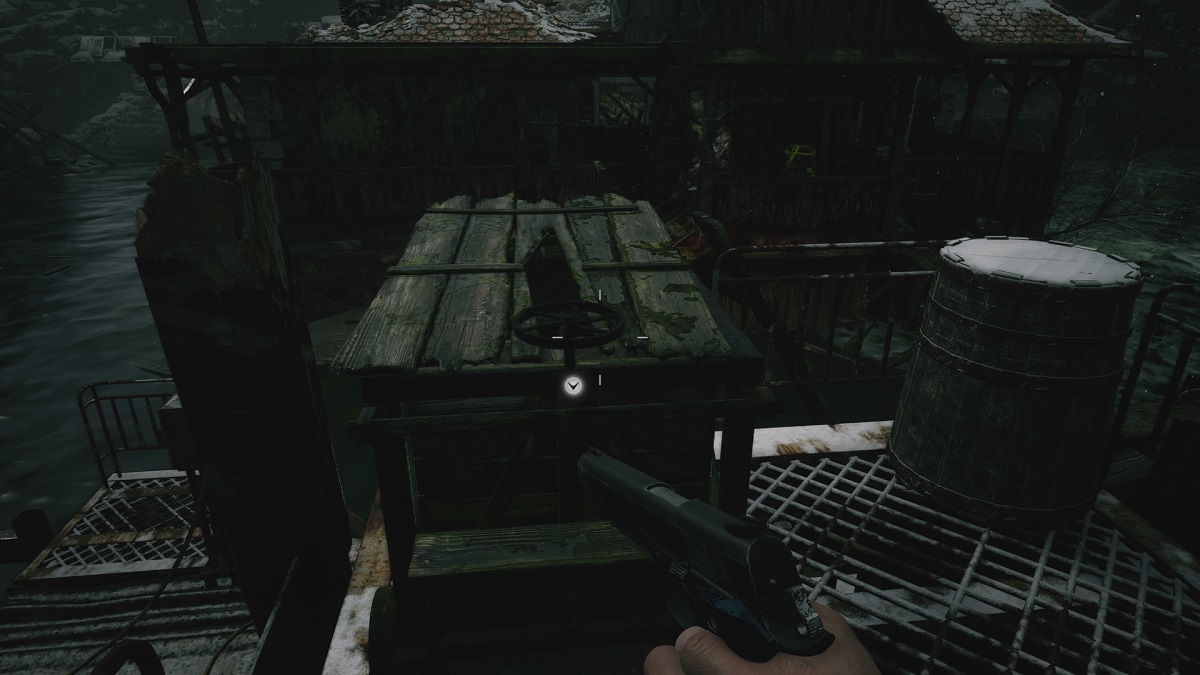 The next bit can be a bit tricky. You’ll first have to pull a lever to raise a platform behind you. It was maggot, guts, and God knows what else near it. 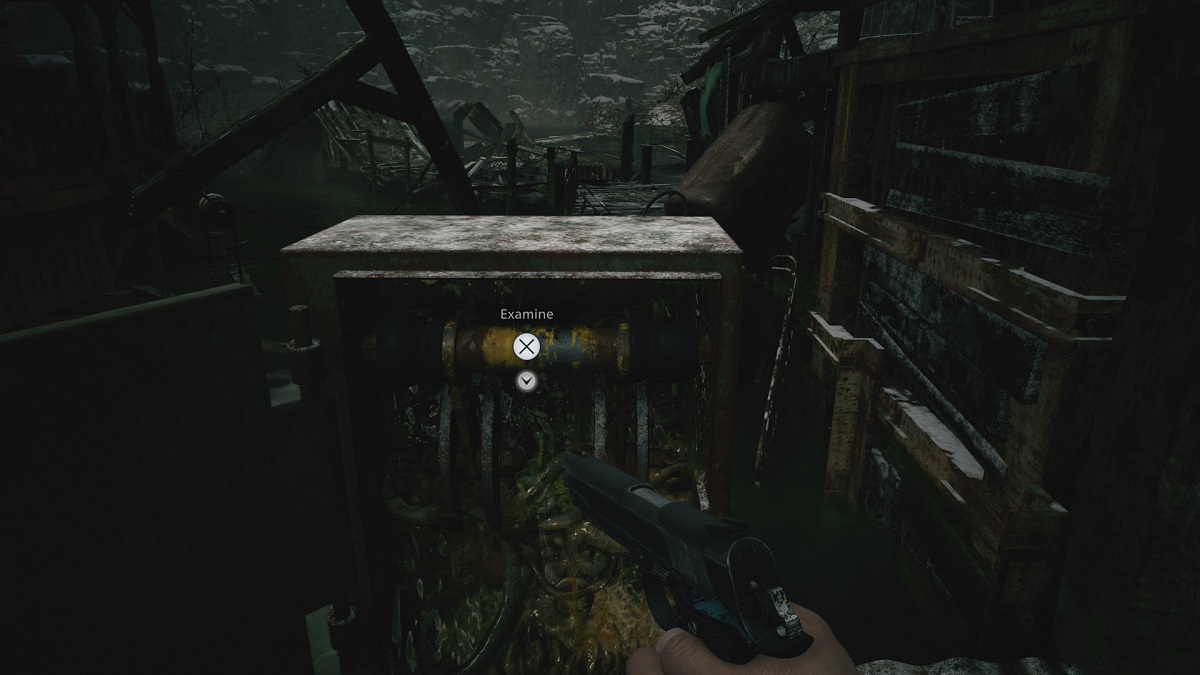 Head across the raised platform and pull the blue lever. Walk across and pull the orange lever on the visible orange platform below. All of these coloured platforms fall under the water after a bit of time has passed, so be quick. 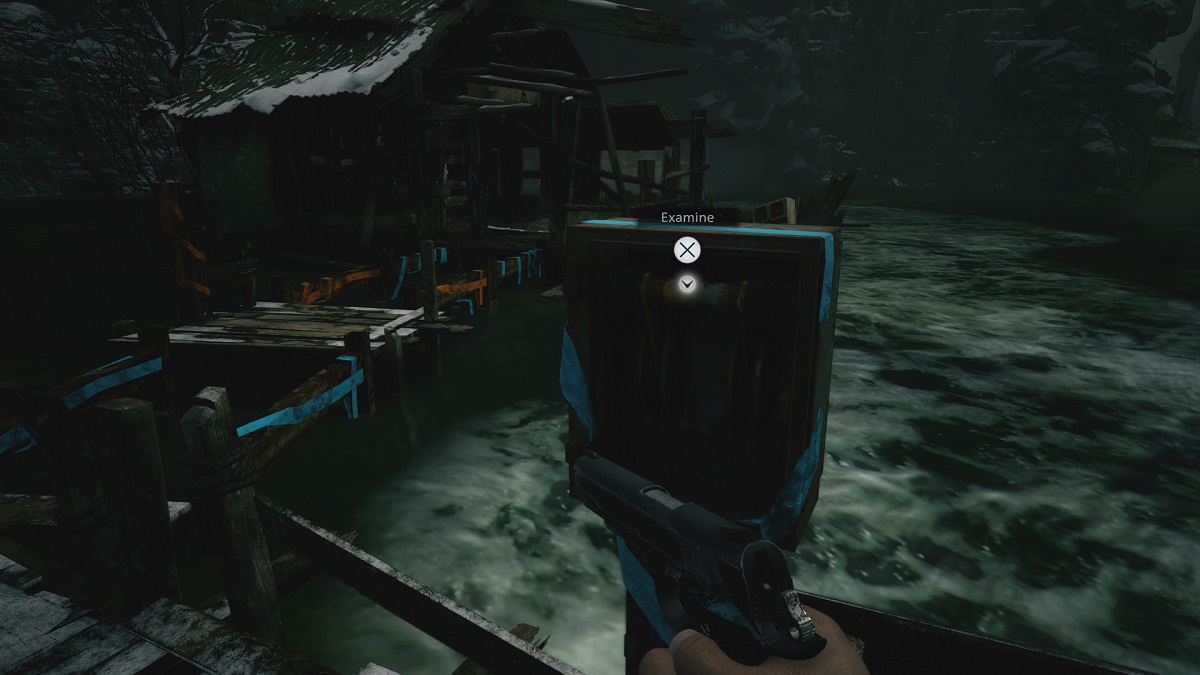 Once the blue and orange platforms have been crossed, there’s another hut with a lever with white tape on. The trick here is to pull this first, then the blue, followed by the orange which are just outside the hut. If done quickly enough, the raised platforms will take you to the next area. 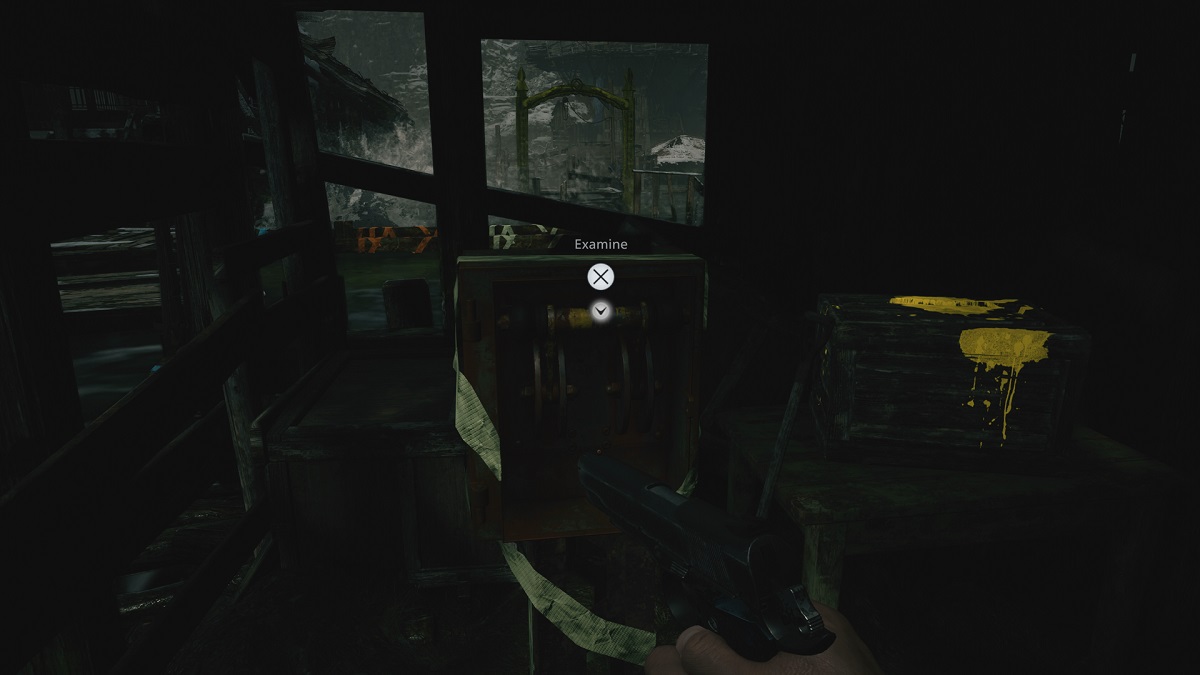 After crossing the coloured platforms, follow the path around (the one that starts with a yellow arch. Make sure you walk up the first set of steps to avoid Moreau. Once he’s swam past, head back down the few steps and continue following the path. There will be an arbitrary crate to push so you can walk into the hut. Head into the hut with a staircase leading up to the second crate. Push it in the water and jump down to walk across it. 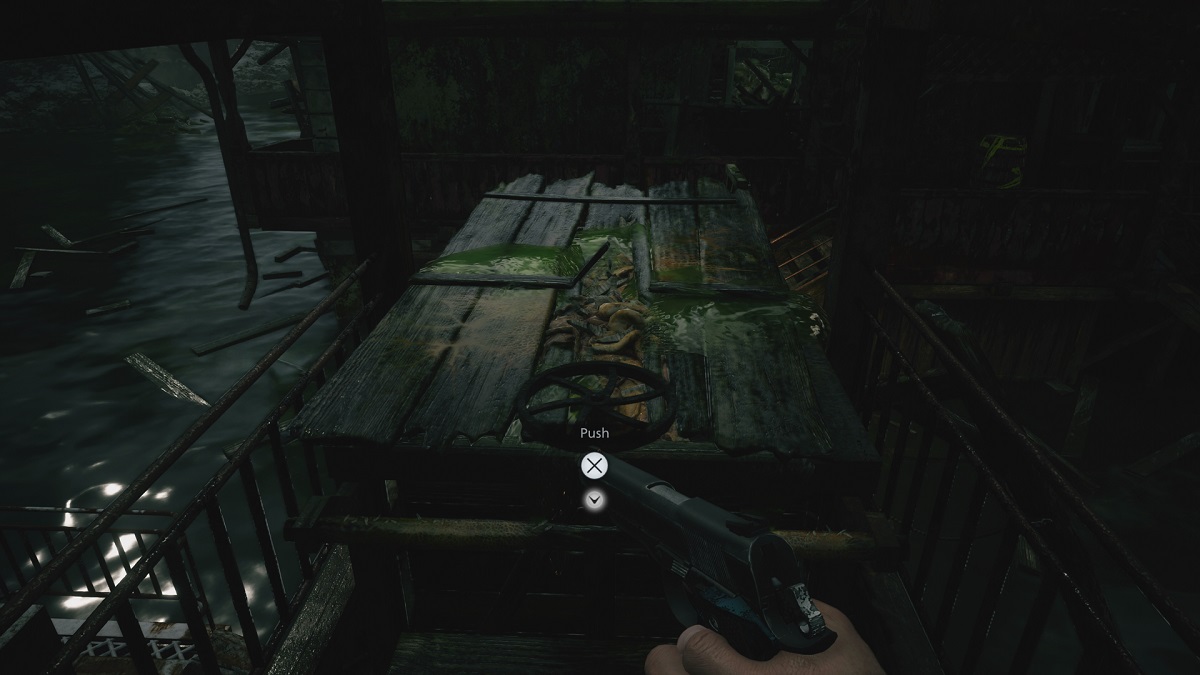 Blast the slime and raise the boat

Crossing the two crates leads into a hut with some slime blocking the path. Blast it with whatever you have until it breaks, then pull the leaver up the ladder to the back of the hut. 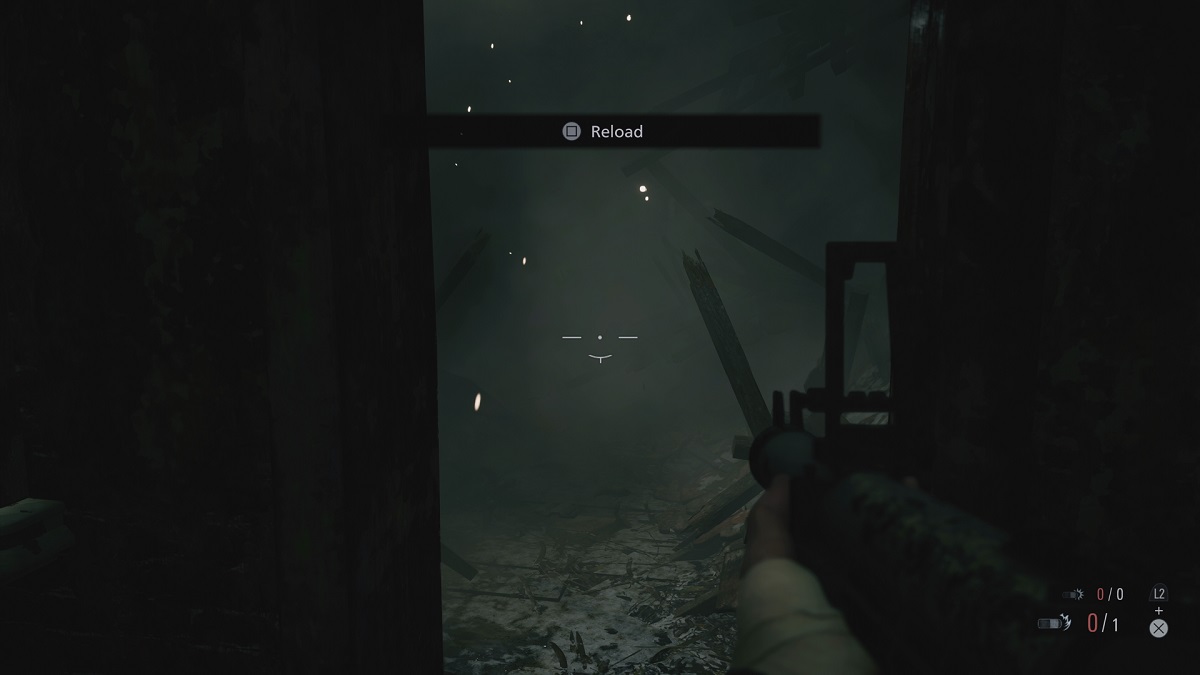 This will raise the boat from the water. Walk across the boat and head into the house as pictured below. 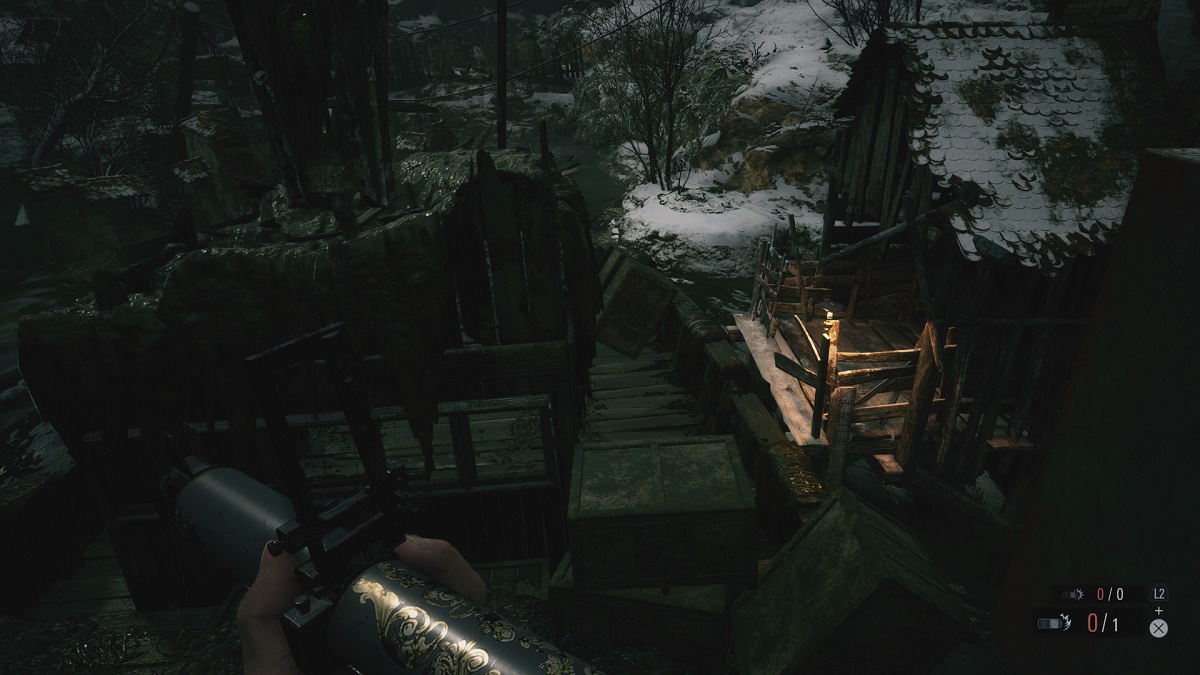 Head into the second windmill

Blast the second load of slime in the hut and head into the second windmill in front of it. 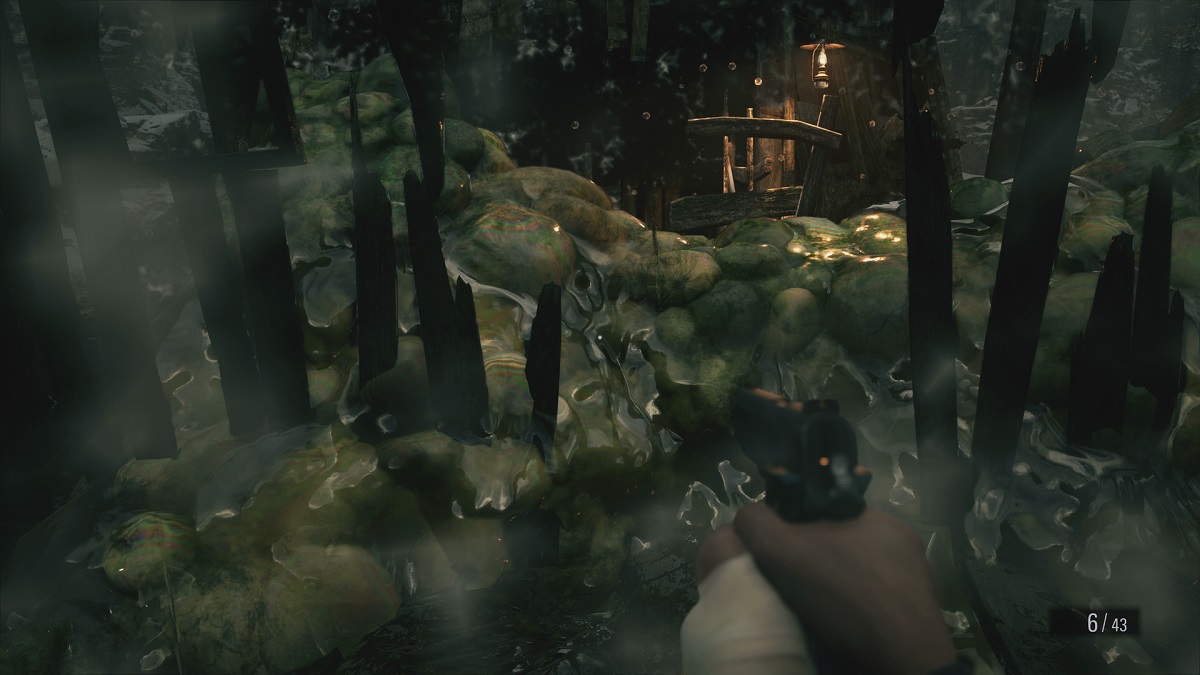 To raise the ladder that leads to the top of the windmill, shoot the padlock attached to it. This will lower the ladder, allowing you to climb up it. 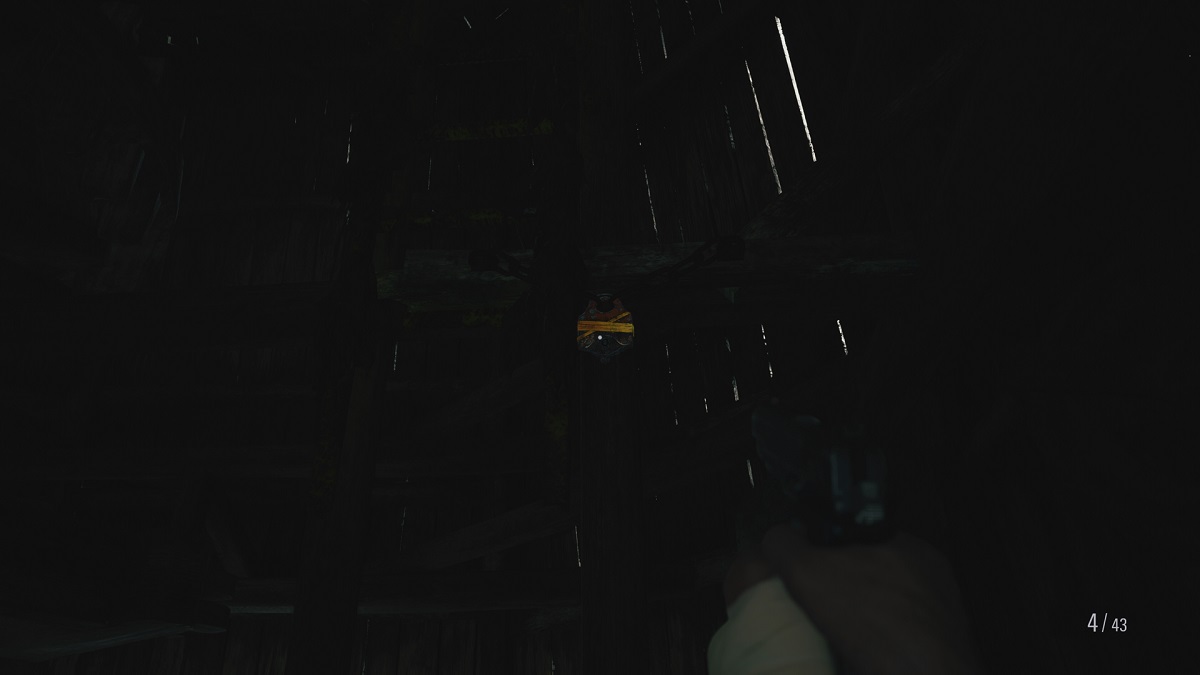 At the top of the windmill, grab the crank. Once obtained, click where you’ve just taken it from to use the moving platform. 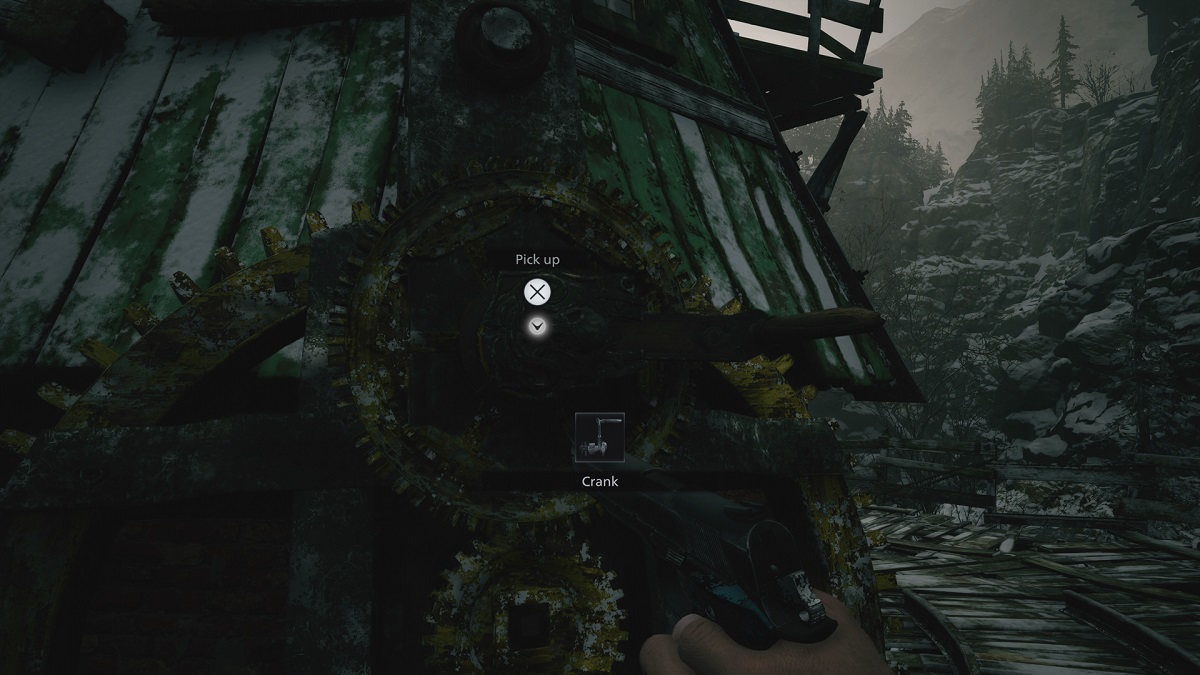 This will bring down a ladder for you to climb up to the top of the windmill. 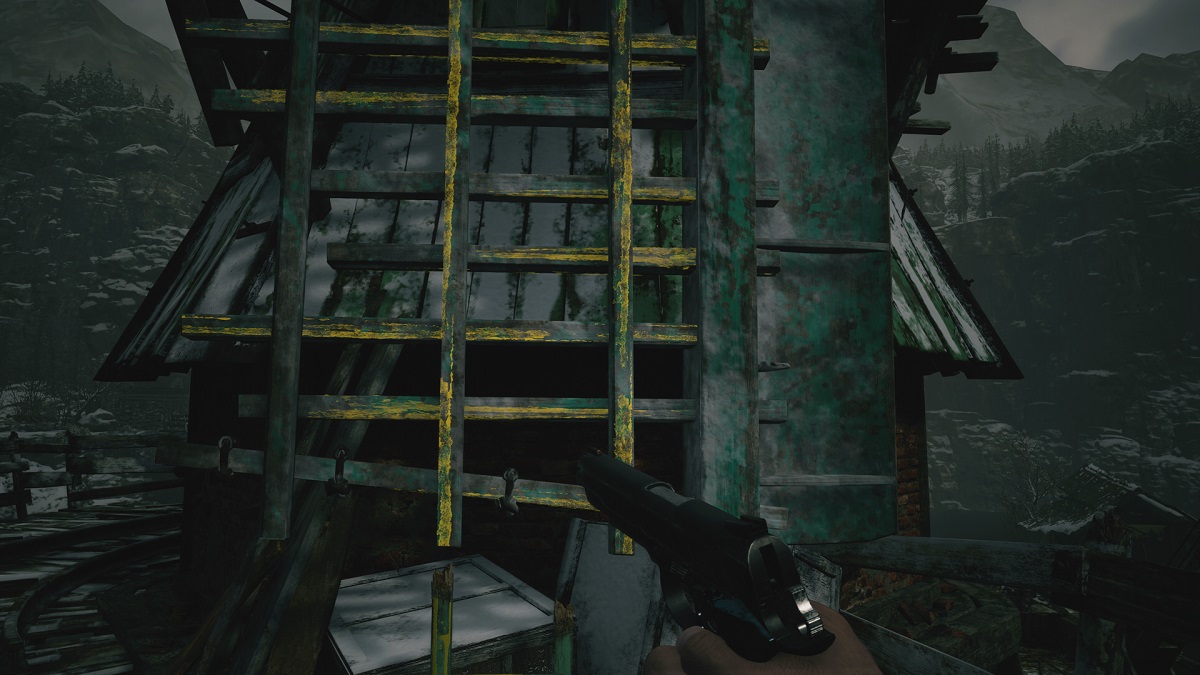 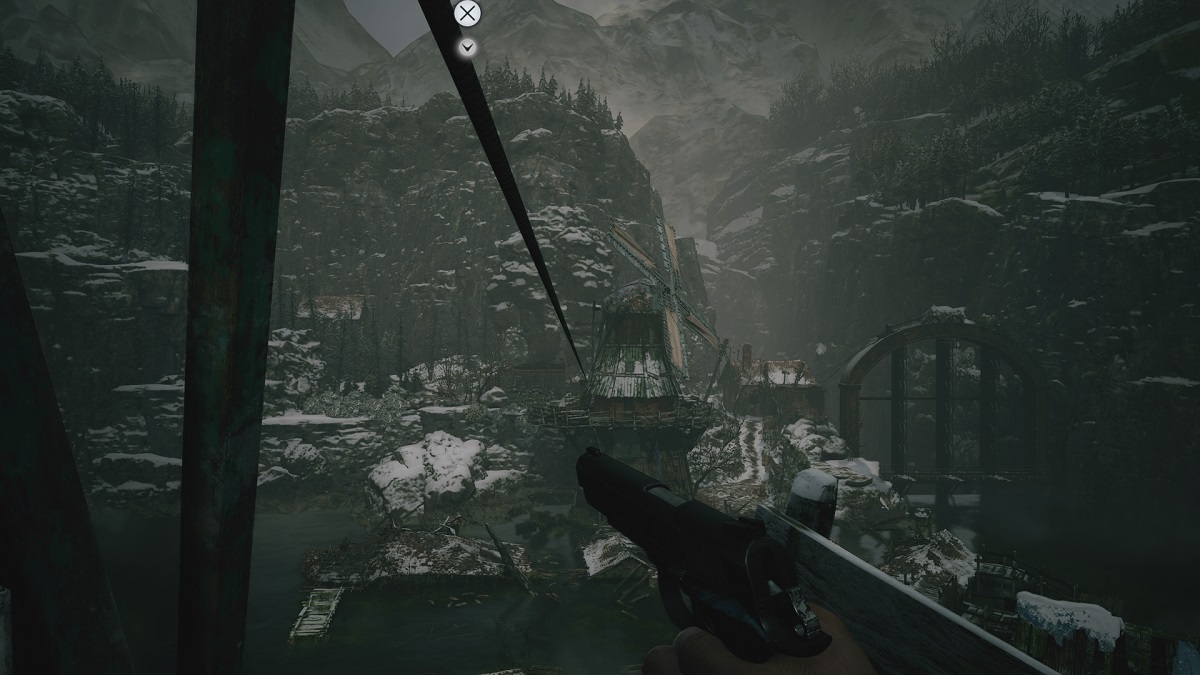 With everything now powered up, follow the pattern as detailed below. If you were to turn the picture anti-clockwise once, that will give you the answer. Click the buttons until the corresponding colours match. 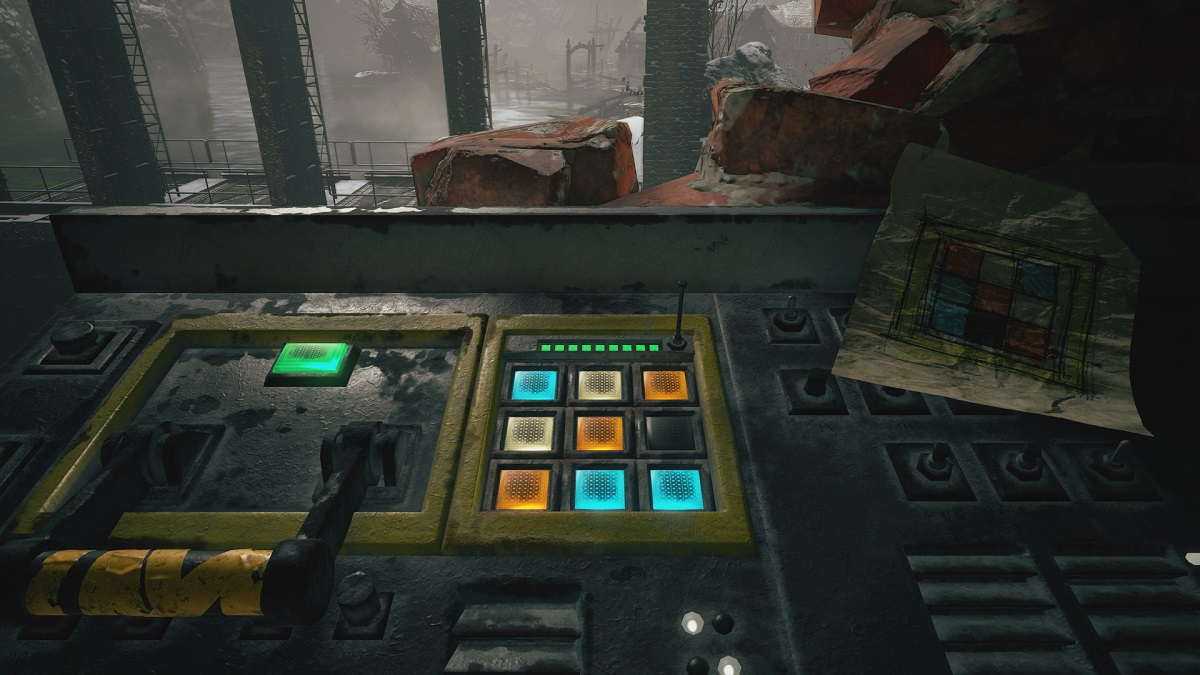 Once done, pull the lever and the sluice will open up. 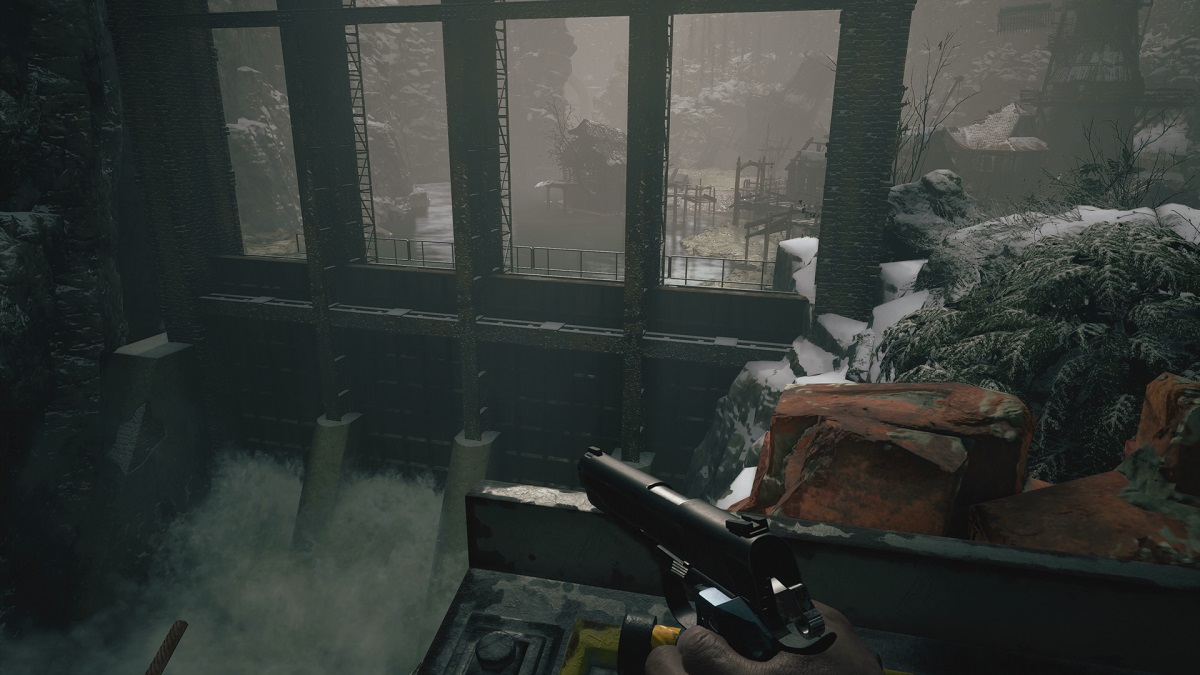 Head back to where Moreau was swimming about

Go back through the back door and head up the hill. The water has now gone down and you can now jump down to the ground below. The Resident Evil Village Sluice Power puzzle is completed, and it’s now time to face the third Lord. Good luck! 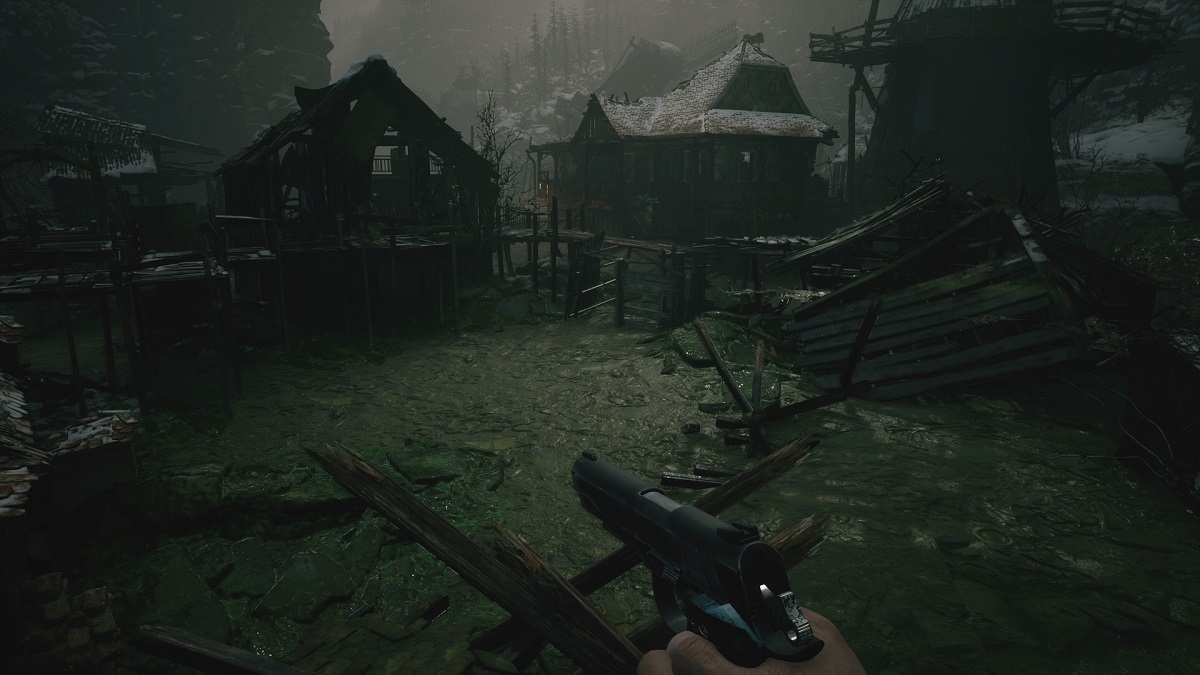 Video games are cool. Don't let anybody tell you any different.
MORE LIKE THIS
CapcomGuideresident evil village