previous
Jurassic World Evolution 2 is a more involved and exciting experience | Hands-on preview
random
next
New Warioware: Get it Together trailer and free demo
0 comments

Saints Row is being rebooted, and we’ve seen it in action | Hands-off preview 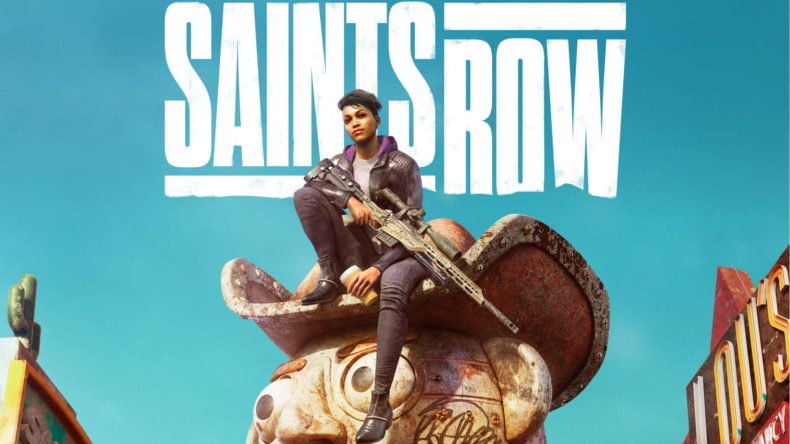 How do you follow up something like Saints Row IV? Being pretty brutal about it, Volition’s 2017 release Agents of Mayhem suggested that the studio itself wasn’t entirely sure, either. It wasn’t a new Saints Row game, but it also sort of was. What it wasn’t, was as good as Saints Row IV. It also wasn’t Saints Row V. But that’s because that game doesn’t exist. Oh, by the way, I’ve seen the new Saints Row and it’s a reboot. Also, the new Saints Row looks brilliant.

When a reveal starts with a spaghetti Western remix of the Saints Row theme you know something is about to go down. Of course there’s still a thumping bass permeating throughout the track, but finger picked classical guitar and, look, the soundtrack already seems killer, okay?

There are mobile phones so it’s not ancient. The humour is there right away, the characters are larger than life. Then there’s a digital mask that reminds me of Watch Dogs 2. A rocket launcher appears. Guns are fired. This is a good CGI reveal trailer. The music is banging, a motorbike flies over the top of a stolen car. Somehow the car is now on the roof of a building. 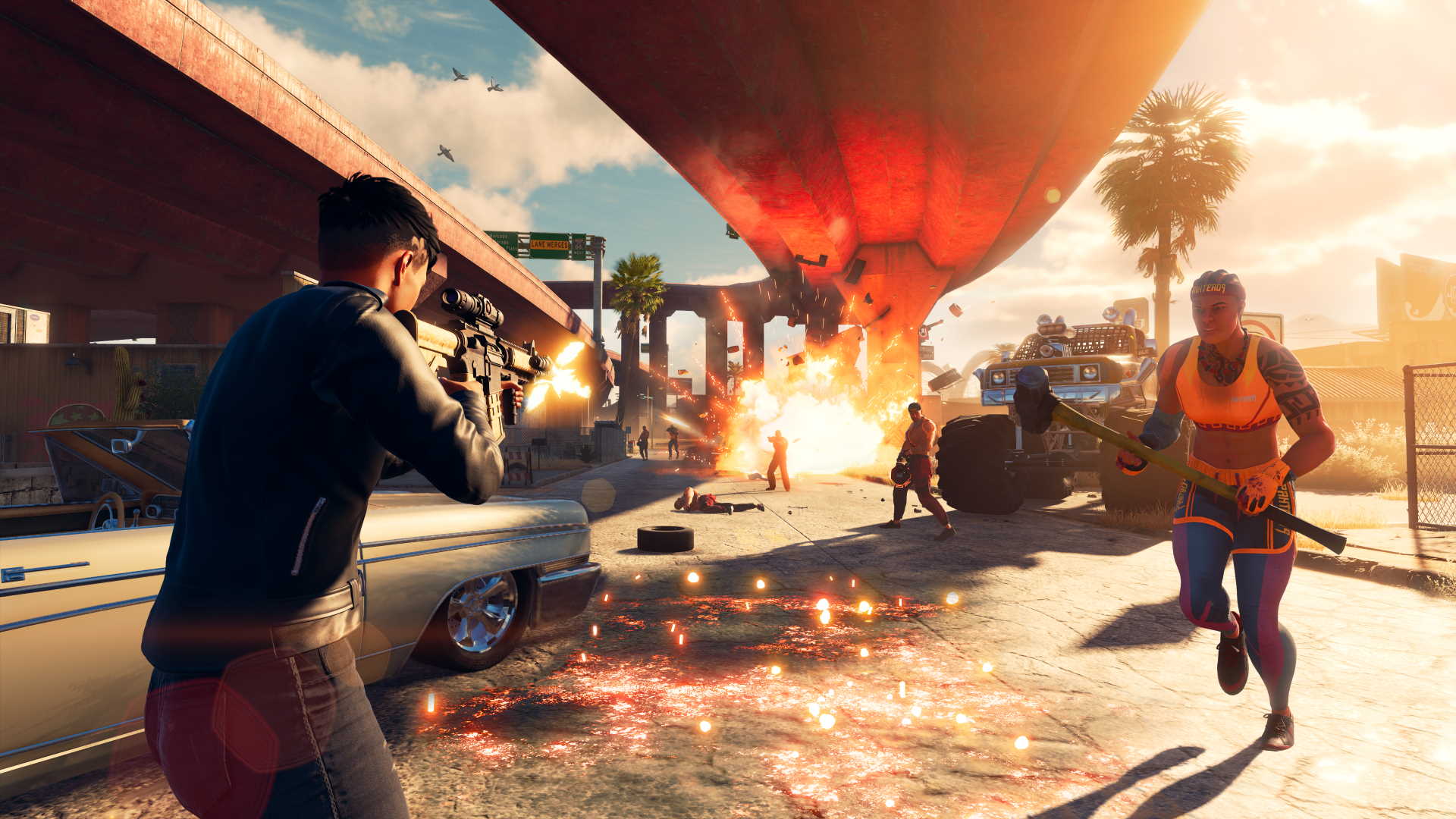 The angry over-sized beardy man is angrier than ever. But a huge neon mustachioed sign lands on his car. Oh no, the getaway car won’t start now. Angry beard guy aims the launcher, but it’s okay ‘cos now he’s dead. It’s been far, far, too long. It’s out on February 25, 2022. It’s called Saints Row. It’s just called Saints Row. Why? Because it’s a reboot, that’s why.

So over to the studio now, and Volition themselves start by saying “you may be wondering what we’ve been doing since Saints Row IV?” and, well yeah. This is a reboot, a chance to go back to the origins. It’s got a contemporary crime angle, and it’s a story they want to tell. The gameplay I got to see was pre-alpha but it looked good: fluid and responsive. 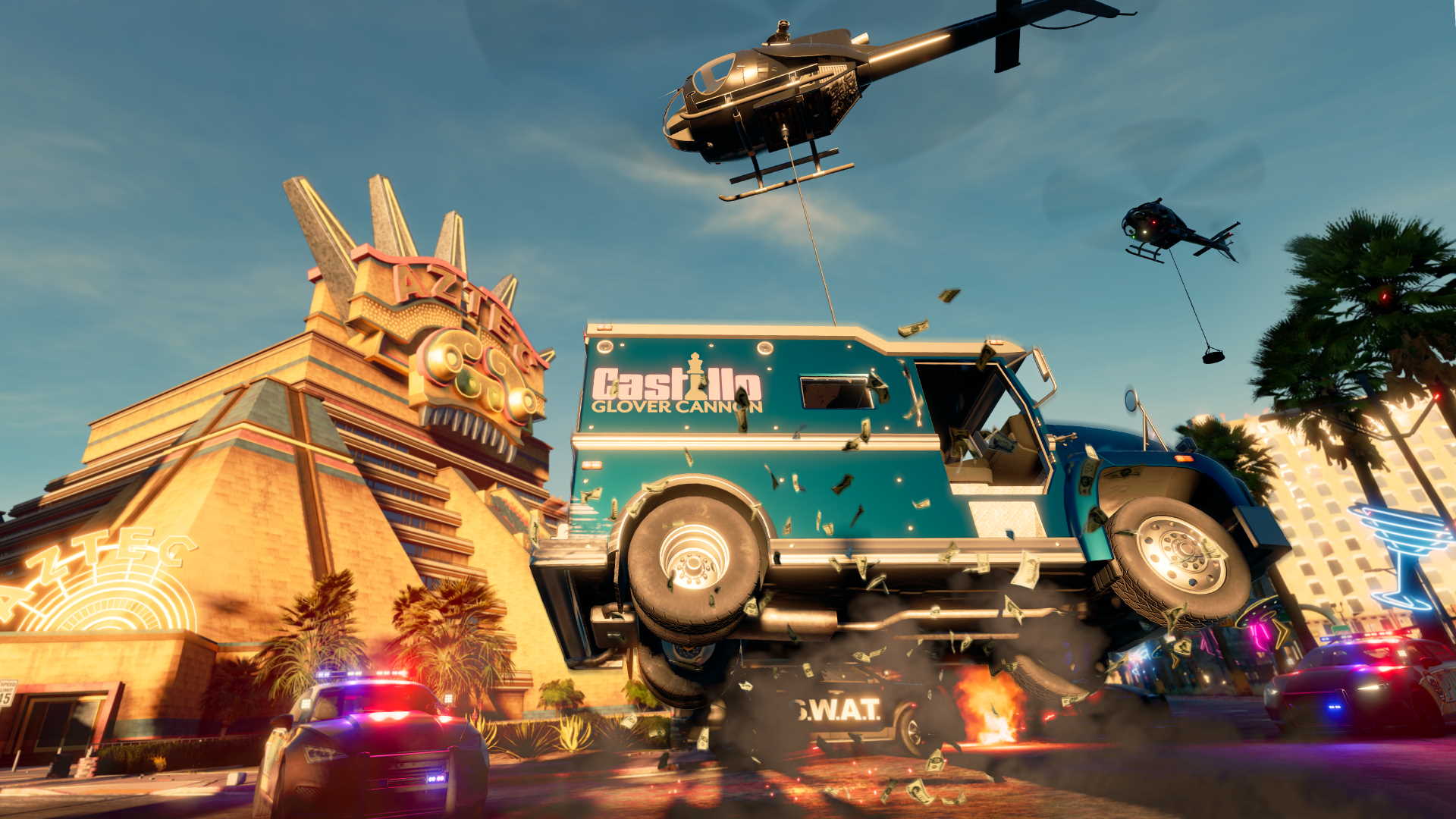 It’s about four friends who are fighting back against the world and creating their own criminal empire. The game is set in Santo Ileso, and it’s inspired by the American SouthWest. Volition says it’s one of the biggest maps that’s been in a Saints Row game, with nine unique districts. Each of these has its own feel, the developer explains. There’s loads of verticality for jumping and wing-suiting, and the locations run the gamut from the rich-living to the neon underbelly.

It doesn’t seem as though super-powers will be returning, as this does seem a back to basics approach to the series. That said, I saw a helicopter picking up a car and flying around with it. There was a lot of driving, including motorbikes. 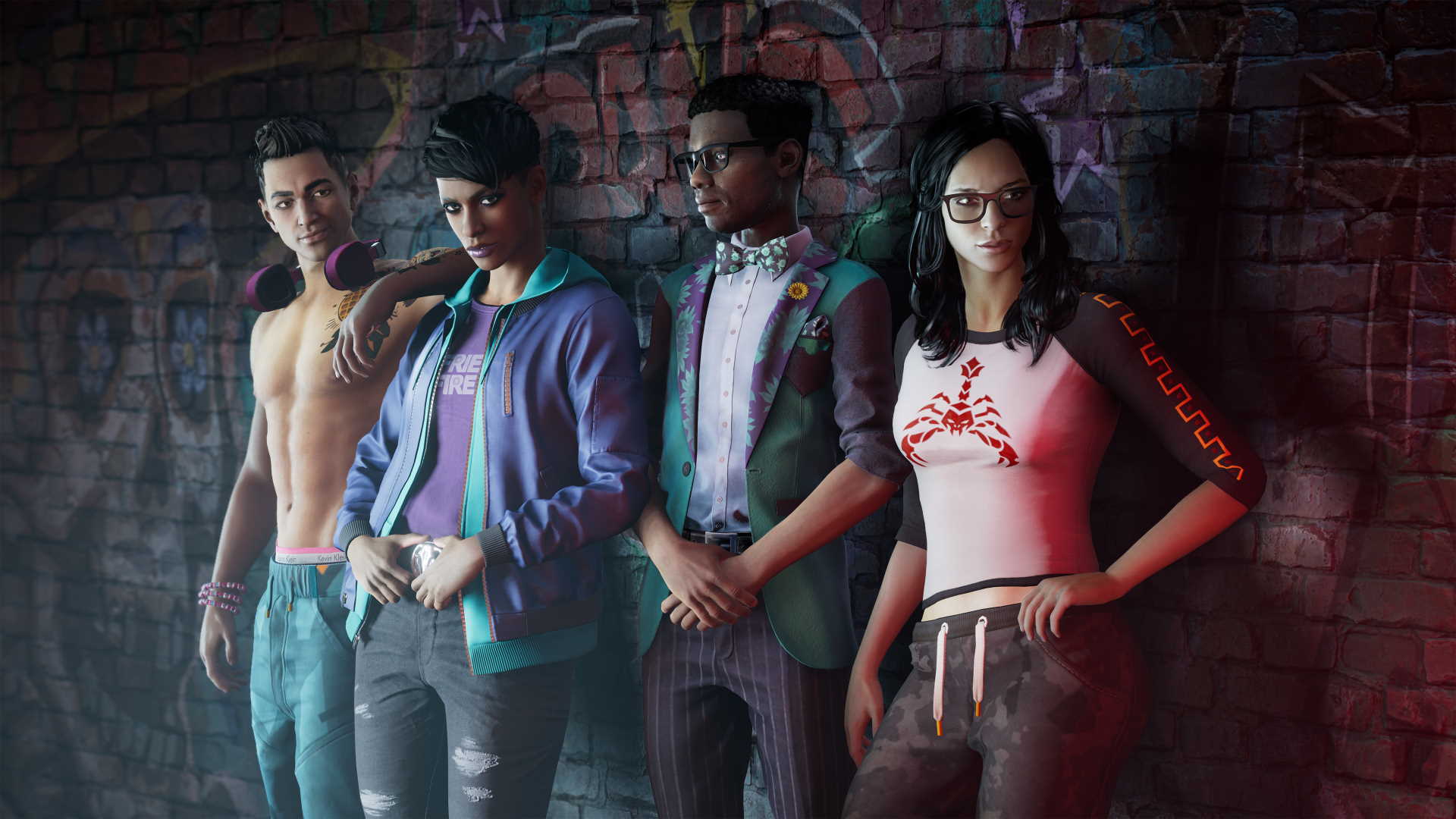 The four main characters make it feel like a heist movie, too. There’s the planner; the driver; then there’s Kevin the DJ and thrill-seeker, and lastly you’ve got “The Boss”, who is basically a murder-machine. Oh also, you play the boss, and you can create your own character.

There’s three brand new distinct gangs to go up against that will try to stop you from taking over the area. Los Panteros are melee based, mostly, and extremely aggressive. Marshall Defense Industries is the high-end tech gang, who can even use weapons that can stop you in your tracks. These are the money-based ones. The Idols round out the three, they’re all about fame and fortune and they say they’re anarchists. 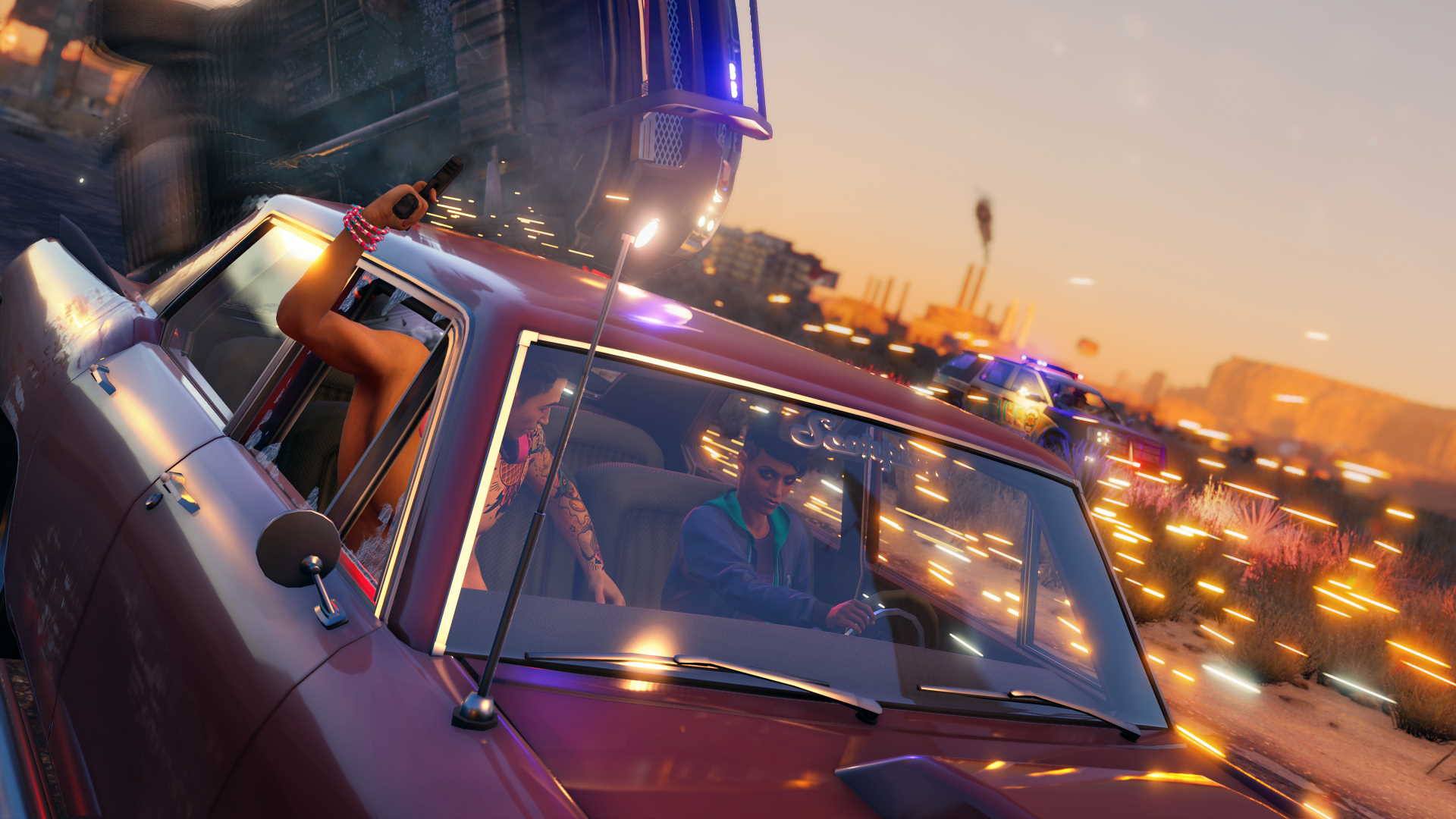 The hook there is that other than Eli (the planner), the other three members of your gang are part of these factions, but want to start their own thing and make it to the top. As you play you can decide which criminal fronts you run from locations you take over. Easter eggs are in there, says Volition, but this is a “new” game, so perhaps don’t go in expecting returning characters.

When can I play Saints Row reboot, and on what systems?

Saints Row is fully playable in two-player co-op with something the developer is calling “pranking” that’s new to the series. There’s loads of customisation in terms of how you can look, and it’s going to come to the latest consoles (Xbox Series X, PS5), but also on the last generation as well. It’s also cross-gen so you can play with friends no matter if you haven’t upgraded yet. Volition says it’s a “full reboot”, and will let players see the beginning of the Saints.