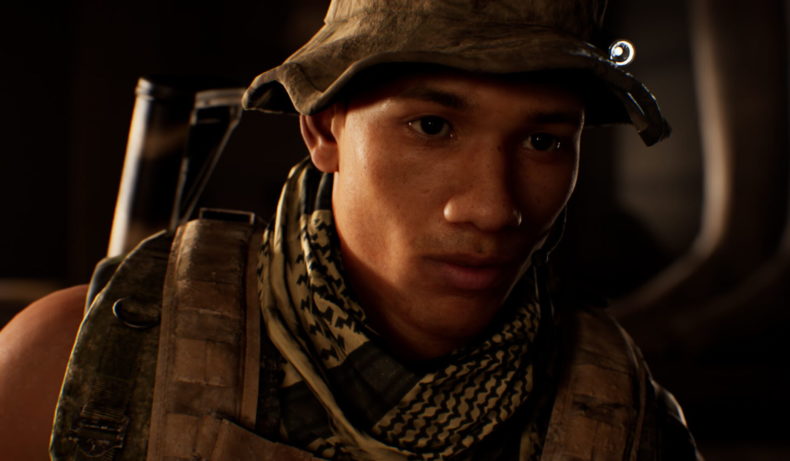 Despite two competent entries so far in The Dark Pictures Anthology, fans of Supermassive Games’ branching narrative horror titles still hark back to their first foray into the genre, Until Dawn. Both Man of Medan and Little Hope tried to put fresh spins on that classic, almost seminal “teens in the woods” outing from back in 2015, with varying love from fans, despite being accomplished games in their own right. It’s pleasing then, that despite its very different design choices, House of Ashes – the latest in The Dark Pictures Anthology – evoked some strong memories of Until Dawn. Could this be third time lucky for those wanting a spiritual sequel?

The preview build of House of Ashes that I played showcased about an hour’s worth of the game, starting right after the prologue. A group of fighters in the Iraq War – four Americans and an Iraqi – get trapped underground after the floor collapses beneath them. Separated from each other, and not altogether friendly with each other, particularly in the case of the Iraqi soldier, they form our group of five protagonists for the story.

But if that was it, it wouldn’t really be a true The Dark Pictures game, and clearly, there’s more to this underground area our group find themselves in than is initially obvious. For starters, they appear to have unearthed some sort of underground Sumerian temple structures, giving the location an eerie sense of foreboding. This is further amplified by the lack of light, because, well, you’re underground. And that’s not all, because it’s also pretty clear you’re not alone down there. Nimble creatures are lurking in the shadows, and before long it’s clear they’re not cautious, they’re hunting our heroes. Escape is no longer a preference, it’s a necessity for survival.

It certainly feels more high stakes and adrenaline-fuelled than previous outings, and that’s clearly deliberate. Certain changes have been made to acknowledge and amplify this different experience. Gone are the fixed camera angles of previous titles, and instead replaced with an over-the-shoulder view. Moving from a Resi 1 control method to a Resi 4 one if you will. Armed with guns, due to them being soldiers further enhances the feeling of this being more action-oriented, and there’s certainly a difference between controlling vulnerable characters in previous titles, and now moving around as well-drilled soldiers with weaponry to boot.

But don’t think this has suddenly become a third-person shooter. Your gun use is limited to QTEs – a hallmark of the games that can impact the narrative. And in most cases, you can still choose not to use them if you wish. But like most decisions, there are consequences here too. The clever use of light also helps add to the tension. You control the light from your gun or helmet as you move around, so you not only control where you go, but what you see. And that makes these cavernous halls feel more claustrophobic and make you still feel uneasy and vulnerable, despite your athletic prowess.

But so far it all sounds very different from Until Dawn, right? So what am I on about with claims of similarities? Well, one of the biggest nods I found was in the enemies that you discover in the caves themselves. Whilst nothing concrete is revealed about them in the first hour, the vibe they give off is very similar to the enemies you find yourself up against in Until Dawn. I won’t spoil specifics, in case people haven’t played that game, but fans of that title will know the type of enemy I am referring to. It’s a very real, dangerous enemy that causes fear just with its presence.

The other interesting similarity I found was in the characters themselves, and more specifically, their existing relationships. Until Dawn played heavily on laying out and playing on character relationships of the past and how they impact current-day decisions. House of Ashes seems keen to do the same, with there being clear pasts to these characters that will likely impact how they interact with each other as the story progresses. Man of Medan and Little Hope didn’t really do that as much, and in some cases, characters were meeting each other for the first time at the start of the story. House of Ashes appears to prioritise more depth and history to the characters and their past.

It remains to be seen how much these similarities to Until Dawn stick with House of Ashes. It will also be interesting to see how well the new design choices fit into the established formula and whether they improve the overall experience or not. One thing is for certain though, House of Ashes feels like it’s doing all the right things to keep things fresh and new whilst also keeping the Dark Pictures vibe intact. It feels like an entry fans will love, but could also finally convert those still wishing for Until Dawn 2.

House of Ashes is due out on PlayStation, Xbox, and PC later this year.

5 things we learned from the House of Ashes trailer