previous
House of Ashes | All Picture locations
random
next
Podcast 465: Guardians of the Galaxy, New World, House of Ashes
0 comments 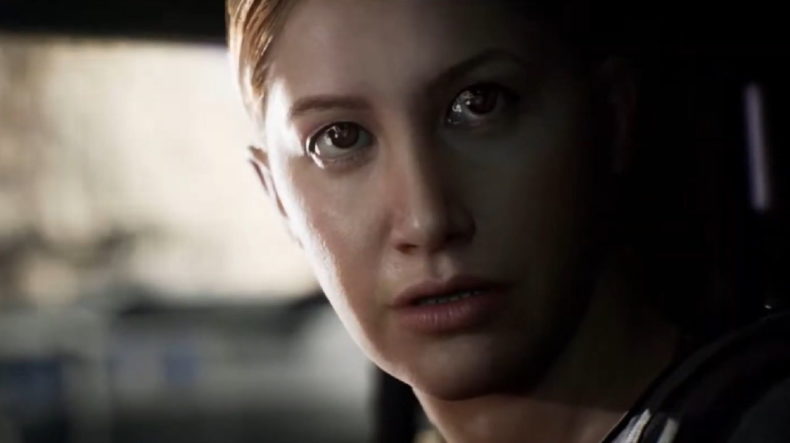 House of Ashes is the third installment in Supermassive Games’ The Dark Pictures Anthology series Like previous games in the series, you’ll likely want to focus on trying to keep everyone alive through to the end of the story. But given all the decisions and story beats that unfold, that can be quite a challenge. So we’ve pulled together all you need to know to make it out of House of Ashes with all characters alive and well.

Please do not read on unless you have finished House of Ashes at least once or are not bothered about plot or key events being spoiled. In order to provide the information required to keep everyone alive, we’ll need to go into certain details that spoil the story. You have been warned.

Note: This is just one set of solutions to keep everyone alive. There are other combinations that work that will also keep them alive.

CHECK THIS OUT: House of Ashes | Where to find all the secrets

House of Ashes | Keep everyone alive with QTEs 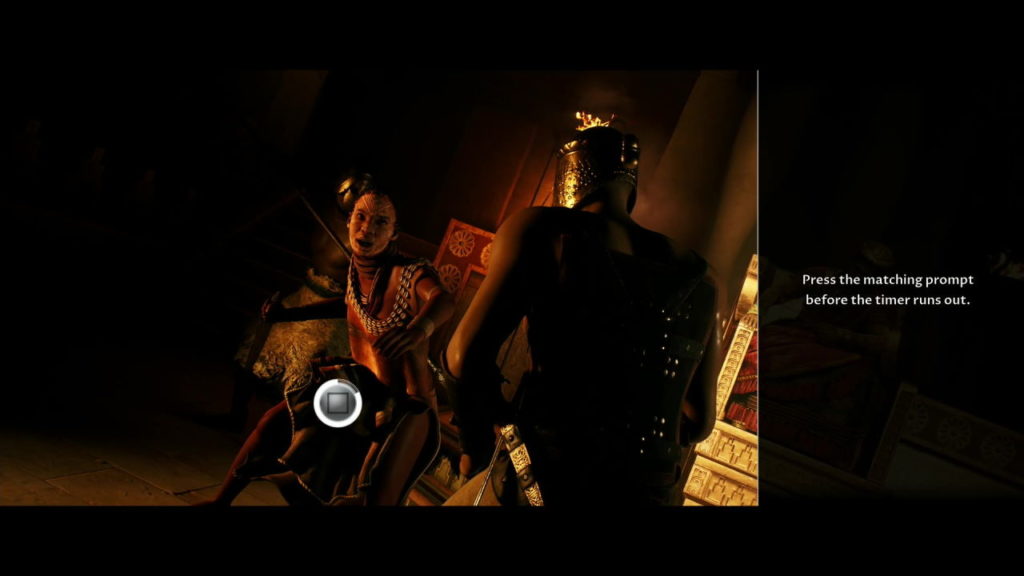 As has been the case throughout the series, Quick Time Events (or QTEs) play a key role in the story of House of Ashes. There are four key types to know about. They are:

All of these are introduced separately in the Prologue and can be practiced there with minimal impact on the story. If you complete all the QTEs in the game, the chance of anyone dying in your group dramatically reduces. So it is worth knowing and practicing them. Alternatively, if you are finding them too difficult, you can lower the difficulty level at the start of the games or toggle some QTE options in the Accessibility options in the Settings menu to make things easier.

CHECK THIS OUT: House of Ashes | All Picture locations

Key Decisions to keep everyone alive

Make sure Eric cuts the rope 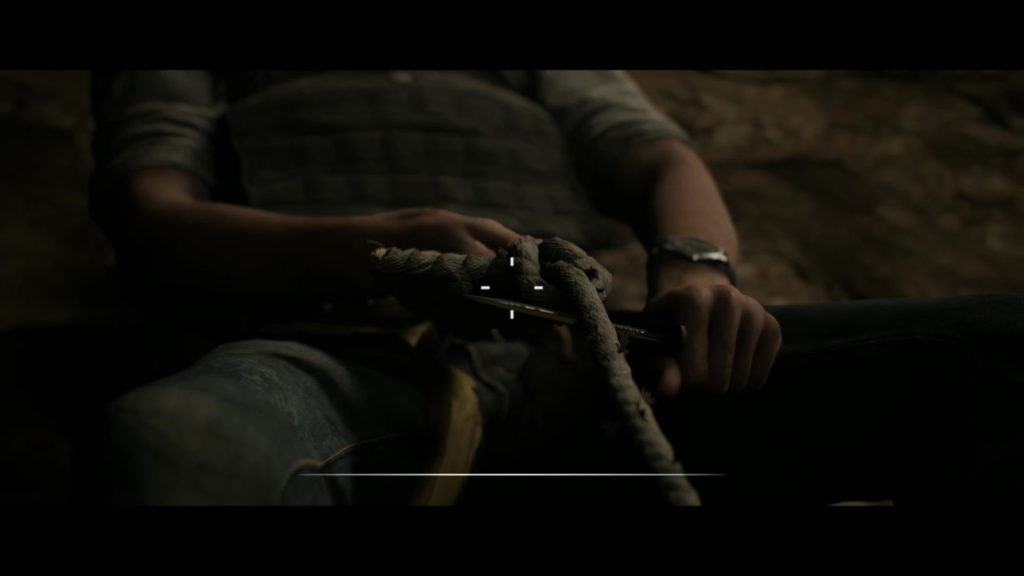 Whilst being chased down by Dar, Eric and Rachel will try to escape down a chasm with an old length of rope. The important thing to remember here is to keep following the QTEs as instructed and cut the rope. It may seem selfish to doom Rachel, but she will survive if you do this. If you keep fighting the urge to cut the rope to try and save Rachel, she will actually eventually cause Eric to fall and he will die unnecessarily.

Discover the purpose of the Ultraviolet light 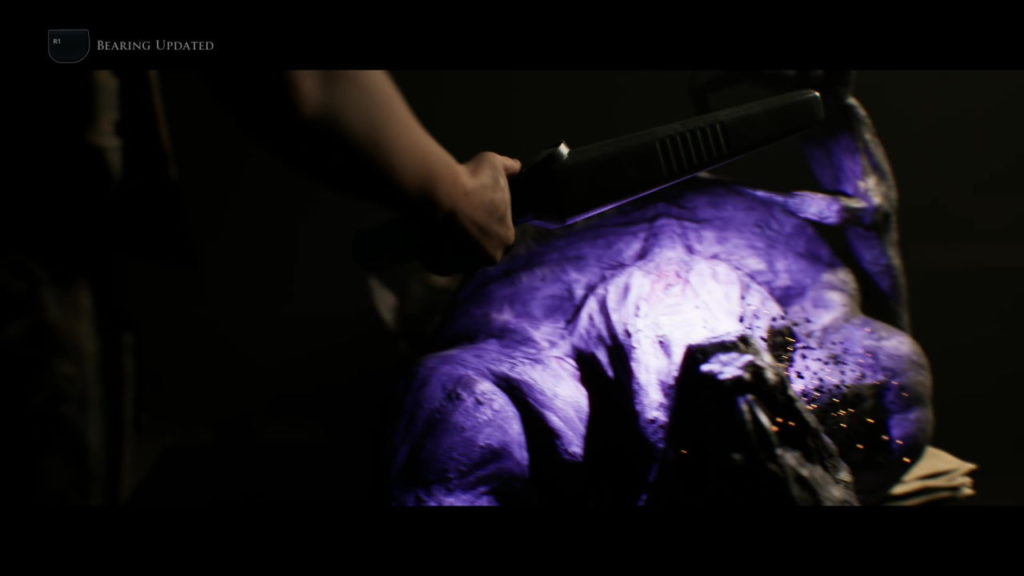 You will need to do a few things to discover the demons are weak to Ultraviolet light. Firstly complete Salim’s QTEs when he first encounters a demon to reveal the creature’s sensitivity to sunlight.

Then a bit later, when Nick and Salim must work together to take down a demon, make sure you hit the QTEs perfectly to ensure your relationship improves. Then convince Salim to surrender, so that he is with Eric when he is performing the autopsy.

He will mention the creature’s sensitivity to sunlight and Eric will discover this extends to the UV light he carries. He can then use this to tackle creatures later in the game. 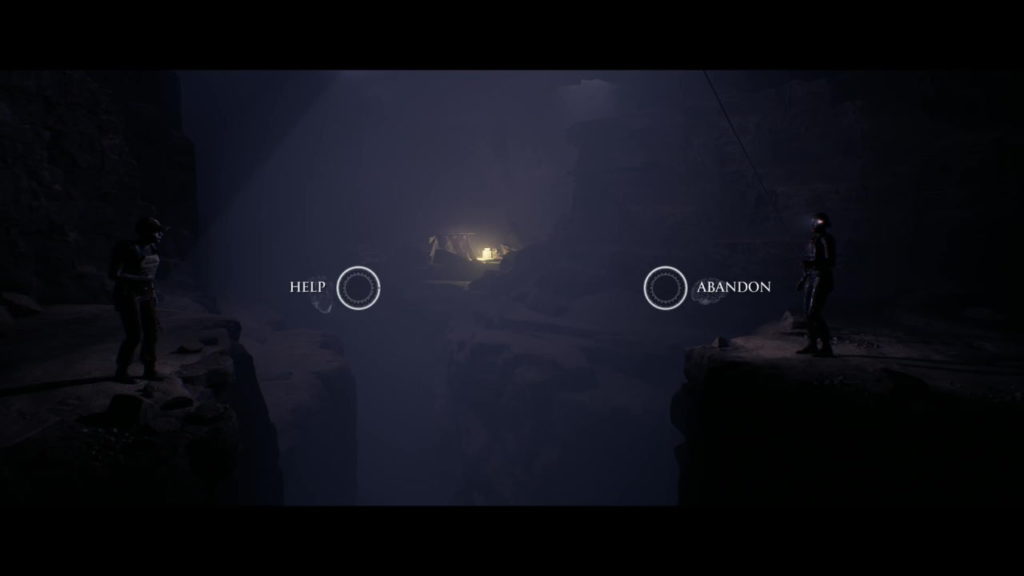 When Rachel awakens, she finds herself in the pit. After some exploring, she finds herself being pursued by a demon, who traps her. She is then rescued by a presumed dead Clarice at the last moment. As they scale the rocks upwards, it becomes clear the demons have infected Clarice somehow. When you get to the top you swing over the chasm, and are given a choice, to rescue or abandon Clarice. Choose to abandon her, because despite this feeling callous, it will save other members of your group later, and she is in reality beyond saving.

Remember how you set the charges 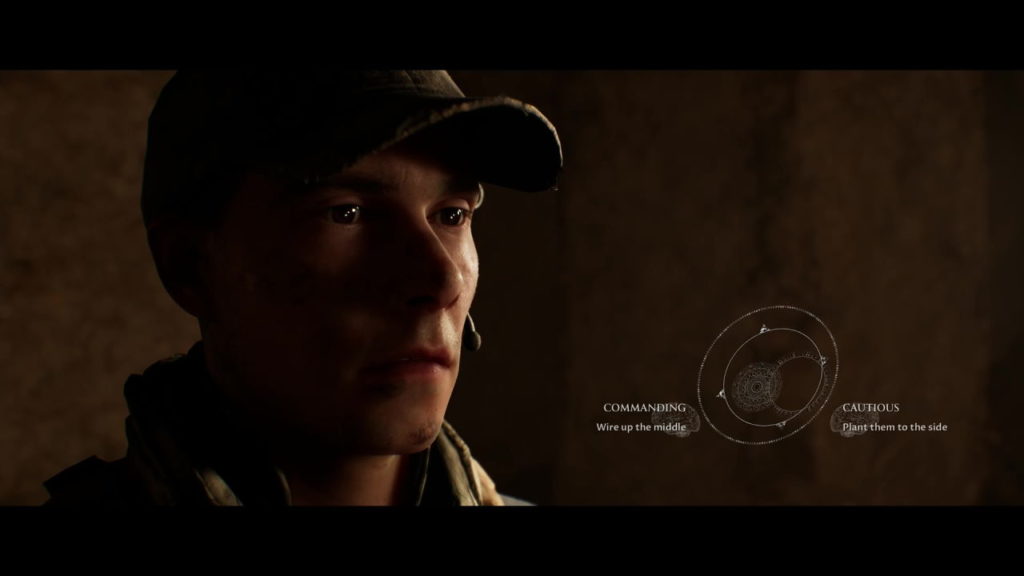 Nick and Jason will set some charges, and as Jason you get to choose whether to set them in the centre of the room or around the edges. What you decide doesn’t actually matter, the important thing is that you remember.

Later when the group is being chased by demons they will run through this area. You are controlling Nick, and are then tasked with shouting orders to Rachel and Eric about where to run to. You must tell her to go either down the middle or to the sides, wherever the charges aren’t. If you tell them wrong they will run into them and they will die.

Or, just get on the machine gun 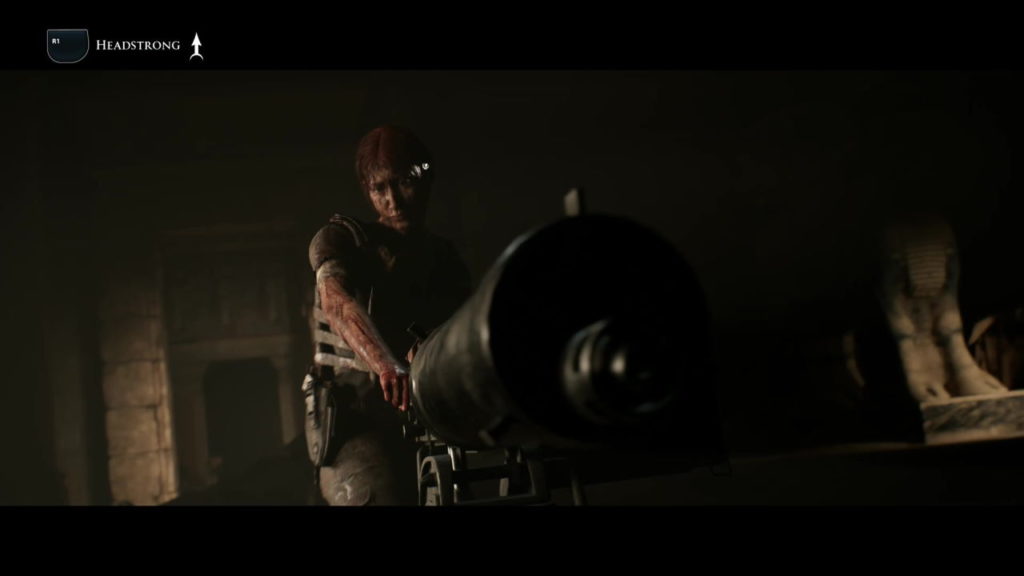 Just before that moment where Rachel and Eric could run to her death, you are controlling Rachel and are given a choice to Run or Fight. If you choose the Run option, the above applies. If you choose Fight, Rachel will join Jason in trying to hold off the demons. This is a satisfying section as you can take control of the machine gun in the main temple area that you’ve been eyeing up all game. It does require a lot of QTE success though to pull off so bear that in mind before choosing this option.

If you succeed in clearing the demons out with the machine gun, now when the group runs towards the charges, Jason shouts out the right command instead of you having to choose with Nick. So all characters make it through.

Salim’s choice in the Sacrificial Chamber 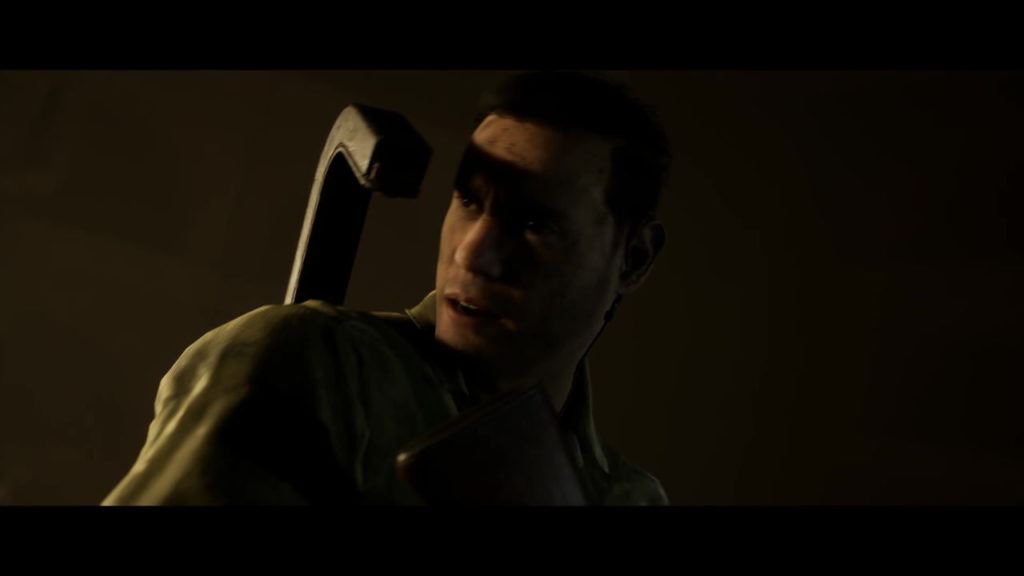 You will get a QTE in the Sacrificial Chamber as Salim where you have to choose to either shoot a demon coming at you or shoot the one pinning down Rachel. Assuming you follow the rest of this guide properly it doesn’t matter which one you choose, although if you’re keeping all characters alive, the most interesting option for the story is to shoot the one jumping for Salim. This will mean the one pinning down Rachel is infected, but that is OK.

Do not shoot Rachel 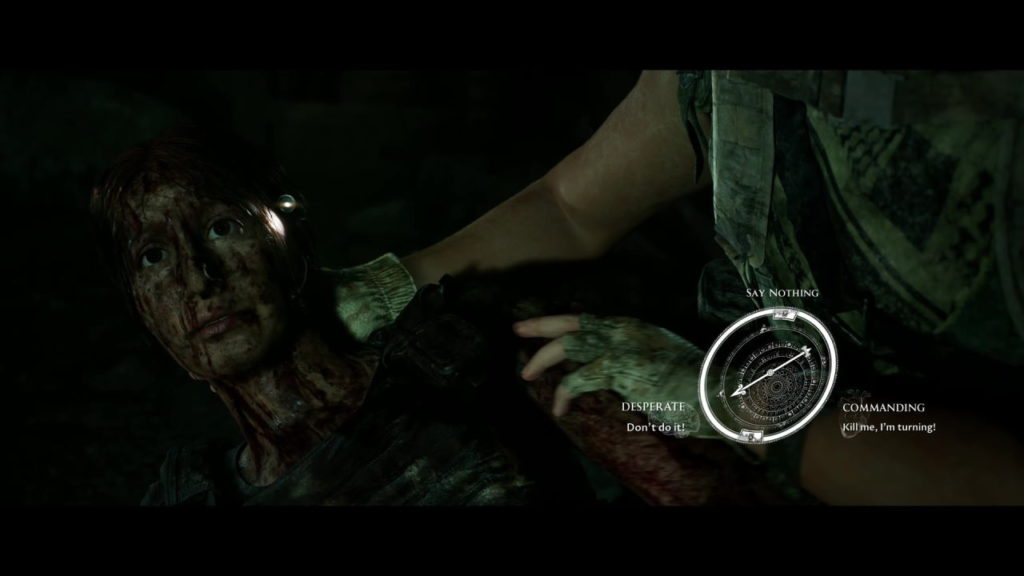 If based on your choices Rachel also ends up infected by the demons, like Clarice, then you may be tempted to shoot her towards the end of the game. But, as Rachel, plead for your life twice as Jason looks likely to shoot.

Also if you brought the White Phosphorus with you, do not complete the QTE event to commit suicide as this will also kill Rachel. Completing these actions will cause the group to come up with an alternative solution that results in Rachel being placed in a cocoon instead for her safety.

Draw out the parasite with the UV light 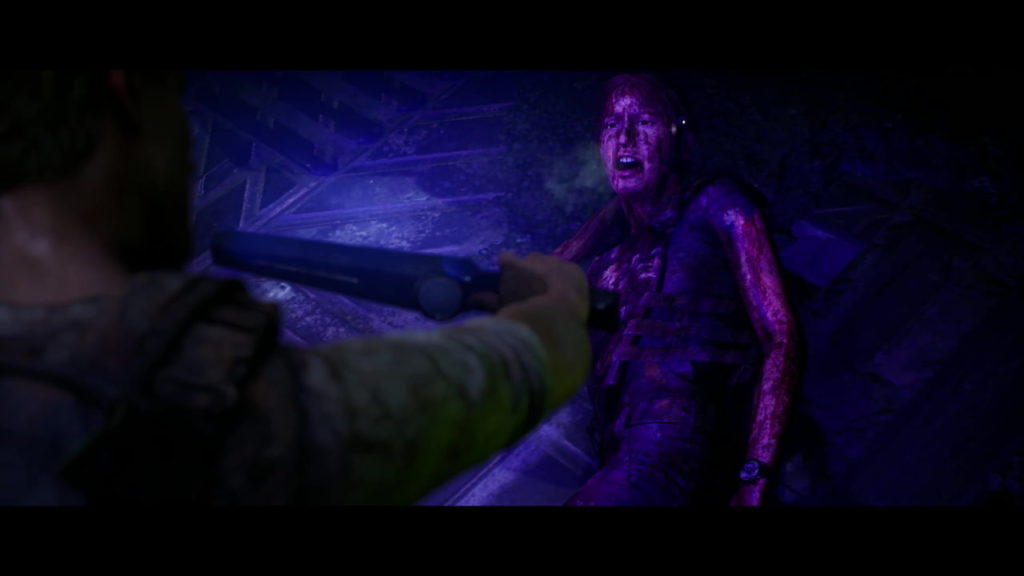 Instead of cocooning her though, Eric will use the UV light to draw out the parasite within her. This cures Rachel without the need to leave her behind. This is why it is important you learn the importance of the UV light earlier in the story. If you don’t, this won’t be an option.

Go back for Salim 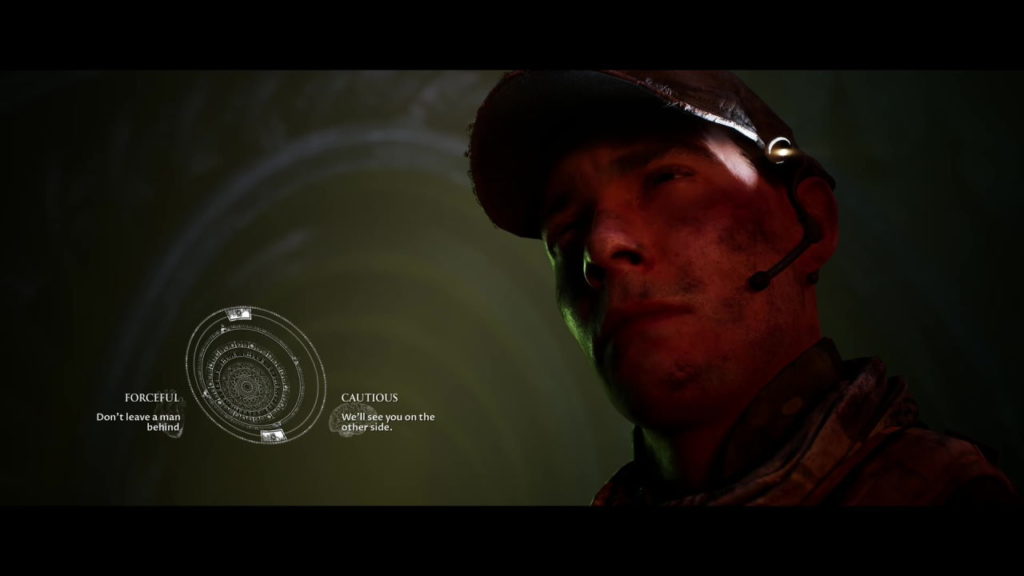 Once Nick has successfully set the charges and returned to the group, Jason will be given the option to go back for Salim or leave him. Whilst there’s still technically a way out if you don’t, it’s advised to go back for Salim, as the ensuing fight as a result of some successful QTEs is quite satisfying to watch. 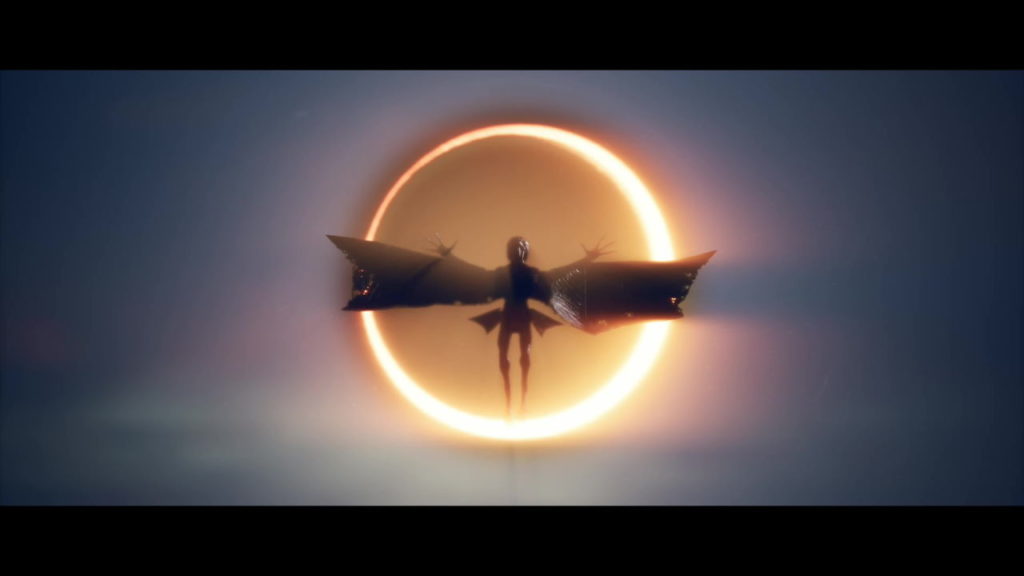 Just when you think it’s over, it won’t be and you’ll have to survive one final onslaught in the shepherd’s hut. This is a lot of fast-paced QTEs, but if you successfully pull them all off, then you’ll have finished House of Ashes whilst keeping everyone alive.