previous
Pokemon GO Safari Zone is coming to Seville, Spain
random
next
Unibet on the US market. Is it worth trying?
0 comments 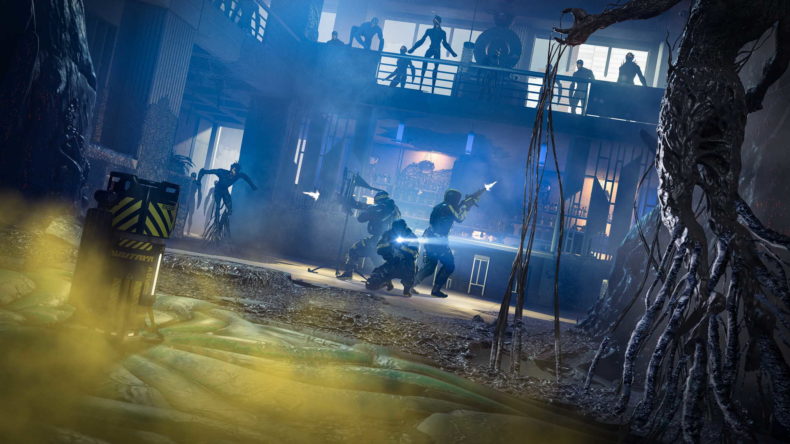 I’ve made no secret that I’m a fan of Rainbow Six Extraction, and so I jumped at the chance to play the new time-limed Crisis Event mode, Spillover. What I didn’t expect, is that somehow they made my least favourite game-type within Extraction into something I can’t wait to play more of.

What you’ve got here, is essentially a new mode that’s span out of a combination of some of the existing objectives. But on top of that, a new operator in the form of Ela’s sister, Zofia. Spillover is very much designed around defence, and mixes up the objectives that ask you to do the defending for a set time, getting increasingly more tricky as you play.

Zofia has an LMG, and whatever other gear you’ve unlocked she can use, just like any other operator. Her specialty is the KS80 Lifeline, a launcher that can fire stun and impact grenades. She is resilient to all blind effects and can revive herself. There’s also a new piece of tech you can only unlock by playing the Crisis modes, and it’s an auto-turret. This auto-turret not only damages Achaeans, but also makes them stumble, giving you a chance. It’s a separate piece of tech, and in the REACT Tech menu there’s a new sub-menu for “Crisis” tech, so you can work out what route Ubisoft is planning to go with the game, there. 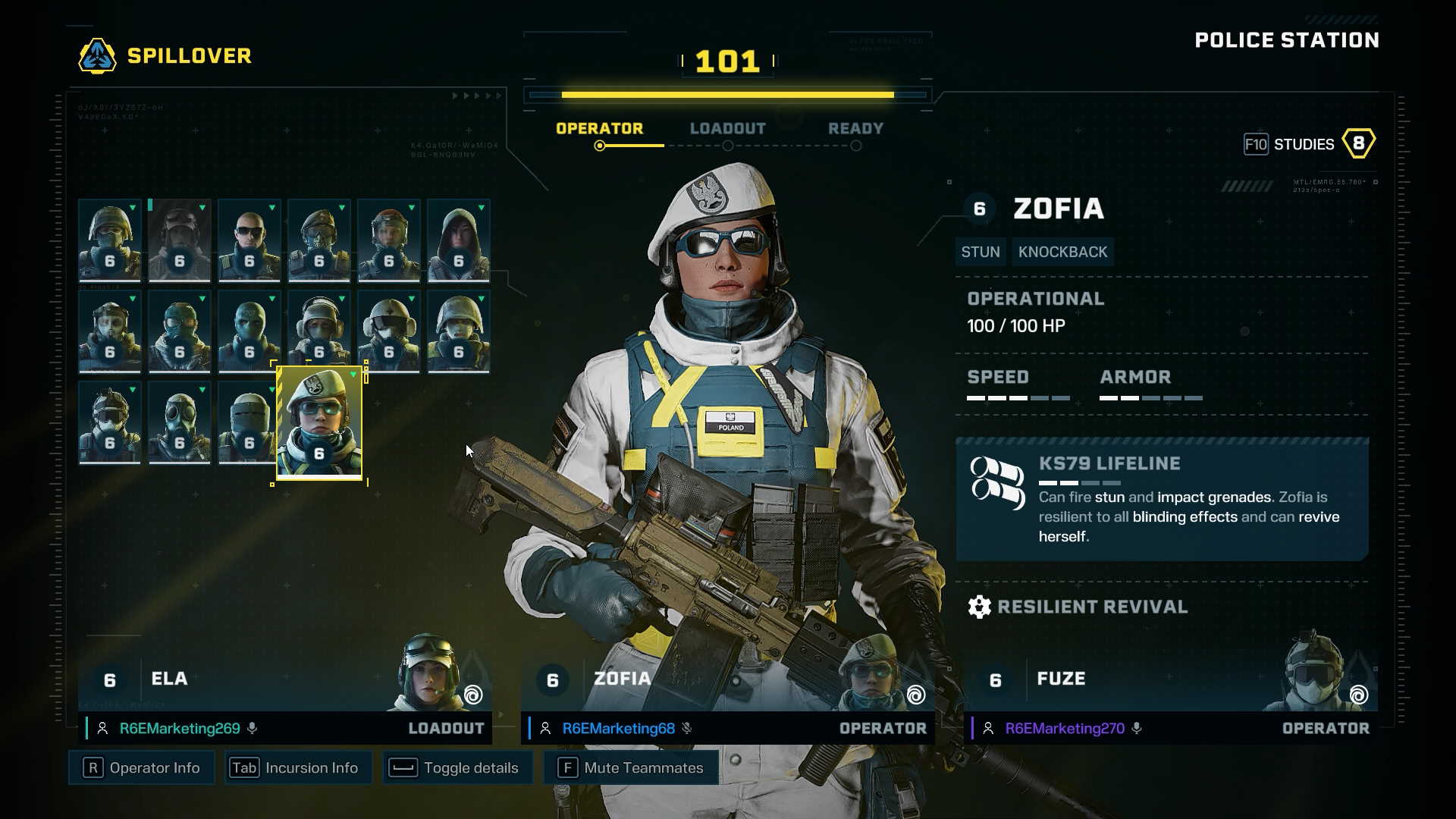 In Spillover, you’re dropped into a hot zone where the microbial colonies appearing all over the Sprawl are the source of an unprecedented Parasite Mutation. What this means in English is you and two friends (this mode requires three players) go into an incursion and have to plant Dissolution Agent Cannisters, which is a corrosive chemical weapon that will destroy the colonies. This means the enemies will (mostly) ignore you, and try and destroy the canisters first.

Each operator can carry a canister, and if you want, you can deploy three in three different colonies, making the difficulty much harder. My team of three did manage two at once, but it was hard even on the first stage of the Spillover event. To get 3000 XP you have to destroy two of these colonies to move onto phase two, which if you can destroy another three nets you 5000XP, with 7000XP available for the third round, which requires you to get rid of a further four colonies. You still get the 90% bonus if you extract, so it’s better to get out safely and not lose an operator, than to lose one and have to play the other modes to rescue them. 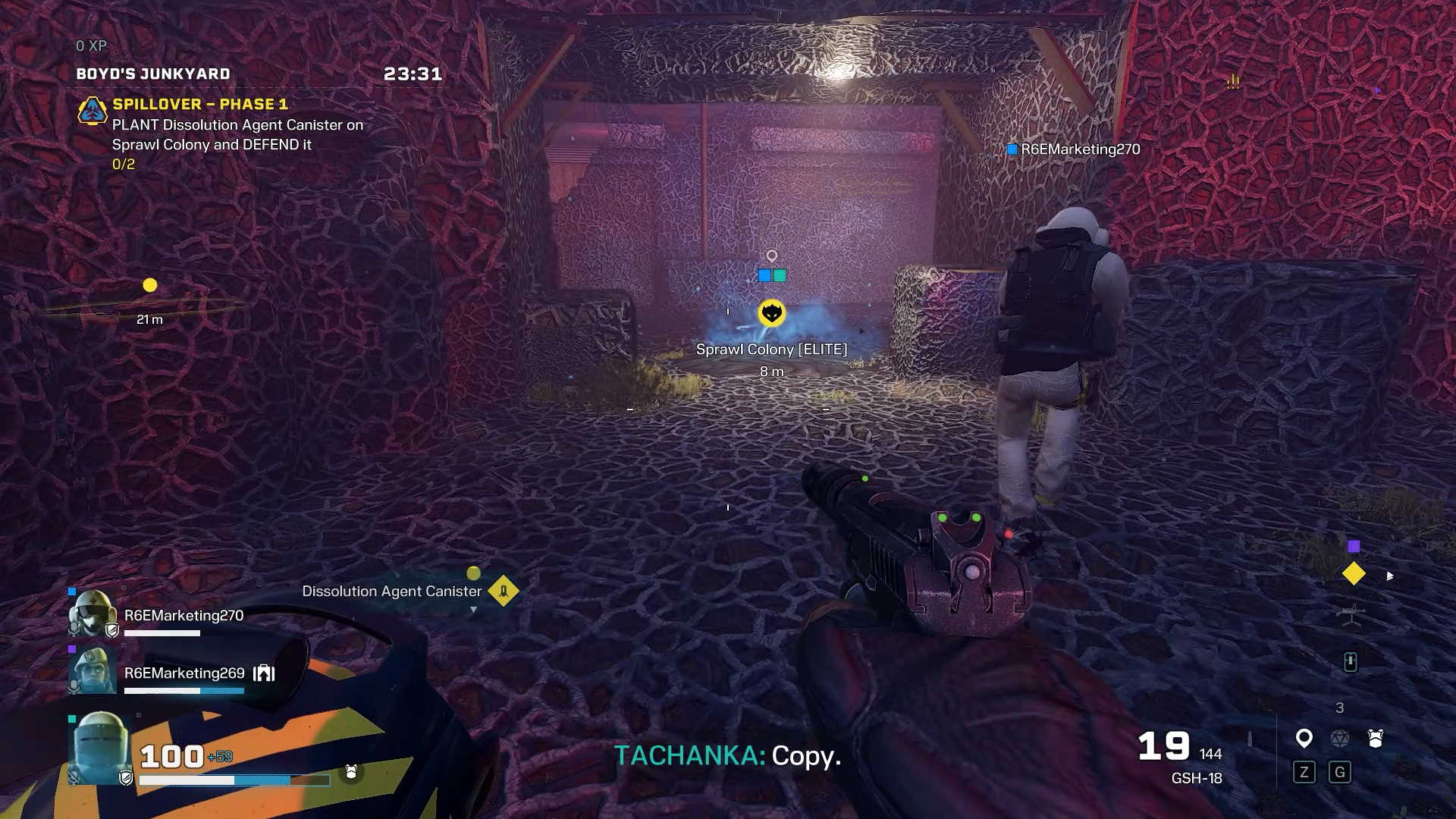 You get 25 minutes to do all of this, of course. While that sounds harsh, there’s less (read: no) stealth involved here. No Archaeans will come for you en-masse until you’ve planted the chemical charges. Then, mind you, it’s like a police siren is going off above your head. There are different types of colonies, as well. Some of them will throw elites at you; others cloaked enemies, or perhaps you prefer to start with spore-covered aliens? It’s a good idea in Rainbow Six Extraction‘s crisis Spillover mode, to remove the Elite threat first. The difficulty level shoots up as you play further, just like in the main game. Therefore, yes, get rid of whatever you struggle with first.

Teaching you how to defend

Due to the rising difficulty, and the fact it’s essentially a tower defense idea mixed with horde, there are some operators who work better than others. Newly added Zofia is excellent and feels designed for this mode. Tachanka feels utterly essential with his turret. With health, REACT tech, ability, and ammo available at the entrance to the level, you can really punish the enemy with a well-placed turret. Then, you can do it again for round two. 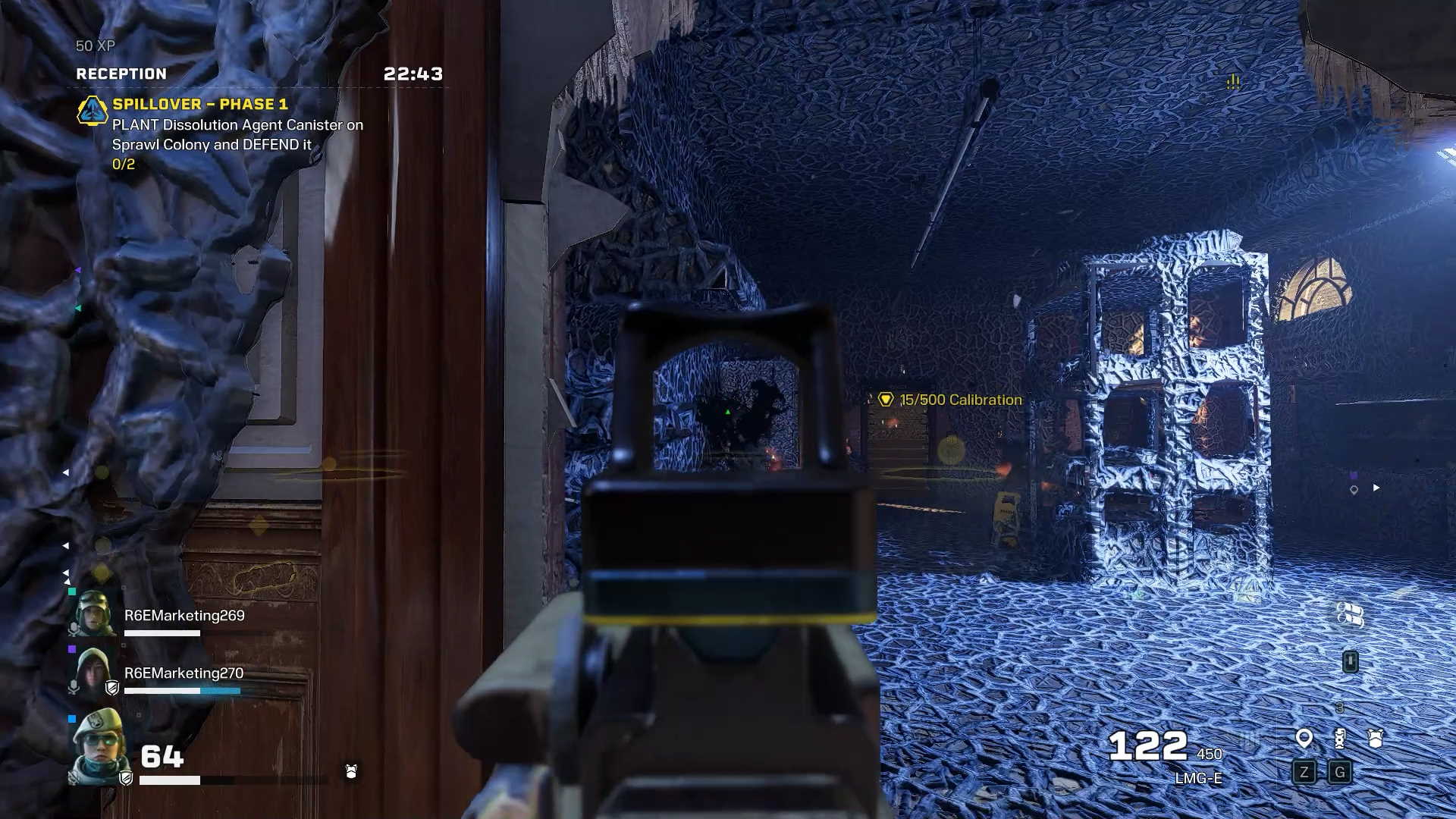 More than anything, Spillover taught me how to play the defensive objectives better than I was beforehand. Myself and the team here have struggled with the defensive objectives for Rainbow Six Extraction’s main game modes. Now, I think I’m ready to head back and kick some ass. It’s almost a shame this mode is timed because it’s a different level of tension. It’s a hugely stressful time going from slowly sneaking through a level, tagging enemies and stealthily taking them out, to a full-on automatic-weapon-fest, shooting anything that moves.

One thing that’s slightly odd is how much of Extraction has changed for this mode. For starters, the entire floor — everywhere — is covered in Sprawl. This is the sticky stuff that enemies secrete and it slows you down. When you first see it, it looks like a nightmare. “How are we going to get around with all of that?” you might think. But it doesn’t slow you down in this mode. It’s a good thing, but it’s odd. Likewise, if the Archaeans get your canister and it explodes, you can just pop another one in and the countdown timer won’t reset: it’ll continue. 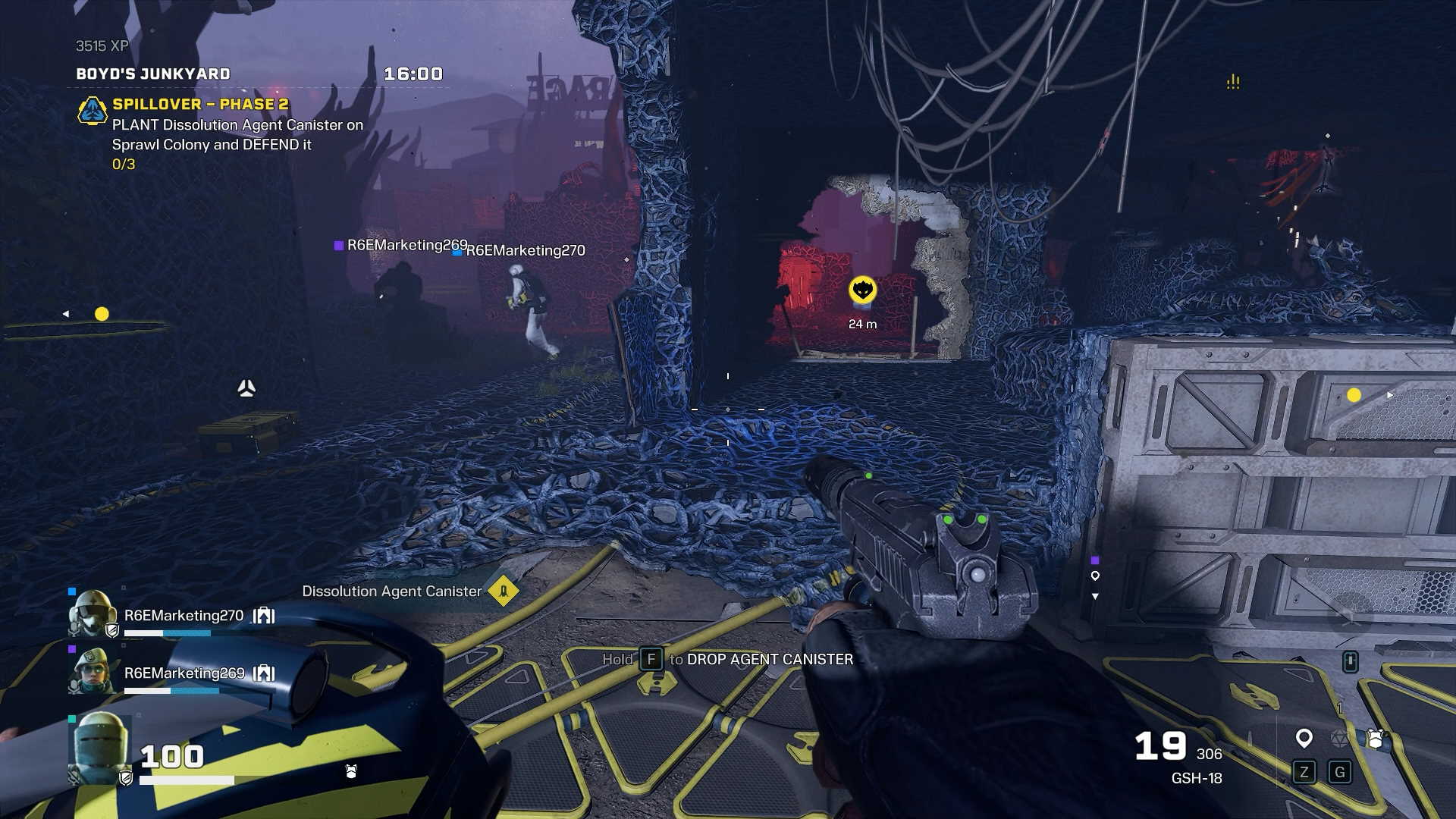 These things feel like concessions to make it enjoyable, otherwise, it could be just simply too hard. With such an emphasis on going loud, you’ll need to rejig your loadouts, too. There’s no need for a silencer here, that’s for sure. It’s a great way to get around 20k XP per run, and it’ll help you push down the otherwise, fairly grindy, progression systems in Rainbow Six Extraction.

That said, it’s hugely enjoyable, and a diversion from the rest of the modes. With a new operator and piece of tech, it’d be silly to not have a play of Spillover mode. It’s not going to make you suddenly pick up the game, but if you already have it through Game Pass, and put it down, it might be time to find your squad and get back into the fight.

Rainbow Six Extraction Crisis Spillover is due as a free update on all formats, right now.