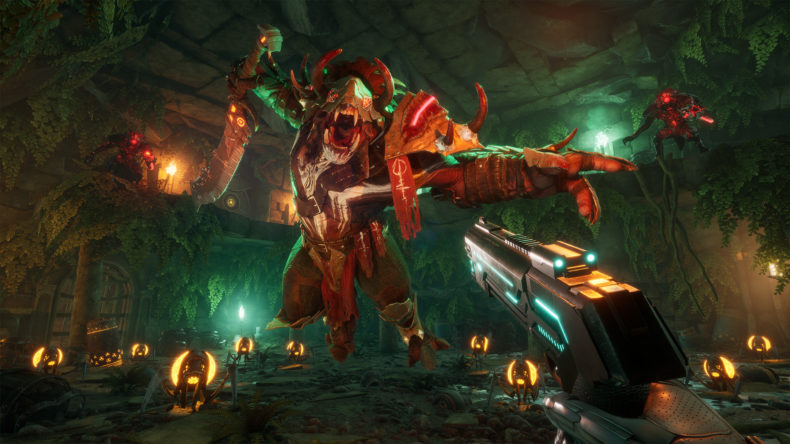 Having been a gamer long enough to remember the original Doom, it’s now become almost impossible for me to see the announcement of yet another fast-paced strafe-shooter set in some version of Hell and not roll my eyes so hard I can see my own brain. I can understand the appeal from the developer’s side – it’s an aesthetic more familiar to most gamers than their own bathroom. As such it may not surprise but, let’s be honest, no one goes in expecting much to have changed either. Warstride Challenges, a new early-access speedrunning shooter from Dream Powered Games, aims to at least inject some excitement into the familiar.

This is a shooter where the onus isn’t on accuracy or thoroughness, but rather on clearing each stage as quickly as possible. You’re dropped into a series of admittedly fairly pretty hellscapes and basically given the instruction that you’re only to waste time ripping and tearing if you’ve no other choice. Apocalypse or not, you’ve got shit to do. 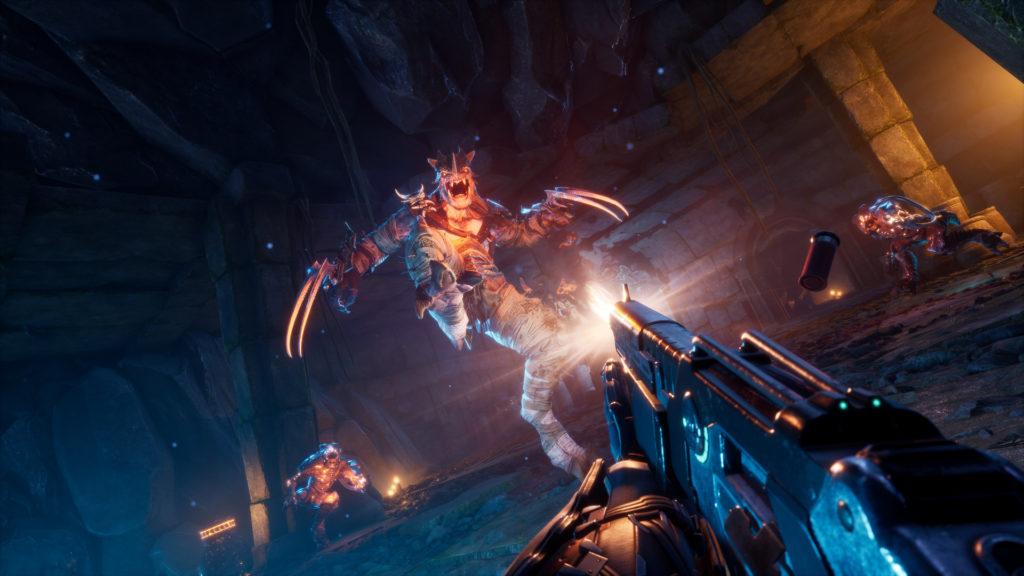 Warstride Challenges is a series of speedrun levels, short, fast-paced, and designed to be literally blasted through. Various techniques unlock as you progress, giving you new ways to beat the clock, and you’re awarded a rating at the end of each stage. That’s about it for core gameplay. There are no collectibles to find, no secrets to unlock. Run and die, or run and succeed, and failure respawns you in a heartbeat just as in Ghostrunner.

Right off the bat you’re taught to bunny-hop. Gamers who remember the Quake days will be familiar with the concept, and it’s one utilised by speedrunners in pretty much any game from Super Mario to Elden Ring. Jumping is quicker than running, but only if you time it perfectly. It’s the simplest concept and a great place to start, but before long you’ll unlock techniques like Shockwave to destroy obstacles and Slow Motion which, well, you can work that one out.

Enemies come at you to quickly to examine. They’re all variations on standard “demon-with-too-many-teeth” but it doesn’t matter. There’s no time to hang around chatting about the weather as you plaster the nearest wall with their brains while skidding through what’s left of their lower half. 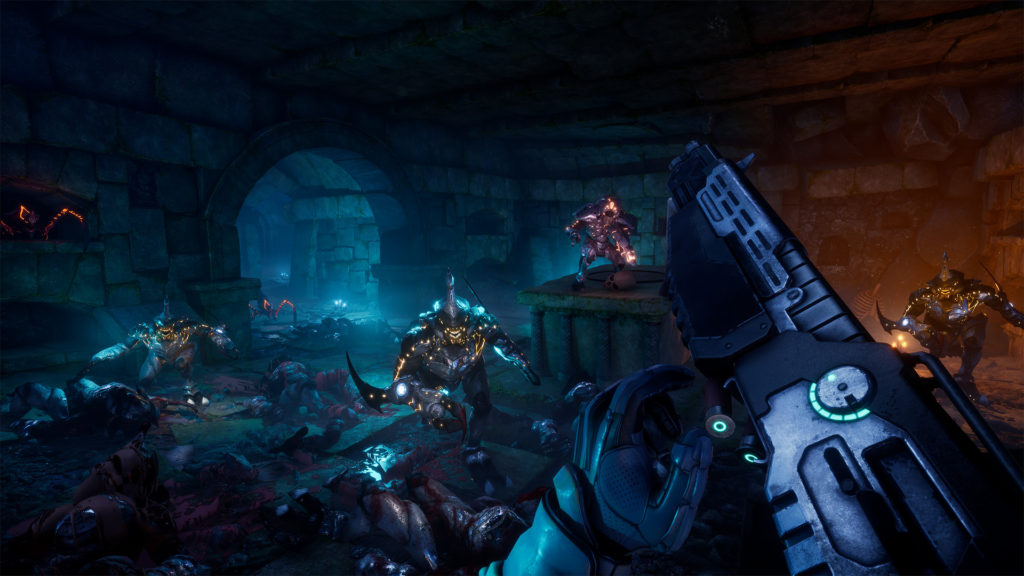 If anything, Warstride Challenges needs some work to make into a more cohesive experience. Running and shooting is fun, but if you end up bouncing through some levels and settling for a B or C knowing you can come back later, you may be disappointed to learn that skills you unlock don’t go back with you. This feels like a bit of an oversight, as being able to return to earlier stages with new skills would add an even deeper level of replayability.

There are currently over 90 stages available in early access, with double that number promised. It sounds a lot, but you’ll be clearing most in minutes. It behoves you to get the highest score possible first time round though, as once you’re used to certain powers returning to earlier levels without them is a little jarring. My accuracy is so awful that I would use Shockwave to clear enemies from my path, and going into earlier levels without it felt weird. 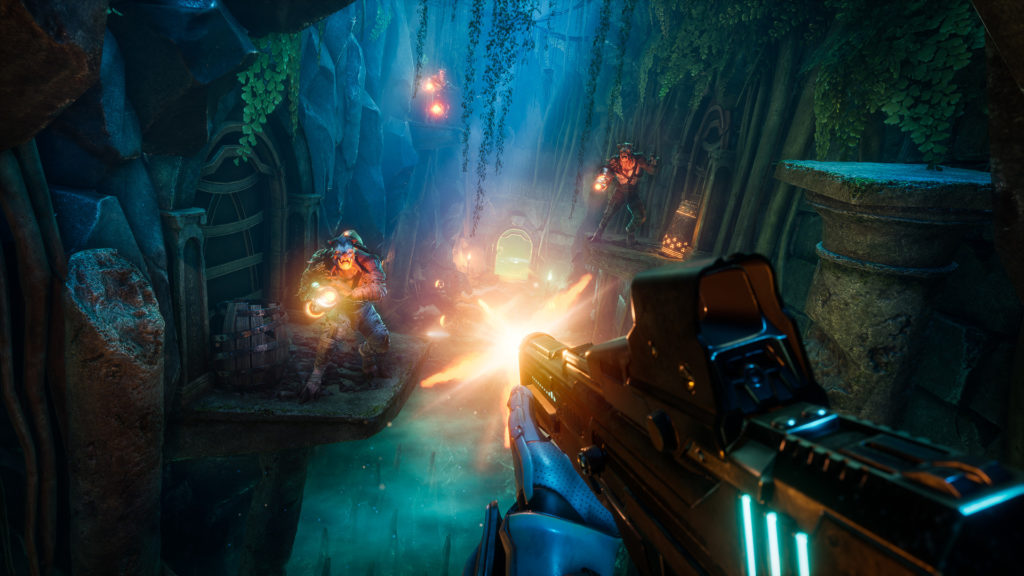 It’s hard to gauge the potential of a game like Warstride Challenges. Speedrunners will dig it, sure, but it may actually be too simplistic for the hardcore. A lot of the thrill of speedrunning is found in games not necessarily built for it, in finding exploits and shortcuts that shave milliseconds off a personal best. And Warstride does a solid job, but it’s the only job it does. There’s not a great deal of depth or variety in shooting demons and switches and running really fast.

But maybe there doesn’t need to be. This is a game designed for pure fun and adrenaline, which counteracts the familiarity of its blue or orange-hued levels by being such a fresh and focused experience. If you’re looking for something that prioritises thrills and replayability over story and complexity, Warstride Challenges could be the breakneck blaster for you.

Senior Content Editor Mick has been playing games for over 30 years and writing about them for around 12. After drifting from site to site for a while, settling briefly at the now-defunct Made2Game and freelancing for the gone-but-not-forgotten NintendoGamer Magazine, he came at last to rest at Godisageek. Mick has been a reviewer, staff writer and content editor here for some time, while also moonlighting a little for Red Bull Games. He has 4 kids, has written 2 novels, and sometimes even manages to pay a bill or two. You'll usually find him defending the galaxy in Destiny 2, battling evil in Diablo 3, or lurking in the background on Twitter. Find him there @Jedi_Beats_Tank, or on XBL (JediWaster247), PSN (Jedi_Waster) or Nintendo (JediWaster).
MORE LIKE THIS
Early Access