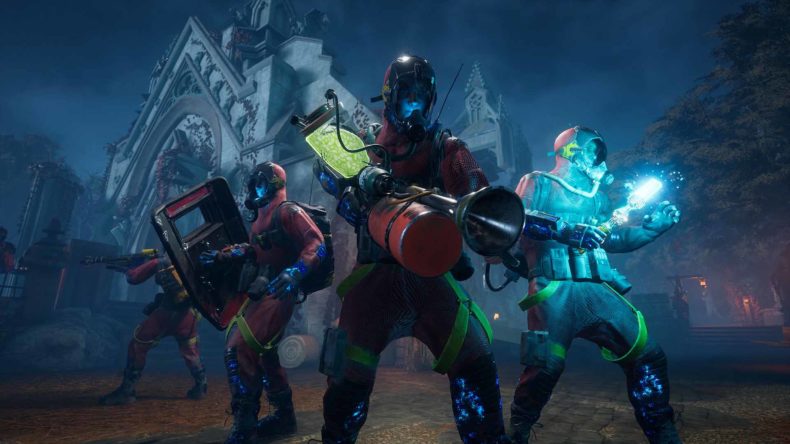 It’s not often I really get into a competitive multiplayer game. Whether it’s shooting down the enemy or winning a battle royale, I find it hard to care about beating real people in a test of skill. Now if our core abilities are different that’s another story, I can’t get enough of asymmetric games. It took mere seconds of the Midnight Ghost Hunt trailer for me to know I needed to play it, and by god I wasn’t wrong.

The premise of Midnight Ghost Hunt is spectacular. A team of four ghost hunters arrive at a location with five minutes to locate a team of four ghosts. The ghost can possess any of the objects in the level, and the hunters have a variety of gadgets they can use to locate them among the mess of miscellaneous boxes and vases. If after five minutes any ghosts remain, the clock strikes midnight, the tables turn and the ghosts revive and become super powered. The hunters win if they can survive five minutes with them, but it’s fair to say that doesn’t happen often.

Playing as a ghost hunter is probably the simpler of the two sides. On the way to the map selected you’ll be given the chance to choose your loadout, with one weapon, gadget and perk available to choose. All the weapon types you’d expect are here, from shotguns (loaded with salt) to ghostbusting laser machine guns. Some of these are better against objects, whereas others deal more damage to exposed ghosts. After a bit of experimenting you’ll find one that works for you. 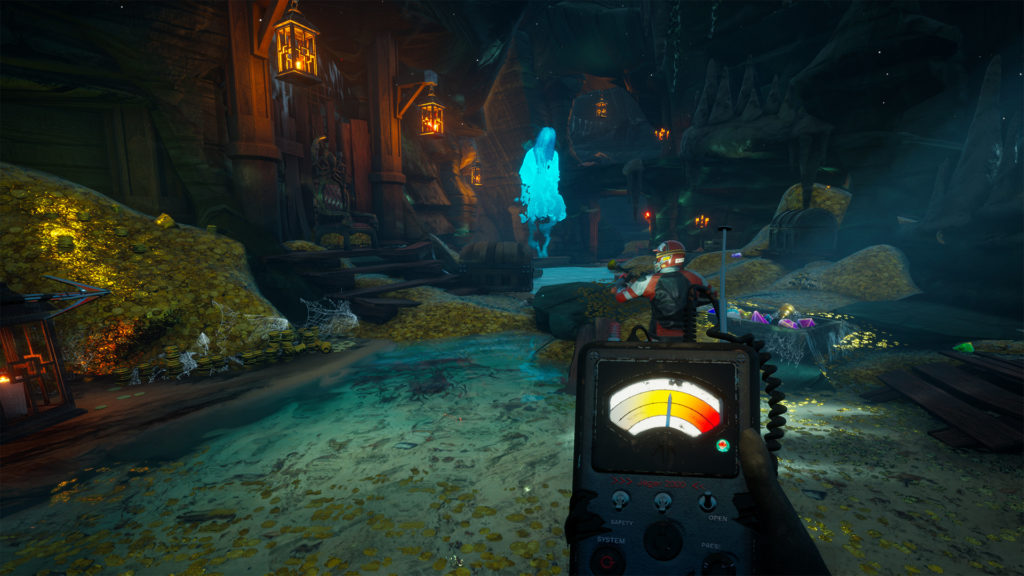 The gadgets are much more interesting than the guns. Firstly there are the tracking gizmos, some give you a vague idea of where a spooky foe is hiding, another shows a trail if a ghost has been moving around too much. There’s also a vacuum you’ll need to suck up the shards of a defeated foe (so they can’t be revived) as well healing items and traps to stop the poltergeists escaping.

If you end up on the side of the undead; don’t think you’re in for a boring game of hiding in a statue and hoping nobody finds you, because being a ghost is just as active. This is because if you sit still for too long your Ectoplasm meter builds up, which makes gadgets better at detecting you and eventually leads to the object you’re possessing vibrating and glowing. To counter this you’ll need to move around as much as possible, preferably without a pesky ghostbuster spotting a chair gliding across the floor.

Although five minutes doesn’t sound like a long time, you will most likely be spotted at some point before midnight. That’s where your special spooky abilities come in handy. The most basic of these are solely there to help you escape capture, such as a brief (partial) invisibility, or a huge spectral dash you can do between floors of a map. Other skills require a bit of finesse to pull off, like the ability to send an item whizzing down a corridor which a hunter might think is you, or creating a clone of yourself to keep you busy. There are so many options you can use to try and outsmart the other team. 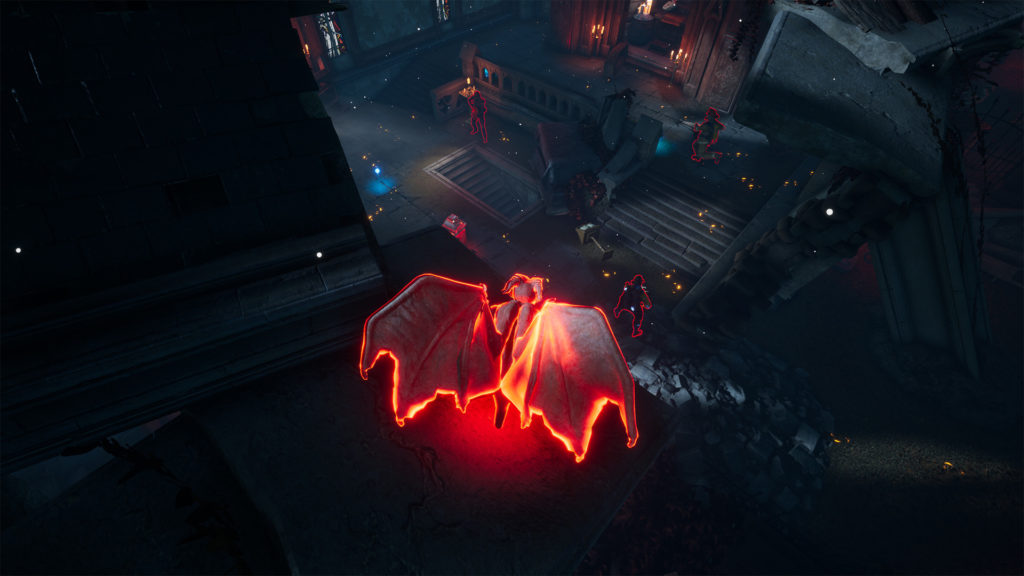 Sometimes death (or I suppose double death) is inevitable, and you’ll find yourself beaten after only a minute or so. This doesn’t mean you have to sit around bored while you wait for midnight though, because dead ghosts have powers too. To try and assist your teammates, you can select and use one of a whole host of abilities. You could create a “cold spot” which confuses gadgets into thinking a ghost is in a place of your choosing, or maybe you’d prefer to knock over a vase to confuse the enemy. It’s a clever way of making sure players aren’t tempted to disconnect before the big end game switcheroo, and I really enjoy messing with those pesky hunters.

When the clock finally strikes twelve in Midnight Ghost Hunt everything changes. All the ghosts resurrect with a new menacing red aura, and have an extreme boost to their health and power. Before midnight, ghosts are more than welcome to try and throw objects at hunters or use their powers to try and down them, but it isn’t until the endgame that it’s really possible to consistently wipe out a competent team. Watching a group of hunters hide in a corner and make their last stand is always incredibly satisfying, as is launching a sofa at them and watching them flop to the floor.

It wouldn’t be fair to talk about Midnight Ghost Hunt without mentioning that it has the best map design of any multiplayer game I’ve ever played. The environments are just so exciting, there’s a museum full of Egyptian artefacts and models of planets, a school decorated for prom night full of balloons and a stage set up for the band, and even a spooky pirate ship complete with possessable cannons you can fire at ghost hunters. As well as having a fantastic aesthetic, each level is also set out perfectly, with plenty of clever hiding spots that different builds and playstyles can make use of.

It’s honestly hard to believe that this game is currently in Early Access, because it’s hard to see what really needs doing before it hits 1.0. Everything just feels so well balanced and polished, and I’m yet to encounter a single bug after playing for over 15 hours at the time of writing. 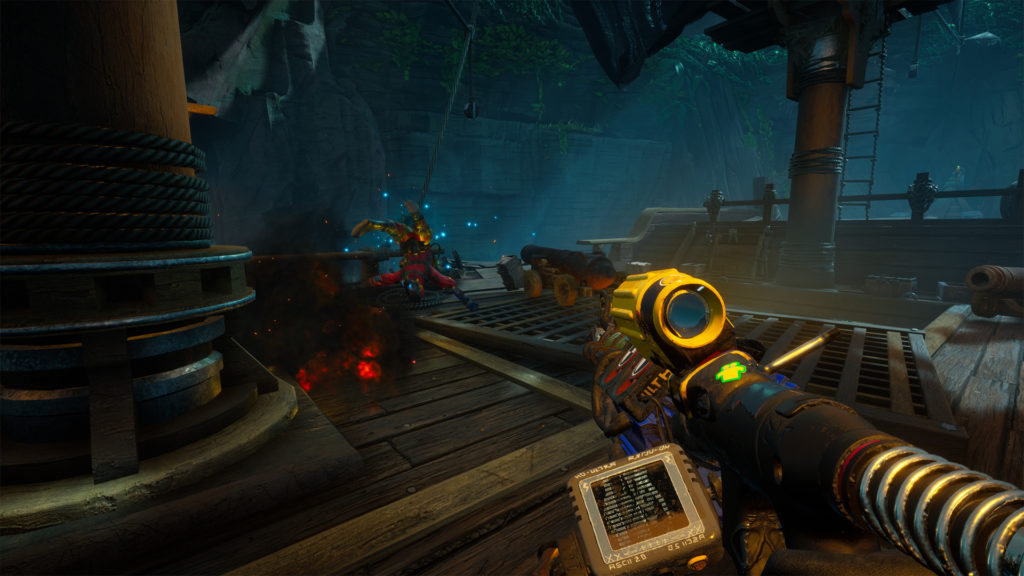 There is one issue that’s worth mentioning about Midnight Ghost Hunt though, and that’s the new player experience. The tutorial doesn’t explain how the game works well enough at all, especially in terms of what happens when the Ectoplasm meter builds up. Because of this, my first hour or two was spent hopelessly lost, unable to work out why hunters kept finding me so quickly. You also start with all but a handful of weapons, gadgets and abilities locked, and need to play a good few games before you can start unlocking things you’d like to try out. It didn’t take me long to find what worked for me though, and once you’ve got the kit you want then you can start saving up for those flashy skins and victory poses.

There are plenty of other little aspects of Midnight Ghost Hunt I could go gush about, too, like how both sides can change their loadout in the middle of a game at their spawn point if the other side brought some unexpected kit, or how many diverse perk options there are (like my favourite ghost perk that lets me see nearby hunters through walls). It’s a seriously deep game, with plenty of options to try out with your friends for a night of hunting and spooking.

Midnight Ghost Hunt is the first competitive multiplayer game that’s hooked me like this in a long time, and is so incredibly polished for an early access title. Both sides are fun to play as, and the gameplay, loadout options and stages are so creative you’ll never want to stop playing. If they can improve the new player experience a little before they hit 1.0, then they’ll have created something truly special that everybody should try out.