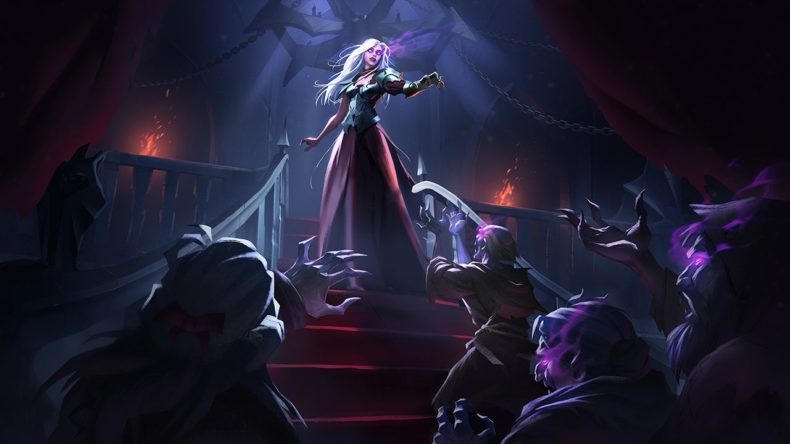 Despite the valiant efforts of Morbius, Twilight, and every Underworld film except the first one (well, maybe that one as well), vampires are still cool. There’s an effortless credence in the concept – suave, sexy, sultry, powerful, timeless. And by and large games that let you play as a Vampire are rarely “bad”, and often present innovations purely by the grace of developers putting their own spin on the mythos. The Blood Omen franchise is a gaming touchstone, for example, while Vampire: The Masquerade continues to release a new game roughly every eleven and a half minutes whether we play them or not. The latest venture into the macabre world of the bloodsucker is V Rising from Stunlock Studios, a Survival RPG with a lot of big ideas.

Casting you as a customisable neck-nibbler, V Rising begins when you awaken from centuries of sleep with a grumbling belly and a taste for the red stuff. The onus is on becoming as powerful as you can, either alone or in a Clan of four. You’ll kill people, you’ll turn into various animals, build a castle, tussle with vampire hunters, and strip-mine several hundred acres of verdant woodland to build that new armoire with matching end table you’ve had your eye on.

I’ve had access for around five days at the time of writing, having jumped into a pre-Early Access beta. The game enters its Early Access phase on May 17, and from what I’ve played I’ve a feeling it’s going to turn some heads. 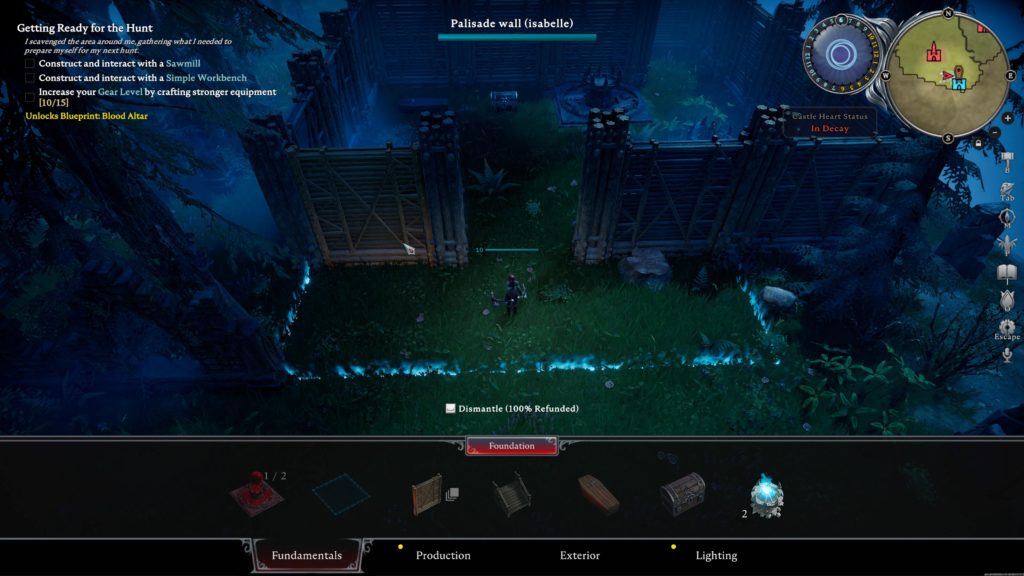 It leans fully into the Vampire mythos, eschewing the trappings of Christian dogma that latched onto the legends over the years and presenting your vampire as a veritable force of nature. It’s an RPG without character levels, instead focusing on Gear Level and unlockable abilities that come from hunting what amounts to repeatable bosses. You can be killed, but cannot die, and even burning away to a crisp in the sunlight will see you respawn at the nearest coffin to continue your reign of terror.

Being a Survival game first and foremost, you’ll begin by killing skeletons to craft crude weapons and armour from bone. Then you’ll progress through the standard gauntlet of leather, copper, iron and so on. No silver though, I imagine. No self-respecting vampire would keep silver in the house. Through the early hours you’ll chop trees, break rocks, harvest gems and animal parts, reagents and materials. Right away you’re told to pitch your castle somewhere, thought half the battle is finding somewhere that isn’t already someone’s summer home.

You’re never alone in V Rising. Even if you opt to play a PvE server, other vampires will be there and you can group up with them if you choose to. If you find them sleeping you can also drag them around, presumably so you can get them under shade if they logged off or got disconnected in an exposed area. You’ll always be in the world even if you’re offline, see, and logging out while you’re anywhere but in your coffin means the persistent world can still mess with you. 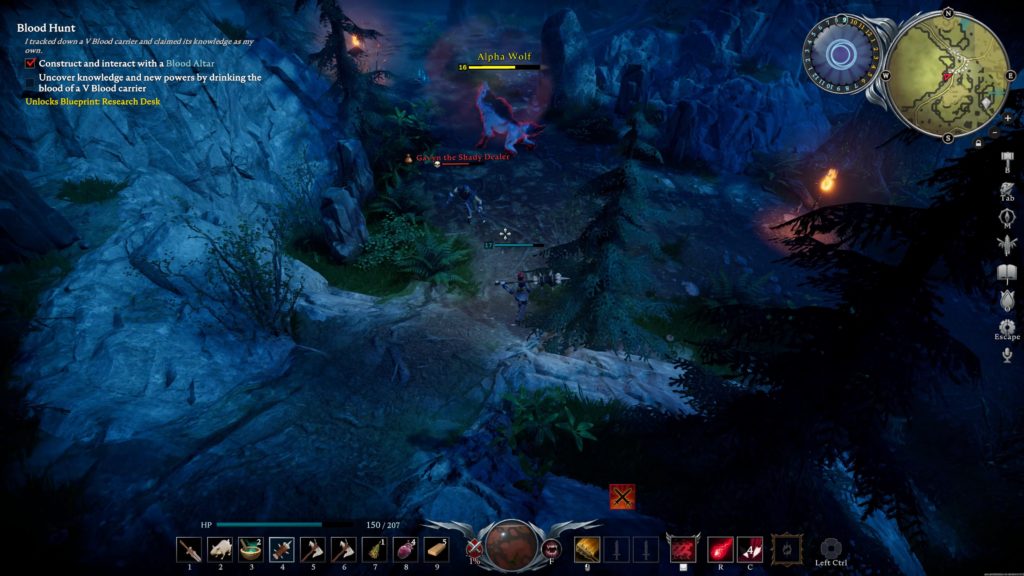 In a PvP server it’s every drac for themselves, and other players can attack you, destroy your castle, or even take ownership of it completely. Think Ark: Survival Evolved only with no dinosaurs and eighty-seven wolves to every human being. If you’re heading into a PvP server be prepared to fight a lot and be griefed a lot. This is a game designed for that, but the rewards in endgame are apparently more evenly distributed.

Contrastingly, in PvE your focus is on surviving the world and hunting named NPCs whose special blood will bestow properties and knowledge upon you. Scarfing them down is like drinking textbooks, and you’ll receive new abilities and crafting recipes. Early on some of the crafting is frustrating, when the game says you need a certain reagent to make a certain refinery, and the refinery in question is the only way to get that reagent. Instead you’ll need to go kill humans and raid their settlements and hope they drop what you need.

Your biggest enemy is the sun. Not only will it obliterate you in seconds if you stand in it, it also makes you skulk in the shadows like a cruel headmaster if you find yourself stranded in the wild at sun-up. The effect is deliberately extreme: the screen explodes in radiance and shakes like a bobblehead on a tumble dryer as you’re reduced to the contents of an ashtray. 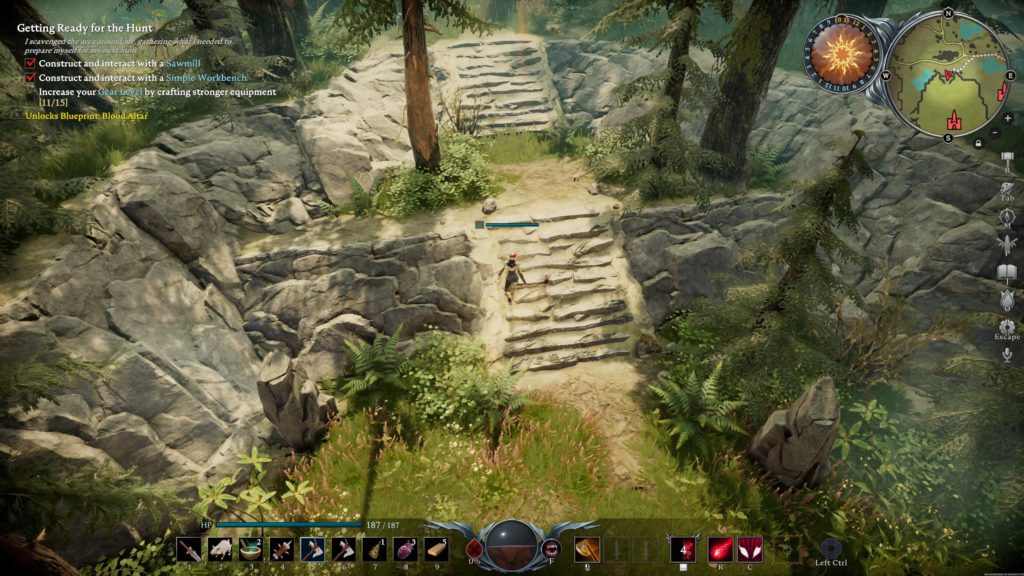 But the use of shadow is masterful, as you can observe the rotation of the sun by the shadows it casts and stay in them to protect yourself. Heading back to your coffin on a bright morning, sticking to the shadows so your head doesn’t explode like a uni student the morning after a gig presents its own challenge and feels not only immersive but cautionary. You’ll do your best to not get caught out and it adds another dimension to the world.

Annoyingly, though, you can do very little while the sun is up and because the world is persistent you can’t sleep to fast forward. All you can do until your castle has a roof (several hours in) is work from the shadows or wait around under a particularly big tree. It’s an issue for sure, though later you’ll make capes and items that give you sun protection.

My biggest gripe up to now is the combat. The isometric viewpoint works fine, but not necessarily with hack and slash combat. The reliance on the WASD system while using the mouse to turn your character makes combat feel awkward and clumsy to me. Controller support would be a major boost, or even a click-to-move setup more akin to Diablo. As it is there are too many keys to remember while you’re being assailed from all angles by bandits, archers, thugs and monsters. 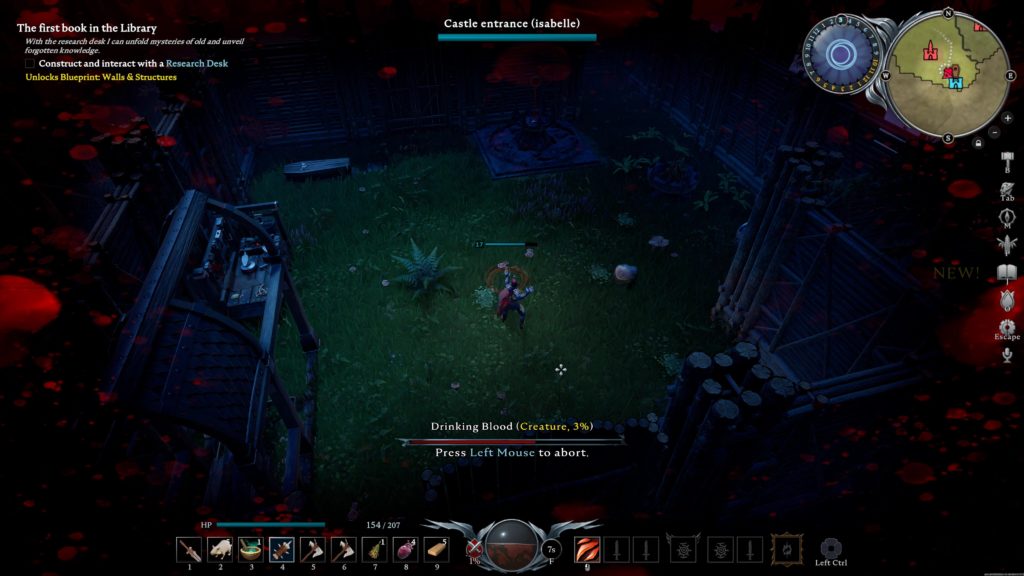 Launching into V Rising at this early stage shows a game with unbelievable promise. It’s not hyperbole when I say that this game is all I want to play right now. It got its fangs into my neck without even needing to buy me dinner first, and I’m living all my Legacy of Kain and Interview with the Vampire fantasies in one go. Skulking into villages at night, using the shadows to stay concealed, pouncing on weakened foes and draining them of precious blood with which to heal or power your castle’s magic is everything you could want in a vampire experience.

V Rising could be the next big survival game. Whether you want to play alone, with, or against other players, this has you covered. Once you get the hang of the combat you’ll begin to feel more and more powerful, crafting a towering castle that will terrify any delivery driver to their very core. I’m confident this will do well, and Early Access will continue to add new touches, tweaks and content between now and the eventual full release. If you’ve ever dreamed of owning your own castle, only descending into the neighbouring villages to rip people open and finish them in one swallow like a Froob, V Rising may be the game you’ve been waiting for.

Senior Content Editor Mick has been playing games for over 30 years and writing about them for around 12. After drifting from site to site for a while, settling briefly at the now-defunct Made2Game and freelancing for the gone-but-not-forgotten NintendoGamer Magazine, he came at last to rest at Godisageek. Mick has been a reviewer, staff writer and content editor here for some time, while also moonlighting a little for Red Bull Games. He has 4 kids, has written 2 novels, and sometimes even manages to pay a bill or two. You'll usually find him defending the galaxy in Destiny 2, battling evil in Diablo 3, or lurking in the background on Twitter. Find him there @Jedi_Beats_Tank, or on XBL (JediWaster247), PSN (Jedi_Waster) or Nintendo (JediWaster).
MORE LIKE THIS
Early Accessfeatstunlock studiosV Rising