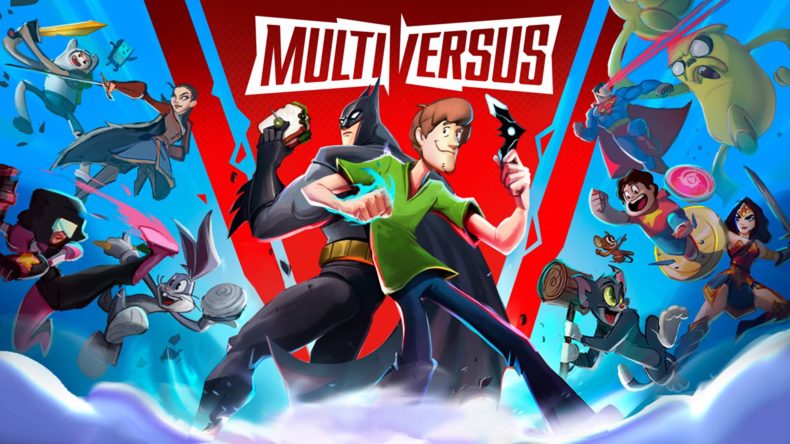 A personal pet peeve of mine is when people call games that take inspiration from others “clones”. This happens more with some genres than others, but never ceases to annoy me. Why does every monster battling game have to be a Pokemon clone? Nobody called Halo Infinite a Wolfenstein 3D clone! I’m getting worked up about the word clone today because I’ve been playing a lot of MultiVersus, which takes a lot of inspiration from Super Smash Bros and does not deserve to be looked down upon because of it.

MultiVersus takes characters from a variety of different franchises and throws them into an arena to do battle. You and up to three other  players will be tasked with eliminating the competition by beating them up then launching them out of the battlefield. If you’ve played Super Smash Bros you’ll understand the concept, but MultiVersus has some tricks up its sleeves.

The first of these tricks is the cast of characters. Instead of video game characters, MultiVersus has a roster full of pop culture icons. DC heroes like Batman and Superman can be played as, as well as classic cartoon icons like Bugs Bunny, Tom & Jerry and Shaggy. There’s plenty of more current characters to try out too, with franchises ranging from Steven Universe and Adventure to Game of Thrones. The selection of characters is absolutely baffling, and I absolutely adore it. 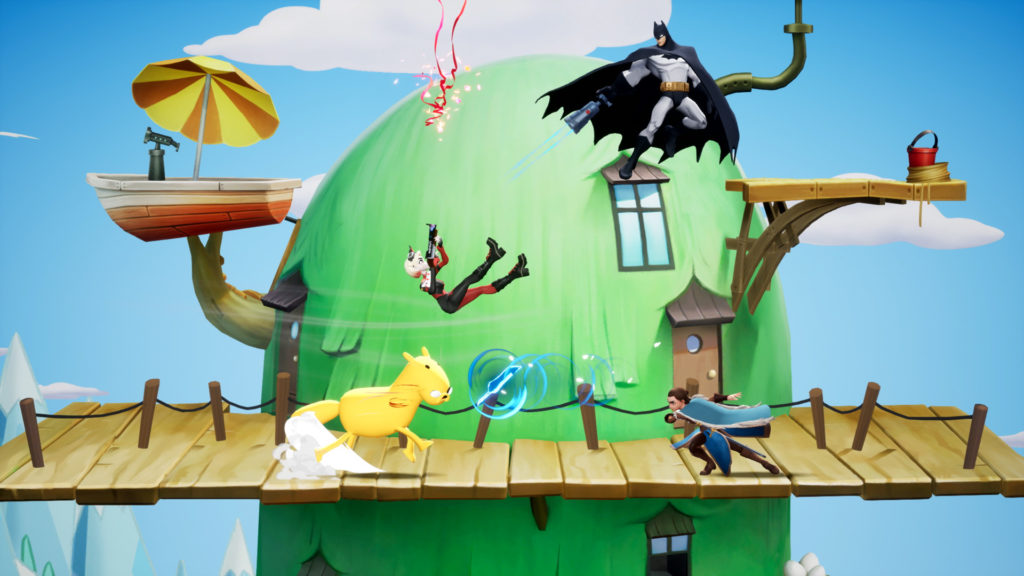 Once you’ve chosen your hero of choice, you’ll need to get accustomed to their moves. Each character has a completely different selection of abilities at their disposal, from Superman’s punches and laser eyes to Velma’s ability to lose her glasses and call the police. You’ll have to get used to your favourites’ strengths and weaknesses if you want to stand a chance online.

I could spend a lot of time talking about the ways MultiVersus is similar to the game that inspired it, but let’s focus on the differences. There’s a huge focus on dodging in MultiVersus, because as long as you time your dodges right you can weave in and out of all sorts of attacks. In the air you can dodge multiple times before even having to land, and the best players will try to anticipate this and wait for a dodge before they attack while soaring at high speed.

Because of the fact you can double jump and air dodge multiple times, a lot of the combat happens in the air. It won’t take you long to realise that chasing down opponents to give them one last punt off the edge of the screen is essential, and juggling someone who’s barely been injured off the screen feels fantastic. 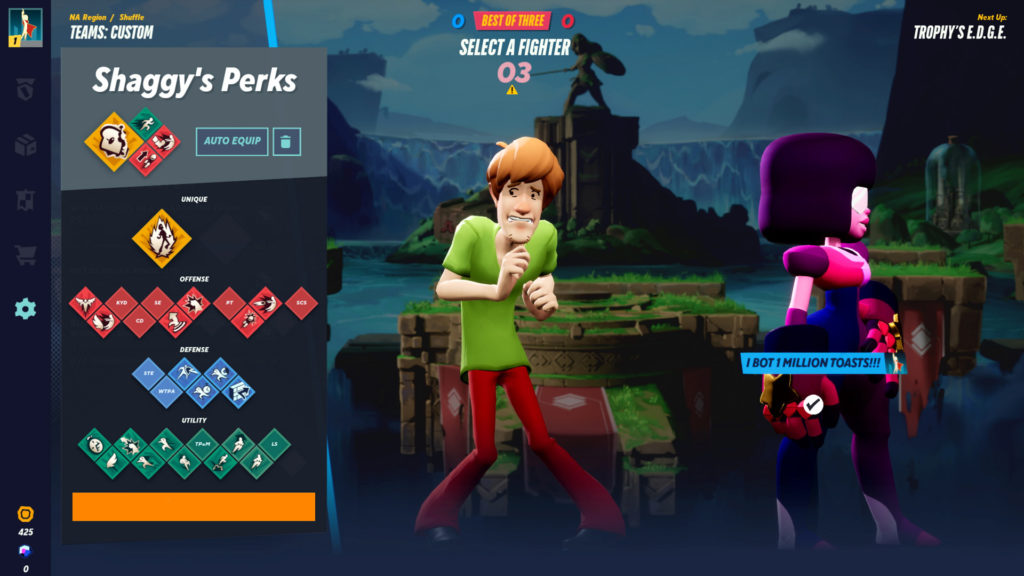 Another way MultiVersus stands out from the pack is the emphasis on teamwork. The default game mode is two vs two, and every character has an ability that can be used to help your ally. Wonder Woman can pull allies out of danger with her Lasso of Truth, Finn can upgrade their stats with buffs he buys mid match and Shaggy can heal friends his throwable sandwich passes through. Using these helpful effects can give you the edge in battle, and if you’ve got a buddy to play with you can coordinate your offence to kick ass together.

Another way you can work together is by choosing perks that compliment each other. As you play as a character they level up and unlock perks. These range from boosting certain types of attacks (ground attacks, projectile attacks etc) to reducing damage or extending your dodge. Once you pass a certain level you’ll also be able to equip any perks your ally has unlocked, and if you both pick the same one they’ll stack. It’s fun to experiment with them and see which gives you more of an edge, and it also incentivises you to level up your faves.

Out of everything though, the main reason MultiVersus has stolen all of my free time recently are the online hooks. It has daily quests to work through (which with six available a day takes a while) a battle pass to level up and an overall account level to slowly build. There are all sorts of rewards waiting if you put the time into the Battle Pass, from special effects when you get eliminated to new outfits and taunts for your fighters. If you want to have the coolest character on the battlefield you’d better get levelling it up. 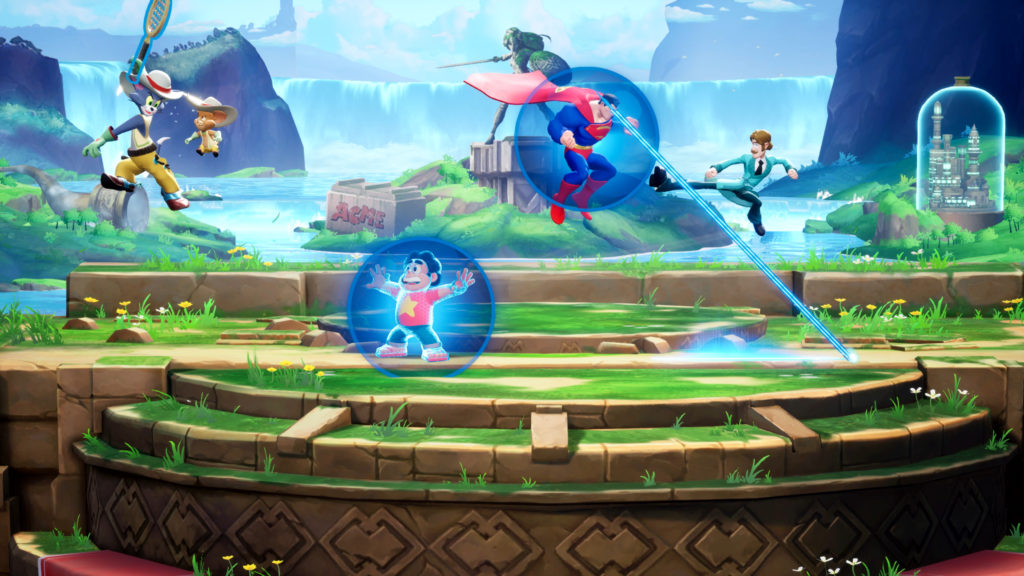 It’s worth mentioning that there are more game modes than the standard two on two battles available too. The Lab allows you to practice your moves against stationary or active bots. If you’re just looking to play online with randoms there’s 1 vs 1, 2 vs 2 and a 4 player free for all, as well as a mode where you partner up with someone to take on two bots (which is great for beginners and even grants you XP and Battle Pass points). You can also make your own custom matches with friends, or ally up with them to take on the world. The online is all pretty seamless, and will keep dragging you back for one more match.

MultiVersus is going into Open Beta on the 26th (tomorrow at the time of writing this) with the full release coming next month. There’s plenty of new content already in the pipeline that I can’t wait to try out, LeBron James is releasing when the Open Beta begins, and Rick and Morty have been announced for Season 1 in August. There are a ton of leaked characters that have been reportedly data mined too, so if you don’t mind spoiling any surprise reveals you can drool over all the future content.

It’s been a long time since a game got its hooks in me as deep as MultiVersus. The fast paced combat is enthralling, the cast of characters are delightful and the Battle Pass and character levelling bring a lovely feeling of progression. If Super Smash Bros with a faster pace and a weirder selection of characters sounds like something you’d enjoy, it’ll only cost you your time to try it out.