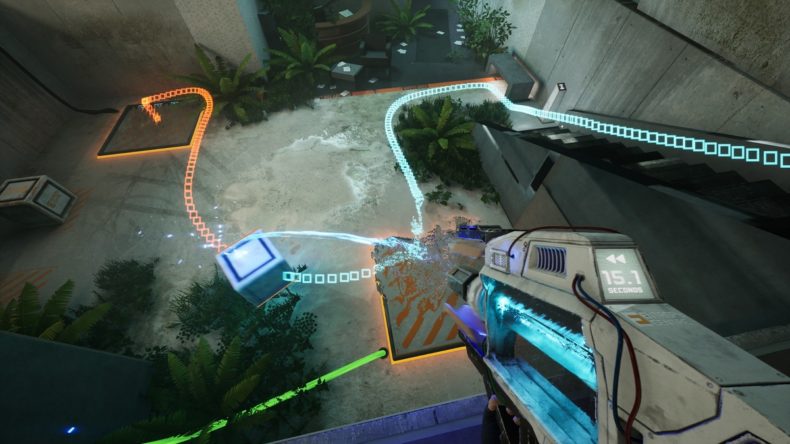 The Entropy Centre release date is something I’ve been wondering about for a while now, but I need wonder no longer, as it’s coming on November 3rd, this year.

After playing the Steam Next Fest demo of the game, The Entropy Centre release date might be during a stacked period of the year, but it’s one definitely worth trying out. You can see the first stages of the game as I played through (and messed up the recording, meaning there was no game sound) below.

As I said in my written preview, “This could be the best first-person puzzler since Portal. Yes, it’s a twist on something you know and love, but it’s the first puzzler I’ve played in a long while to get what made the games it pays homage to quite so special. You don’t even have to just take my word for it, because there’s a demo available on Steam that’ll let you try the opening portion of the game, before the full version comes to PCs and consoles later in 2022”.

Here’s the official description of The Entropy Centre:

Players join the game’s protagonist, Aria, as she awakens inside the bowels of a colossal space station—The Entropy Centre—in near-orbit of Earth. Two immediate problems face her: Earth has been set ablaze from an extinction-level event, and The Entropy Centre itself appears abandoned and on the brink of imminent collapse.

With the aid of ASTRA—a talking gun capable of moving objects backwards in time—Aria can restore the facility’s collapsed bridges, reassemble destroyed pathways, and overcome ingeniously complex puzzles to progress to the core of The Entropy Centre in the hope of surviving this seemingly doomed space station and, somehow, finding a way home.

The truth behind The Entropy Centre’s imminent collapse, and the Earth’s demise, can be found at the heart of this sprawling facility. But will Aria accept the unfortunate truth that awaits her?

Stubby Games founder Daniel Stubbington said: “It’s hard to put in words just how dizzying and exciting this journey has been. Only two years ago The Entropy Centre was merely an idea that danced through my head while I tried to sleep, and now here we are just five weeks away from the game’s official release across PC and consoles. I cannot thank fans enough for their support, and I’m delighted to see the game’s demo go live so they can get an early free taste of the game for themselves”.

The Entropy Centre will be released on PC, PlayStation 4, PlayStation 5, Xbox One, and Xbox Series X|S on Nov. 3, 2022. Check out the Steam demo, available now.