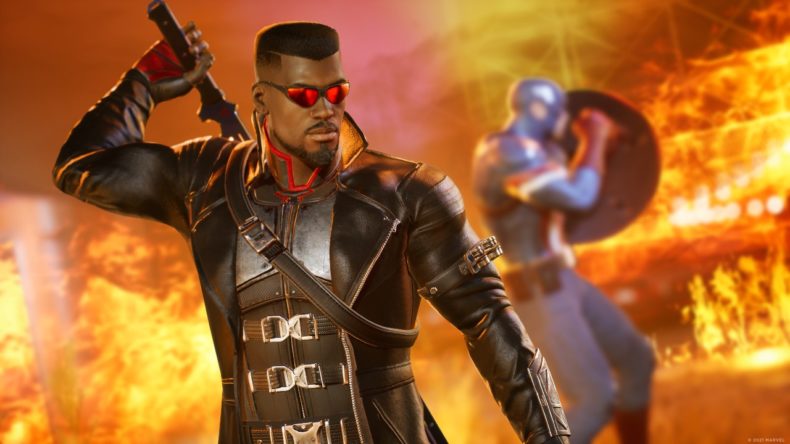 Being a superhero in the Marvel universe is as much about looking good as saving the world. Why else would anyone spend so much on spandex that’s just going to get burned, torn, stabbed, and bloodstained? If you want your heroes in Marvel’s Midnight Suns to look their best while kicking ass, you’ll want to complete the Legendary Hero Challenges and unlock their unique Midnight Suns suits. But these encounters aren’t easy, as proved by the Midnight Suns Blade Challenge.

As with the others, this challenge is uniquely centred around Blade’s play-style. He’s all about making things bleed for damage over time, and dealing high, fast damage to his weakened prey. Unsurprisingly, his Challenge focuses on his unique Bleed mechanic. 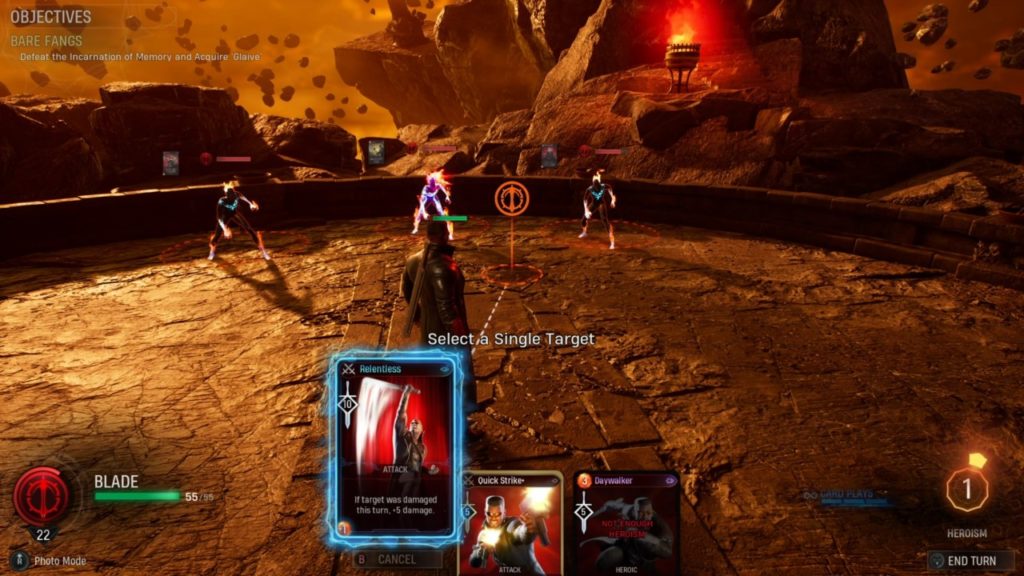 You’ll find yourself facing off against three enemies: two normal Whisper of Memories flanking a stronger Incarnation of Memory in the middle. You have to beat the Incarnation to complete the challenge, but you’ll need to apply multiple stacks of Bleed to do so. As usual there are no moves or Redraws available. The Whisper on the right carries a Make it Bleed card, while the one on the left has a Reaper card. These are vital to your success. 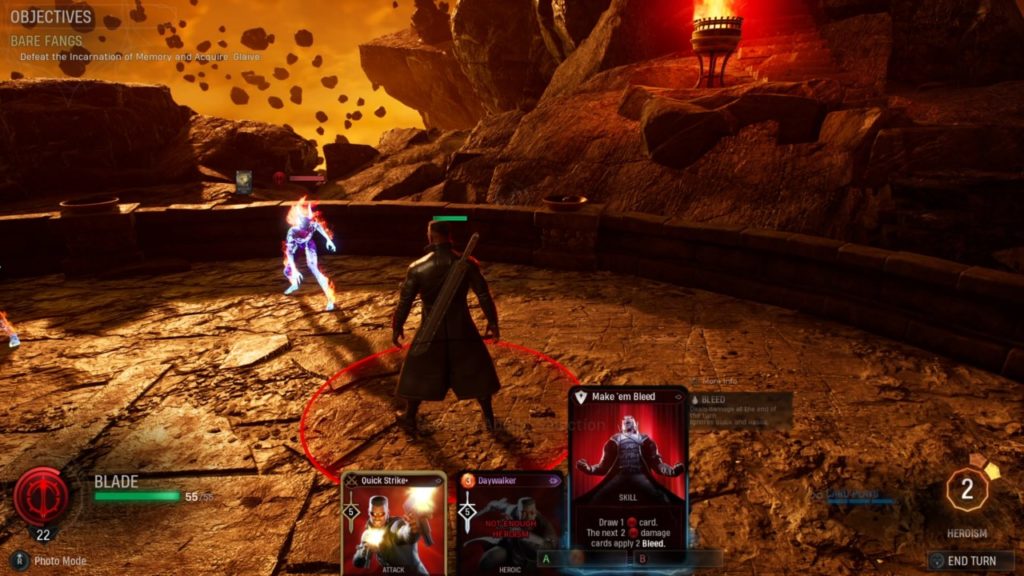 In your hand you have two Quick Strikes, one Relentless, one Strike, and a Daywalker. Start by using Quick Strike on the right-hand Whisper. Follow it up with Relentless, and the enemy will die and give you Make it Bleed. Use it right away, so the next two attacks you land will apply stacks of Bleed. 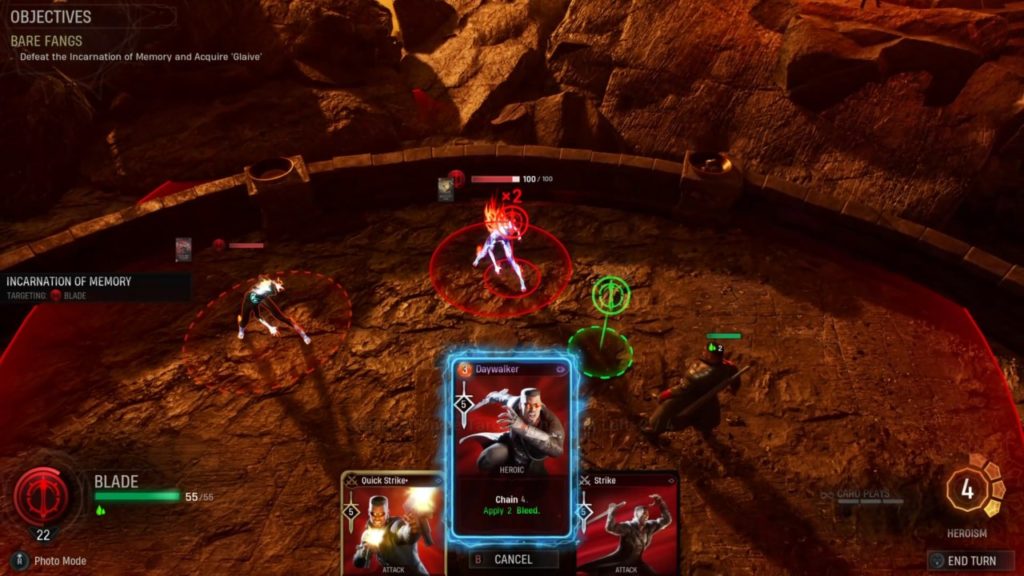 This Challenge is cheeky, as it relies on a hidden mechanic that the game doesn’t make entirely clear. See, Daywalker can chain four times, and each one will apply a stack of Bleed, even though the card only tells you it will apply two stacks. Uses all four Daywalker chains on the Incarnation of Memory. 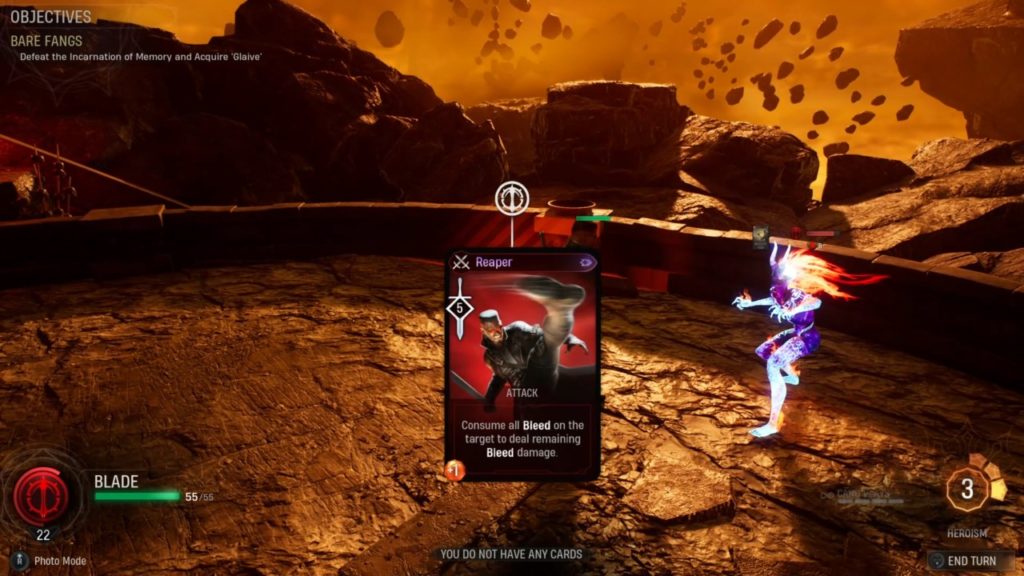 Now use both chains of Strike on the left-hand Whisper, followed up with Quick Strike. It will die and you’ll get the Reaper card, which consumes all Bleed on a target and converts it to extra damage. Use Reaper on the Incarnation to do massive damage and destroy it. You’ll receive the Glaive card for your trouble.

Use Glaive on the crystal to complete the challenge. For a more detailed demonstration, check out the video below.

So there you go, that’s how you complete the Midnight Suns Blade Challenge. We hope this guide helped, and you’ll have a look at the other guides and the review on Godisageek.com.

Senior Content Editor Mick has been playing games for over 30 years and writing about them for around 12. After drifting from site to site for a while, settling briefly at the now-defunct Made2Game and freelancing for the gone-but-not-forgotten NintendoGamer Magazine, he came at last to rest at Godisageek. Mick has been a reviewer, staff writer and content editor here for some time, while also moonlighting a little for Red Bull Games. He has 4 kids, has written 2 novels, and sometimes even manages to pay a bill or two. You'll usually find him defending the galaxy in Destiny 2, battling evil in Diablo 3, or lurking in the background on Twitter. Find him there @Jedi_Beats_Tank, or on XBL (JediWaster247), PSN (Jedi_Waster) or Nintendo (JediWaster).
MORE LIKE THIS
GuidesHintsmarvelMarvel's Midnight Suns