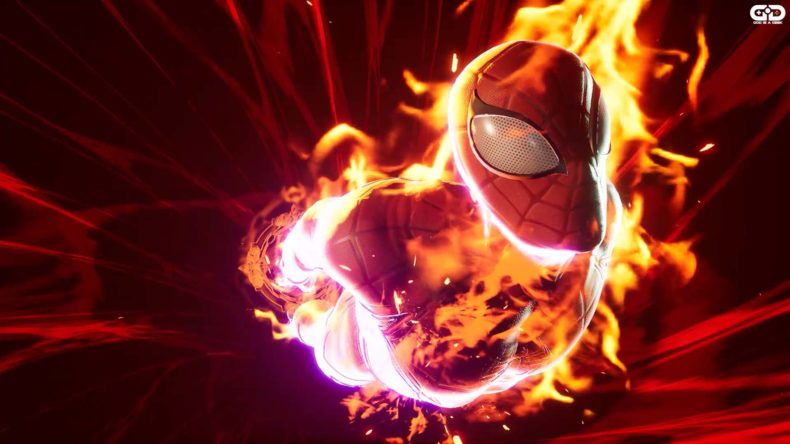 Marvel’s Midnight Suns Spider-Man challenge is one of the easier challenges to complete in order to get Spider-Man’s ultimate legendary ability and armour set, but even then, it’s only easy if you’re really used to using the hero all the time. His challenge is, at first, a lot harder because it involves movement much more than it does attacking. There are few enemies to even take out, but it’s complicated to start with.

To start with you’ll need to use the “Opportunist” card to get two moves to get you going, but also it will mean that they cost 0 heroism. With only two cards to use that may not seem important, but it’s vital, so use that card first. 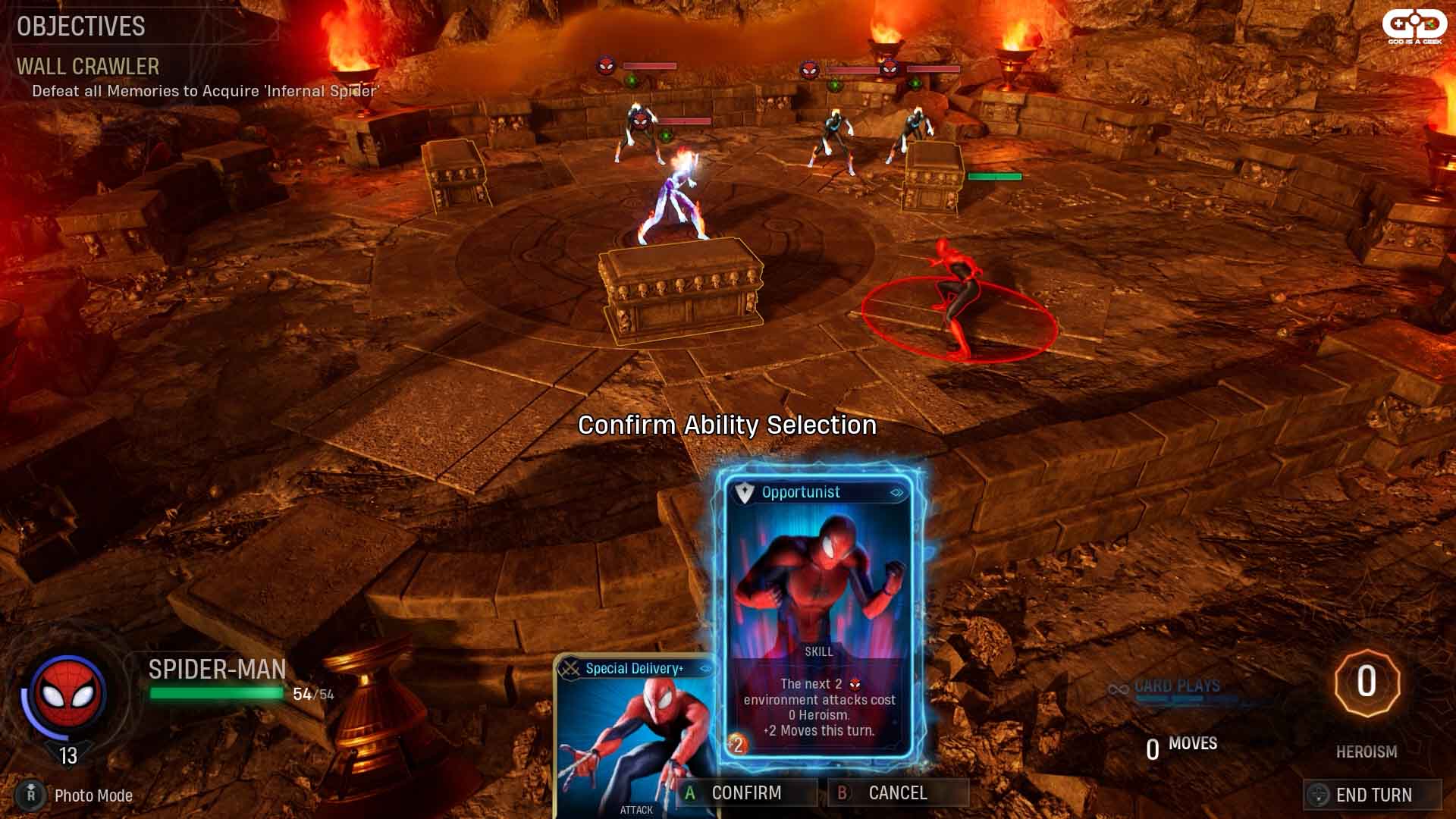 Now you’ve just got one card, it’s time to focus on movement. Use your first move to get opposite the “main” or shall we say, stronger enemy. As you position Spider-Man you’ll see a green line showing potentially where you can kick the obstacle, Line it up below, then kick it at the flame-haired enemy. 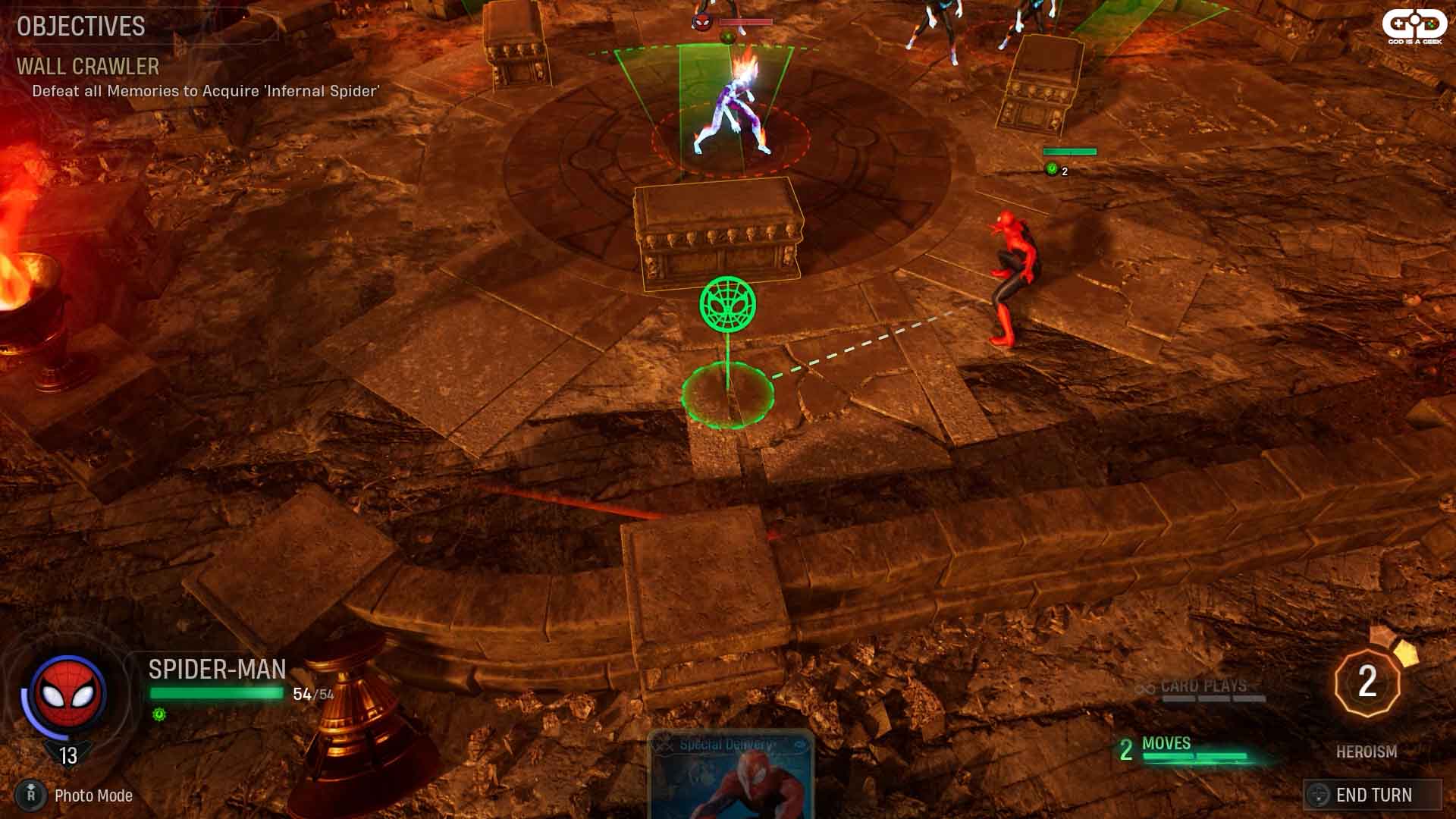 As you can see from the image, this will damage the main target but also take out the enemy behind him. 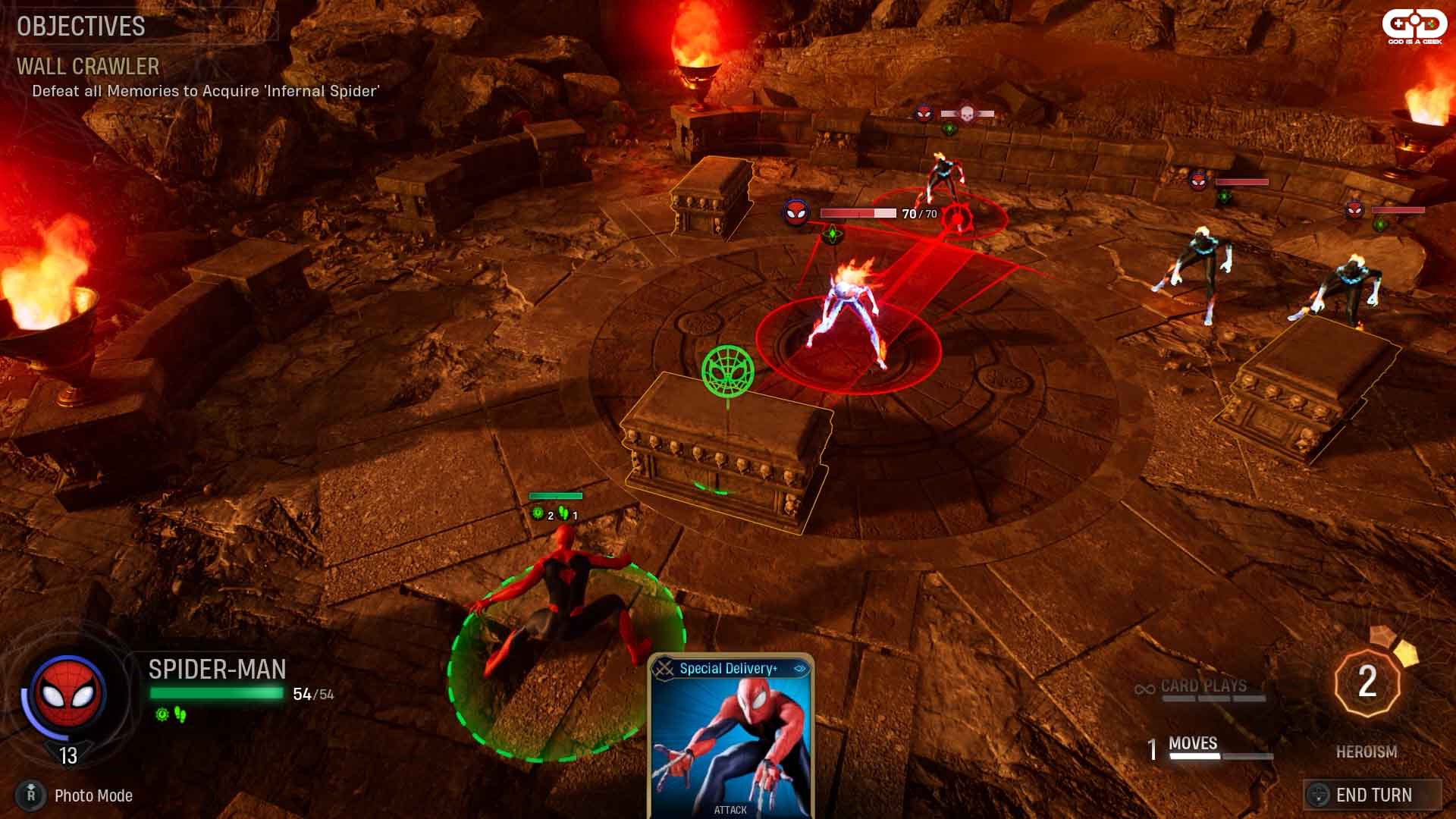 Once again, don’t touch your cards, and move to behind the obstacle closest to the flame-headed foe. Make sure you use the green line to get the target lined up ahead of time. This move is awkward as it’s very close to the edge of the arena, but it’s definitely doable, as per our image. This kick through and it’ll knock the main foe into the other one. 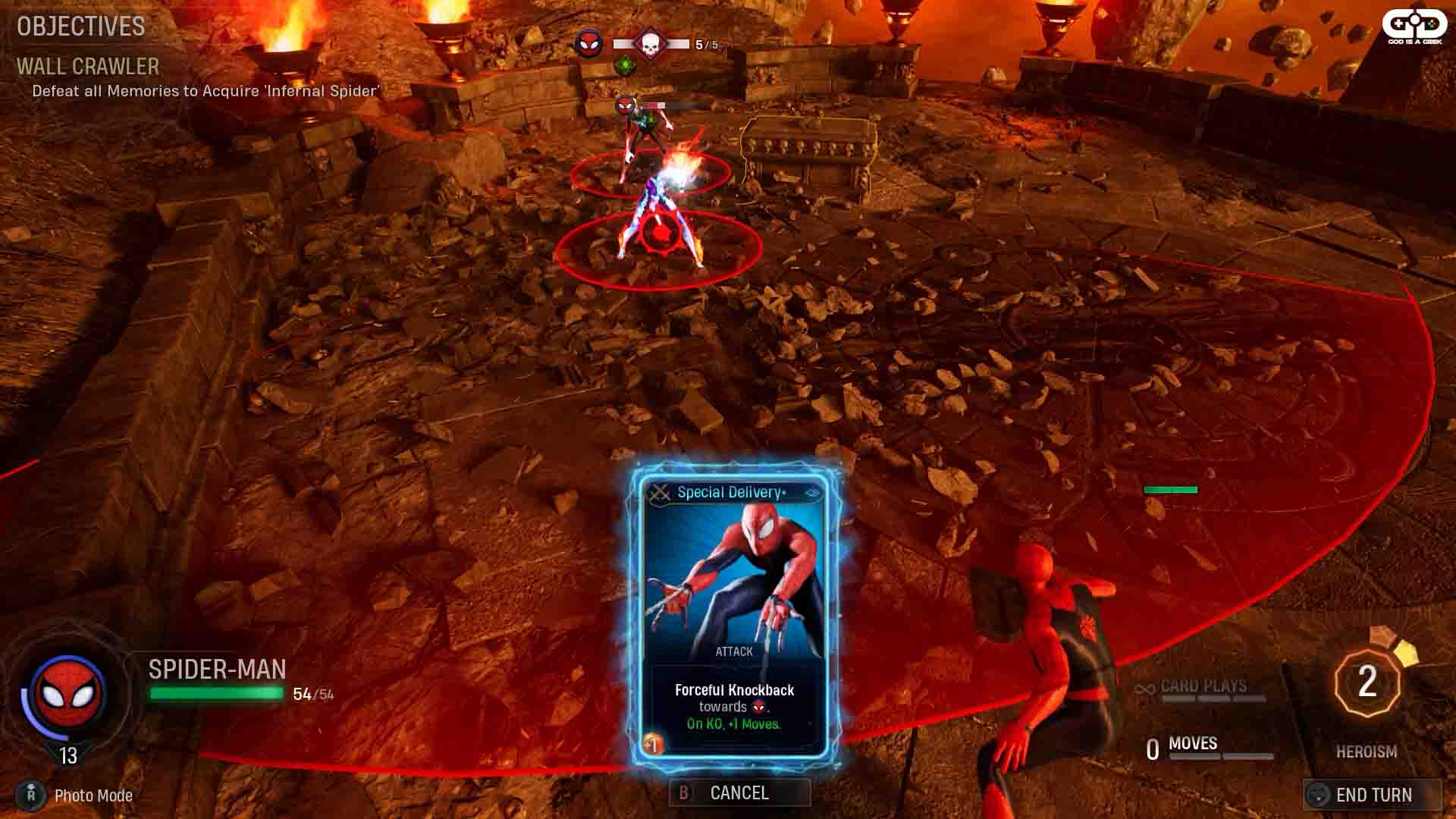 This leaves you with 0 moves, one card, and two enemies to defeat. Use “Special Delivery” to target the weaker enemy at the back of the two. Make use of the forceful knockback towards Spider-Man, and it’ll kill the weak foe, and damage the tank-like enemy. Don’t panic, you will get the last move because you get a “KO” on the weaker enemy. 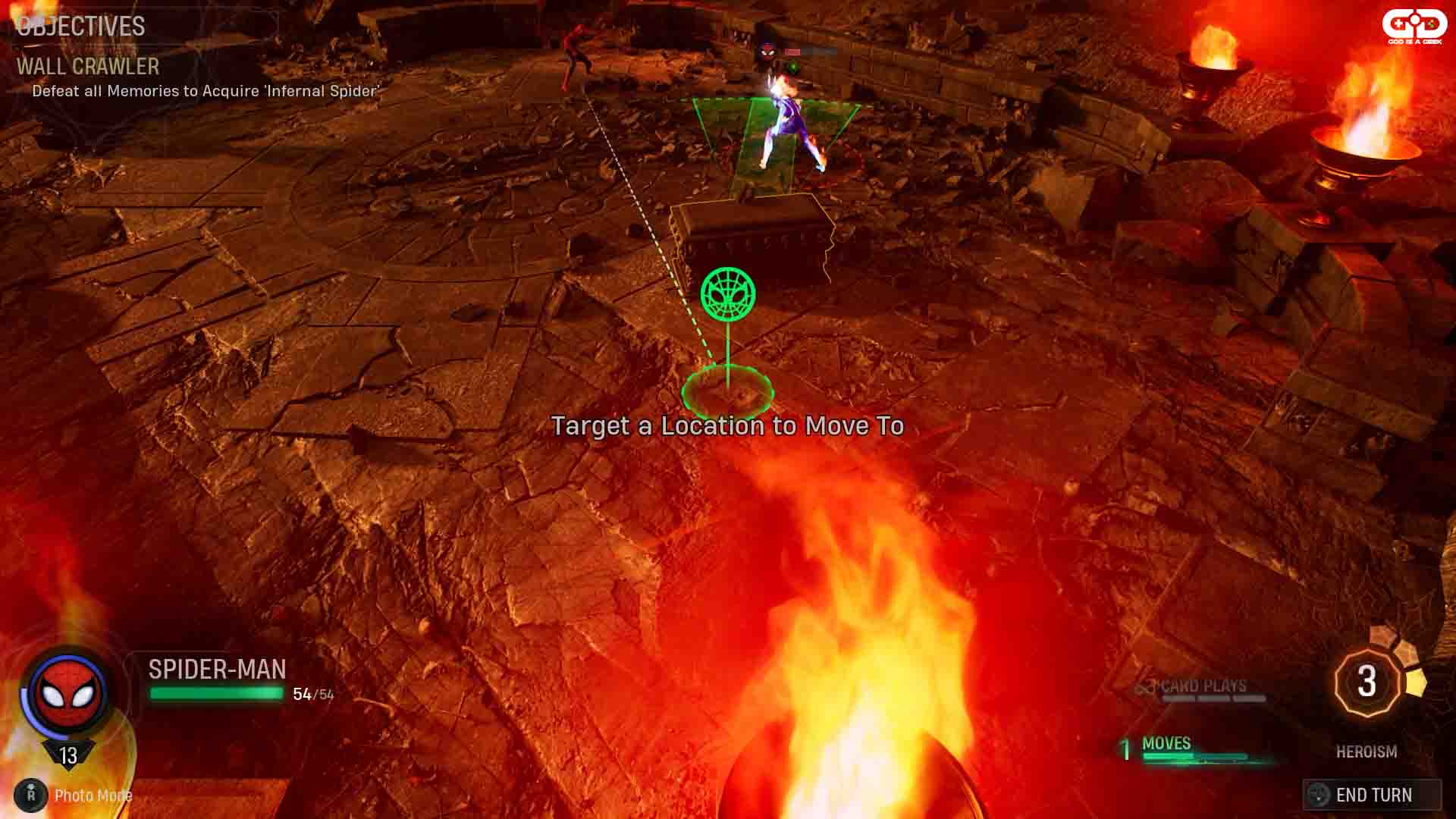 All you have left now is the move you just got from that last action. Move to behind the last coffin-like object, again using the green marker to ensure you’re positioning yourself right to complete the Midnight Suns Spider-Man challenge. 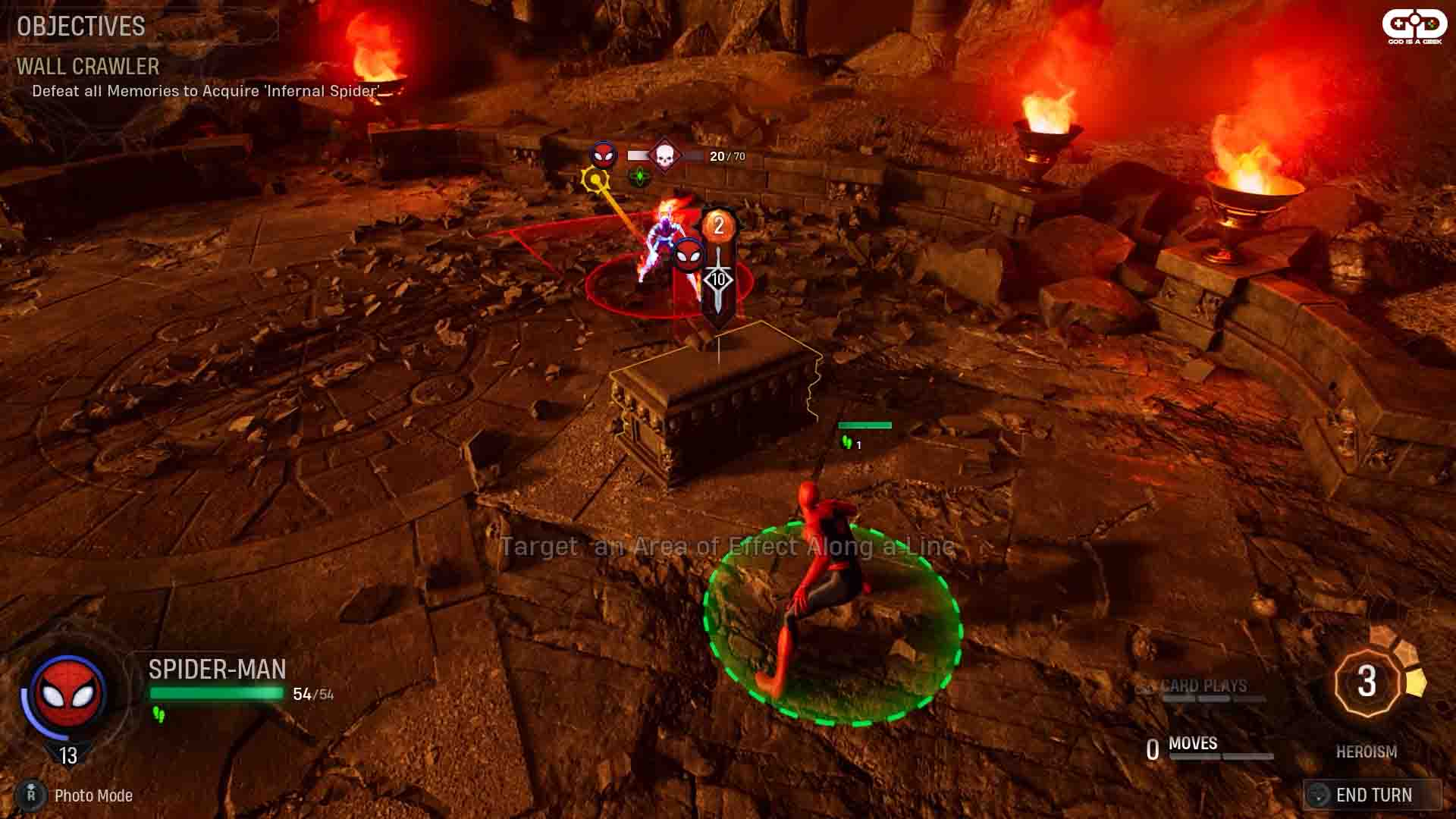 Use the heroism you have left to kick the coffin into the bad-dude, and you’ll get the “Infernal Spider” card. Just in case you need it, use the remaining cards in this order to complete the challenge: Up Here! > Chain Strike > Chain Strike.

Congratulations, you’ve beaten the Midnight Suns Spider-Man challenge, but just in case you need more help, watch the video below for the solution in action.