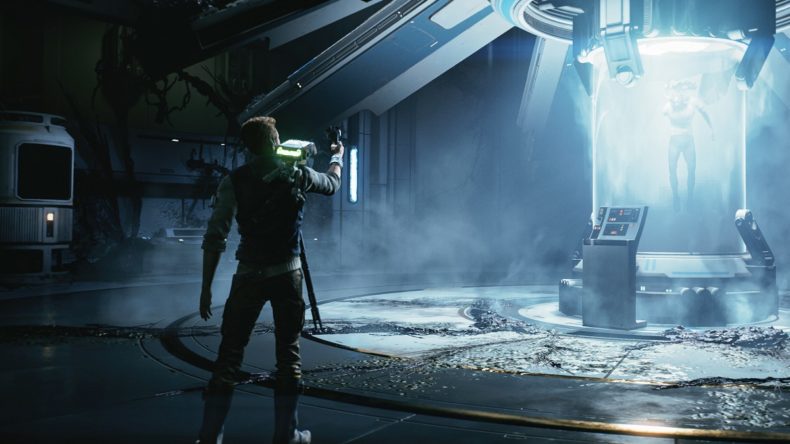 EA and Respawn has announced that Star Wars Jedi: Survivor has a release date of March 17, 2023, continuing Cal’s journey to extinguish the Empire. To coincide with the announcement, a brand new trailer was released at last night’s Game Awards, showing off what fans can expect from the anticipated sequel.

Star Wars Jedi: Survivor picks up five years after the events of Star Wars Jedi: Fallen Order, as Cal continues to grow as a Jedi and evade the Empire’s constant pursuit. With trusty companion BD-1 by his side, he joins forces with new and old allies to aid him on his quest, including the mercenary Bode Akuna (Noshir Dalal) and former crew member Cere Junda (Debra Wilson). With new traversal options such as an ascension cable to reach new heights and the ability to tame and ride creatures, Cal has many ways to navigate the perils he will face as he explores both familiar and new worlds across the galaxy.

The trailer looks pretty damn impressive, showing off new skills and the ability to use various creatures to get around. In the description below the video on YouTube, it says the following:

Continue Cal’s Journey – No longer a Padawan, Cal has come into his own and grown into a powerful Jedi Knight. The Dark Times are closing in – with enemies new and familiar surrounding him, Cal will need to decide how far he’s willing to go to save those closest to him.

Go Beyond Your Training – The cinematic combat system returns with additional Force abilities and new lightsaber fighting styles. Creatively leverage all these abilities and weapons to strategically take on an expanded host of enemies, sizing up strengths and weaknesses while cleverly utilizing your training to overcome your opponents and solve the mysteries that lay in your path.

Explore an Untamed Galaxy – Discover new planets and familiar frontiers in the Star Wars galaxy, each with unique biomes, challenges, and enemies. Master new skills, equipment, and abilities that will augment the ways you explore, fight, and roam.

Video games are cool. Don't let anybody tell you any different.
MORE LIKE THIS
EArelease dateRespawnStar Wars Jedi: Survivor