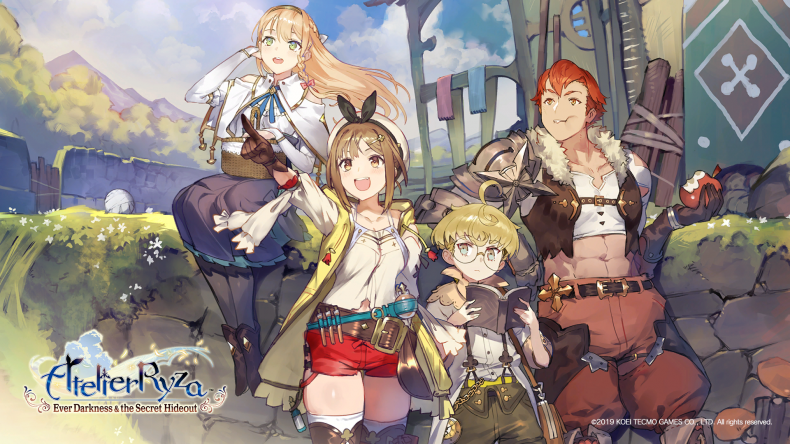 Atelier Ryza: Ever Darkness & the Secret Hideout is something I was cautiously optimistic about when it was originally announced for a few reasons. With Gust, you can never be sure these days because there are some great games coming out of them but also some… not so great ones. Games like Nights of Azure had a ton of potential and despite enjoying it a lot, I was hopeful for the sequel. Nights of Azure 2 was a disappointment. With Atelier Ryza: Ever Darkness & the Secret Hideout, Gust has not only raised the bar for the Atelier series but has also shown how a smaller studio can bring out a JRPG on three platforms at the same time and mostly deliver a quality experience.

So far, whenever someone has asked me how to get into the Atelier series, the answer has always been Atelier Sophie. That changes with Atelier Ryza for multiple reasons. Not only is this a reboot more or less for the Atelier series but it is also one that manages to retain almost everything fans love about the series and build on that base with various quality of life improvements and enhancements to core gameplay systems ranging from combat to synthesis. Atelier Ryza is a coming of age story featuring Ryza and two of her friends who are looking for adventure. Ryza is a farmer’s daughter who is tired of her life and wants to do something exciting. Her initial interactions with her parents at the farm are pretty hilarious. Ryza ends up going to a new island thanks to an abandoned boat and this is where her journey to become an alchemist begins. Seeing alchemy in action was the catalyst for Ryza basically. I know a lot of people are interested in this game because of Ryza’s character design and while that is a fine reason to check out the Atelier series, this franchise isn’t like your usual fan service focussed JRPG. It is always a relaxing story that never takes itself too seriously. The focus on characters rather than some grand story feels more apparent here than other Atelier games as well. I’m looking forward to trying out some of the post launch story content as well.

Combat in Atelier Ryza drops the traditional turn based combat most fans of Atelier know and love for an Active Time Battle system. This will be familiar to fans of Final Fantasy. Instead of getting as much time as you want to select skills in a menu like Dragon Quest, each character has their turns come up and you have to decide what to do right there. Time doesn’t stop when you’re selecting commands like in earlier games. This makes combat much more fast paced and the implementation is very good with various additions. All party members share a pool of action points which are used to perform skills. You can switch between party members while the others will be AI controlled and can choose who to target when it comes to the enemies. Your AI can be instructed with being aggressive and using skills or just attacking in what the game calls “negative mode”. Even the tutorial battles are a blast with this combat system. My only complaint here is the way buttons are assigned causing you to press square to initiate combat by attacking an enemy in the field and then pressing circle to attack and then X to progress. All of this should’ve been mapped to a single button for getting in and out of encounters quickly.

Alchemy is changed up quite a bit in Atelier Ryza. You now have a sphere grid like interface where you add your items and then get options to move to different nodes to level up certain things or add other skills. This is probably the best change to alchemy for the series. The game does a great job of steadily introducing new mechanics to this so you aren’t bored or overwhelmed. I hope this system sticks for the next game. On PS4 Pro, Atelier Ryza is gorgeous. This is the first game in years where Gust has nailed the fairytale like aesthetic and feel of the earlier games in a full modern environment with free camera movement. The world looks great and you will spend a good amount of time taking screenshots with the sky, tower mills, and more. Character models also look great. This game has seen a lot of care put into designs for sure. The visuals sadly aren’t perfect. While I didn’t run into this issue on the Switch version, the PS4 Pro has noticeable shimmering for grass. This is similar to the issue in Dragon Quest XI on PS4 Pro. There’s also a distinct lack of anti-aliasing in certain parts that really sticks out.

Over the last few releases, Gust has been keeping the frame rate more or less the same across PS4, PS4 Pro, and Nintendo Switch when it comes to targets at least. Atelier Firis was the last Atelier on PS4 to offer a frame rate higher than 30fps while it struggled on base PS4.

Barring visual issues, movement has some problems. When you’re trying to gather from various locations around your house, there are situations where you’re at a ledge that’s probably a foot high but you can’t jump ahead. You need to go around. Invisible walls are very common here and they are annoying. Hopefully the next game will let you at least get off small ledges. If you’ve been away from the series for a while, you will be disappointed to know that Atelier Ryza has only Japanese voice acting. Most people have accepted this but it is annoying that Koei Tecmo still doesn’t subtitle everything. Some spoken dialogue during synthesis or combat isn’t subtitled. I mentioned the fairytale aesthetic and the soundtrack here complements that brilliantly. Everything from the town music that changes depending on the time of day to the basic battle music is excellent. Gust rarely disappoints with music and Ryza is one of their best soundtracks till date.

Atelier Ryza: Ever Darkness & the Secret Hideout is the best entry point for newcomers to the Atelier series. It doesn’t overstay its welcome and it does so while looking and sounding excellent almost throughout. Gust should treat this as a solid base to build on for future entries because this shakeup is definitely what the series needed. I hope more people end up getting into Gust’s amazing JRPG franchise with Atelier Ryza.

Shimmering issues
Some traversal could be better

Atelier Ryza: Ever Darkness & the Secret Hideout is the best entry point for newcomers to the Atelier series.

You may also like
atelier ryzaatelier ryza: ever darkness & the secret hideoutPC