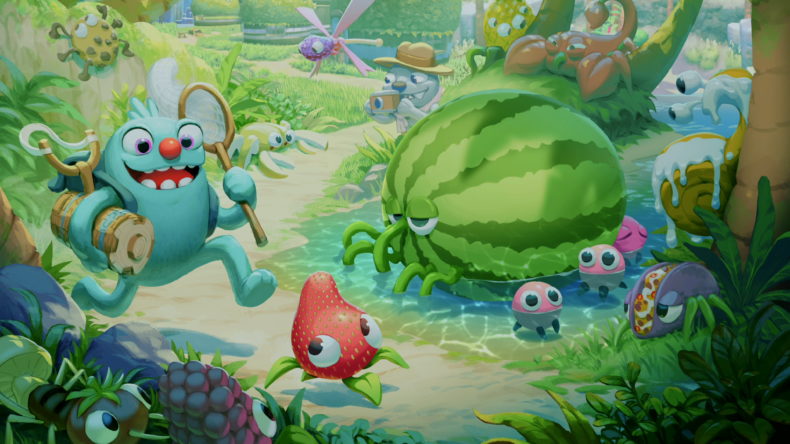 You get to watch some great kid’s films as a parent. There’s one that sprung to mind the moment I saw the trailer for Bugsnax, and that was Cloudy with a Chance of Meatballs 2 – a story set around an inventor travelling to an island filled with animal-food hybrids. Of course, they are both very different when it comes to their story, but a comparison I couldn’t help make. From my first steps on the island of Snaktooth, I couldn’t help but feel that Bugsnax was going to be something very special.

You play a reporter who has been been invited to the island by an explorer called Elizabert Megafig. Once you arrive, it is clear things aren’t what they are supposed to be, and with Lizbert missing and Snaktooth overrun by snacks resembling food, you’ve got quite the adventure on your hands. It’s such a charming environment filled with colourful characters and a wide variety of bugsnax – the name given to these critters – that every new area is filled with new opportunities and challenges.

Your main goal in Bugsnax is to reunite the empty town of Snaxburg, led by Filbo, the mayor. He’s a bit of a mess since Lizbert went missing, and all he wants to do is see his friends come home. This sets you off on an adventure across the various biomes of Snaktooth, from Sugarpine Woods to Sizzling Springs, searching for the grumpuses who have abandoned the town. These furry people all have stories to tell, whether that’s about their feelings to one another or their love of bugsnax. 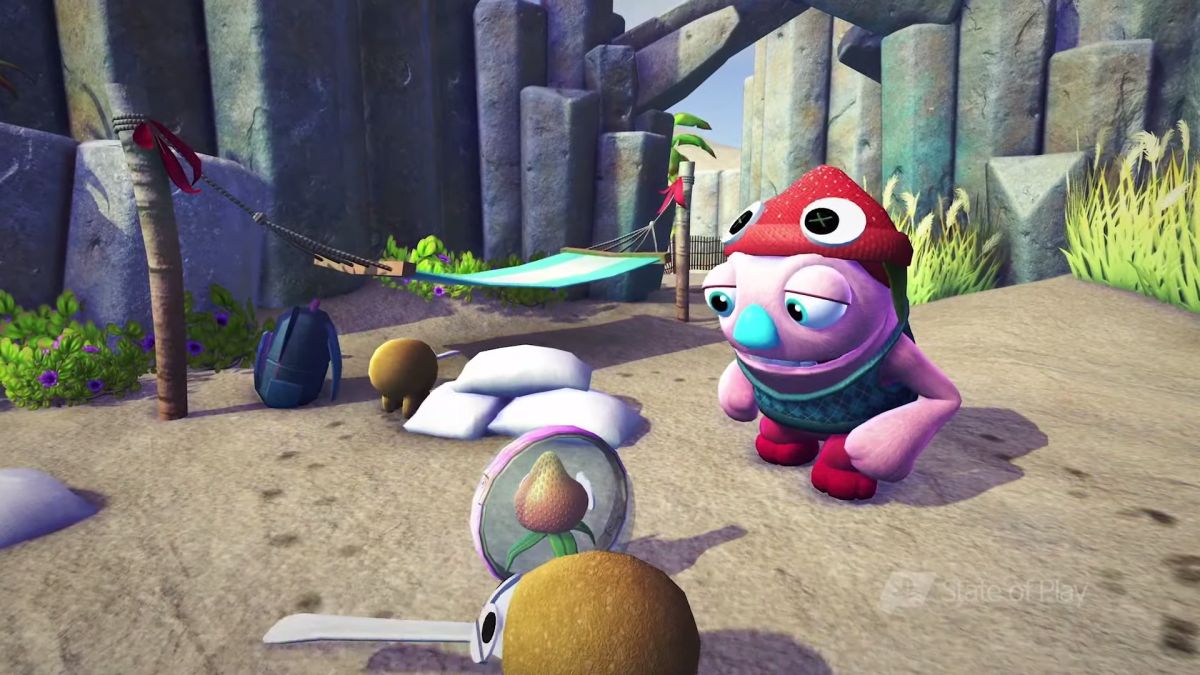 Chandlo is a surfer dude who has big muscles and a bigger heart, Beffica is a prissy teenager who thinks quite a lot of herself, and Wampus is a farmer who is looking for the love of his life, Triffany. There are twelve grumpuses in total, and getting them to move back to Snaxburg requires you to complete certain tasks for them, mostly revolving around catching bugsnax and feeding the poor little buggers to them. You’ll unlock plenty of tools to help you along your way, starting with a journal that keeps tons of information in it.

The Grumpedia lists all the grumpuses you encounter, with important information such as who they like and who they hate, what they do on the island, and their thoughts on what happened to Lizbert. This fills up after you interview them once they are back at Snaxburg, helping to paint a picture of the intrepid explorer, and often granting you a key or a document to help you find her. Another important section of the journal includes the Bugapedia. Much like the Pokédex from the Pokémon series, it details every bugnax you catch, including info on where you can find them, how to catch them, and what they like and dislike. 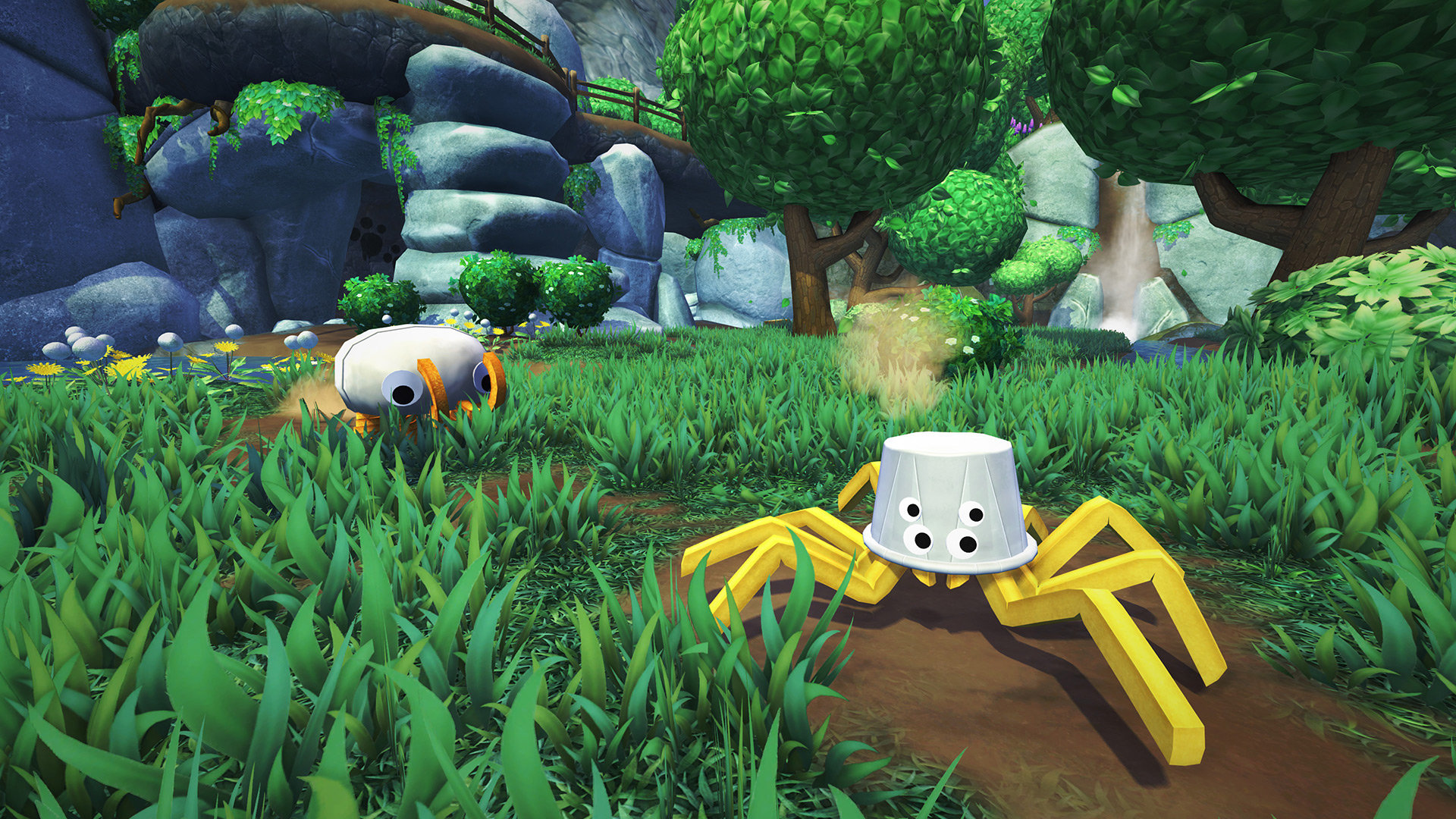 You’ll get hooked on catching them and filling up your Bugapedia, with every new entry a badge of honour you wear proudly. You’ll also find your quests, items, tools, and map in the journal. Everything you could ever need to succeed will be found in there, and you’ll often find yourself flicking through the pages to solve the overarching mystery of Lizbert’s disappearance. One small concern I had at first was the lack of waypoints or markers on the map. It was a bit of a struggle at first getting used to where I needed to go, but after a few hours the island of Snaktooth becomes more of a home, making you feel more familiar with where you are and where you need to go.

The best thing about Bugsnax is the gameplay. There are no health or stamina bars. You can’t die or run out of the fundamentals needed to get from A to B. This allows you to be creative with the tools on offer when catching the large amount of bugsnax littered throughout Snaktooth. Scanning bugnax shows their movement, allowing you to drop your SnakTrap in their way. Critters such as the Flutterjam fly around in the air, so you can use a launchpad to send your trap into the air to attempt a catch, but it can also be used to launch yourself up to unreachable platforms.

Over time you’ll unlock new equipment such as the Trip Shot, a vital piece of equipment that trips up faster bugsnax, and it can even conduct fire and ice to stop those weakened by specific elements. There’s also a Snakgrappler which can pull bugsnax towards you. Being creative provides the best kind of results, and relying on the way bugsnax react in their own natural habitats can help. Spuddy’s charge if provoked, and if another bugsnax gets in their way, they can be knocked over and caught in your Bug Net for a quick catch. I adored coming up with ways to catch the bugsnax, and it showcased just how diverse the amount of opportunities Young Horses has put into the game to give you a great sense of exploration and satisfaction.

What really struck me about Bugsnax is the story. It’s surprisingly deep whilst still peppered with humour and sweetness. Finding out about the grumpuses and their backstories brings the entire narrative together, and allows you as a player to feel a part of something bigger. As the game reaches its climax, you don’t want it to end. Everything you’ve been through, all the people you’ve met, and the fun you’ve had leaves you wanting more. I hope this is just the first game of many because I adored everything about it.

Bugsnax offers thrilling gameplay with a poignant story about community and hope that continues to keep you engrossed throughout. The hundreds of bugsnax are well-designed and different, allowing you to come up with various ways to catch them. It looks gorgeous, both in the island and the grumpuses you meet, with a fantastic voice cast where no-one outperforms anyone else. Bugnax is a brilliant albeit short adventure filled with warmth, and I will definitely be playing it again very soon.

A bit short
No way points or markers

Bugsnax offers thrilling gameplay with a poignant story about community and hope that continues to keep you engrossed throughout. The plethora of bugsnax are well-designed and different, allowing you to come up with various ways to catch them. and the colourful island of Snaktooth is a lot of fun to explore.