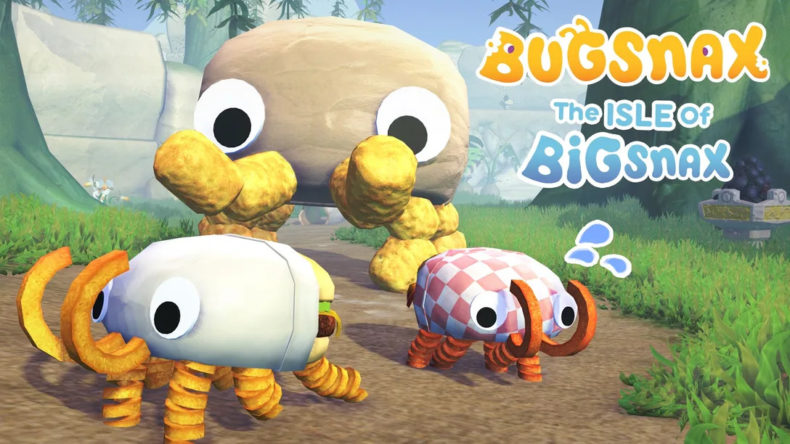 In June of 2020, we were first introduced to the wacky world of Bugsnax by way of a musical trailer. When the PS5 launched at the end of that year, future Bunger fans had access to the snack-filled world as one of their PS+ games for that month. Since then I’m sure we’ve all played plenty of different and exciting games on our shiny new (ish) consoles, but many of us now have a Bugsnak shaped hole in our heart. Well now we can fill that hole thanks to the Isle of Bigsnax.

Now towards the end of Bugsnax (as long as you’ve beaten a shed load of side quests) resident conspiracy theorist Snorpy Fizzlebean will be hanging around camp with some shocking seismic activity to report. After heading down to the beach it becomes pretty obvious what caused that earthquake, a massive island has emerged from the ocean. You and four of the villagers decide to sail over to investigate this new chunk of rock, which you may have guessed is home to some big edible beasties.

As it so often is in Bugsnax, the Isle of Bigsnax is an open area full of snack animal hybrids to capture. The difference this time around though is that they are massive. Too big for any of your traps to work on in fact, so you’ll need to employ a new tactic. Fortunately the ancient inhabitants of the island knew how to make this food source more manageable, Shrink Spice. By throwing a vase of this magical substance at a vast Snak, you’ll (surprise) shrink it down to a more manageable size. 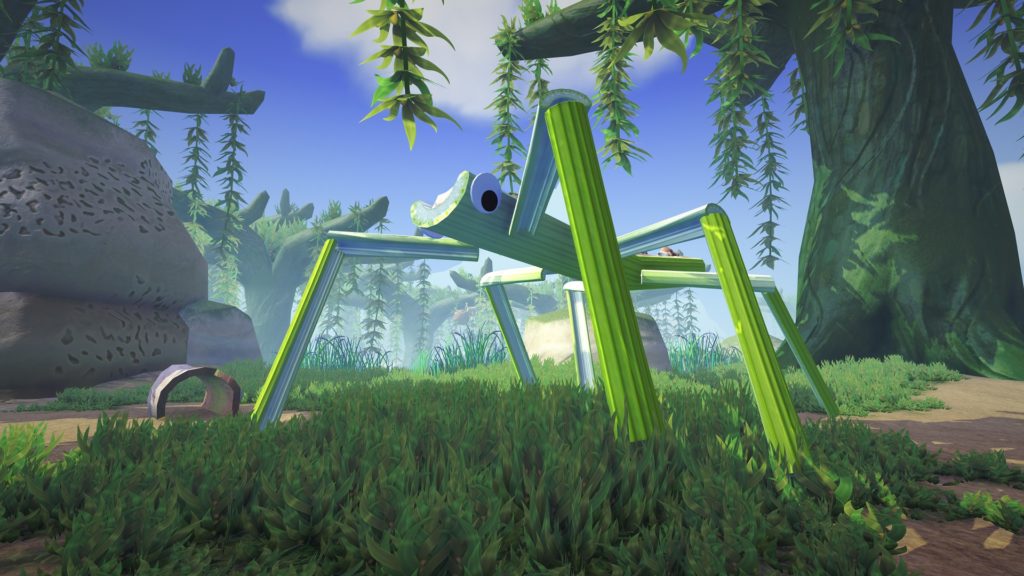 This means that to capture pretty much anything on the island you’ll need to be near one of the altars where Shrink Spice is located. The island is easily the biggest single area in the game, so carrying the Spice (which can only be carried for thirty seconds before exploding) from one end of it to the other isn’t possible. There are plenty of altars hidden around the island though, and with a bit of puzzle solving you’ll be able to access them.

Isle of Bigsnax is home to loads more puzzles than the main game. The focus on experimenting with different gadgets to capture critters is gone, and instead you’ll spend your time trying to open various locked doors. Some of these doors require you to light torches by using your Tripwire as a lighter, and others are mazes to guide your ball through. These are interesting at first, but I’d rather just stick to the snack gathering.

The new Bugsnaks do have fantastic designs though. First you’ll meet the jumbo version of the fan favourite Bunga, but after that it’s all new food friends. From massive lobsters made of pasta to a celery stick insect, every single one of them made me smile. You bring all your previous traps and tools with you to the island, so capturing them involves the same steps you mastered in the main game – albeit with the need to throw a few jars about. 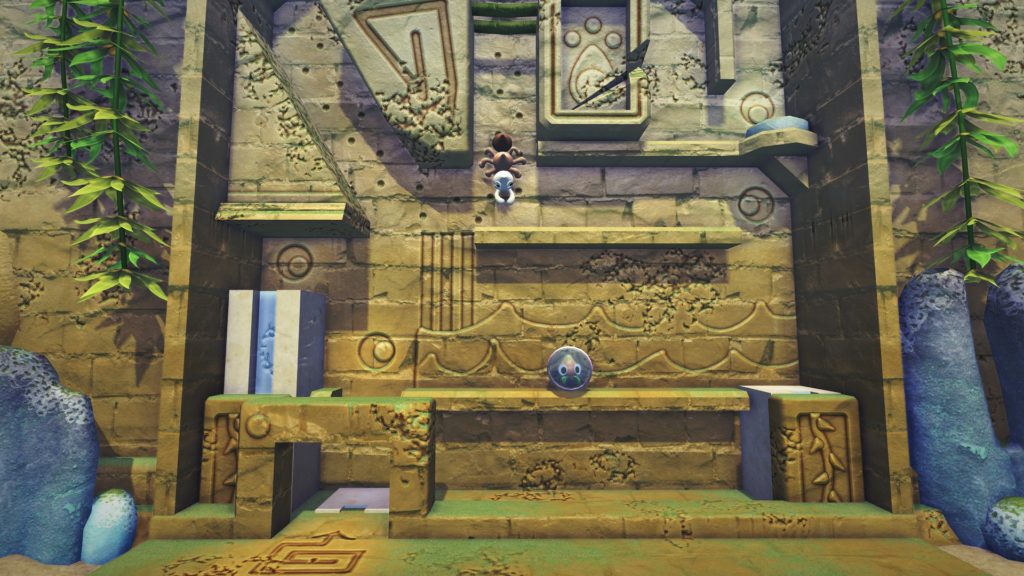 Similarly to the rest of the game, the Isle of Bigsnax is full of the work of ancient civilisations. There are ruins to investigate and plenty of secrets to uncover, and anyone who remembers how the original game ended will find plenty of warning signs on this beefy side quest. As well as affecting the overall narrative of Bugsnax, you’ll also find out much more about the Grumpus’ that join you on your mission – especially as the cast is much smaller.

There isn’t a lot more to say about this bonus content really. It’s over before it really has a chance to get going, with a runtime of only a couple of hours even if you collect every single Snak. It’s a nice addition to the game, but if you’re coming back just to check out the new stuff don’t expect to stick around for long. I also experienced the most technical issues on Switch while in the new area (especially towards the end of the content) but there’s a patch that should hopefully stabilise this before launch.

The Isle of Bigsnax provides a few exciting new Bugsnax to capture, but it loses some of the charm of the main game by focusing more on door puzzles. If you’re playing through the game for the first time you’ll enjoy sailing over for a distraction from the campaign, but returning Snakkers will be finished before they know it.

The new massive Bugsnax are as charming as ever, but the Isle of Bigsnax is over before you know it.