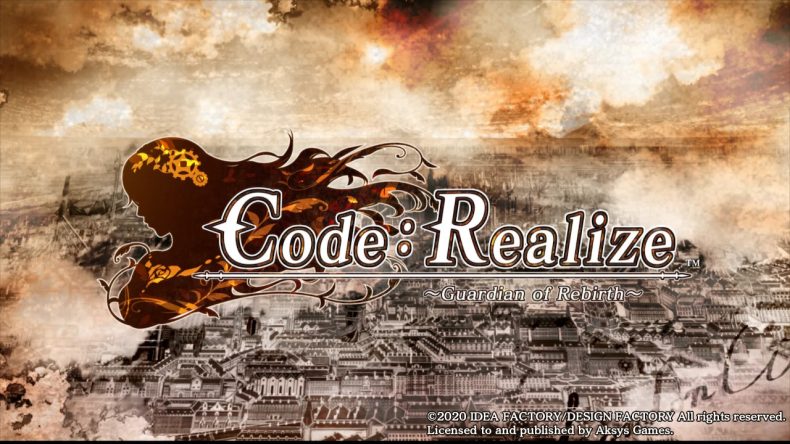 Code: Realize – Guardian of Rebirth is a game that introduced many console visual novel fans to the otome genre. If you’ve never played an otome game before, the genre is targeted at a female audience. Structurally, this visual novel sub-genre usually involves you playing as a woman who has multiple potential paths with romantic interests in the game. The way the paths unfold and how the story progresses to multiple endings is always interesting in a good otome visual novel. In the last few years, the PS Vita has been home to the best localised otome releases and it is good to see the first of many great otome releases finally hit the Switch in the form of Code: Realize – Guardian of Rebirth. Code: Realize – Guardian of Rebirth (stylised as Code Realize ~Guardian of Rebirth~) has you playing as Cardia, a young woman carrying a poison within her body. She can’t touch anything and is shunned by the world and called a monster, and so she sets off to find her father and discover the truth of her body. The story takes place in a steampunk setting with gorgeous artwork and excellent music. It involves various historic figures like Van Helsing, Lupin, and more. There are multiple paths Cardia can take in this story offering vastly different perspectives and endings. If you’ve never played this before and are a fan of otome games, this is definitely worth getting as it remains one of the best of the otome genre.

In terms of content, this release offers nothing over the PS Vita original. On PS4, this game was packaged alongside Code: Realize ~Future Blessings~ which is a fandisc (expansion to the original story). If you already played it on either platform before, you won’t find anything extra here. If you haven’t, the Switch release is the best way to experience this now albeit at a higher price than PS4 for the hybrid playable nature of the console. While some visual novels or adventure games sometimes struggle on Switch for whatever reason, Guardian of Rebirth ran great across the board for me. When it comes to Switch specific features, Code: Realize – Guardian of Rebirth has full touchscreen support. You can also play using traditional button controls as well and the game scales up well on the big screen when docked. The Nintendo Switch version of Code: Realize – Guardian of Rebirth is the definitive version of Otomate’s classic visual novel for me since it lets you play on the go (and has touchscreen support) and at home when docked on a TV. It also supports the Nintendo Switch Online cloud save backup if you own a Switch Lite and a regular Switch and play on both.

Guardian of Rebirth is the best otome game available on Nintendo Switch right now. While Nintendo’s hybrid console has been slowly becoming a fantastic place to experience visual novels, it is great to see Aksys Games bring the top tier otome games starting with a great introduction to the genre in the form of Code: Realize – Guardian of Rebirth. I can’t wait to play Collar x Malice and more from Aksys Games again when more otome releases from them start hitting Nintendo Switch in the near future.

Code: Realize ~Guardian of Rebirth~is the best otome game you can play on Nintendo Switch and one of the better visual novels available on Nintendo's hybrid system.