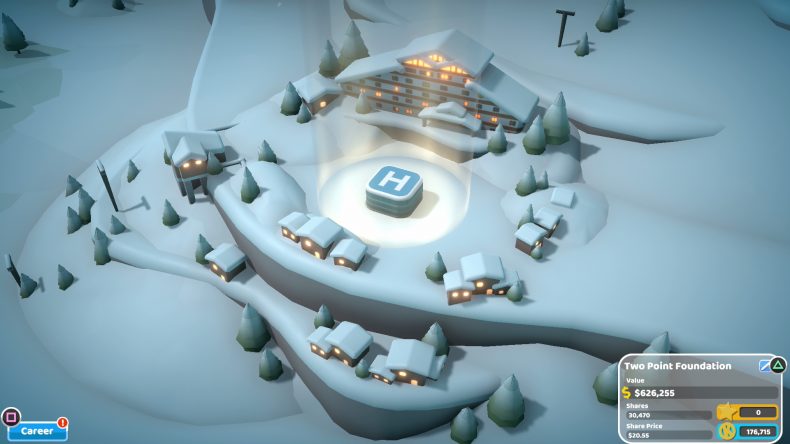 It’s rather wonderful to see SEGA back at the very top of its game. Sure, it may have taken lots of Total War games, the re-release of two stone-cold ten-year old classics, a belter in Football Manager 2019, but it’s the Switch ports that are making the headlines, and Two Point Hospital is no different in that respect.

Released back in 2018, Two Point Hospital wears its influence on its sleeve, but if you don’t get it, it’s a modern day version of Theme Hospital, with all the whimsy and charm which that brings, which makes sense since many of the team worked on that game back in 1997. But my memory clearly plays tricks on me, because I don’t remember even Theme Hospital being this charming. Getting a Jest Infection means you need to de-clown a patient, while being “light headed” means removing a light bulb from your ill-customers and replacing it with, well, a human head and, combined with the colourful nature and cartoon aesthetic, Two Point Hospital really is a delight to play. As the game progresses you’ll get into the nitty gritty of how your hospital is run, adding air-con, changing the room colours, and just generally being a good hospital administrator. Remember: pay your loans back! Or better yet, don’t be terrible financially and get into debt in the first place. Yes. But all of the machinations of the game are things we’ve covered in our PC and other console reviews; you’re here for the Switch details. This version, then, contains all the DLC so far, but doesn’t include the Sandbox Mode or The Superbug Initiative, but both are being added as a free update about a month after it launches. If that matters hugely to you, by all means wait until then to pick the game up. What you’ve got here, otherwise, is a good-looking version of Two Point Hospital that runs really well. The only time you’d even notice you were on a less powerful console is when you save, as there’s a slight delay, but even that is apparently being worked on.

I had a look at the PC version to compare; which may seem a little unfair. Honestly, there’s not a huge amount in it. This is a management game, so it’s not going to blow your socks off with how it looks. Despite a lower resolution appearance overall, the game really does look absolutely fine – there’s nothing to worry about with this Switch port in that department. There will be some that will be waiting to hear whether it has touch-screen support, and it doesn’t. At first, I was a little saddened by the lack of touch-screen controls, but I’m really not sure they’d work here. The controls are intuitive (as they are on PS4 and Xbox One), but there’s simply so much going on in the game once you get going that pinching to zoom in and touching where you want to place items would be a bit of a pain. Would it be nice to have the option? Sure, options are always good. Do I think I’d use if it was here? Actually, no. One of the main issues I have with the game overall is the imprecise nature of placing items in rooms and on the hospital floor. It’s a nightmare if you like things “just so”, because it’s quite hard to, for example, create your perfectly symmetrical waiting room benches as the grid items snap to feels slightly bigger than the items it was designed for. That said, it feels intentional, to make the game easy to play for simply anyone who chooses to.

And that’s the thing about Two Point Hospital, really, it’s just so welcoming and nice. Not only does it feel at home at console, with care and attention taken to make the controls feel right, but it feels like a warm hug among all the brown shooters hitting our consoles all the time. Don’t get me wrong, I love me some shooty-bang-bang games with the best of ’em, but sometimes it’s good to take care of others in a cartoon world where they even took the time to pixelate out someone doing a number two in the bathroom. Because after all, isn’t that what we all want? Two Point Hospital on console was well worth the wait, and you can buy the Switch version with confidence, and that’s the doctor’s orders.

Can get complicated quickly
No touch-screen controls

Two Point Hospital on console was well worth the wait, and you can buy the Switch version with confidence, and that's the doctor's orders.