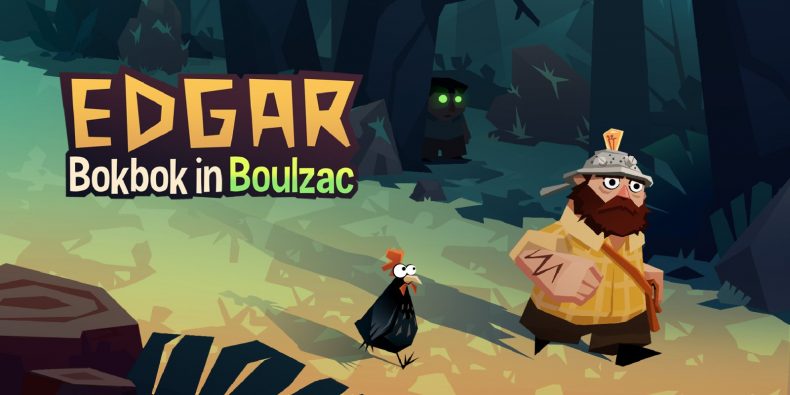 Looking through history will throw up plenty of examples of a hero. They come in various shapes and sizes, in various ranges and reaches of heroism. From the dizzying highs of Joan of Arc or Boudica, to the everyday hero you hear about nowadays like a firefighter rescuing someone from a burning building.

Enter the newest hero for 2020: Edgar. The unlikeliest of heroes, a squash farmer who considers himself an outcast and prefers to keep to himself, along with his chicken companion Precious, in La Poule Noire’s new point and click adventure, Edgar: Bokbok in Boulzac.

The game begins showing you Edgar’s simple open plan cottage, starting the day thinking about breakfast and going through the daily routine of picking and planting squash. Unfortunately, disaster strikes, which pushes Edgar outside his comfort zone and onto a path of adventure in the nearby town of Boulzac to find some elusive Razidium – the one thing needed to power his machine that keeps those pesky bugs out of the squash patch. Edgar: Bokbok in Boulzac is a simple point and click style adventure with an interesting story full of nonsensical humour and random, memorable characters featured throughout. One example of this type of humor is Edgar referring to a bald character’s skull as being “open air”. This may lose something when it’s out of context but trust me, it’s pretty funny.

La Poule Noire has done a really good job story-wise and even though the game is short, lasting around 5 hours, there is a lot going on without it ever feeling overwhelming. I don’t want to spoil the story too much but it deals with a lot more than squash farming. It takes some dark, twisting turns filled with adventure, peril and an ending that I feel was perfect for Edgar and Precious.

As for the actual town of Boulzac, you’re free to wander but the story keeps things pretty linear. By that I mean that you can talk to the Boulzacians (not the official name but the one I’m giving them), but the conversations will be exhausted until after you complete the next story section. It does add more depth to Boulzac and its inhabitants, making the town feel more alive and interactive. Having chats with the residents helps flesh out their individuality and personalities, with some residents referencing others, further creating more of a backstory. I mentioned earlier that Bokbok in Boulzac lasts around the five hour mark but this could possibly be done in as little as a few hours. It all depends on how deep you want to go into the NPC’s of the world. Everyone has something to say, with most of it being interesting and worth a read. Sometimes it’ll be beneficial information, other times not but it’s all part of attempting to bring the village to life. Most of the time you can’t revisit the conversation so you’ll need to pay attention to what’s being said.

An aspect I did like was the speech choice options. Sometimes it’s clear which option to choose to take the story forward, but if the choice is a little vague you have the option of talking to the NPC again to choose a different option. It saves needing to mull over a decision for too long or worry about trying to remember what you chose last time on a new playthrough.

I need to mention the art style in Bokbok in Boulzac as it is beautiful. It’s a colourful, rough around the edges style that seems to just fit Edgar’s personality perfectly. Unfortunately I had an issue with the text appearing on screen. A few times when I pressed a button to go to the next speech box the boxes would stack making the next set of text illegible. The only fix was to quit to the menu which took me out of the flow. However, that was the only issue I happened to come across and everything else worked very smoothly. There was a nice addition to Bokbok in Boulzac in the form of a night and day cycle with changing weather. Unless you’re at a section of the story that requires it to be night or day, the scene will change from day to night and sometimes change the weather from dry to raining. There’s no other times or weather apart from that bit the fact it’s included and gives a sense of time passing while you play is a nice touch.

If you’re looking for something a little different and original then Edgar: Bokbok in Boulzac is definitely one for you. It has a good heart, great humour, and a lovely art style with a new hero you can’t help but like. Nothing in this is too taxing so you won’t be spending hours trying to figure a certain section or be stuck against overpowered enemies, mainly because there’s nothing like that here. Bokbok in Boulzac is a funny, laid back, story-driven game that you should all give a try.

La Poule Noire have done a fantastic job with Edgar: Bokbok in Boulzac. It's a funny, feel good time of a game that doesn't take itself too seriously but delivers an enjoyable story filled with likeable characters and beautiful artwork. Edgar: Bokbok in Boulzac does a good job in introducing a humble new hero that everyone will enjoy.