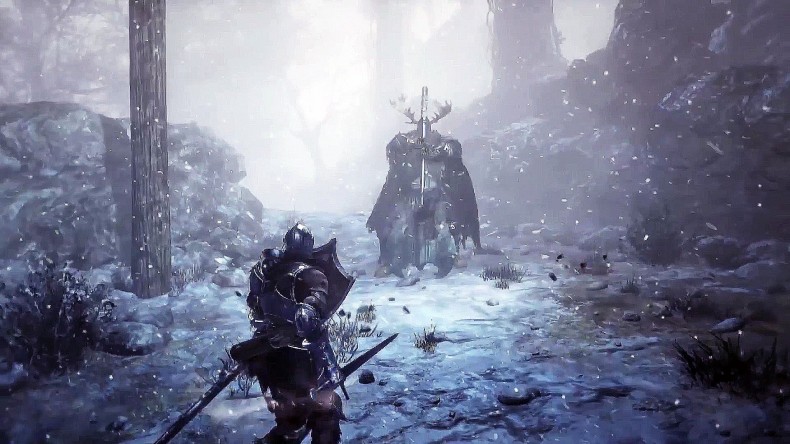 The first expansion for Dark Souls III, Ashes of Ariandel, takes place in a frozen expanse of rot and fear. Featuring new enemies, as well as weapons, armour sets, spells and items, it’s a decent enough expansion, if a little short.

The world of Ariandel is contained within a painting, strongly reminiscent of the Painted World of Ariamis that you stumble across in Dark Souls 1. It has a fairly innocuous start, with the access to the world positioned about midway through the main storyline of the game at the Cathedral of the Deep bonfire. There you must speak with an NPC who shows you a scrap of the painting which, once touched, draws you into the world.

At first glance the DLC seems sizeable, helped in part by an open-spaced first area and the various branching routes you can choose to follow. However, a couple of hours into Ashes of Ariandel you soon realise that everything you can see on the horizon is the extent of the world. The enemy types are satisfying, and some pose a real challenge. The Millwood Knights are huge, hulking beasts that smash their weapons into the ground causing a localised tremor that will interrupt your block and devastate your health bar if you are not quick enough. The wolves, while easy to deal with one on one, will howl and summon more and you can quickly find yourself overwhelmed by them. And elsewhere there are the Corvian Knights, large crow-like creatures that are absolutely brutal and relentless and will be sure to challenge you the first time you meet them.

Each area the world of Ariandel presents to you feels unique enough to provide interest; there is the snowy landscape at the beginning, a rotted settlement and an agonising descent into the lower reaches of the world via the gnarled roots of an enormous, ancient tree. But there isn’t enough to explore in each of the areas and ultimately they feel like tasters of something that could have been bigger and more involving. Bonfires are placed liberally around the world, and while normally I am not one to complain about the abundance of respite spots in a game that I find tough to play, they do feel a little easily spaced. There are two, for example, that are placed very near to each other with no enemies in between them at all. The placement becomes clear as you explore the DLC a little further, but I think the positioning is indicative of how small the world of Ariandel actually is.

Souls games are all about the bosses, and again I feel Ashes of Ariandel comes up a little short in this area too. There is only one main boss and an optional boss which, once killed, drops an item that opens up the PvP element of the DLC. Both bosses provide a considerable challenge with a number of different stages to each. Opinion on the main story boss will no doubt be divisive, but for me it became an exercise in endurance rather than anything else.

Depending on what you enjoy about Souls games, the PvP arena in Ashes of Ariandel may well add more content for you to enjoy. There are plenty of modifiers to set, including the number of players and whether you can heal in combat. The arena appears to be set in the Kiln of the Flame and there are hints within the UI that more arenas may be forthcoming. You access the arena through the Firelink Shrine and matchmaking is fairly swift. Unlike invasions, there is very little to lose here other than your pride; rather it is a good opportunity to try out some of the weapons and gear you have found along your earlier travels.

Ashes of Ariandel is a fairly disappointing first DLC for the third game in the Dark Souls series. It feels like a taster of something that could have been bigger. The main boss is a challenging fight that ends and leads ultimately to nothing, which after the difficulty of the fight feels anti-climactic. The PvP arena adds more content, but if you’re not into duelling with other players there is very little to keep you engaged past the couple of hours or so it takes to complete. Exploration to locate items will extend the length, but ultimately the world of Ariandel feels like an optional area that you may well skip on New Game Plus as there isn’t much to offer.

Too many bonfires lessens the dread
Ultimately the area is forgettable

The final boss fight is challenging and worth the DLC, while the PvP arena will keep fans busy for some time, but ultimately the world of Ariandel is bleakly beautiful if unsatisfying.