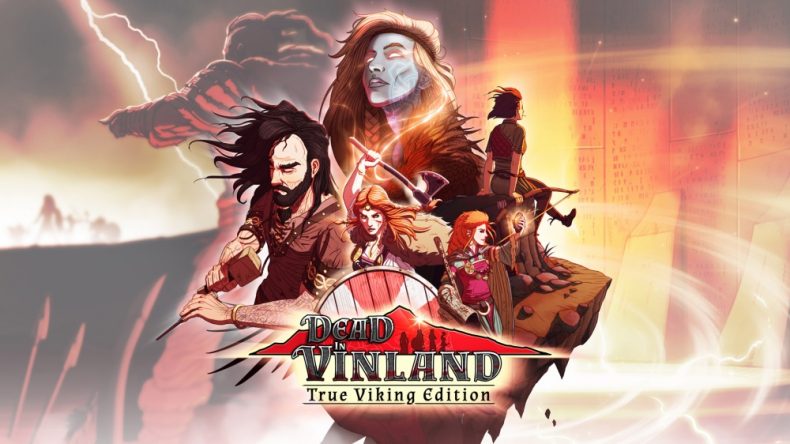 Survival games come in all forms, but I don’t think I’ve ever played a turn-based survival game before. Dead in Vinland sees you crash on an island with nothing to your name. Eirik and his family were escaping a group of men known as “Thor’s Hammer” when their house was burned down, and during a horrible storm you found yourself shipwrecked on a magical island. It’s a constant battle between life and death as you hunt for food and water, fight off the local barbarians, and build whatever you can to ensure you don’t shuffle off this mortal coil. Many of my days were spent struggling to support the survivors, but hope always managed to shine through the cracks of failure, even when it seemed I was close to certain death.

I won’t say it’s enjoyable as such, but there were many times I felt an overwhelming sense of pride as I found a new way to acquire materials, or explored more of the island to bring home vital items to keep my family alive. Not only are you constantly battling your stats to make sure you don’t die, but there’re threats – such as Bjorn and his savage tribe – that you’ll have to battle to ensure survival.

The fundamentals of Dead in Vinland include securing a feast for your family at nighttime, as well as purified water, and also wood so that you can build things to help produce resources faster and keep your party from becoming depressed, sick, and fatigued. This can be done in a number of ways, and every member of your party has certain abilities that make every action easier depending on who you assign to which tasks. Finding timber is essential to your survival because it helps to keep your fire burning. You use your fire to help purify the water, cook the food, and keep your party warm in the night. There’re three stages to the day. When you wake up in the morning, you’re given a brief guide to the day and what weather you’re likely to have. If it’s nice and sunny you’ll be fine, but a storm can damage your camp which will mean you’ll have to eat into your supplies to help maintain them. Food can also become damaged which adds another frustration to your never-ending journey of woes. The morning and afternoon are where you can scavenge, explore the world, and craft, and at the end of each phase you’ll find out what you’ve found and what effect it’s had on your character. Finally, the night is where you’ll gather in your tent and dish out the food and water.

You’ll also use this time to chat to each other, and more of the story is unveiled. It’s where you learn more about each character’s backstories, and where bonding with each other either happens or doesn’t. Certain dialogue choices can damage relationships or make them stronger, but each response isn’t always clear leaving you to make mistakes without even knowing what it means. The night will also be where any lingering affects on you will go away depending on the duration you’ve had them for. If you’ve been poisoned or have fallen sick after eating something dodgy, you’ll know if you’ve recovered.

Each character has a set of physical and mental traits, such as strength, stealth, intelligence, and wisdom. On top of that, there’re other abilities you can acquire that make certain tasks easier. Some are better at fishing and cooking, whilst others are better at harvesting crops and chopping down trees for timber. Collecting basic materials can be used to craft work stations where you can cook raw meats and break down wood at the lumber yard. Each action has an affect on each character’s well-being, and this is where Dead in Vinland can be gruelling if you’re not constantly managing your party. You can get injured both in battle and out exploring, fatigue can set in if you’re not resting sufficiently, and if you eat something bad you can become sick. You also need to make sure you’re eating and drinking properly or else you’ll soon find yourself in an early grave.

Depression is probably the biggest killer. If you upset someone by something you’ve said, or if you’ve not eaten, you’re depression will grow. I found it the hardest thing to manage as it’s always getting worse and does so through a multitude of different ways. When any of the stats reach 100, you’ll die and the game will end. It took quite a few attempts to last longer than a few weeks, but once I got in the swing of it I rather enjoyed my time on the island, as much as you can when you’re constantly knocking on death’s door.

I really enjoyed the fighting in Dead in Vinland. It feels similar to Darkest Dungeon, with a bit of The Banner Saga thrown in for good measure. Turn-based combat goes down much like any other game like it. There’re four sections on the battlefield. Characters that use axes and swords benefit from the melee zones, whilst witches and archers are better in the long range areas. You can use buffs to help you evade attacks or increase attack and defense statistics, and certain characters have a wide range of attacks that can do plenty of damage when you land them. There are times when you’ll miss your target, and this becomes frustrating because it feels like it can often be unpredictable. Some soldiers are hard as nails, and if you lose you can become injured which has a lasting affect when you head back to camp. As mentioned earlier, Bjorn is the local arsehole that requires a tribute from you each week, and if you can’t provide the supplies to him, well, it’s not good. At least you get to fight his guards and find a way to get some form of revenge.

Dead in Vinland is a challenging survival that often leaves you struggling to stay alive. It’s frustrating and laborious at times, but when it clicks and you learn how to overcome the most difficult of challenges, you’re offered glimmers of hope and moments of joy that make you keep playing. The characters are interesting – even the annoying teenager Kari – and the art style is very pretty. If you fancy a different take on survival and want one hell of a challenge, this is one you should definitely play.

Whilst Dead in Vinland is a decent survival game, it can be punishing if you're not constantly managing every facet of your party.