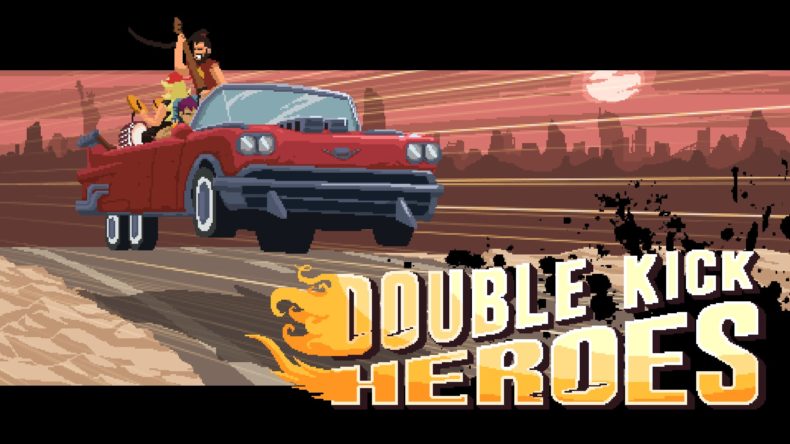 In the days before Guitar Hero and Singstar, rhythm games were not only incredibly niche, but also pretty outlandish. To get your musical gaming fix in the 90s, you’d be saving the world from aliens in Space Channel 5, or impressing your sunflower love interest by learning karate through the medium of rap in Parappa the Rapper. Over the years I’ve amassed quite the collection of oddities, and will often bewilder friends by loading up one of these melodious masterpieces. Double Kick Heroes absolutely fits alongside these curios of the past, with its unique blend of zombie survival and hard rock.

In the apocalyptic world of Double Kick Heroes, a ragtag group of musicians are surviving the only way they know how: by playing rocking tunes. They manage to implement this unique method of survival by rigging their muscle car with guns and explosives that fire when a note is hit. As you travel through the barren land of the dead, you’ll be tasked with hitting as many notes as possible to ensure the constant stream of zombies, undead sharks and bosses are blown away with the power of rock.

You begin your adventure with a simple pistol, and depending on which button you press to hit the note it will fire above or below your car. This means as you’re watching the bottom of the screen to hit the note in time with the music, you’ll also need to pay attention to where the zombies are approaching from. You’re taught pretty early on that it often makes sense to alternate shots between the lanes of zombies, as it’s not easy to focus on the horde of undead when you’re trying to nail a tricky guitar solo. 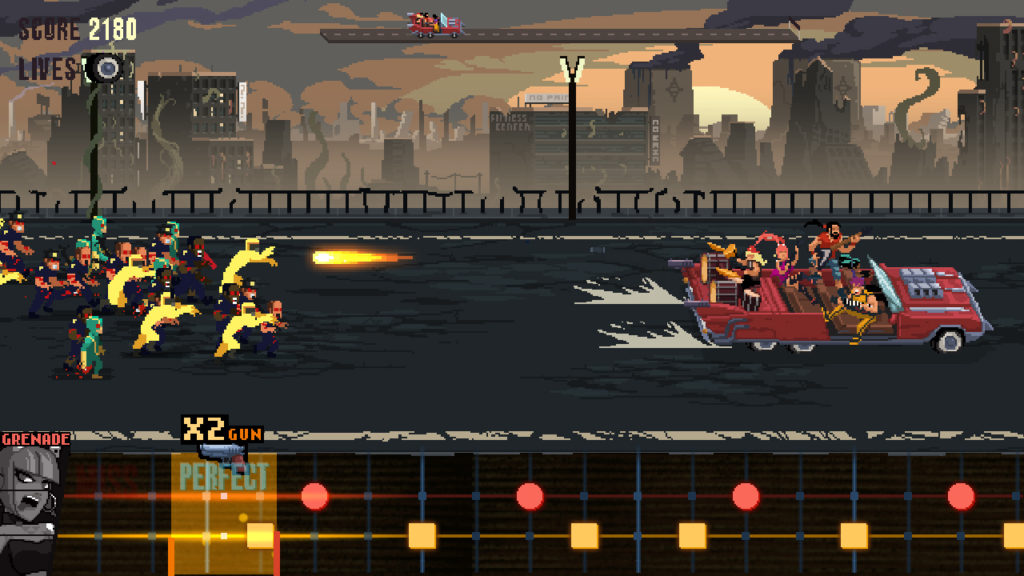 You’ll have much more than just handguns to blast away foes as you progress. You get a grenade meter that fills up when you hit drum notes, a sniper for focusing on bigger tougher foes, and your pistol soon gains the ability to change into more powerful weaponry if you hit enough notes in a row. It takes a lot of concentration to hit multiple sets of notes, fire in the appropriate lane, and eventually even dodge incoming attacks all at once. The satisfaction in mastering these systems and aceing your favourite song however, makes it all worth while.

A great soundtrack is obviously hugely important in a rhythm game, and thankfully the tunes in Double Kick Heroes do not disappoint. There’s an incredibly varied selection of tracks from a host of lesser known bands, with genres to please fans of all tastes. From Death Metal to Grindcore, you’ll be blasting zombies along to a smorgasbord of guitar filled tunes. I especially appreciated having no prior experience of any of the bands, as it just meant I had a lot of talented people to look into once the dead were back in the ground.

For those who just want to get stuck into the game, Arcade Mode simply teaches you how to play and let’s you get on with the zombie murder, but if you want the full apocalyptic experience the Story Mode is where you’ll find it. Although you’ll be playing the same songs this way, it’s framed with a story of a mysterious cult and a meeting with a rock legend or two. The characters are all very charming, and the narrative breaks between jam sessions were appreciated. 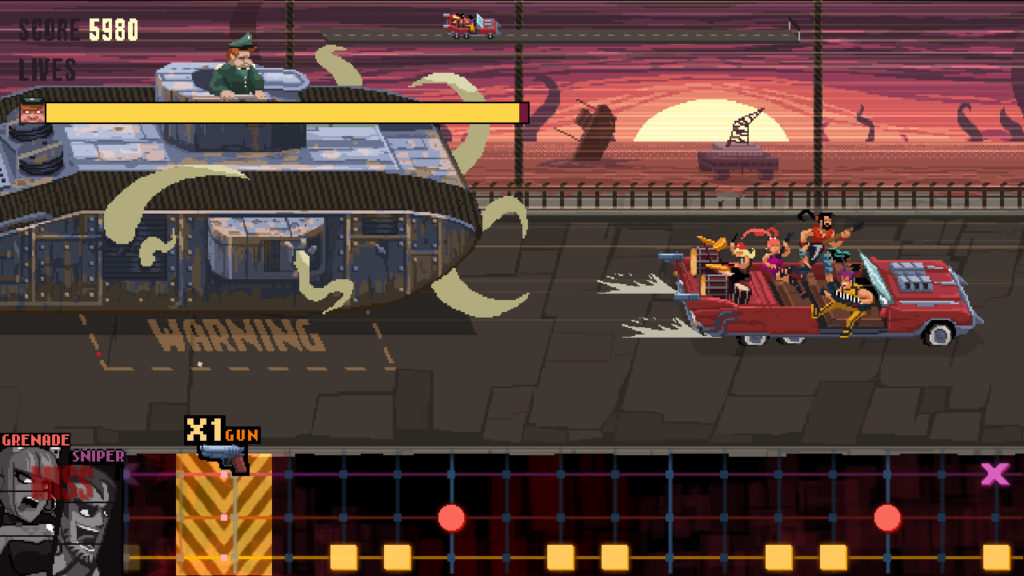 If you’re able to make it through every last challenging song in the campaign, you’ll find plenty of reasons to keep playing. To start with there are 5 difficulty levels, which get increasingly hellish. I was able to cope with the middle difficulty (Metal) but anything higher is particularly brutal.

There’s also Hellgate mode, where you’ll find a bunch of bonus songs to blast zombies to. Finally there’s the Endless mode called Fury Road, where you’ll find a daily challenge comprised of multiple back to back tracks of increasing difficulty, as well as a more randomised endless mode. The Switch version of the game is particularly impressive. Nothing on the screen is too small to play in Handheld, and there is not a single technical issue present. For my money, it’s the ideal way to play Double Kick Heroes.

As unique a game as it is, Double Kick Heroes isn’t without its problems. Due to the relative simplicity of only having to hit notes on three tracks at once, there’s a tendancy for the difficulty of tougher tracks to rely on hitting notes in very quick succession. There were times where I legitimately couldn’t tap the button fast enough in time with the music, and it didn’t feel like my lack of skill was the issue when failing these levels. My other issue is more of an inconvenience, and relates to playing through on different difficulty levels. Even if you’ve beaten the game on an easier difficulty, you have to play all the songs in order when you change to the next difficulty up. There’s no way to jump into your favourite song without playing through the entire game again, and it would’ve been nice if you could just jump into any tune when you’ve beaten it before on easy.

Double Kick Heroes is an incredibly unique rhythm game, packed with great songs and a lot of challenge. Surviving hordes of zombies with the power of rock is very satisfying, and with plenty of difficulty options you’ll never be short a challenge. If you’re able to handle the fast notes, you’ll find Double Kick Heroes full of varied content and undead brains to sink your teeth into.

A unique blend of zombie survival and rhythm gameplay
A varied soundtrack, with something for all musical tastes
The apocalyptic theme manages to be really charming
Tons of content

An incredibly unique rhythm game, Double Kick Heroes is satisfying to play and packed full of great tunes and tons of content